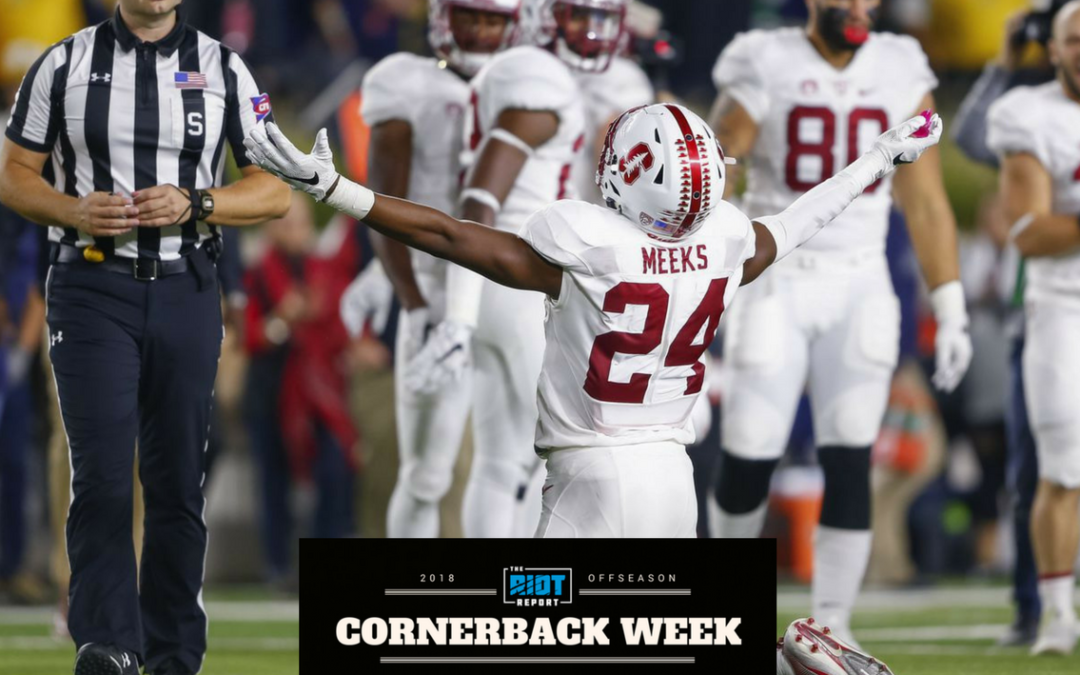 Each week this offseason, we’ll be focusing on one position and how the Panthers may choose to address their needs; whether they’re in the market for an upgrade at starter or just a reliable backup, every player on the 53-man roster is going to be important in 2018.

This is Cornerback Week.

The Panthers could go a lot of ways early on in the 2018 draft, but one area that is would be something of a surprise to see them target early on is cornerback. However, once the draft enters the final day, all bets are off, with teams largely looking to take whoever they feel is the best player available; with that in mind, somebody who the Panthers could have some interest in come the later rounds in Stanford cornerback Quenton Meeks.

Meeks certainly fits the mold in terms of what the Panthers have historically looked for in their outside corners; with Steve Wilks moving to Arizona, it would not be a surprise to see the Panthers move back to a more zone-focused defensive scheme, the very scheme which Bradberry and Worley were drafted to suit. Meeks is another corner in the mold, listed as 6’2 and a shade under 200 pounds; like both of the Panthers starters, he is unlikely to wow anybody with his 40 time. As with Bradberry and Worley then, his NFL future will largely depend upon the scheme he ends up playing in, but why should he interest the Panthers?

Given the unpredictability when projecting corners to the NFL, one thing teams want to see in a prospect is upside; to put it another way, there had better be a reward to warrant the risk. With Meeks, that upside is that of having the length and physicality to deal with the ever-increasing size of NFL receivers, while also have the ball skills and instincts in zone to generate the turnovers upon which much of what the Panthers do defensively depends. Of course, even for zone corners, there is a need to be able to run with receivers vertically.

On both of these plays, Meeks shows the requisite speed to run in stride with his receiver. He is certainly not going to be breaking any combine records come March, but as with Worley and Bradberry, receivers aren’t likely be be able to simply run away from him. What this deep speed allows Meeks to do is to sit on underneath routes in zone, and he shows a decent ability to come out of his backpedal and break back towards the ball. On both of the following plays, he shows an ability to break smoothly on his receiver:

He also shows an ability to maintain downfield coverage throughout his backpedal, allowing him to shadow receivers effectively down the field without having to turn his back to the quarterback, a useful skill in any defense that heavily utilizes Cover 3.

While he does allow a reception on the following play, he is able to stay with his receiver vertically during his backpedal and is able to break out of it smoothly to come back to the ball, he is only beaten by a very well-timed throw.

The major issue with his zone coverage; something the Panthers and other teams will likely want to examine during the draft buildup is his ability to flip his hips in his backpedal. While he comes out of his backpedal well, when asked to change direction while maintaining his backpedal, he sometimes found himself getting twisted around, such as on the following completion:

While this is certainly something to keep an eye on during the combine, his combination of size and fluidity is unusual and would be a good fit for the Panthers’ presumed defensive scheme. Add to that his ball skills and instincts in zone and he could add depth on the outside with the potential to challenge Worley for a starting spot down the road. Here, he shows his ability to locate the misthrown ball and is able to come down with the interception:

And here, he shows an even more valuable trait, the ability to recognize route concepts and to make a break on the ball to come up with the pick six:

NFL defenses are far more complicated than those run by almost every college, and many NFL schemes look for corners to be able to recognize route combinations in this way. Even if Meeks is not a fully polished NFL corner at this stage, he at least shows the intelligence and instincts required to develop further in this area. As Dave Gettleman talked about following the 2016 draft, teams are not drafting NFL-ready corners anymore, and so the ability to be taught becomes a highly significant one.

The final thing to find positive about Meeks’ game is his physicality. While corners are often tasked with being run defenders in college, Meeks showed a willingness and ability to bring ball carriers down in the open field.

All of this shows why the Panthers should be interested in Meeks come the later rounds, but what is there that might hold them back from pulling the trigger?

It wouldn’t be fair to say that Meeks is completely incapable in man coverage, but rather that he is unlikely to be able to consistently cover the better receivers in this way at the NFL level. On both of the following plays, he shows at least the basic ability to follow his man through his route:

However, where he really struggles, and this has also been true for Worley and Bradberry though possibly to a lesser degree, is when he is matched up against smaller quicker receivers. Here, the change of direction that looked questionable in zone coverage is downright debilitating. On the following play, he is simply unable to stay with his man after the change of direction leading to an easy touchdown.

Any defense that would ask Meeks to routinely cover smaller receivers in man coverage would likely find him completely unsuitable. It is possible to find more plays of this nature without much work on his college tape, but the theme is the same throughout. Rapid changes in direction are not Meeks’ strength. His suitability for the Panthers will therefore likely depend upon whether they look to revert back to a more zone-heavy scheme or if they continue to insist upon playing quite so much man coverage as they did in the past season under Steve Wilks.

Summary: “Lengthy Zone Corner with ball skills who has some issues with short-area agility; his NFL future  will depend as much on where he lands as anything.”