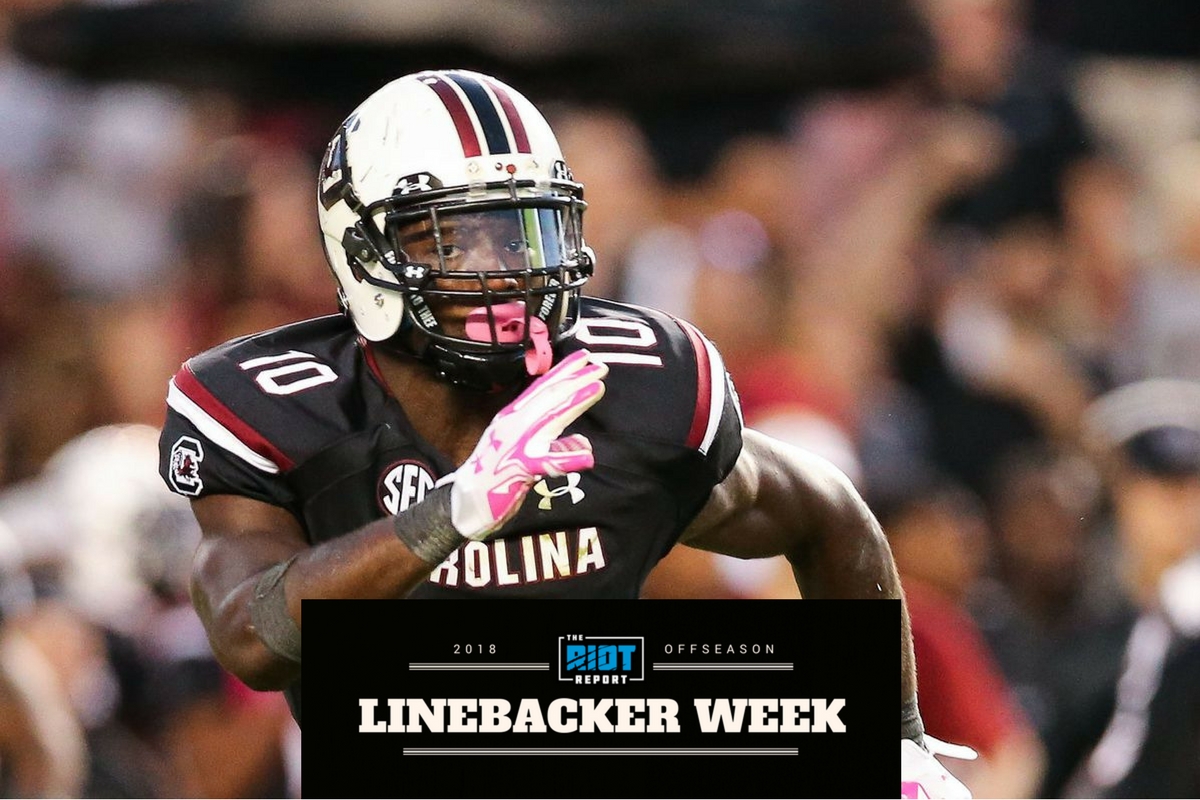 Each week this offseason, we’ll be focusing on one position and how the Panthers may choose to address their needs; whether they’re in the market for an upgrade at starter or just a reliable backup, every player on the 53-man roster is going to be important in 2018.

This is Linebacker Week.

Linebacker is unlikely to be towards the top of the Panthers’ to-do list for the 2018 season, but while Thomas Davis and Shaq Thompson look to be some of the best starting linebackers in the NFL, with Davis’ pending retirement and the lack of depth behind the pair, outside linebacker could be a late-round option for the Panthers. At this late stage in the draft, anybody the Panthers draft will have faults, but what Marty Hurney and the coaching staff will be looking for is a prospect who can offer immediate depth with enough upside to hope that they might be able to contribute in a more significant way down the road.

In both the run and pass games, the mental aspect of a linebacker’s role is often underappreciated; while indications of a player’s ability in this area can be gleaned from tape, this article will not be able to provide much insight into what can only be deduced from player interviews and conversations with coaches. Instead, the focus will be on athletic suitability and core technique work; in terms of run defense, linebackers need to demonstrate both the speed to cover the edges of the field as well as the strength to take on blockers.

On the following screen, Moore shows both the awareness to read the play correctly and the speed and tackling ability to chase the ball down and make the tackle. For reference, Moore wears #10:

While Moore is unlikely to run in the 4.5s at the combine, he shows enough speed to cover the field, though where he will need to improve in the NFL is in his ability to take on blockers head on; when asked to line up and stuff blocks, he demonstrated a lack of power that is somewhat to be expected of a 218 lbs linebacker. Given some time in an NFL weight room, he should be expected to improve in this area, but plays like the following are less than ideal:

However, what Moore does show the ability to do is to make blockers miss in the open space. This allows him to sift through traffic without having to directly take-on blockers, such as on the following play:

South Carolina didn’t run a huge amount of man coverage last season, and while this is certainly a skill that Moore will need to develop further, the following play at least shows the lateral agility that will be useful in this area.

However, they did run a lot of zone coverage, and this is an area where Moore really excelled. On a fundamental level, he shows the speed to drop into deeper zones while keeping pace with receivers, such as on the following play:

He also shows the mental skills that are important in zone-heavy schemes: the ability to locate receivers entering and exiting his zone; the ability to follow the quarterback’s eyes to close in on receivers; and the tackling to limit the receiver’s ability to run after the catch. On the following play, he initially drops deeper in order to take away the passes behind his zone; but when he sees the running back coming out of the backfield, he drops down in the zone and is able to make the tackle for a minimal gain:

He also shows some nice nuance in his play, which enables him to be more effective; here he is able to check the tight end down the field in order to prevent a quick pass before dropping off into his assigned zone:

Moore also exhibits good ball skills and awareness of where the ball in is coverage. On the first play, he shows both the coordination and timing to knock the ball away at the last minute:

He also showed a repeated ability to pick passes off in college, forcing a number of interceptions throughout his college career, such as the following two plays:

These interceptions show not just the ability to catch the ball, but also the awareness to follow the ball in coverage and to jump passes; ball hawking ability like his is fairly innate and will translate to the next level.

The weakest part of Moore’s pass defense is his pass rushing ability, and although he managed 4.5 sacks in college, this is certainly something he will need to work on in the NFL.

While Moore is not a polished, out-of-the-gate, NFL-ready starter straight out of college, he offers enough core skills and upside to merit interest as a late-round pick for a team like the Panthers that need to add some depth at the position.

One Sentence To Make Yourself Sound Smart: “Moore needs to spend some time in the weight room and improve his pass rush, but his coverage ability and innate ballhawk skills might make him a late-round target.”