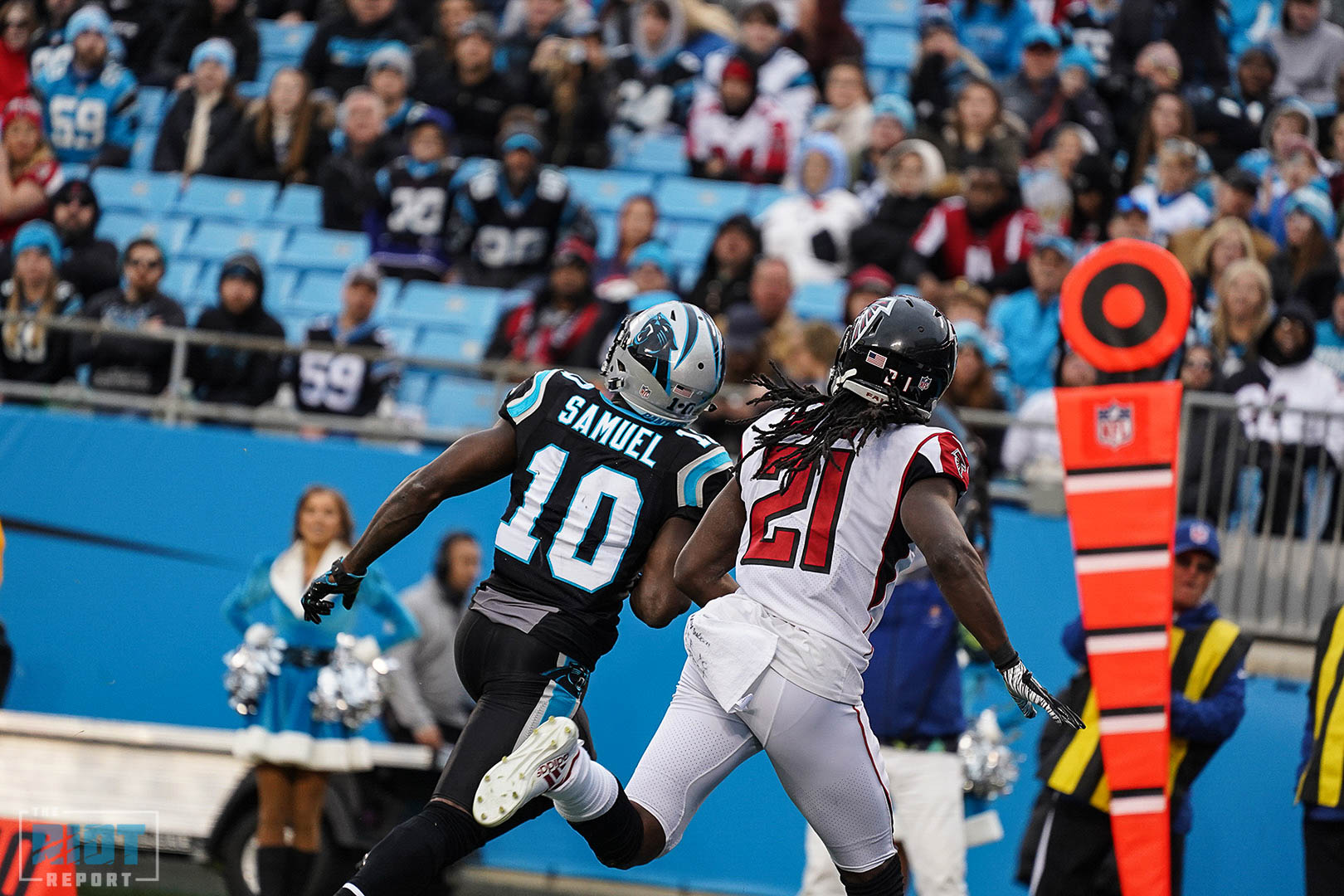 In a game the Panthers could not lose if they wanted to compete for a playoff spot, they didn’t just lose, they were embarrassed in almost every facet of the game by a 2-7 division rival at home as they fell to the Atlanta Falcons STATS at Bank of America to fall to 5-5 and perhaps all the way out of playoff contention with six games left in the season.

Here’s how it happened:

Already down 3-0 after the Falcons took their opening drive down for a field goal, it didn’t take long for the Panthers to make their first mistake of the day.

On just their third offensive play of the game, Kyle Allen was hit by Grady Jarrett and Vic Beasley, who blew by the Panthers’ offensive line, forcing the quarterback to make a poor decision as Allen threw an interception to De’Vondre Campbell just over the line of scrimmage. The turnover had the Falcons offense set up with excellent field position as they took over on the Panthers 30-yard line.

Luckily for the Panthers, after a seven play drive that only amounted to 15 total yards, Atlanta kicker Younghoe Koo missed a 38-yard field goal so the turnover didn’t prove too costly – although the defense bailing out the offense on a short field would be a constant theme early for the Panthers.

Already down 3-0, this was definitely not the start Allen needed coming off last weekend’s game against the Green Bay Packers; Carolina has certainly been better this season when Allen has played with a lead – this was the fourth straight game with an interception for the Panthers’ backup quarterback and would be a harbinger of things to come.

Kenjon Barner had two separate stints with the Panthers before landing with the Falcons.

Just housed a punt in his return to Charlotte 🏠

After another failed offensive drive in the first quarter – the Panthers gained only 20 net yards in the first 15 minutes and 17 of them came on the final play of the quarter – Michael Palardy punted 57 yards and former Panthers running back Kenjon Barner caught the boomer over his shoulder, turned and found a seam, running untouched to the end zone for the first punt return touchdown allowed by the Panthers since 2016.

“I had a “motorcade,” as I like to say,” said the former Panther. “Once I caught the ball and came through the middle, I just saw a motorcade ahead of us and they guided me on down. Our guys did a great job of blocking. They always do. They strain for me, and my job is to strain for them.”

The Panthers miserable first quarter would mercifully end with the Panthers down 10-0. But it wouldn’t get better from there.

One of the keys to Kyle Allen leading the Panthers to four straight wins in his first four starts of the season was not making mistakes – through four games, Allen had no interceptions against seven touchdowns. In the four games since, he’s thrown three touchdowns and nine interceptions.

His second of the day against the Falcons looked similar to the back-breaking red zone interception he threw in Green Bay last week. Allen stepped up as the pocket collapsed and it appeared as if he had a lane to run; but instead, he tried to force it into the end zone and Falcons corner Desmond Trufant stepped in front of DJ Moore and kept the Panthers scoreless.

The Falcons came into the game with only two interceptions in their first nine games and hadn’t intercepted a pass since September 15th – they had three in the first half.

Bent, But Not Broken — Yet

Following Kyle Allen’s interception in the end zone, the Falcons offense began the next drive on 20, up 10-0. Ryan and the Atlanta offense had little problem marching down the field and getting into Panthers territory as it took them all but two passes to Julio Jones and Calvin Ridley to get past midfield.

Ryan would finish with 311 yards passing and only ten incompletions on the day.

The Falcons were in the red zone seemingly immediately with an opportunity to go up three scores in the second quarter and it certainly appeared as if they did. However, the Panthers defense would catch a break in the end zone.

On third down, Ryan threw a pass to Russell Gage that was originally called a touchdown on the field. However, after reviewing the play, Gage couldn’t hold on to the ball as Tre Boston knocked it loose as the wide receiver hit the turf. With the play being incomplete on third down, Atlanta had to settle for a 23-yard field goal by Koo. That was significant because the Panthers couldn’t afford to go down three scores in the second quarter, especially with their offense struggling.

But that three score lead would be incoming – as would Allen’s third interception.

In 2015, the Panthers went into Atlanta with a perfect record and left with their only loss of the season – the lasting image of that loss was Falcons wide receiver Julio Jones skying over all-world linebacker Luke Kuechly 50 yards downfield with a safety looking on helplessly. As the first half wound down in Charlotte and the Falcons facing a key third down up by two scores, Panthers fans would see something sickeningly familiar as Matt Ryan heaved a pass downfield to a streaking Jones, who pulled in the over-the-shoulder grab inside the five-yard line with Kuechly in coverage nearly 50 yards from the line of scrimmage.

The third-and-16 would have been converted anyway even if Jones hadn’t hauled it in as Mario Addison was flagged for roughing the passer. A play later, fifth-round pick Qadree Ollison, who hadn’t taken an offensive snap before Sunday in Carolina, plunged in from two yards out for his first career touchdown to put the Panthers down by three scores.

The Panthers’ final drive of the half ended the same way their first one did – with a Kyle Allen interception, this one as he threw inaccurate to D.J. Moore inside the five-yard line. Allen finished the first half with a 32.3 passer rating, which was 45 points lower than Falcons running back Kenjon Barner, who attempted and completed one pass for three yards.

The Panthers would go into halftime down 20-0.

It Wouldn’t Get Any Better

Down 20-0 at the start of the third quarter, the Panthers offense knew they had to get points on their first drive of the second half. Unfortunately, their first drive after halftime looked a lot like the drives in the first half. On the first play of the third quarter, Allen almost threw his fourth interception of the game on a pass intended for D.J. Moore. That was then when the Panthers decided to get the ball in the hands of its best player. McCaffrey touched the ball three straight times on the drive, picking up 47 yards during those plays.

McCaffrey would finish with 191 total yards – 121 of them through the air on 11 catches – the Panthers franchise running back would also set the NFL record for most receptions by a running back in his first three seasons, passing Ladainian Tomlinson.

Then, on 4th-and-5 from the 35-yard line, instead of kicking a field goal, the Panthers decided to go for it – one of five times they would attempt a fourth down conversion. But Adrian Clayborn was able to get past Greg Little – a recurring theme – and sack Allen to end the drive; Clayborn had two sacks and two tackles for loss on the day. The Falcons would take the ball and go 53 yards in 10 plays to put themselves up 26-0 as fans flooded for the exits.

While there were still more than 21 minutes left in the game, no plays mattered after these as the game was over before the clock hit zeroes in the third quarter.