Six Plays That Mattered As The Panthers Beat The Texans 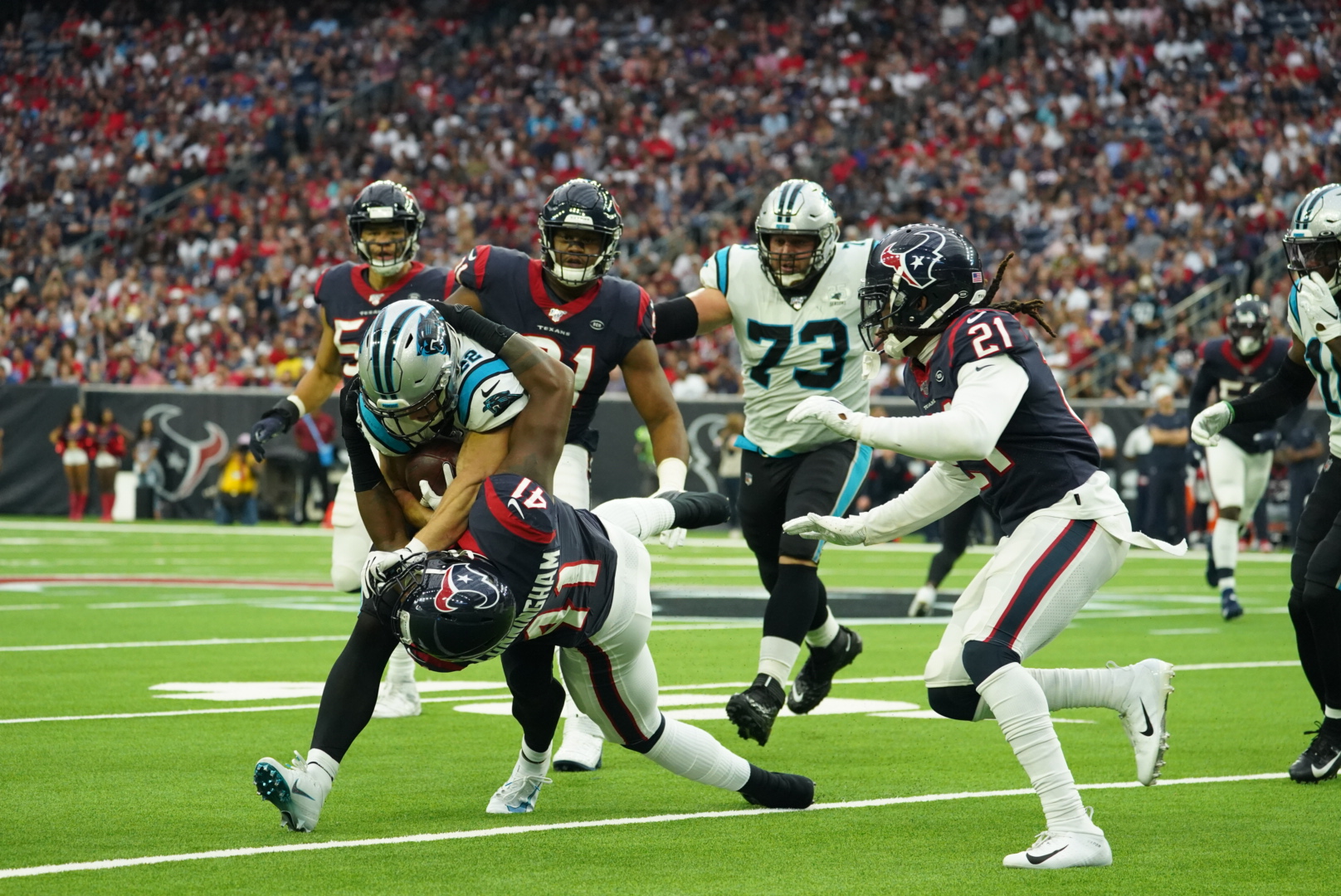 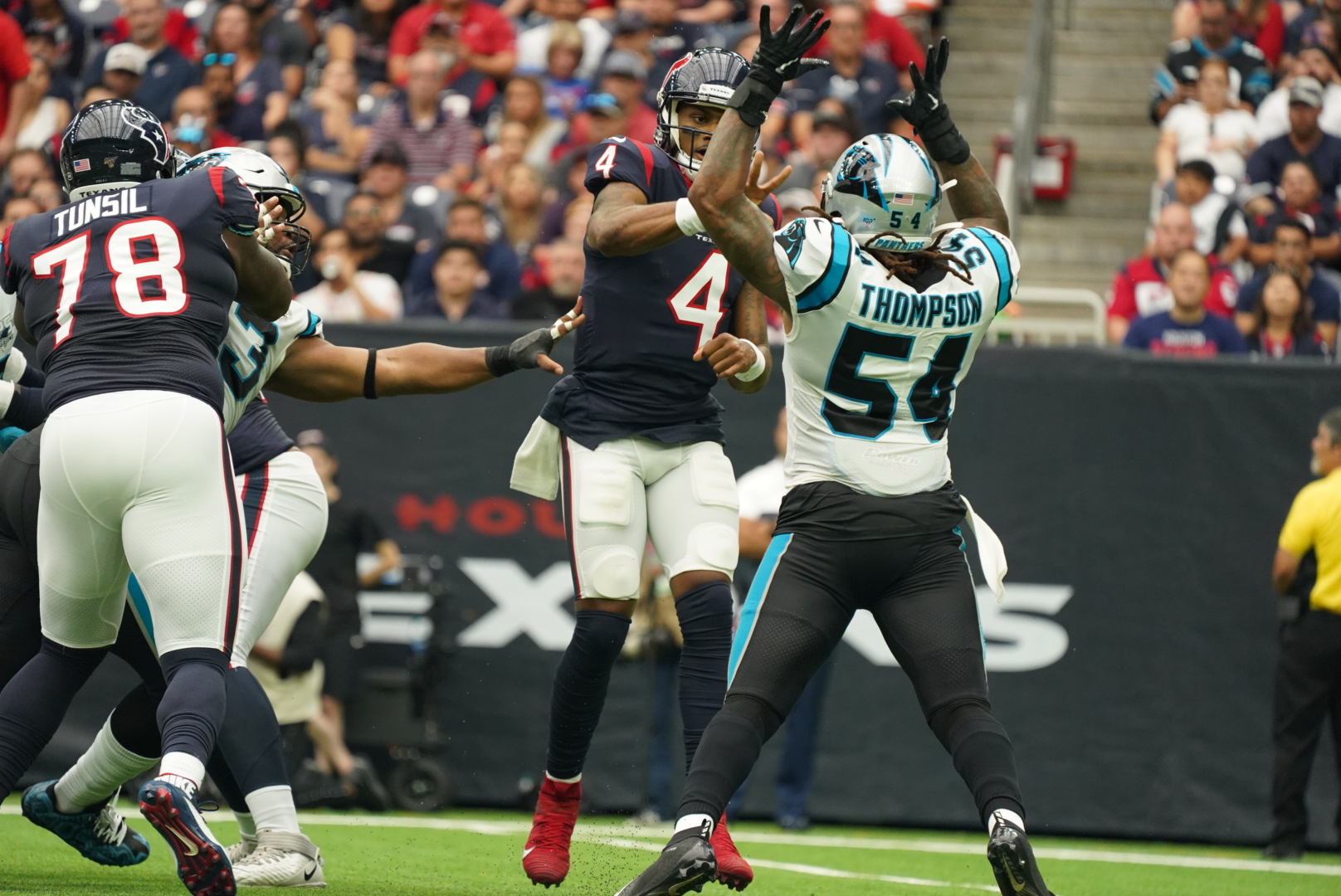 After a fairly uneventful first quarter – the Texans couldn’t take advantage of an early Kyle Allen fumble, which was his first of two in the first half and his third of the season after two last week – the Texans put together a nice drive in the second quarter and it began with a nifty play from Deshaun Watson. The Panthers had been harassing Watson all game, with three sacks and consistent pressure to that point – all of which kept the Texans out of the end zone and limited them to 76 net passing yards in the first 30 minutes – and this third down was no different as Shaq Thompson beat running back Carlos Hyde coming off the edge. But as Thompson went to attack Watson, that left Hyde completely alone on the left side of the field, Watson was able to dump it down to him and Hyde scampered 25 yards to the Texans’ 40-yard line.

The next play, a 40-yard rush by Duke Johnson, put the Texans into field goal range and they would convert their only points of the first half to tie the game at 3.

Cockrell Takes It Away

After Allen’s second of threes fumbles – Allen has fumbled the ball every time he’s been sacked thus far this season – the Texans began a drive on the Panthers side of the 50 and quickly moved into the red zone but a cutesy playcall, a backwards lateral to star wide receiver DeAndre Hopkins who had the option to throw, backfired for Bill O’Brien and the Texans as Ross Cockrell, who got the start with Donte Jackson nursing a groin injury, wasn’t fooled a bit and stepped in front of Carlos Hyde for the veteran corner’s first interception in a Panthers uniform after missing all of last season.

Cockrell returned the ball to the Carolina 46-yard line, which was exactly where the Texans had began their drive. 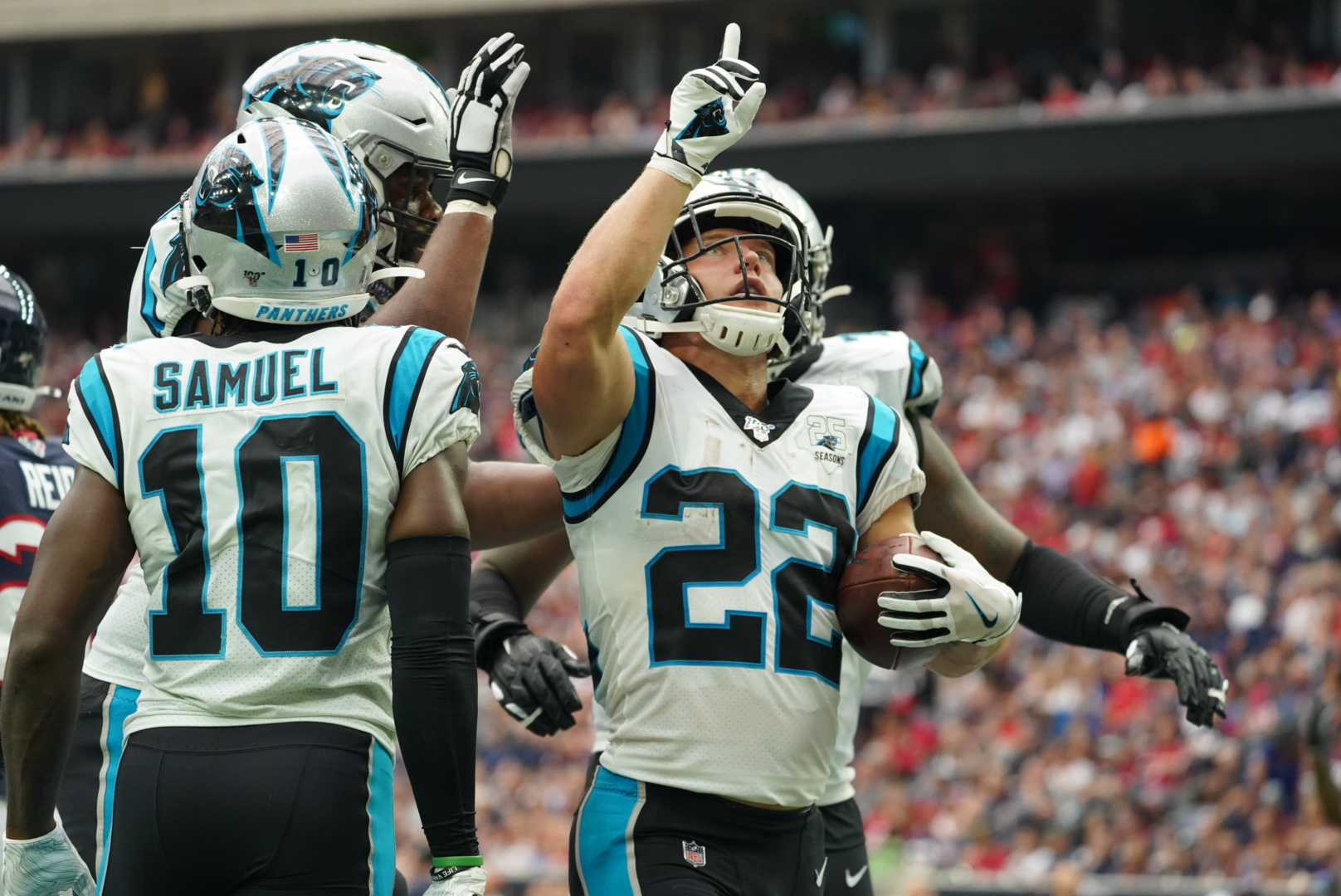 Fantasy owners have gotten their money’s worth out of the Panthers running back thus far this season and that certainly didn’t stop in Houston as the Panthers’ bellcow racked up 113 of the Panthers’ 160 first half yardage, including the only touchdown of the half as he capped off the drive that followed Cockrell’s interception with a three-yard touchdown run to put the Panthers up 10-3 heading into halftime.

The drive was extended with a clutch third-and-4 completion to Jarius Wright – who had a nice game with five catches for 59 yards – that put the Panthers into scoring position.

McCaffrey would finish with 179 yards on 37 touches – the 37 touches were a career high.

JJ Watt in 2019: Still a beast.pic.twitter.com/pzvTsbD8pS

The Panthers knew coming in that limiting the Texans’ pass rush – whether through scheming the ball out of Allen’s hands quickly or leaving extra blockers in to protect – would be incredibly important. Though the Panthers were able to mitigate the rush for the most part, the Texans made it count when they got to Allen. After Whitney Mercilus was able to get around rookie left tackle Greg Little and force a fumble in the second quarter, all-world defensive end JJ Watt poked the ball free from Allen for the quarterback’s third lost fumble of the day.

Four plays later, Deshaun Watson go around the left end for a touchdown to knot the game at 10. The Panthers defense controlled the game through three quarters, holding a Texans offense to 222 total yards through 45 minutes. 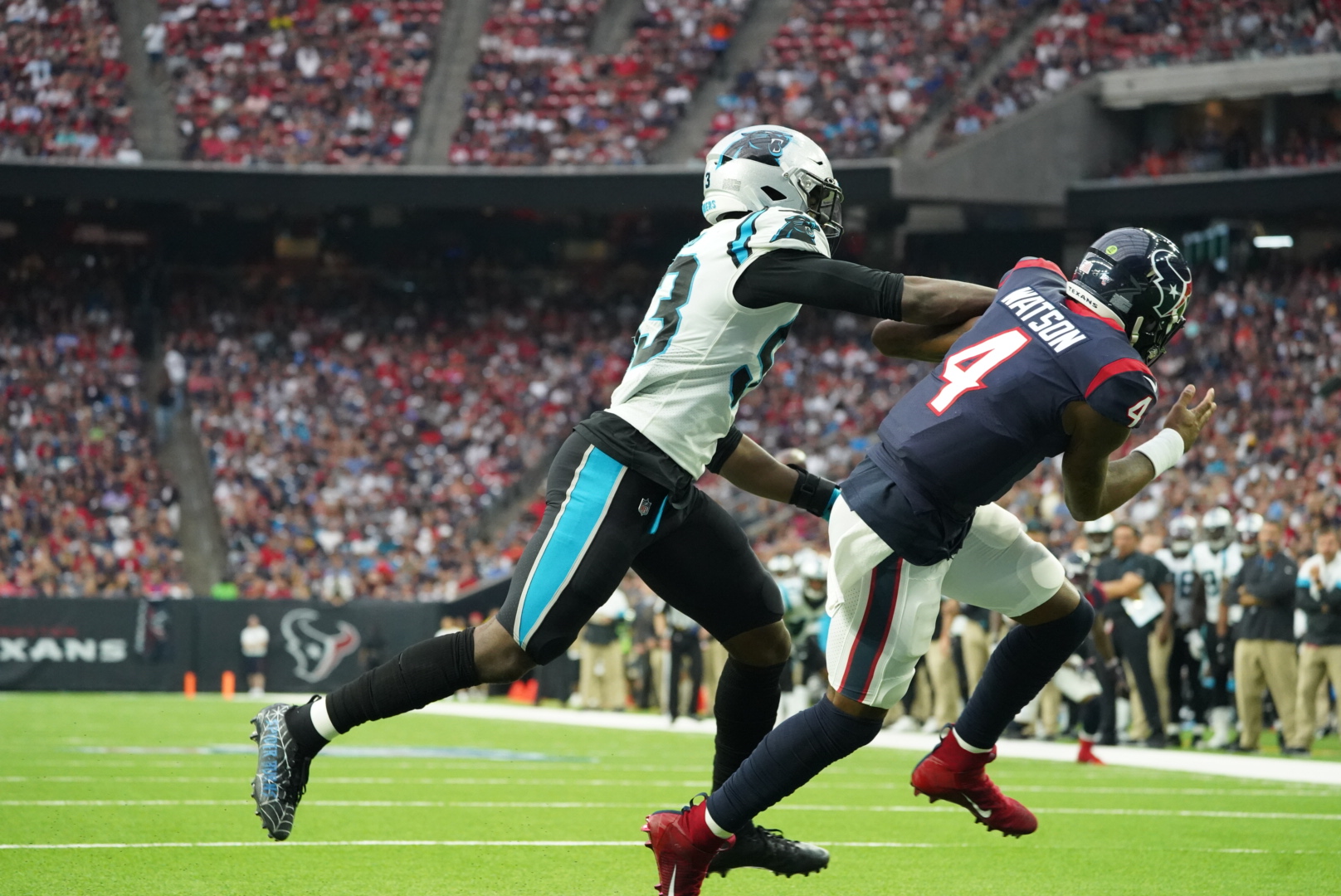 Two of the biggest plays of the game may have been plays that didn’t happen as Deshaun Watson misfired on two deep throws where he had receivers running wide open – Will Fuller had run by Ross Cockrell and appeared to be streaking deep but Watson put it four yards too far in front of the speedy wideout and DeAndre Hopkins also found himself past James Bradberry but Watson missed him.

Ultimately, the Panthers – and Bradberry in particular – smothered Hopkins. One of the best wide receivers in the game, Hopkins had 218 yards through his first three games and Bradberry held him to two catches for only 14 yards before the Texans’ final drive with the Panthers playing prevent defense. With a defensive starter missing, to be able to hold a potent passing attack like the Texans to 264 yards, have six sacks and force two turnovers is a special effort.

Panthers Get One Back 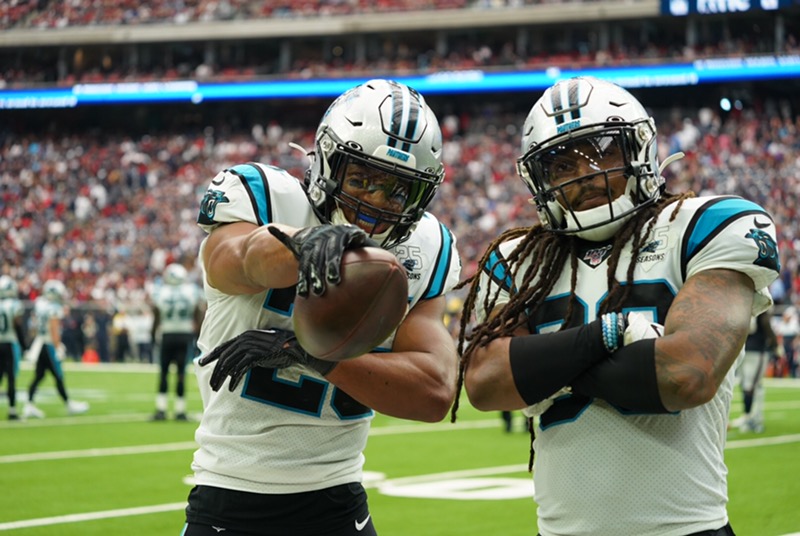 The Panthers defense finished off their dominant performance with a perfect microcosm of their day – safety Eric Reid, playing through pain after suffering an injury to his lower left leg in the first half, knifed through the left side of the line on a safety blitz and forced Watson to try and buy time when much-maligned defensive tackle Vernon Butler, subbing for an injured Kawann Short, was able to poke the ball free and Reid pounced on it to essentially seal a Panthers victory as Carolina was able to run the clock down under a minute before giving the Texans the ball back.