Six Plays That Mattered As The Seahawks Beat The Panthers 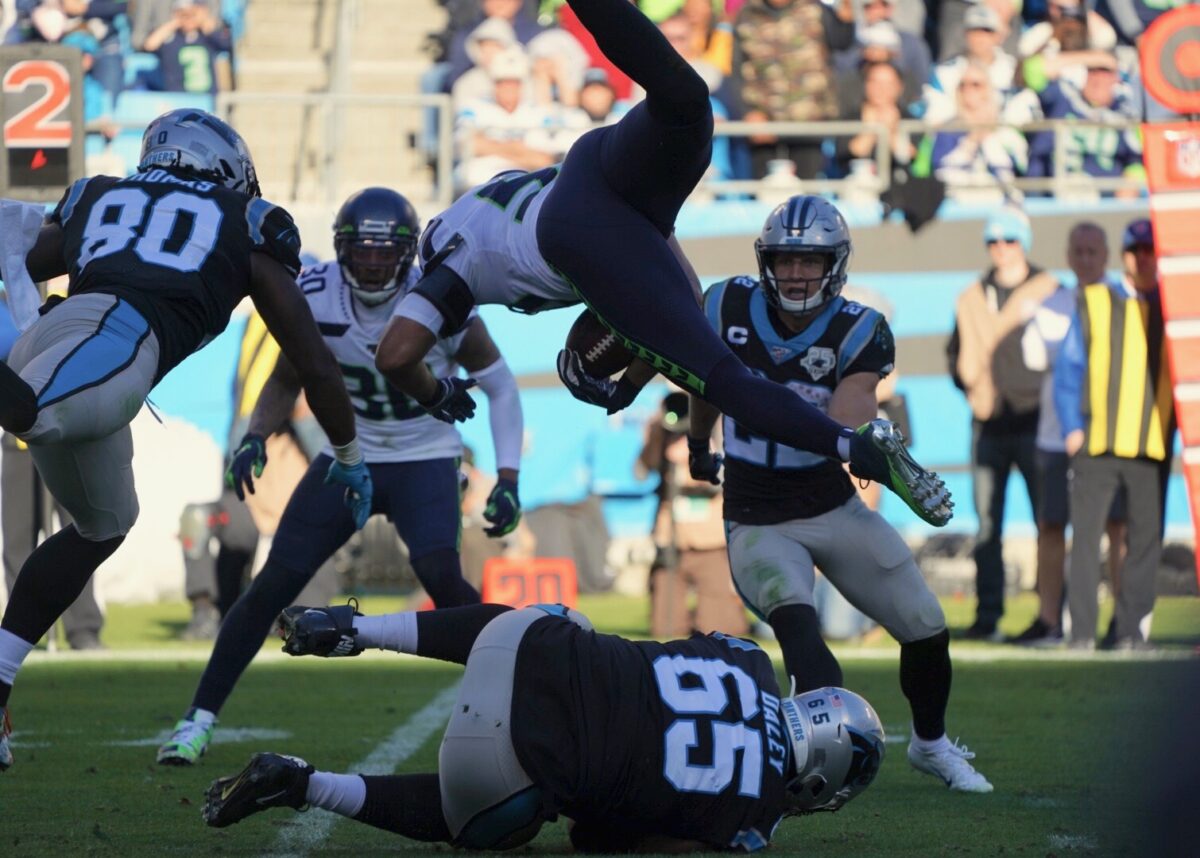 The Panthers lost their sixth straight game Sunday and seventh of their past eight after starting the season 4-2 to drop their record to 5-9 as they fell to the Seattle Seahawks 30-24 at Bank of America Stadium after a furious comeback attempt fell short in the fourth quarter and the Panthers were doomed by losing the turnover battle once again.

After being +6 in the turnover battles during their 5-3 start, they’ve been -13 since. Here’s how it happened: 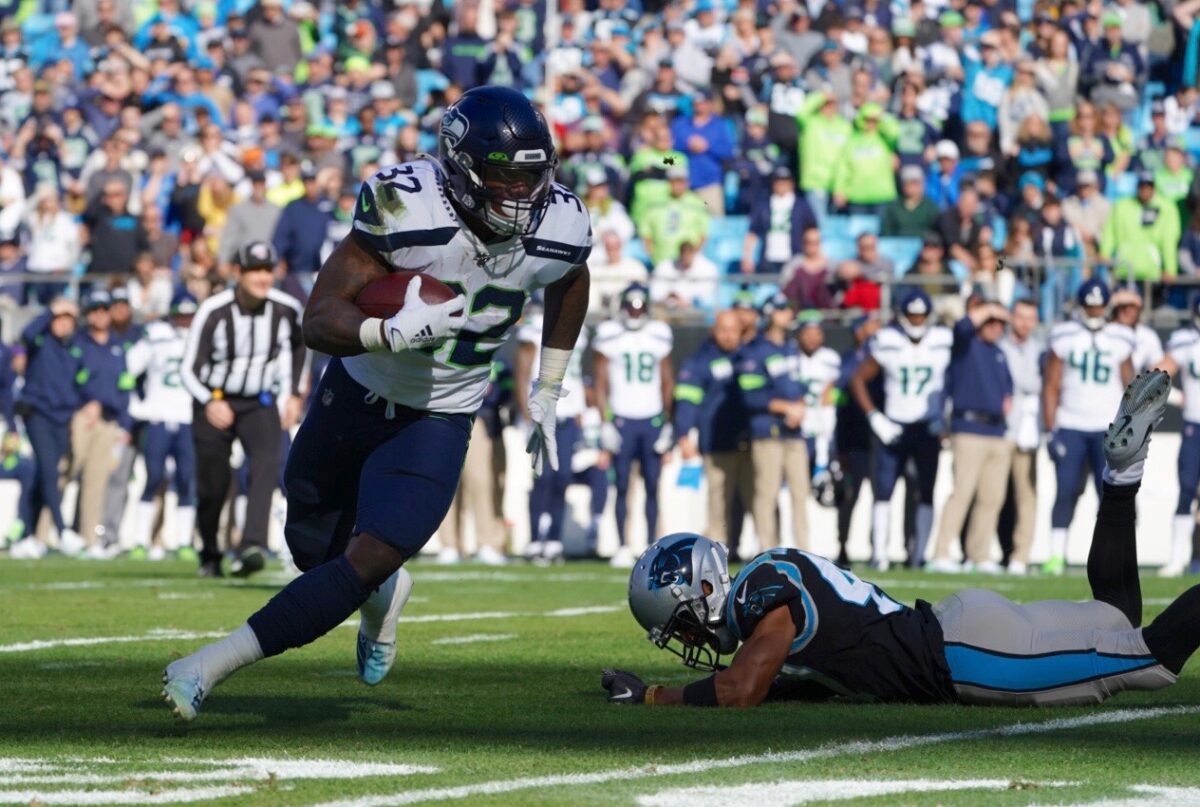 The Panthers won the toss for only the third time this season and elected to defer.

That was a bad decision as the Seahawks got the ball first and their offense was able to do whatever they wanted to on their initial drive.

Seattle rushed for 48 yards, including runs of 23 and 16 for Chris Carson, who found the end zone with less than five minutes into the game. After a failed PAT by Jason Myers, the Seahawks were able to take an early 6-0 lead and only faced second down three times on the drive.

Carolina’s rushing defense has been a consistent problem through the season as they entered Sunday’s game ranked 29th in that area as they’re giving up an average of 139.2 yards on the ground per game. The Seahawks came into the game as the third-best rushing team in the NFL (140.8 yards per game), so it wasn’t a surprise that they decide to attack the Panthers’ weakness early on.

The Panthers became the first team in the past 50 years to allow their opponents to rush for over five yards per carry and score more than 25 touchdowns on the ground through their first 14 games. 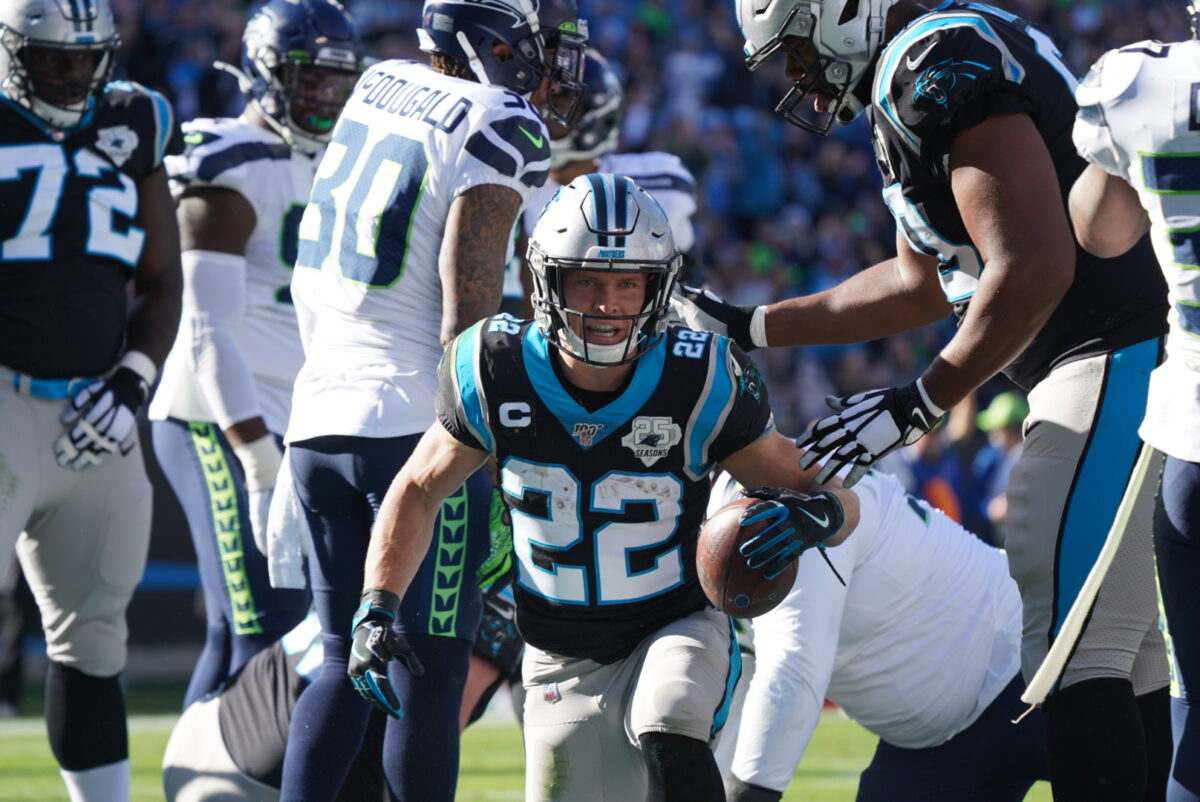 Down 13-0 with no momentum after the Seahawks easily went downfield for their second score of the game, the Panthers knew they had to try something different in order to stay in this game. So offensive coordinator Scott Turner dialed up some magic on the team’s second drive of the game.

Instead of putting the ball in the hands of his young quarterback Kyle Allen, Turner got the ball to his playmakers as Christian McCaffrey, D.J. Moore, and Curtis Samuel touched the ball on every single play of the drive. The results were the Panthers’ first touchdown of the game as a McCaffrey one-yard touchdown made it 13-7 with 13:43 left in the second quarter – McCaffrey’s score had extra meaning as he broke Steve Smith’s franchise record for most yards from scrimmage in a season.

McCaffrey, who finished with 175 total yards and two scores, became the first player in franchise history to accumulate 2,000 yards from scrimmage in a single season.

Turner got the ball early to McCaffrey as he pulled off runs of 12 and 13 yards to give the Panthers a first down, something they didn’t have on their first drive. Throw in a well-timed screen to Samuel, a direct snap to the wide receiver and a jet sweep for DJ Moore and we may have gotten a look at how the Turner offense might work – it’s always a good idea to involve the Cat Pack.

There’s An Offsides To Every Story 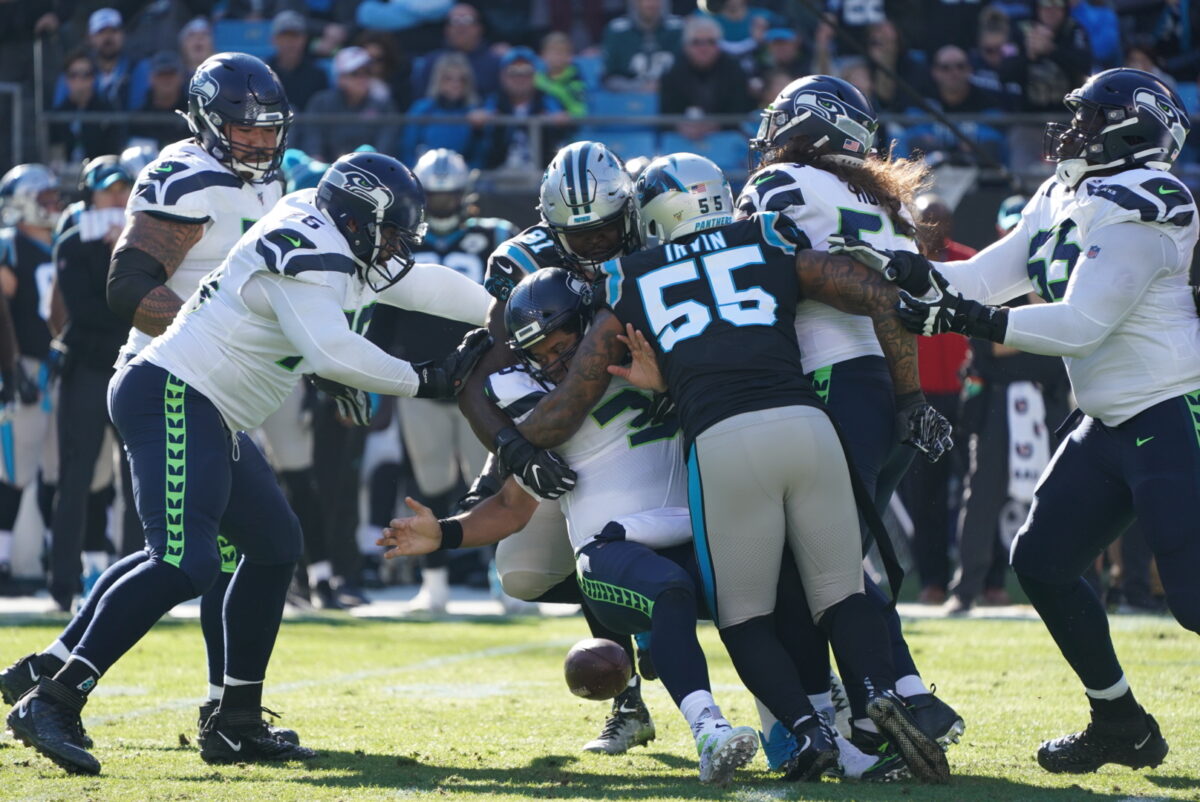 On third down early in the second quarter, it appeared the Panthers defense finally got a break – but a penalty changed everything.

Carolina finally appeared to get Seattle off the field on their third drive of the game as Stacy McGee and Bruce Irvin combined to not only sack Wilson, but they were able to knock the ball free. But Gerald McCoy was lined up in the neutral zone, nullifying the turnover, and that gave the Seahawks the ball back – and a first down to go along with it.

Two plays later, Wilson found Tyler Lockett wide open for a 19-yard touchdown reception. The extra point made it 20-7 with a little more than 10 minutes left in the second quarter. Instead of getting the ball back down a score, the Panthers would go down by double digits. 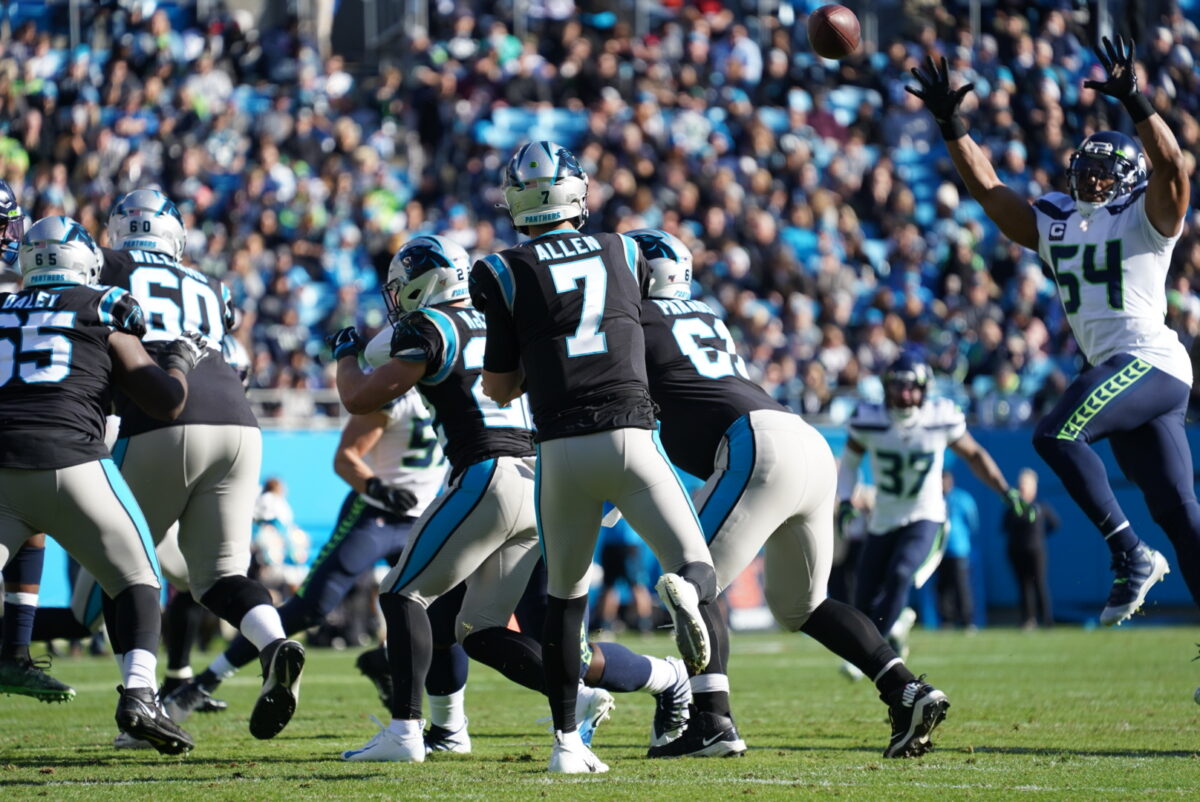 A lot of things didn’t go well for the Panthers in the first half.

But the team appeared to catch a break right before halftime. On a 3rd-and-17 play, Seahawks running back C.J. Prosise fell down and lost control of the ball as he fell; the Panthers appeared to recover the ball as safety Tre Boston secured only the second turnover of the past six games for the Panthers. However, upon official review, Prosise was touched as he was falling to the ground, which gave the ball back to Seattle as they were able to punt.

Despite not getting the fumble, Carolina still had an opportunity to get points as they were driving into field goal range after starting with good field position – but on 3rd-and-10 at the Seahawks 32, Allen threw a pass that was intercepted by linebacker Bobby Wagner – that was his 13th of the season and eighth in the past five weeks. Carolina could have had points before the half and they certainly needed it, down 13. But the team was unable to capitalize, which was a common theme during the first half and the Seahawks led 20-7 at halftime.

After Tre Boston picked off his third interception of the season, Allen gave the ball right back to the Seahawks as the teams traded field goals in the third quarter – the Seahawks led 23-10 after a third quarter where the Panthers possessed the ball for 9:22 of the 15 minute period but could only muster a single 52-yard field goal as Allen threw two interceptions in the third stanza.

The fourth quarter almost began with disaster as a ball thrown behind McCaffrey – Allen was anything but accurate throughout the game and at one point had a lower passer rating than Christian McCaffrey, who had thrown incomplete on his only pass attempt of the day – bounced off the sure-handed running back’s hands and into the waiting arms of safety Ugo Amadi, who scampered 40 yards for the touchdown after fumbling the ball back to himself.

But officials ruled that the pass was incomplete, so what appeared to be Allen’s fourth interception was simply his 12th incompletion and the Panthers would punt it back to the Seahawks.

Allen finished with 277 yards on 25 completions, the lone score and three interceptions for a passer rating of 58.7. 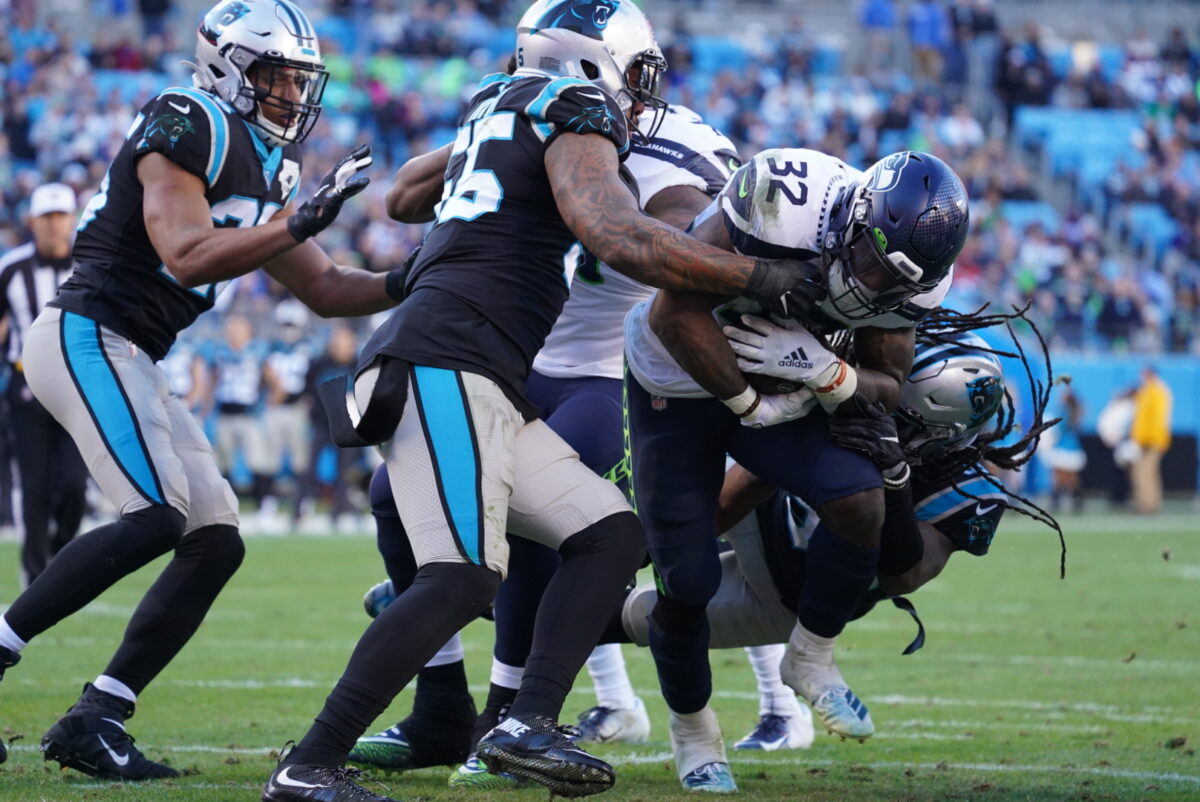 Chris Carson became the latest opponent to rush for over 100 yards against the Panthers as he finished with 133 yards, including a six-yard touchdown in the fourth quarter that put the Seahawks up 30-10.

After McCaffrey matched that touchdown to cut the lead to 30-17 with his second rushing touchdown of the game, the Panthers drove down the field using a heavy dose of DJ Moore, who had 113 yards receiving on the day, and cut the lead within a single score with 3:14 left. But with only one timeout left and the Panthers needing to make a stop on the final drive, the Panthers were unable to keep the Seahawks from moving the chains despite three holding penalties in one series and the Seahawks were able to kneel out the clock.