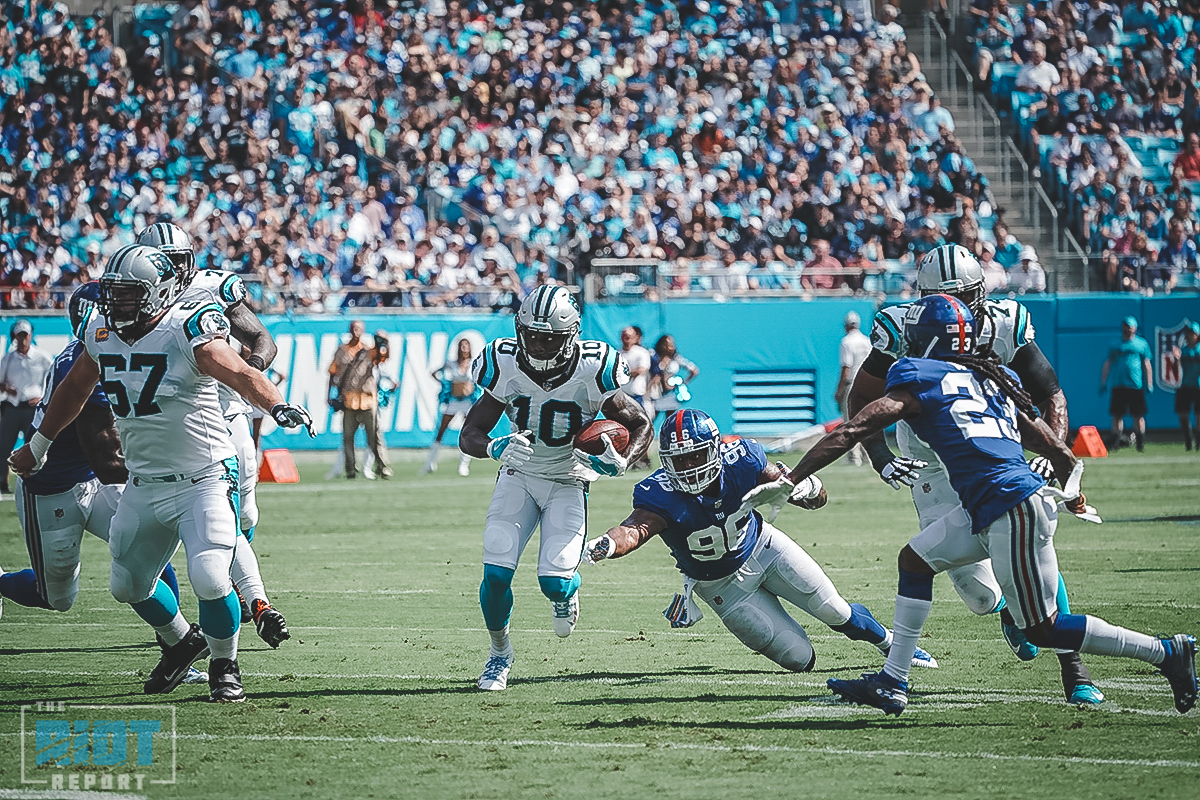 Two weeks ago against the Bengals, running back CJ Anderson turned one of his three snaps into a 24-yard receiving touchdown and on Sunday against the New York Giants, second year wide receiver Curtis Samuel had a similarly eye-popping ratio, turning his 12 snaps (only 17% of the offensive plays) into two catches for 37 yards and an electrifying 25-yard touchdown in which he broke five tackles en route to the end zone. But while Anderson’s snap counts (eight on Sunday) remain at about the same level with Christian McCaffrey (97% after 100% in Week 3) as the bellcow, we may be seeing more from Samuel going forward – don’t forget, Sunday against the Giants was Samuel’s first regular season action in 328 days and Samuel hadn’t been able to practice since before Week 1.

“As far as Curtis was concerned, he got winded a couple of times,” said Ron Rivera on Monday. “You could see it – he hadn’t been able to do anything for three weeks or four weeks or however long it was.”

We may be seeing more from rookie DJ Moore as well, who played 49% of the snaps in Week 3 but only had one catch for three yards – Moore had five touches for 67 yards on 41% of the snaps but was outsnapped – albeit by one – by Jarius Wright, although that may have had to do with situational football; Moore is already showing off the run after catch abilities that led the Panthers to draft him with the 24th overall pick.

“If there’s one thing we thought he could do, and I forgot what it was, but there’s a number where when he had the ball in his hands – yards after catch – those were pretty impressive,” Rivera said about the rookie. “And some of those yards after catch where he was breaking tackles, he’s a good size receiver.”

“It’s the same thing with Curtis – Curtis was a running back, he’s used to running for yards after he’s had the ball in his hands, so they’re going to break tackles and they’re going to run strong. In some respects, they remind me of when Devin Hester used to return punts and kicks – he was tough to bring down because he was a one-time running back.”

While the Panthers headed into the game with a plan to keep new safety Eric Reid on a ‘pitch count’, Rivera said that they ‘couldn’t help themselves’ and played the 26-year old former Pro Bowler more than they wanted to – the coach said he was particularly impressed with the safety’s tackles near the line of scrimmage

“There was a cover 2 that we ran and Donte, as young guys tend to do, he bit up on the underneath play and they threw an underneath play – Eric got off his half and got there for the hit, which was pretty impressive when you look at it. He broke downhill and was still able to make a good clean hit, so you can see that he has that kind of skillsets that you’re looking for.”

On the defensive line, the Panthers utilized even more of a rotation than usual, with Kyle Love only getting one less snap (25) than Dontari Poe (26) and Wes Horton only outsnapping Efe Obada 19 to 18 in Obada’s second NFL game – Julius Peppers played his highest playtime percentage (66%) and Eric Washington said that Peppers had his most impactful game, but the best is yet to come for the 17-year vet. Expect to continue to see the defensive line numbers fluctuate on a game-by-game basis as Washington not only finds his rhythm, but tries to ride the hot hand on occasion.

“It’s a little bit of a feel – it’s not paint by the numbers,” said Washington about the defensive line rotation. “We want to make sure that guys have enough juice, especially in obvious passing situations, to go get the quarterback [and] chase the football if it goes outside the perimeter.”

“It’s not an exact science, there is a big-time feel component.”