Stephen Weatherly Lets You Choose Your Own Story 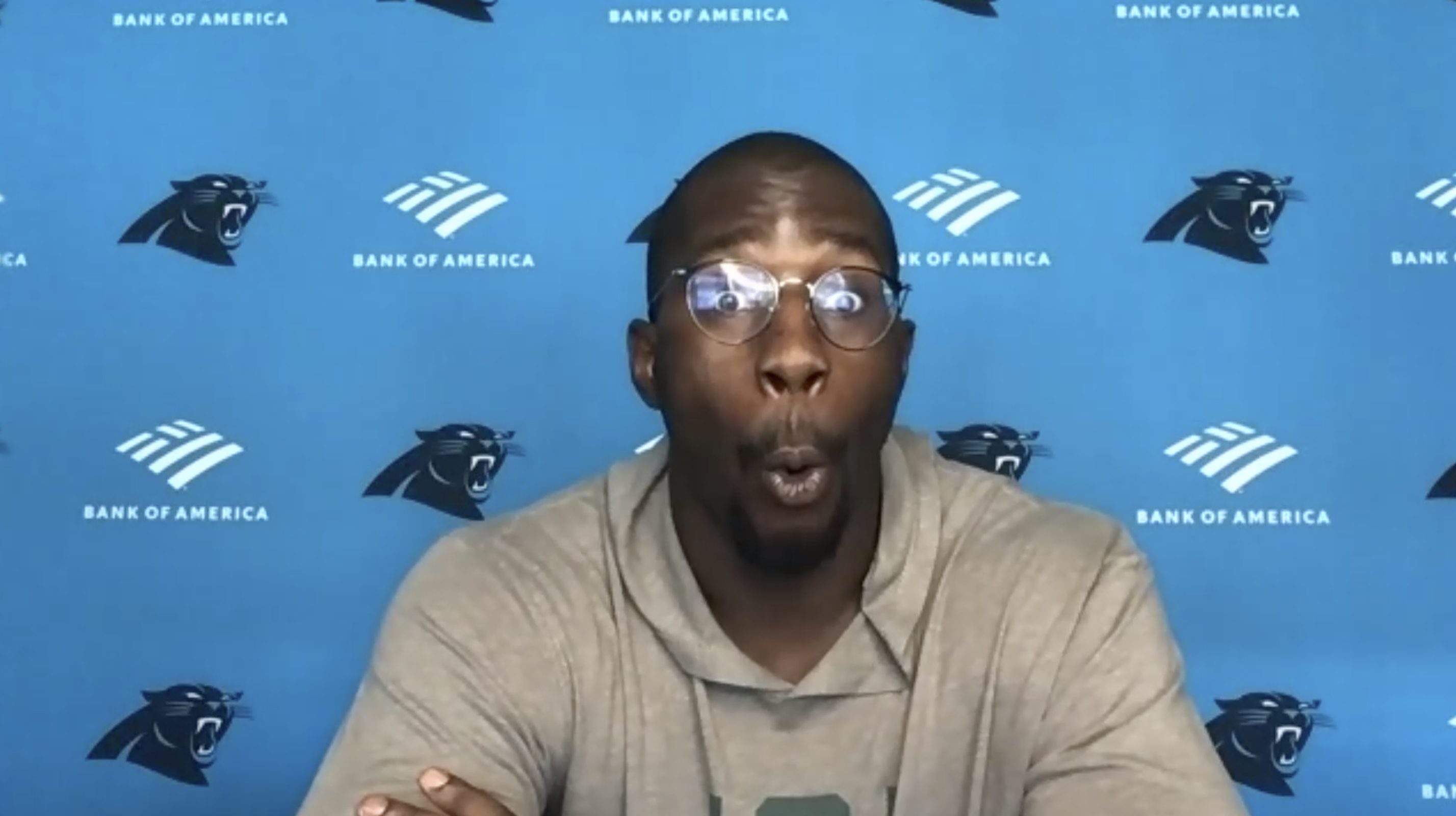 When you’re writing a story, especially during training camp when there are more than 90 tales to tell on the roster, each player interesting in his own unique way, a good reporter is always looking for a good lede.

A quick anecdote to pull the reader in – maybe it was the player’s birthday recently, or they’ve been swimming for exercise during this offseason or they’ve gone vegan. Make sure you make an allusion to it in the title to peak the reader’s interest, but be vague enough that it could be both about your non-football lede and the player’s role in the defense.

Extra points if your first paragraph is only one sentence.

Anything to make the player more relatable before the standard training camp platitudes about how expanded reps can really open up a player’s game or the new coaching technique is going to take this guy to the next level or the old-standard “this guy is the clear MVP of camp” takes over the middle 500-ish words of the story before you theoretically can bring back the subject of the lede for what’s called in the biz a kicker.

For your birthday story, maybe something like “don’t blow out the candles on Eli Apple’s career just yet.” Try to use the word ‘swimmingly’ as the final jab in the swimming story. Maybe end the vegan’s tale with “he’ll be the one eating the salad” or something like that – that’s how you write a quality story that might get passed around the internet or at the very least picked up by Bleacher Report.

In just over 17 minutes of media availability Tuesday afternoon, Stephen Weatherly provided just short of a million story ideas. The 26-year old who is expected to start opposite Brian Burns in September was referred to earlier this offseason as ‘the most interesting man in the NFL’ – and he certainly lived up to that moniker. The Panthers are hoping that he can live up to the expectations they’ve set for him after he played well in a rotational role behind Everson Griffen and Danielle Hunter in Minnesota and his game is expected to really open up with expanded reps in Carolina.

The coaching technique of defensive line coach Mike Phair will really take Weatherly’s game to the next level and while the media isn’t allowed to observe camp just yet, the rumors are going around that the 6-5 defensive end from Vanderbilt looks like he might be a clear MVP. But there are lots of stories to tell about Weatherly, and instead of trying to choose just one angle, why don’t we just give you the best part of the story – the lede.

No Blurred Vision For Stephen Weatherly 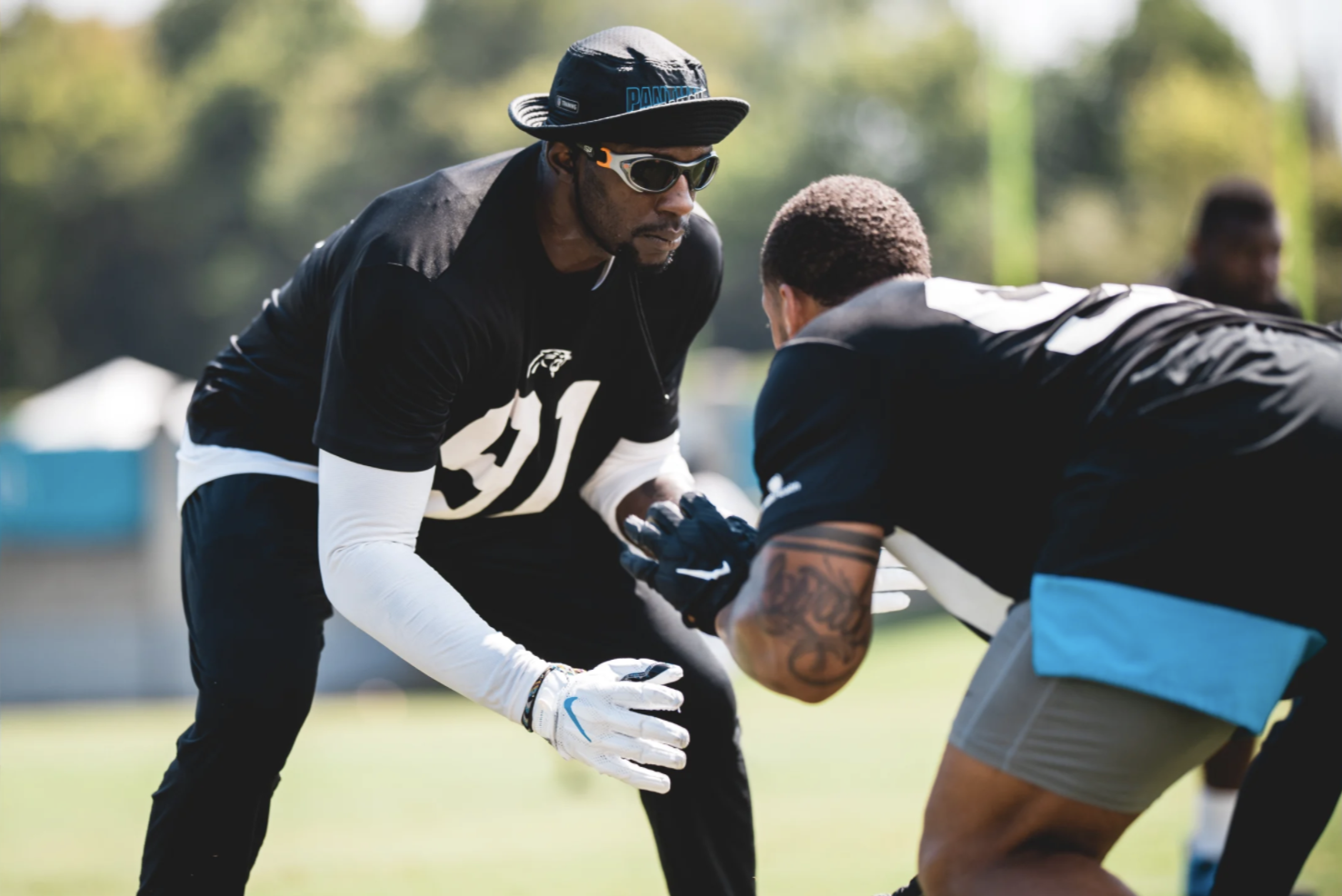 OK, now picture that – except it’s in the middle of an NFL game and a 350-pound tackle wants to crush you while you can only see out of one eye.

That’s the situation Stephen Weatherly was in – and the one he wants to avoid in the future.

“I’ve lost a contact in-game and it’s very uncomfortable, so I made the decision that I was going to wear goggles,” said the 6-5 defensive end from Vanderbilt. “I have pretty bad eyes, so I have those and they’re to keep the sun out of eyes for my astigmatism, but then also — COVID protection.”

“Sky’s The Limit” For Panthers Defense According To Stephen Weatherly

In a recent article, The Athletic ranked the Panthers defense as the worst in the league heading into the 2020 season. From what Stephen Weatherly’s seen on the field thus far in training camp, he’s not buying it.

“The sky’s the limit,” said the 6-5 defensive end from Vanderbilt. “The level of proficiency that we’re showing with a brand-new defense for everyone, I’m really liking it….I think it’s going to be a really good defense and I think we’re going to be able to execute early on.”

Pundits aside, Weatherly is loving what he’s seeing from his teammates on the defensive line – including putting fellow edge rusher Brian Burns in elite company with a former teammate of Weatherly’s in Minnesota. Weatherly says that Burns “freakish” body controls reminds him of Danielle Hunter, who has has 29 sacks in the past two seasons.

“He’s big,” said Weatherly, before reconsidering. “Like, I’m big, but he’s BIG – he does not move like he’s big, which is always a great thing.”

Possible Kicker: The sky may be the limit, but the Panthers are hoping Weatherly puts some people in the ground.

Looking for lessons coming out of the quarantine, Stephen Weatherly learned a big one over the past five months: He does not have a green thumb.

“I’ve already killed the grass twice,” laughed the 6-5 defensive end from Vanderbilt. “So that’s what I’ve been doing a lot of – just learning about grass.”

Possible Kicker: Ultimately, the only grass that will matter are the blades between the sidelines.

Stephen Weatherly Has “Something To Prove” In Carolina

After three seasons of being stuck behind two Pro Bowlers, Panthers defensive end Stephen Weatherly is ecstatic to get his shot at a bigger role in Carolina – and he knows this is his chance to make a name for himself.

“I’m super excited to come out here and legitimately fight for a spot – a bigger, more expanded role,” said the 6-5 defensive end from Vanderbilt. “I do feel like I have something to prove every time I step on the field, at least on my individual battles, showing that for this one rep, I’m going to dominate.”

“I feel like I’m ready to go out there and show what I’ve got – for sure.”

Possible Kicker: Now he’ll just have to get out there and prove it.

Panthers defensive end Stephen Weatherly thought long and hard about opting out before the season even began – the idea of not seeing his family for months while he traveled around the country to play football seemed too much to bear.

After careful consideration with his family, Weatherly was closing in on a decision – but it was hearing how the Panthers were going to make their facility safe that truly convinced him….and when he saw how serious his teammates were taking it, he was even more sure.

“Once I figured out how we were going to do with it, I was perfectly fine with it,” said the 6-5 defensive end from Vanderbilt. “I had already made the decision before I had read the plan or even got to experience it.”

It’s not just inside the facility that’s going to require diligence – it’ll be at home, too.

“During the next six months, it’s going to be a really small circle. No one here’s been talking about it because everyone’s been living it.”

Possible Kicker: The Panthers are one of only a few teams to have zero positive tests for COVID-19 thus far – certainly winning off the field. They’re hoping they can carry over that success onto it.

Stephen Weatherly can play nine different instruments – and like many musicians during the self-quarantine of the past few months, the Panthers defensive end has been working on some new tunes.

And he knows just the right topic.

“If you look at social media three months into lockdown, everyone’s been posting these ‘been thinking about my life’ and ‘everything’s different’ and ‘after deep soul searching, I’m now this new individual,” smiled the 6-5 defensive end from Vanderbilt. “Everyone’s going through a metamorphosis all around.”

Weatherly is also hoping for a metamorphosis on the field.

While fans at home may be gnashing their teeth at the slow journey to padded football that the COVID pandemic has inflicted upon every NFL training camp this summer, Panthers defensive end Stephen Weatherly is actually enjoying it.

With a lack of OTAs and mini-camp and the players only allowed to do walk-throughs for the first few weeks of camp, Weatherly says he and his teammates are able to focus on the details instead of the wham-bam-here’s-the-playbook mentality that can come with being in pads on the second day of camp. So the slowdown is actually a net positive.

Well, except for one thing.

While Weatherly is enjoying the slow acclimation to football, he’s sad the missing out on the vintage rookie mistakes that he was looking forward to seeing from the first-year players – when he was a rookie, the entire playbook was available to be called, a confusing assignment for a rookie trying to get used to the speed of the NFL.

“If I was a rookie, I would be so grateful for whatever football God allowed this,” said the 6-5 defensive end from Vanderbilt. “To have your head spinning like that while also beating your key is a classic thing you see rookies do….”

Possible Kicker: But don’t worry – the opportunity for a mistake is still there, even in a non-padded walkthrough. “Every once in a while, they have the classic rookie mess up and we get a chuckle in.”

It took Panthers defensive end Stephen Weatherly way too long to understand how important voting was, not just to him, but to the larger community. How there is no hope for long-lasting change without legislation to support it – and there is no chance for that legislation without the public voicing their opinion.

And with Carolina’s Your Vote Counts initiative launching last week, he’s hoping Panthers fans get that message sooner rather than later.

“For the Panthers to also feel the same way and to help us get out there get everyone in the Carolinas to understand the importance of voting really speaks a lot to the organization,” said the 6-5 defensive end from Vanderbilt. “We’re going to do what it takes to make sure everyone’s properly informed on it.”

Possible Kicker: Now that’s how you rock the vote.

Months of self-quarantine, an offseason made virtual by the COVID pandemic and the prospect of not being able to spend time with his family brought Weatherly to a realization this summer.

“When life turns back around, I need more friends – I’ve been very isolated. I’m used to being in my own bubble, but it’s OK to celebrate successes along the journey with people,” joked the 6-5 defensive end from Vanderbilt. “If it’s not family or people who I would consider family, I don’t make time for it. But I need to learn how to make more time for other people and be more inviting of my own personal time.”

Possible Kicker: As long as one of those friends isn’t the opposing quarterback.