The Year of 54 May Have Officially Kicked Off On Sunday 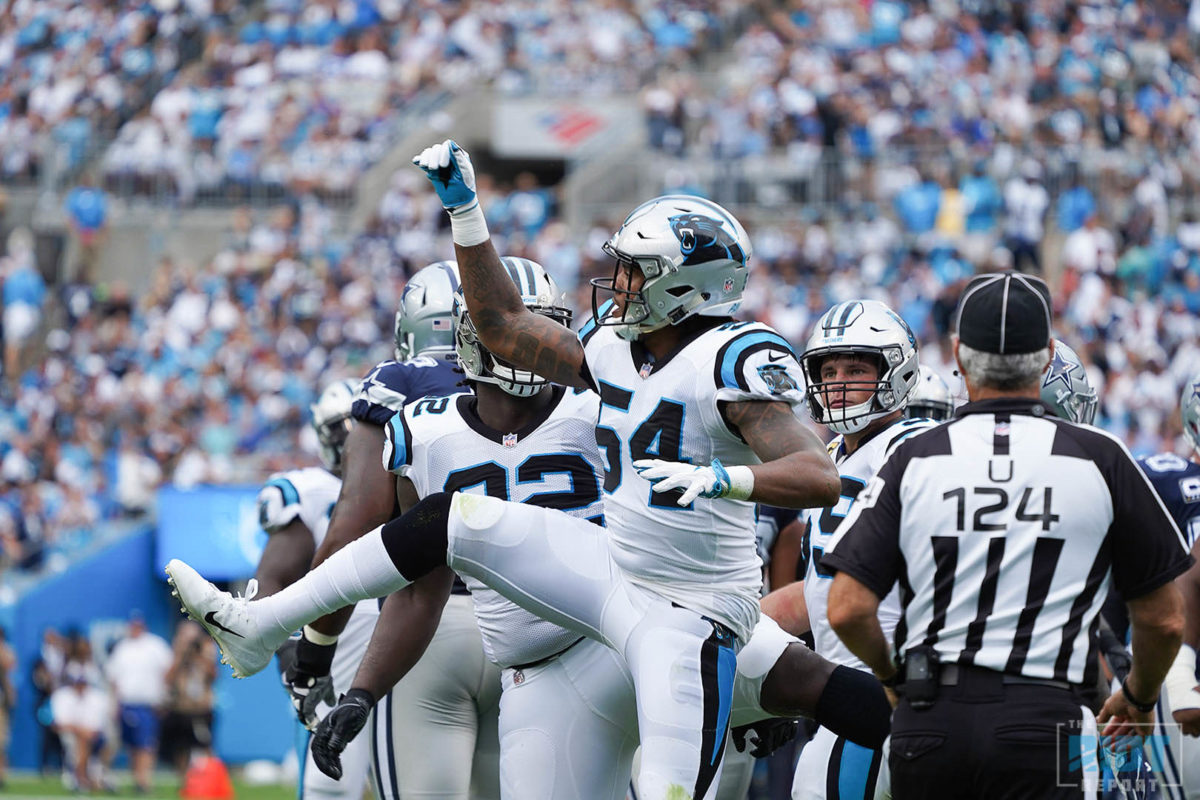 Shaq Thompson came into training camp proclaiming 2018 to be “The Year of 54”.

While he’s played at a high level thus far this season, it was Sunday’s game against the Ravens that might have been the welcome party.

Thompson has piled up 35 combined tackles through the first six games of the season, but it was the fourth-year linebacker’s explosion for 13 tackles against the Baltimore Ravens on Sunday on only 57% of the snaps as he helped limit the Ravens to only 192 yards in the first three quarters while the Panthers built a three score lead that jumped off the stat sheet.

But when you play next to Luke Kuechly and Thomas Davis, having the second-most tackles and sacks on a Panthers defense that currently allows the second-fewest rushing yards per game doesn’t get you a lot of accolades – even if your 48 tackles through seven games is the highest of your career to this point, a number that’s improved every one of Thompson’s seasons since he was drafted 25th overall in the 2015 Draft.

“It doesn’t take a brain surgeon to see the strength of that linebacking unit,” said Tampa Bay coach Dirk Koetter.

While Kuechly and Davis tend to dominate the pre-game shows, it’s Thompson’s steadiness that has helped the Panthers eighth-ranked overall defense – Thompson stepped in while the franchise all-time leading tackler was suspended for the first four games of the season and played every single defensive snap the first quarter of the season.

Defensive coordinator Eric Washington praised the speed of Thompson not only physically, but mentally – Thompson has made strides this year in terms of getting himself in the right spot pre-snap based on the personnel and look of the offense; specifically, plays like at Washington where he put himself in the right spot pre-play and then used his athleticism to bring down Alex Smith for the sack.

Whether it’s been Davis or Thompson – or even rookie Jermaine Carter, Jr – linebacking coach Steve Russ has put all of the linebackers on the roster in a position to live up to what Carter calls “the standard” that linebackers in Carolina, from Dan Morgan to Jon Beason, have to live up to.

“We talk about the standard a lot and I don’t want to let the standard down so I’ve got to perform to the level that they’re performing at,” said Carter, who picked up his first big hit this past week against the Ravens – Carter has been playing extended special teams snaps and occasional reps at linebacker. “That’s what’s expected of me.”
Washington feels the same way.

“Steve Russ has done a nice job with the linebacking corps – they’re interchangeable,” said the first-year coordinator. “I came into this season believing that they’re the best in the business, that group – Luke Kuechly, Thomas Davis, Shaq Thompson – there’s nothing that has changed my opinion of that. Shaq has done a nice job…just being ahead of the play and anticipating some of the things that we might get.”

While Thompson’s versatility is what drew the Panthers to him in the first place when they drafted him in 2015 – Rivera said this past week that they felt comfortable playing him at safety in an emergency situation against Baltimore – his play as a linebacker thus far this season has been reason enough for him to get snaps; his history at safety at the University of Washington has made him able to play linebacker with a natural feel for pass coverage – the interaction between linebacker and safety can be key to pass defense.

Related:   One Day Contract: Draft Preview With Will Bryan

When a tight end, wide receiver or running back runs a route between 12 and 16 yards and the Panthers are in a zone defense, if the linebackers don’t get deep enough on their zone or step up due to play-action, it puts a lot of pressure on the safeties to come up and take care of the pass catchers in front of them as opposed to being able to play top-down.

“Now the guy’s breaking early on the ball and all of a sudden they double move you or somebody’s coming from the backside and you get in trouble,” said Rivera about the importance of linebackers in a quality pass defense.

So while you may see accolades for Kuechly and Davis as they lead the Panthers defense against the #1 passing offense in the league this weekend, don’t forget who might be making the biggest difference on passing down.

Don’t forget what year it is.