Third-and-Scary: How the Panthers Defense Can Dominate the League 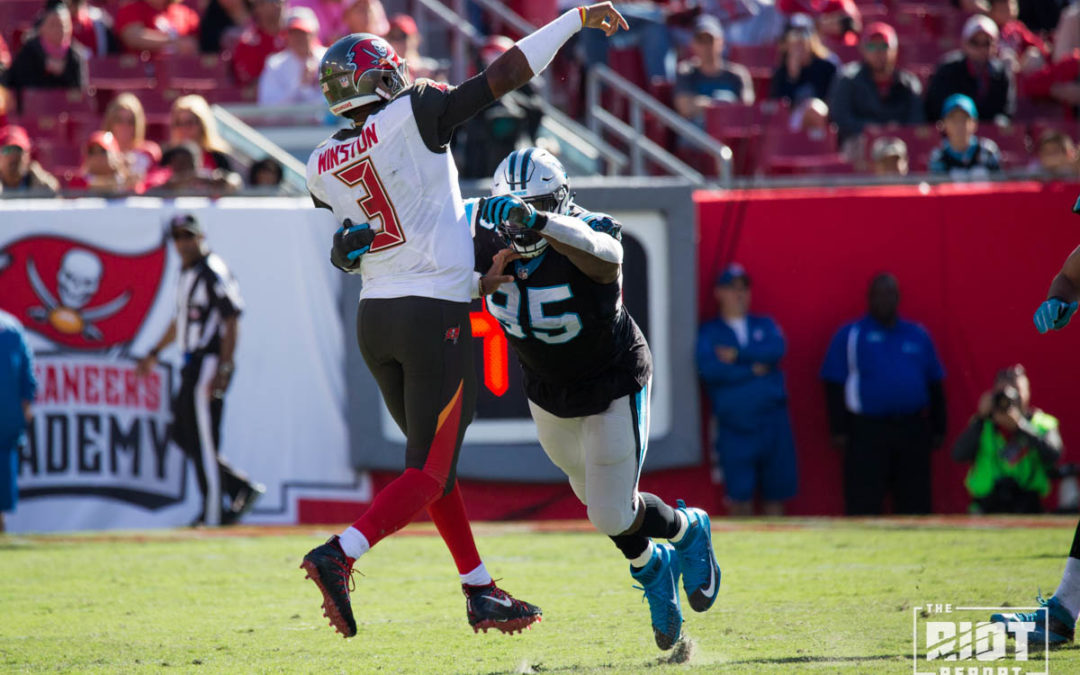 Against certain defenses in NFL history, when teams faced a third-and-long situation, they may have been better off running a draw play and punting instead of taking the chance of dropping back and facing the terrifying array of blitzers anxious to not just stop the ball, but perhaps secure it for their offense. While the Panthers’ 2017 defense hasn’t quite reached ’85 Bears or even ’14 Seahawks level yet, Sunday’s game against the Buccaneers was a wonderful example of how effective zone-blitz defenses can be in such third-and-long situations. The Buccaneers went 1-for-12 when passing on third down and fourth down; this alone is hugely impressive but the ability to generate negative plays was even more so. The Panthers defense forced as many interceptions as they allowed completions and added a strip-sack into the mix; how did they manage this?

You Make Your Own Luck

However good a defense is, some of their success will always have a touch of luck to it and Sunday was no exception. On a pair of third downs, Winston simply missed the open receiver and let the Panthers off the hook.

While on the surface, the blame seems to lie solely with Winston, the Panthers were able to force mistakes even when Winston wasn’t directly under pressure.

While this play might just look like another miss by Winston, under closer inspection, it it is clear that the interior pressure from Lotulelei prevents Winston from being able to step into the throw.

In order to generate plays like this, the Panthers rely on generating pressure on a consistent basis; something that Steve Wilks has been able to achieve in various ways.

While on the second play Luke Kuechly does rush once it is clear the running back is staying in to pass protect, in both cases, the pressure comes from the four man front. In the first instance, this is due to a frankly delightful spin move by Kyle Love:

Whereas on the second play, the pressure coming from Peppers and Love forces Winston up in the pocket to where Charles Johnson is able to get pressure as he swings around from the edge. This ability to get pressure without blitzing makes it very hard for the quarterback who is forced to hold onto the ball against the drop-back coverage. On the whole, though, the Panthers used blitzes to generate pressure on third downs.

The downside of blitzing is that if a team is able to recognize the blitz before the snap, they are potentially going to be able to find easy completions as receivers are left uncovered. What makes the Panthers so special is the ability to counter this by taking advantage of one of the highest IQ defenders in NFL history. On the following play, Winston recognizes the nickel blitz and checks to a receiver screen to counter it. However, the Panthers and more specifically Luke Kuechly, appear to counter-check, with Kurt Coleman dropping back to the high position and Mike Adams dropping down to stop the screen before the yard marker.

What should also be noted about how the Panthers bring pressure is that they look to overload one side of the line while dropping players off of the other. The advantage to this tactic is it allows a team to generate pressure without having to bring that many blitzers, as much of the pressure comes from miscommunication and spatial limitations on the offensive line. The Panthers only bring five rushers against the six blockers, but Munnerlyn is left unblocked in the play above. The same is true on the following incompletion:

Related:   Sam Darnold Shines and Other Observations from Panthers' Preseason Game vs. Steelers

While the Buccaneers certainly made significant errors on this play, by forcing the left side of the line to block four rushers the Panthers are able to generate these mistakes on a relatively consistent basis. It should also come as no surprise that when quarterbacks are put under consistent pressure they often make more mistakes, and on Sunday that led to two big interceptions for the Panthers.

The first is an obvious result of the pressure, with the ball being hit during the throw leading to a fluttered pass and a pick.

Constant pressure also speeds up the clock in the quarterback’s head. On the second pick, the Panthers are helped by a poor play design from the Buccaneers with limited options for Winston, but the panic is somewhat evident.

Even if Winston hadn’t thrown the ball here, the pressure and coverage are such that the likelihood of any positive outcome for the Buccaneers is very low. Eventually, as quarterbacks continue to be unable to make plays they will start to try and force passes down the field, leading to picks like the one above. What all of this requires is the pairing of pressure with good coverage; something that the Panthers did very well on Sunday.

Locked Up and Shut Down

The Panthers 2013 defense was rightly seen as one of the best in the NFL, but what has often been overlooked was how this defense was able to be so effective without particularly competent play from their corner. Melvin White, Drayton Florence and Josh Thomas were all out of the league within two years of contributing to the 2013 unit with Thomas and Florence never starting a game again after that season. What made this possible was the Panthers defensive scheme at the time minimalized the responsibility placed on the corners and the front seven were able to generate enough consistent pressure that they were never asked to cover for that long.

Related:   Five Keys To Success For Panthers Against The Jets

Where this version of the Panthers defense looks to be different is in the ability of the corners to cover down the field and so allow for greater scheme versatility. While Daryl Worley has had somewhat of a mixed second season so far, on Sunday he had one of his better performances, and on the one third down where he was challenged he made a nice break on the ball to force the incompletion.

On the other side of the field, James Bradberry has been stellar, shutting down Mike Evans for much of Sunday’s game. While the Panthers haven’t historically run a huge amount of man-to-man, they clearly feel comfortable letting Bradberry travel with the offense’s best receiver, and when he plays like he did on the following play it isn’t hard to see why:

As good as Josh Norman was and is, the Panthers rarely if ever showed the level of confidence in him that they currently are in Bradberry. It cannot be overstated how impressive he is for a player just halfway through his second season. With that said, the Panthers’ coverage prowess goes well beyond one player, and this ability to utilize drop-back coverages give Wilks immense flexibility with his play-calling, which in turn makes things even harder for opposing quarterbacks.

It is often said how pass rush can help a secondary and how good coverage can help a pass rush; the performance by the Panthers’ defense on Sunday was a living example of this. By being able to mix blitzes and coverages, Steve Wilks has been able to create one of the most potent defenses in the NFL, and although the offense has been slow to get going this season, defensive play like this will keep the Panthers in the playoff hunt while the offense finds it’s footing.