Three Up, Three Down: Cornerbacks & Safeties 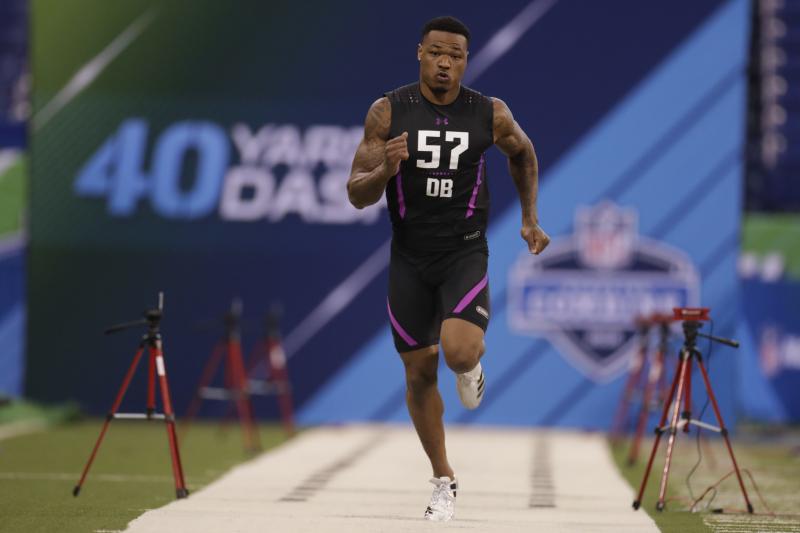 With the NFL’s Scouting Combine now in the books, cornerbacks and safeties have completed their medical testing, on-the-field drills and media availability; while there were meetings with teams happening throughout the weekend and a lot of combine evaluations should be taken with a grain of salt, some conclusions can be drawn even from the small corner of the puzzle that is starting to be put together to determine where these prospects will be drafted come April. So what can be gleaned from the defensive secondary’s performances in Indianapolis? Let’s take a look at a few players who may have moved the needle for themselves, some in the right direction with positive performances, and a couple who may have hurt their draft position as they came up short.

While many scouts said that Alexander was the best cornerback in the actual drills, he performed well in the measurable categories as well; the 5’11” Charlotte native ran a sub-4.4 40 and finished in the top five among cornerbacks in the three-cone, broad jump and short shuttle. Alexander may have shot himself into the first round (maybe even early in the first round) after entering the Combine an early Day 2 pick; Alexander was injured for much of 2017, which hurt his draft stock, but he certainly seems healthy now.

After showing intellect and a feel for the game on the podium in front of the media on Sunday, Reid took to the field to back up his talk that he would be “showing people some things” when he got on the turf, and he certainly did. The 6′, 207 pound safety ran 4.4 flat, jumped 36.5 inches in the vertical, had a 10’8″ in the broad jump and a tremendous three-cone score of 6.65 for a player of his size; Reid has been projected everywhere from late in the first round to somewhere on Day 2, but certainly seems like someone who could step in and make an immediate impact for a team.

In the last 10 years, only five cornerbacks have run a 4.32 or faster 40-yard dash, and three of them happened in 2018; perhaps the most impressive was the Buckeye cornerback who solidified his status as an early pick with the fastest 40 of the day, a 39″ vertical jump (second best) and the best broad jump among corners. Ward outperformed former Buckeye and 2017 Rookie of the Year Marshon Lattimore’s Combine, and in a classic example of the Combine informing the tape, Ward looked as fast as advertised. Oh, and he did all of this on a tweaked ankle.

Picked A Bad Day To Have A Bad Day

Did Josh Jackson have a terrible day? Absolutely not. In fact, he produced the fifth-best vertical jump and short shuttle scores, but a 4.56 40 (after an initial unofficial 4.49), disappointing 6.86 three-cone and 4.03 short shuttle times left some puzzled as to whether Jackson can be the best cornerback in the draft as advertised. While he clearly has ball skills, collecting eight interceptions his senior year at Iowa, flexibility and fluidity, measured by the drills Jackson did not perform well in, are marks of a successful NFL cornerback. While this performance may not have dropped him too far down draft boards, it may have been enough to put question marks into the minds of coaches and general managers.

A big question mark heading into the Combine was whether Joseph had the top-end speed to compete with Division 1 and NFL athletes after easily handling the competition at small-school Dubuque. Joseph was the only Division III cornerback invited to the Combine and he may have showed why by not running in the 40-yard dash and putting up pedestrian numbers in the vertical jump, three-cone and shuttle drills. A player that could have perhaps raised their draft grade into an early Day 3 pick may no longer be draftable in many team’s eyes.

Fitzpatrick is another, like Jackson, that didn’t have a bad day. On the contrary, Fitzpatrick had a great day when compared to the rest of the talented safety class; but when you compare him to Derwin James, Fitzpatrick’s day looked decidedly average. While trying to overtake James as the top safety prospect on the board, Fitzpatrick came up seven bench press reps short of James and well short of the Florida State product in both jump drills; while Fitzpatrick is expected to be an early first-round pick, James is expected to go even earlier. This may be a case of “picked a bad day to be in the same safety draft class as Derwin James.”