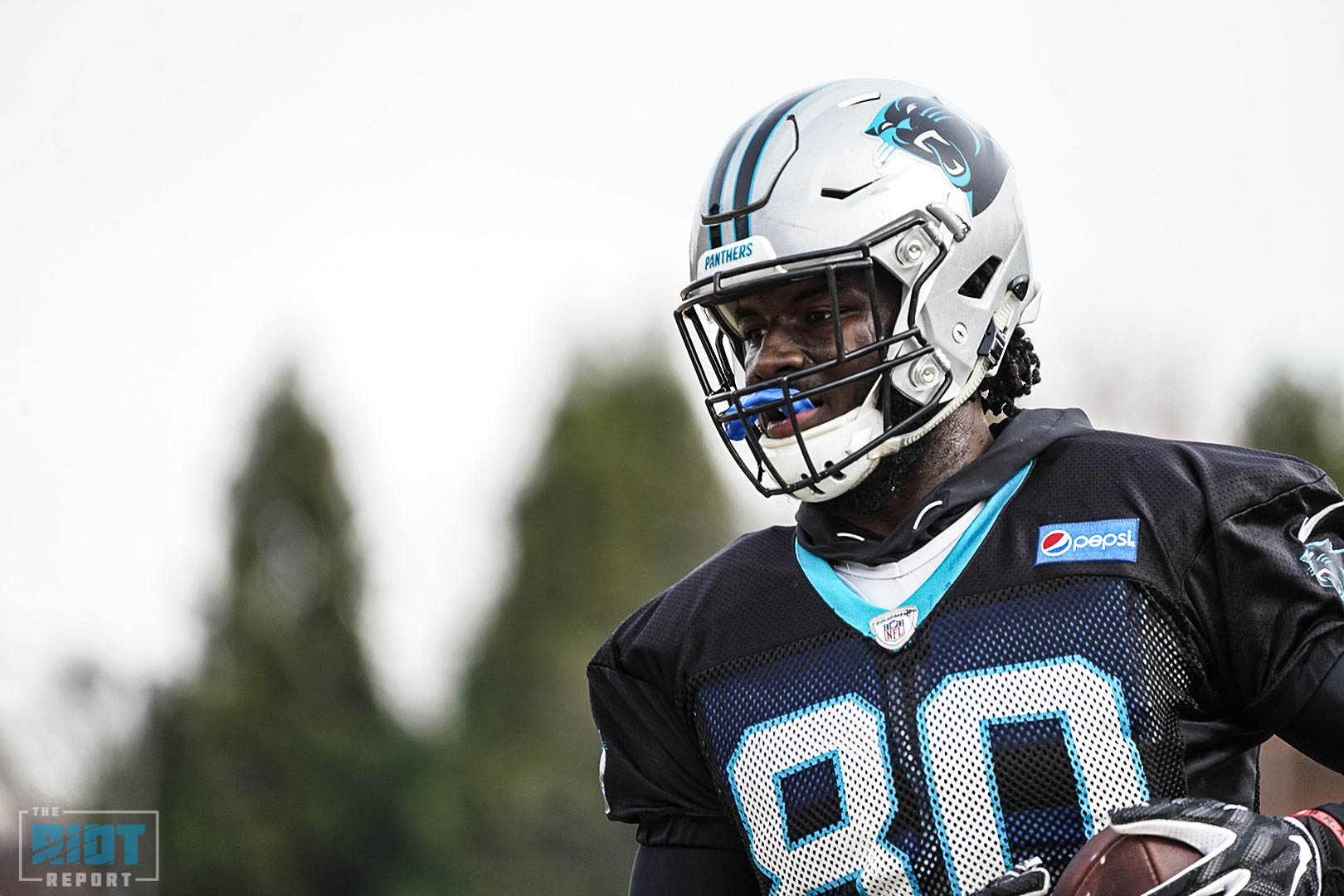 In the history of the NFL scouting combine, among tight ends weighing over 255 pounds – Thomas measured in at 6-4, 259 – he ranks second in the broad jump, 11th in the vertical jump, 15th in the shuttle, 42nd in the three cone and 36th in the 40-yard dash. There are only a handful of players since combine data has been a thing that have been able to compete with that combination of skills, but what he didn’t really have coming out of Indiana was any ability to run routes.

While the Panthers have clearly worked on Thomas’s route running over the season, they did also try and take advantage of his natural athleticism by looking to get him the ball without asking him to really separate – the most common form this took being drag/curl options over the middle, where he would run across the field against man and settle into space against zone. This is something most teams run quite a lot of as it gives a fairly safe option against multiple coverage types and made it easy for Thomas to contribute to the passing game without having to excel as a route runner, and the Panthers used these with Thomas to good effect, with drags such as these:

Being complimented by sit-down routes such as the following:

With the other advantage of these routes being that they work well as natural picks, especially for running backs working out of the backfield:

However, these routes do rely on the quarterback and the receiver being on the same page, and there was at least one time in these two games where this communication broke down, leading to an interception:

But on the whole, this option route can be hugely effective, and the effect it can have beyond simply getting Thomas open is also worth noting. On the following play, the underneath zone defender looks to help inside on the drag route, and this in turn opens up the middle of the field, even if the Panthers weren’t able to take advantage of that on this particular play:

Of course, Thomas can’t just run this one route all the time, but there are a few similar routes which essentially ask him to do the same thing, just in a slightly different way, such as the following outside route:

Or this deeper curl route:

The Panthers used the deep curl a few times with Thomas, often on the backside of a play to work as an intermediate checkdown:

This does require a little bit more from Thomas in terms of route running, but it’s certainly fair to say that the Panthers looked to maximize the impact of his athleticism and potential after the catch as he continued to develop as a route runner.

However, he also showed some nice things as a route runner, and given how raw he was coming out of college, it is encouraging that he was able to develop to this point as a rookie. First, he showed the ability to create space for himself off the line, such as here with the outside step to force the defender wider allowing him to generate inside separation down the field:

He did struggle at times against more physical press coverage, and this is something for him to work on going forward, but he showed the ability to use his size and strength to create separation effectively at the head of routes, such as on the following play where he drives into the frame of the defender before breaking off at the head of the route towards the middle of the field:

This is effectively a subtle push-off, but because he engages with his whole body rather than just his arms, he is highly unlikely to get flagged for it, and in fact is more likely to draw a flag at the head of the route if the defender tries to hold on during the cut. He also showed the ability to create similar separation in more subtle ways, such as on the following play where he keeps his body angled outside, thereby keeping the outside defender well outside of him, thereby giving him more room when he breaks back inside:

Thomas isn’t the finished article as a receiver by any means, but he has the core athletic ability to create problems for defenders in terms of his vertical speed and his ability to create separation at the head of routes – and he showed a nice understanding of how routes worked to get him open, with his strength and power also adding value after the catch.

Going into the 2019 season, Thomas has shown improvement as both a run blocker and a pass protector and should be seen a legitimately well-rounded tight end, with his development as a route runner allowing him to develop from a nice complementary piece to a more integral part of the offense.

Thomas’s improvement as a run blocker looks to be the biggest threat when it comes to making the Panthers’ 2019 roster for Chris Manhertz; while Manhertz has been a very effective blocker to this point, given that he has largely offered little beyond that, if Thomas and/or Alex Armah are able to offer a similar level of play as blockers while also adding something as receivers, Manhertz could find himself surplus, meaning the Panthers could go with only three TEs/FBs or that one of the more receiving-focused TEs on the roster might have an actual shot of making the 53 as opposed to the foursome of Olsen/Thomas/Manhertz/Armah that occupied those slots last season.

On the other side of the coin, it might be worthwhile to carry an extra tight end seeing as your #1 has missed 16 games over the past two seasons.

Certainly something to think about during training camp.