Two Minute Drill: The Drive That Won The Game In Atlanta 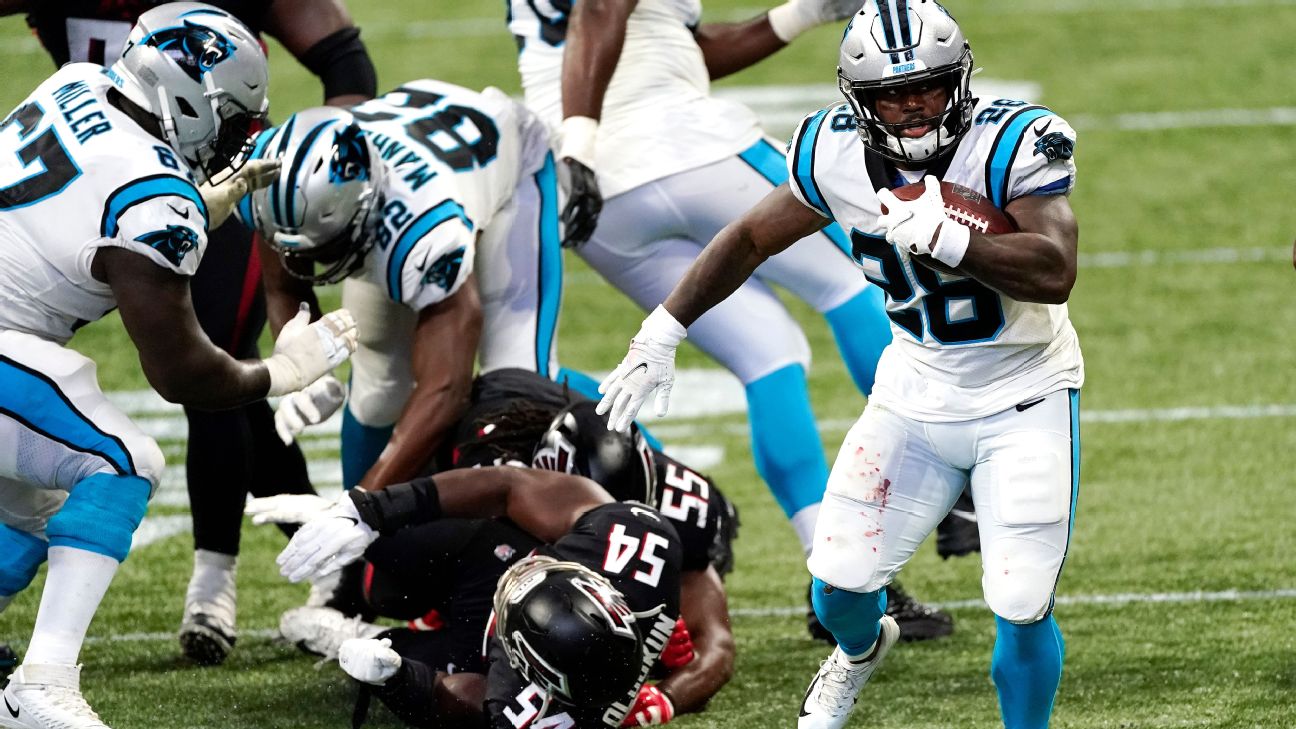 Confounding the expectations of many around the NFL, the Panthers will go into Week 6 with a winning record and tied for the division lead. While an awful lot can – and likely will – change between now and the end of the season, the Panthers have certainly been impressive to this point.

What has been key in their three game winning streak has been the execution at key points in the game; while this extends well beyond the limited example we’ll be examining today, this was on display just before the half at Atlanta when the Panthers drove 89 yards down the field in less than 80 seconds to score the touchdown that would ultimately separate the two sides.

A Little Lucky Against Man

The Falcons were in man coverage for the first couple of snaps of this drive, in both cases having a safety over the top and a defender in an underneath zone to take away the short middle. This can be a really effective coverage if the defense is able to hold up at corner – the Panthers were fortunate to get as much out of it as they did, aided by a sloppy penalty by the Falcons on the first play of the drive:

Here, the Panthers have three defenders running vertically to clear out space with Davis dropping out to the flat – this means that Teddy is really left with only one place to go against man: the flat to Anderson. But here the underneath zone defender is able to compact the window and prevent Anderson from accelerating away from the corner leading to the incompletion. The Panthers got away with it here, but they would do well to avoid running plays where there aren’t multiple options against man.

On the second play, the Falcons again drop into this coverage, and Teddy does well to take a short gain to Davis as the scheme against doesn’t do much to create an open target down the field. This wasn’t a great gain but importantly, even though they hadn’t managed to scheme anything up down the field, the Panthers were able to get positive yardage.

These two plays could very well have ended with the Panthers facing a third-and-10 on their own 11, and while a second-and-8 from your own 28 isn’t a situation of any particular promise, the fact that they were in this situation and not the backed-up long third down made a huge impact on the Panthers’ chances on this drive.

Working Underneath Against Zone

In situations like this, defenses often look to drop into zone and force offenses to settle for short completions in the hope of forcing them to either burn timeouts or run down the clock. However, for the offense, this creates an opportunity for easy yardage, and at very little cost if the receiver is able to get out of bounds. Importantly, even if you do have to give up some time for those yards, the Falcons playing zone in this way made it very easy for the Panthers to pick up 20 yards with two short completions:

Here, as long as Teddy is able to recognize where to go with the ball and make the open throw, these are plays that on a normal drive would be seen as very soft coverage. Yes, the Panthers did burn 34 seconds on these two completions, but that was less than half the clock they had remaining and moved them from halfway inside their own half to the halfway line and still with over 45 seconds on the clock and multiple timeouts remaining.

These completions didn’t lead to the Panthers’ touchdown, but they all-but-ensured the Panthers ability to attempt a makeable field goal on this drive.

Mike Davis has been really impressive since Christian McCaffrey’s injury – and has certainly made a forceful argument for more involvement in the offense when McCaffrey returns – but his play on this drive was probably the most impressive one he has made this season; it was the play that really turned the tables in the Panthers’ favor in terms of their chance to score before the half:

The Falcons are once again in man coverage with a single high zone defender and an underneath zone defender taking away the intermediate middle – the defender covering Davis should, on paper anyway, have been able to sniff this screen out reasonably effectively, but Matt Paradis does a fantastic job of running him wide on the play, leaving Davis with space to make the catch and, importantly, with the middle of the field now open to attack.

It is not clear whether this play was always designed to work back inside, or whether Davis just did a great job of reading the over-pursuit and cut it back, but the bonus effect of this is that the underneath zone defender who dove downhill on the screen initially was then left out of the play by the cut back, and gave Davis a lot of space to run into.

The Panthers also do a really good job of blocking down the field, especially DJ Moore on the near side, with Davis putting the final nail in the coffin by managing to break the tackle and get out of bounds. When you can go 23 yards in six seconds then you are doing well, and here it puts the Panthers on the edge of the red zone with 40 seconds to punch the ball in. The Falcons probably should have done a better job of keeping Davis inbounds at the end, but credit has to go for Davis for having the awareness at the end of the play to make sure he steps out.

The Panthers then decided to take a couple of shots down the field, with the Falcons mirroring vertically in both cases. The first of these ended up in an incompletion ending for Moore in the corner of the end zone:

But the second led to another sizeable gain on the back-shoulder throw to Anderson:

Plays like this are something of a risk – they certainly aren’t a high-percentage way of moving the ball down the field, but with space contracting as you get into the red zone, they become more justifiable risks….especially when you have a pair of receivers in Moore and Anderson who are more than capable of making a play at the catch point when they are facing inexperienced corners.

This is another case where the Panthers could have ended up facing a third-and-10 and a likely field goal, but were able to execute the back-shoulder play and now with timeouts still remaining, were able to focus on trying to force the ball into the end zone with the threat of the run now very much back on the table.

Having largely been constrained to throwing the ball so far on the drive, the Panthers were able to get on run in towards the end; with Samuel in the backfield,  they didn’t necessarily have a number indicator to run the ball, but were able to use a QB option to freeze the backside defender out of the play initially and Samuel was able to get positive yardage and did well to drive forward for as much as he could get:

The Panthers might have had a chance for a score on this play but Reed couldn’t prevent Jarrett from getting back inside of him and closing down the rushing lane inside the left guard. It’s hard to fault Reed for getting beaten by one of the best interior defenders in the NFL, but he really should have stepped forward with his inside leg initially in order to give him the angle to drive Jarrett away from the ball, even if that meant going backwards. This might have been a missed opportunity, but Samuel was still able to get forward movement and keep the momentum working in the Panthers’ favor.

Being able to run the ball also likely helped with the following play, where the Panthers were able to force the Falcons to respect the run, especially now so close to the line, and then were able to exploit this to get Davis open in the flat:

Here, the route by Ian Thomas effectively works to pick the defender in man and leads to a simple throw for a score.

This is good play design and execution and makes for a nice score, but the tale of this touchdown is really in how the Panthers were able to get to the point of having the ball three yards out with 23 seconds still left before the half as opposed to the final play. None of the plays in this drive were spectacular, even if a couple involved some very impressive individual play and good overall execution – but this drive is a great example of how this offense can continue to be effective going forward: by making sure they take the opportunities that are there underneath and not looking to overcomplicate things in an attempt to engineer a big play.

The Panthers still have areas they need to work on on offense, far too many of their drives are still stalling in or around the red zone, but they showed on this drive how effective their passing attack can be, just in time for them to face the NFL’s #1 pass defense in Chicago.

It would be unfair to expect them to march the ball down the field in this way against the Bears with any consistency, but if they can take the lessons of how they are most effective from this drive and use them to attack the Bears’ defense, they might not just be able to beat the Bears, but also take another step in what has been a season of encouraging growth so far.