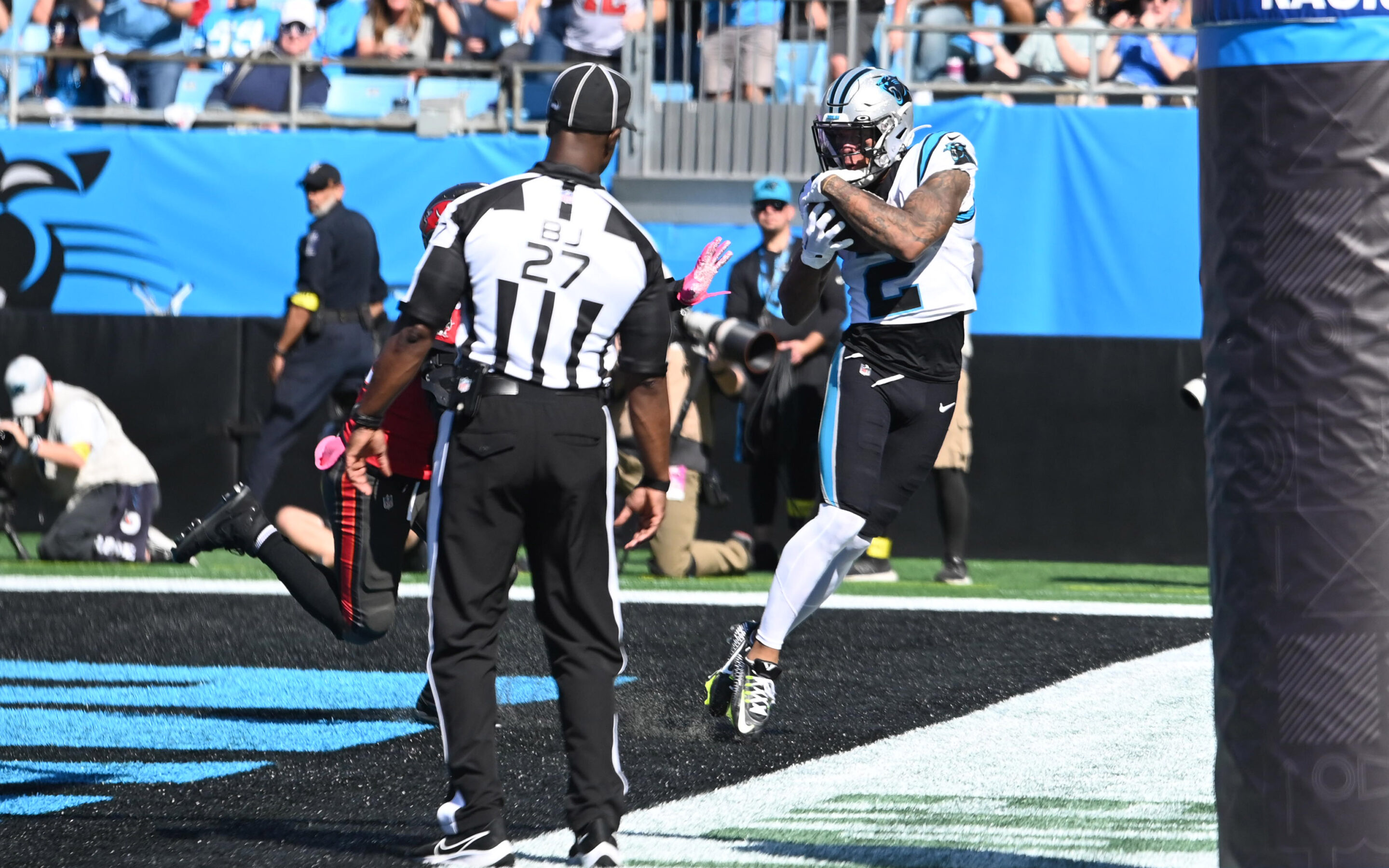 Welcome to the week 8 edition of the Panthers DFS Guide! What a difference a week makes. The Panthers scored three offensive touchdowns and beat down old man Tom Brady and the Buccaneers in week 7. Can the Panthers ride their new found momentum down I-85 in week 8? 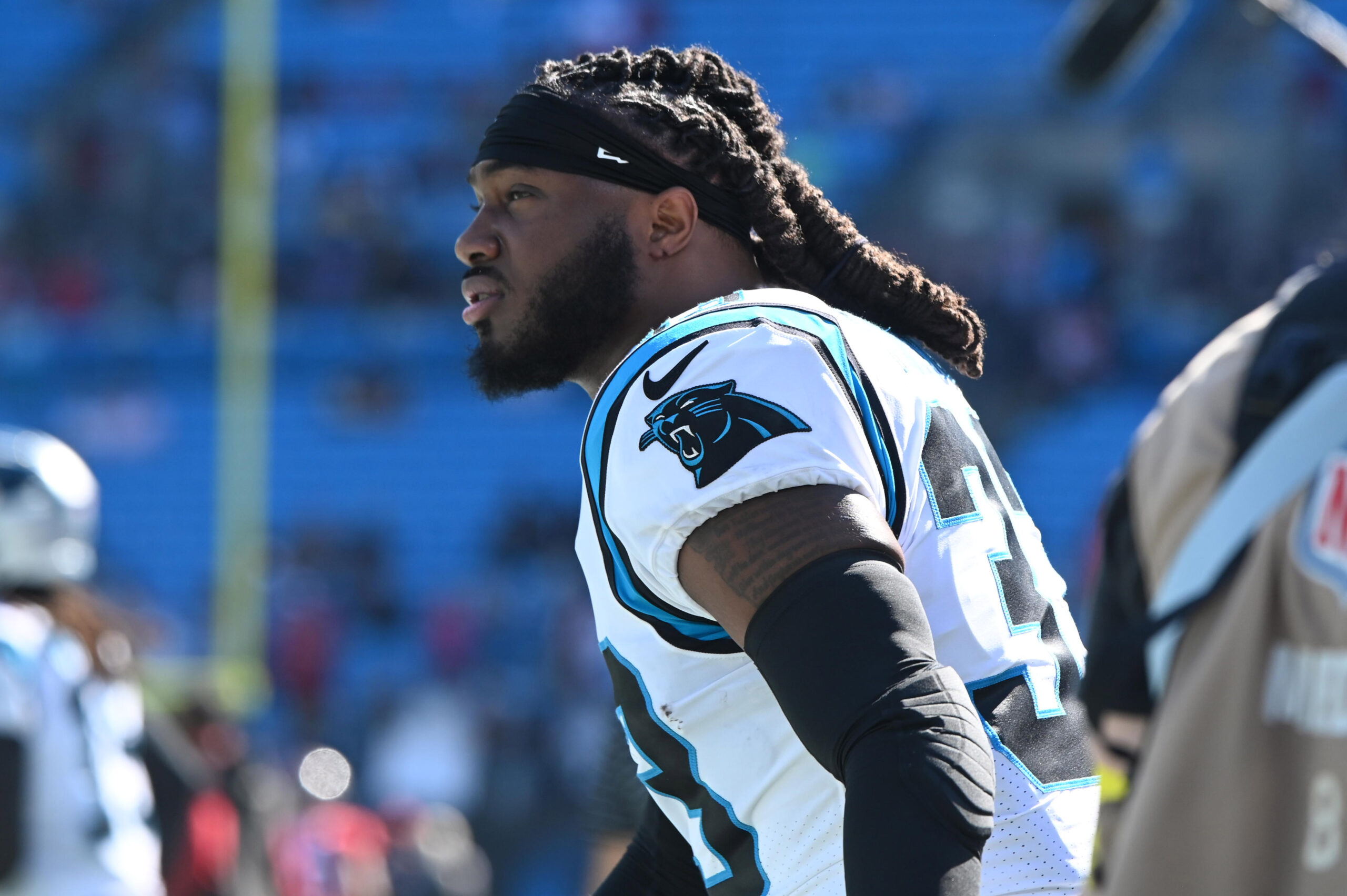 Slate Overview: The week 8 main slate consists of 11 games on DraftKings, FanDuel and Yahoo. It is an odd week as the main slate doesn’t have Patrick Mahomes, Joe Burrow, Josh Allen, Lamar Jackson or Justin Herbert as possible QB options.

The Panthers are 4.5 point underdogs against the Falcons in Atlanta in a game with a total of 41. From a pace perspective – this game projects to be agonizingly slow.

ICYMI – hit on games to target and avoid from a pace perspective. S&P link below.

How slow? On average, the Panthers’ games produce 39 total points a game, which is ninth fewest in the league. Additionally, the Panthers only average 53.8 plays per game. The Falcons are almost as slow as the Panthers and don’t seem interested in passing the ball even though they’ve invested top 10 picks in the last two drafts on Kyle Pitts and Drake London. 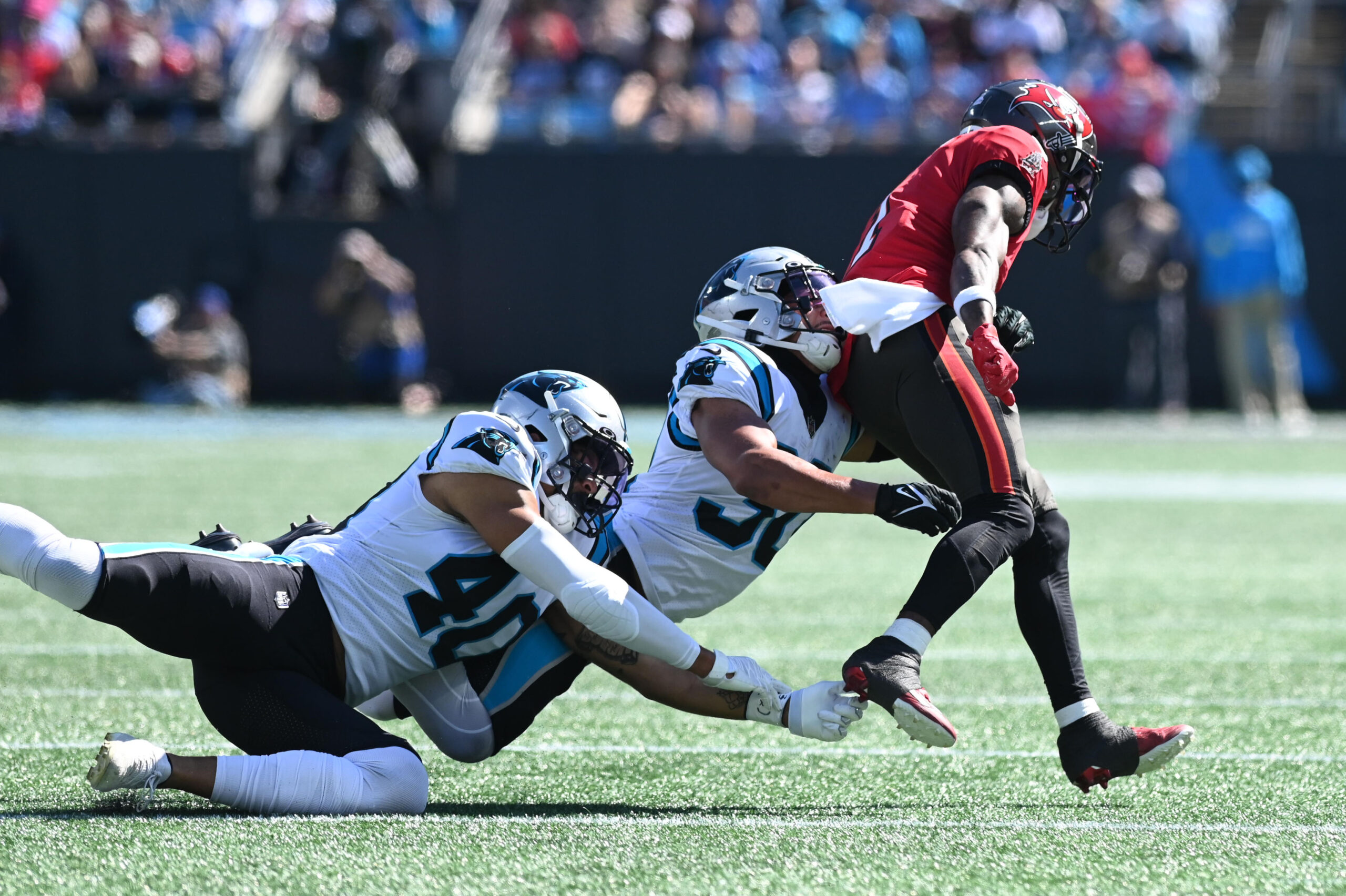 The Falcons ran 41 of their 45 plays against the Bengals while trailing by at least 10 points. Out of those 41 plays, only 13 were passes.

With a slow game environment and low total, should any Panther be targeted? We do have options this week and I outlined them below. This is a great matchup for the Panthers. Why you ask? Check out this nugget from Warren Sharp:

need to protect your inexperienced QB?

need to get him easy completions?

need to pass if you’re behind?

Atlanta is down 3 starting DBs

D.J. Moore: D.J. Moore’s fantasy value rose from the dead a la The Undertaker against Tampa Bay. Moore caught seven passes for 69 yards (both season highs) and a touchdown. He received 10 targets, his second highest total of the season.

The Falcons are down three starters in the secondary, including their top corner in A.J. Terrell. Combine that with Moore’s low price tag, he’s going to be an extremely popular option at the WR spot.

Fire up Moore with confidence in your cash games.

D’Onta Foreman: Even with Chuba Hubbard out, Foreman is too risky for cash games this week. On Friday, Panthers Head Coach Steve Wilks told reporters that he has a “lot of confidence” in Raheem Blackshear and that the backfield would be a committee.

It’s also possible that the Panthers elevate Spencer Brown from the practice squad.

Foreman saw a substantial price increase on each site. He does make for an excellent larger field tournament play as most of the field will look to play Tony Pollard, Kenneth Walker III, Josh Jacobs, Dameon Pierce, Rhamondre Stevenson, Alvin Kamara, Saquon Barkley and some guy named Derrick Henry.

Foreman is projected to be played by 15% of the field as of Saturday morning. That is not as much as the other running backs I listed, so Foreman is a great pivot and offers some salary relief. 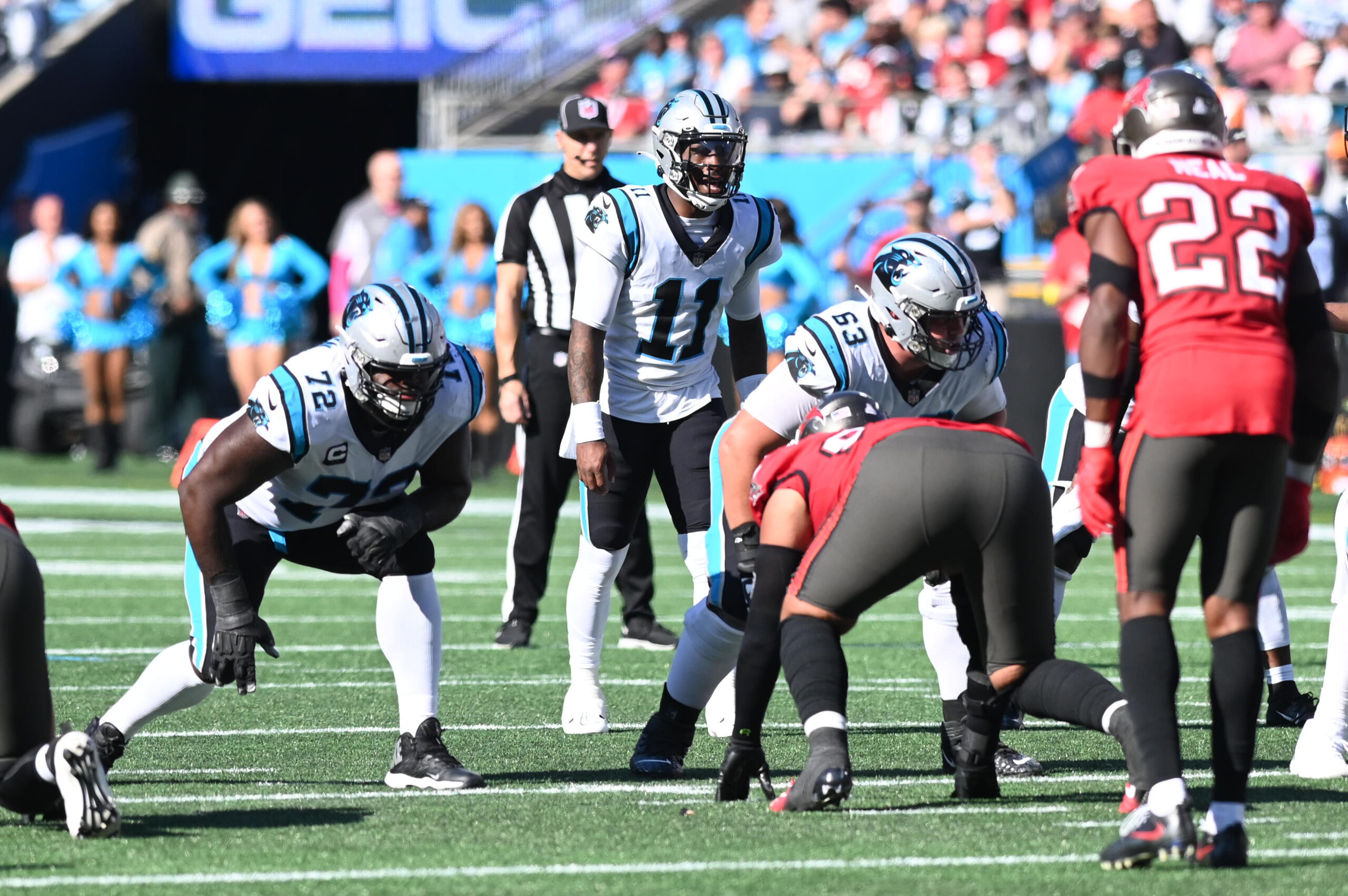 P.J. Walker: Walker got to show off what he could do after being relegated to a glorified screen passer against the Rams.

Although Walker put up his best game as a starter, his fantasy production was moderate. For Walker to win you a tournament, he’ll need to put up 25-30 fantasy points and he hasn’t shown that upside yet.

If you play Walker, you’ll want to play D.J. Moore with him.

Panthers DST: Marcus Mariota has passed the ball a total of 27 times in the last two weeks. Atlanta does not want him to throw it at all. We generally want our defenses to go against mistake prone quarterbacks with a propensity to turn the ball over. In their last three games, Mariota has been sacked 16.13% of his dropbacks.

The Panthers DST is not projected to be a popular play. If they can turn some sacks into turnovers, they can really pay off their salary.

Carolina tight ends: They offer salary relief but they just don’t have enough of a floor to be considered, especially in a matchup with such a low overall point total.

Moore and Foreman would be my favorite captains in this spot. If you use Moore in the captain spot, you should use Walker in one of your flex spots. 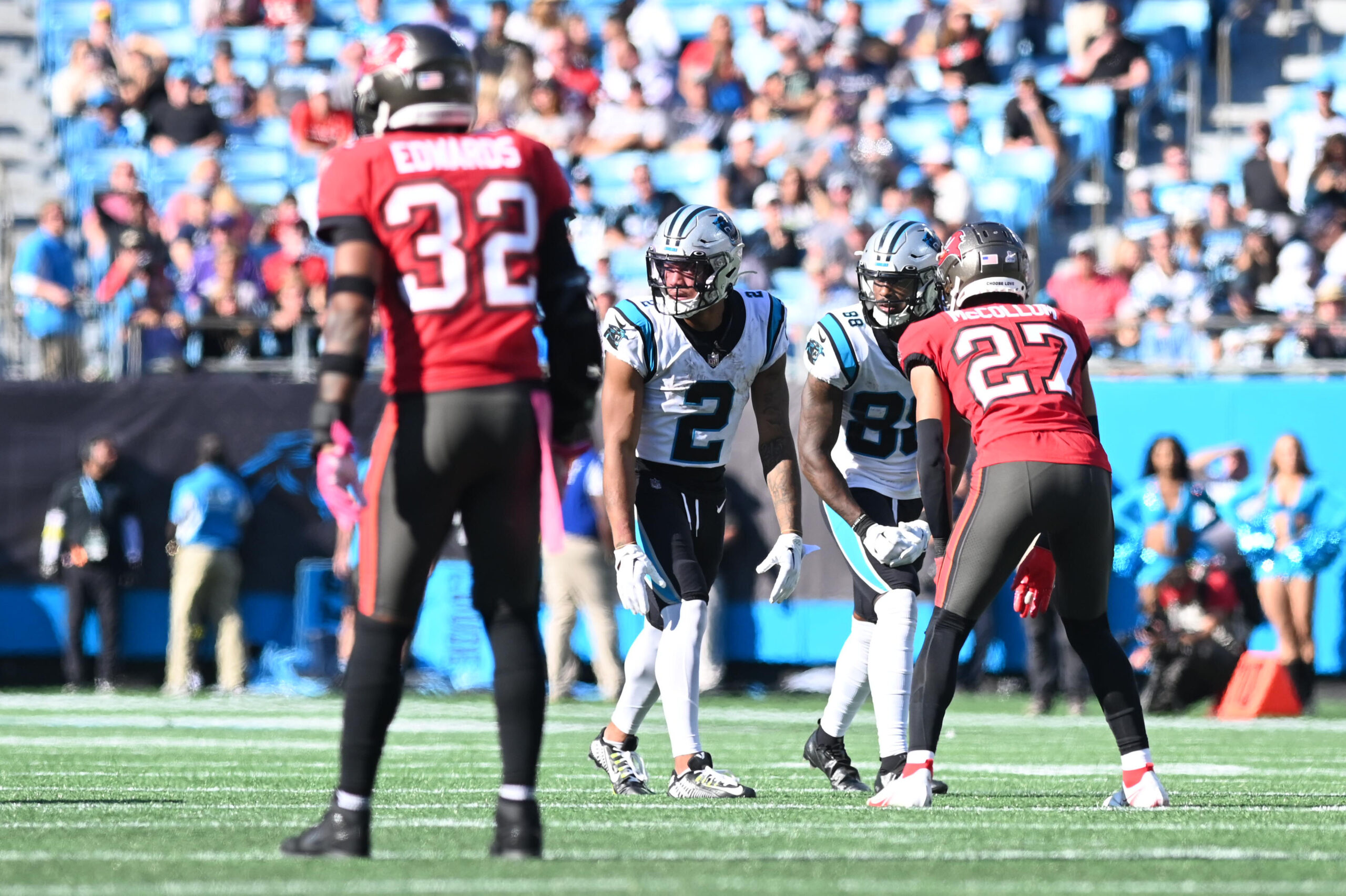 I’d only use Walker as a captain if you believe that he’ll throw for three touchdowns to different Panther receivers or tight ends. If you captain Walker, you’ll want to use Moore, Marshall and one of the tight ends in your flex spots.

Mariota’s rushing ability and usage puts him in play as a possible captain option.

If the Falcons decide to pass the ball, London and Pitts offer contrarian captain options on DraftKings. If you use one of them, you’ll want Mariota paired with them. 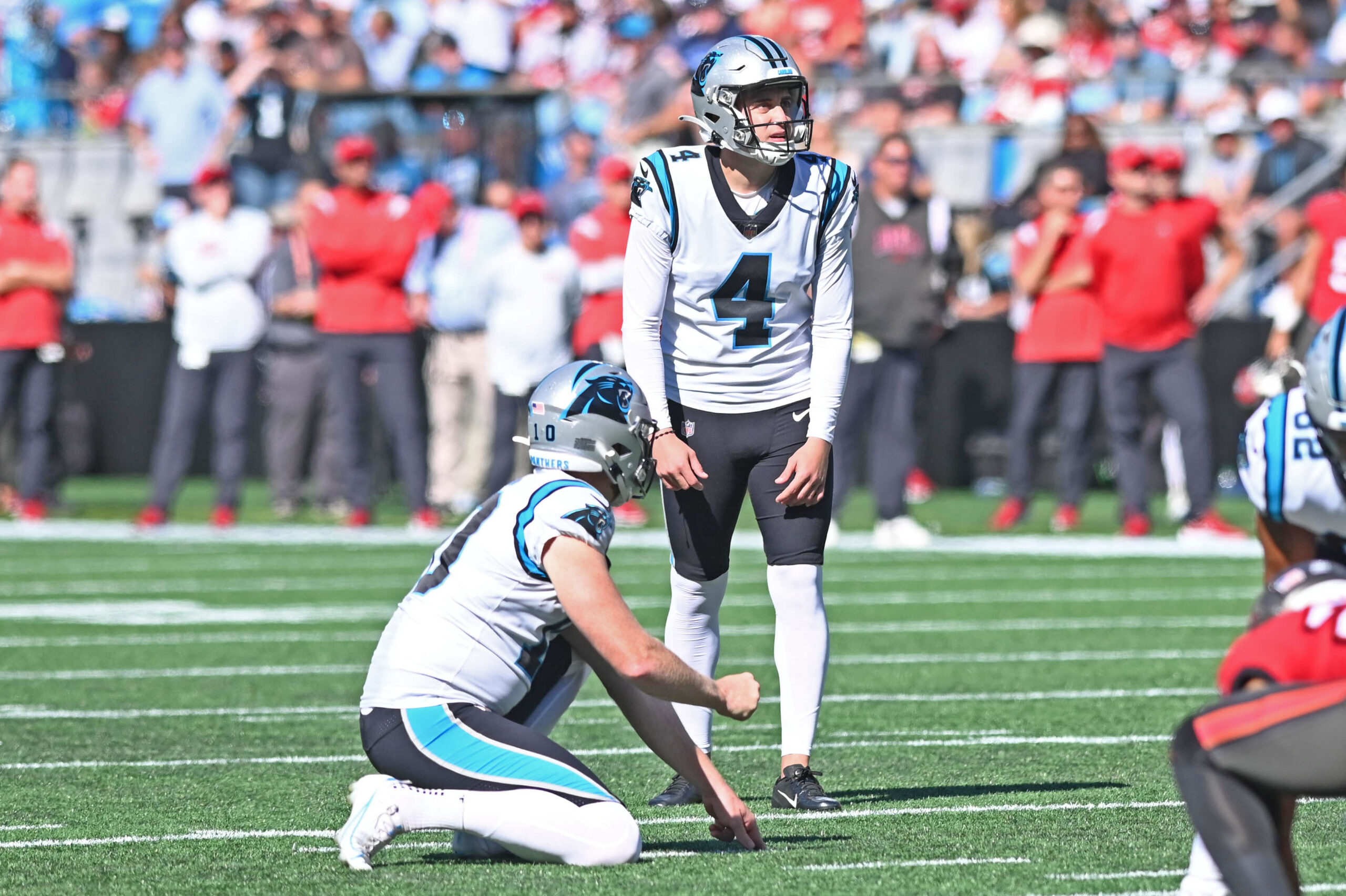 With the low total, both kickers offer salary relief and decent floor projections. Tremble and Thomas can possibly give you a goose egg, but using one in a large field tournament is not the worst play.

Marshall’s price has increased, he may go overlooked and is an excellent single game tournament play against Atlanta’s depleted secondary.