What Can The Panthers Do To Slow Down Myles Garrett? 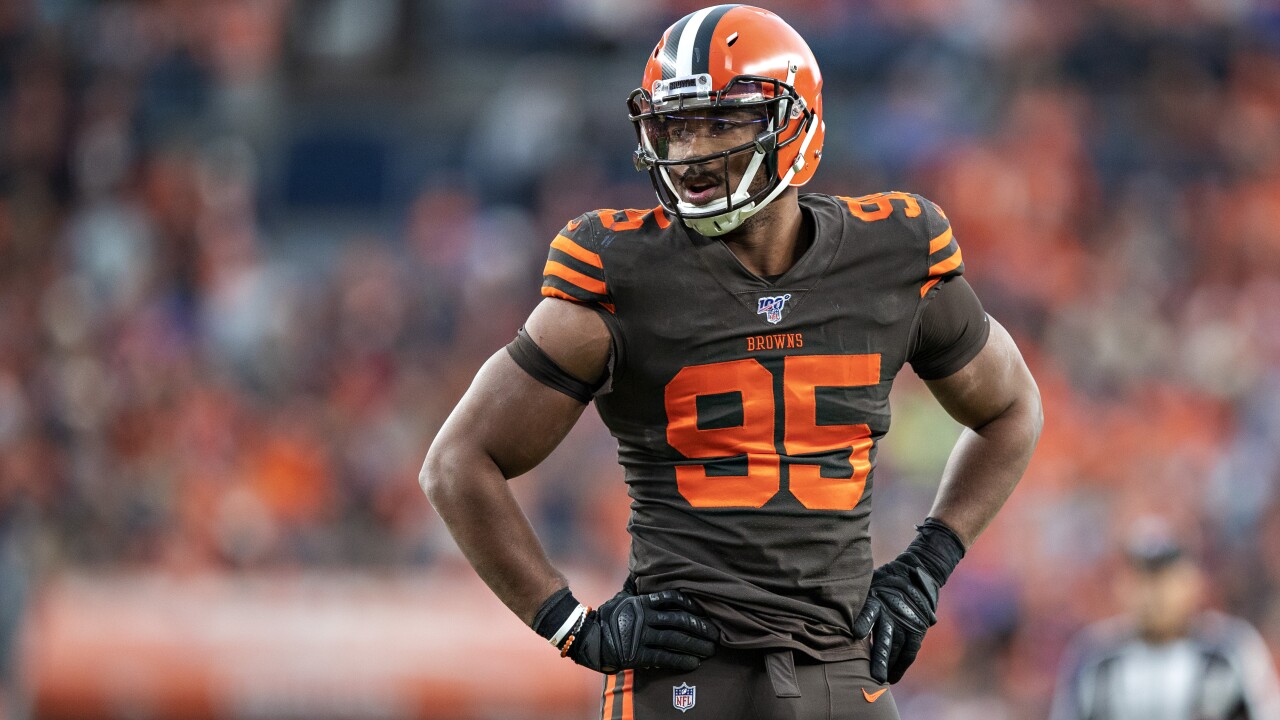 Playing host to the Browns on Sunday, Carolina will be facing what some consider the best edge rusher in football in two-time First Team All-Pro Myles Garrett. Garrett is coming off his finest season yet, with a franchise record 16 sacks, 33 quarterback hits, and an incredible 52 pressures. That shouldn’t be a problem for left tackle Ikem Ekwonu, who’s making his first career start in the NFL, right?

It’s a brutal gauntlet for sure, but it’s a necessary test to see how much Ekwonu will need to improve on right away. And truth be told, Garrett’s usage is versatile enough where the entire offensive line will be on watch. So, as the world focuses on Baker Mayfield’s first game against his former team, the real battle could be located in the trenches. For more on that, let’s dig up the tape of one of the league’s deadliest defensive weapons. 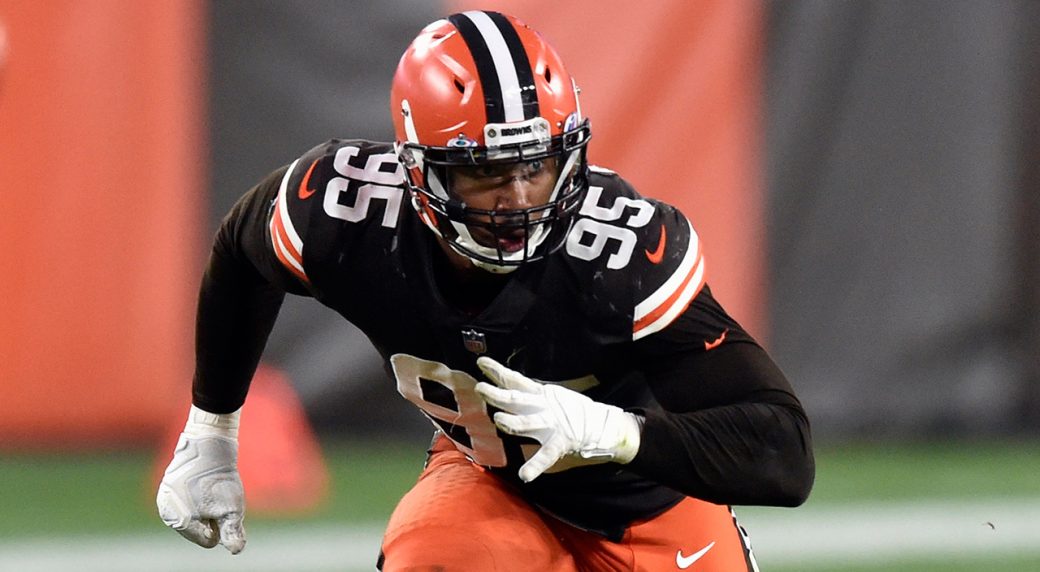 Garrett’s signature trait is his natural ability to time the snap count. Sometimes he’ll be too aggressive and land an offsides penalty or two, which the Panthers can certainly use to their advantage, but that’s usually offset by the many instances where he times it just right, as shown here.

With the snap count dead on, Garrett is able to move at the same time as the left tackle. As he is quicker on this play, he’s able to create leverage using a duck move to tuck under the tackle, completing a vicious bend where he is right in the proximity of Patrick Mahomes. Mahomes is a speedy scrambler outside the pocket, so he’s able to avoid the sack but is ultimately forced to throw the ball away.

This next time, however, Mahomes is not so lucky.

Yet again, keep your eyes peeled on Garrett’s bend. With the help of some quick acceleration, he’s able to muster enough horsepower to duck, bend, and stampede into the quarterback and piggyback him to the turf. A counter via his left hand also helps him easily skate past the left tackle. 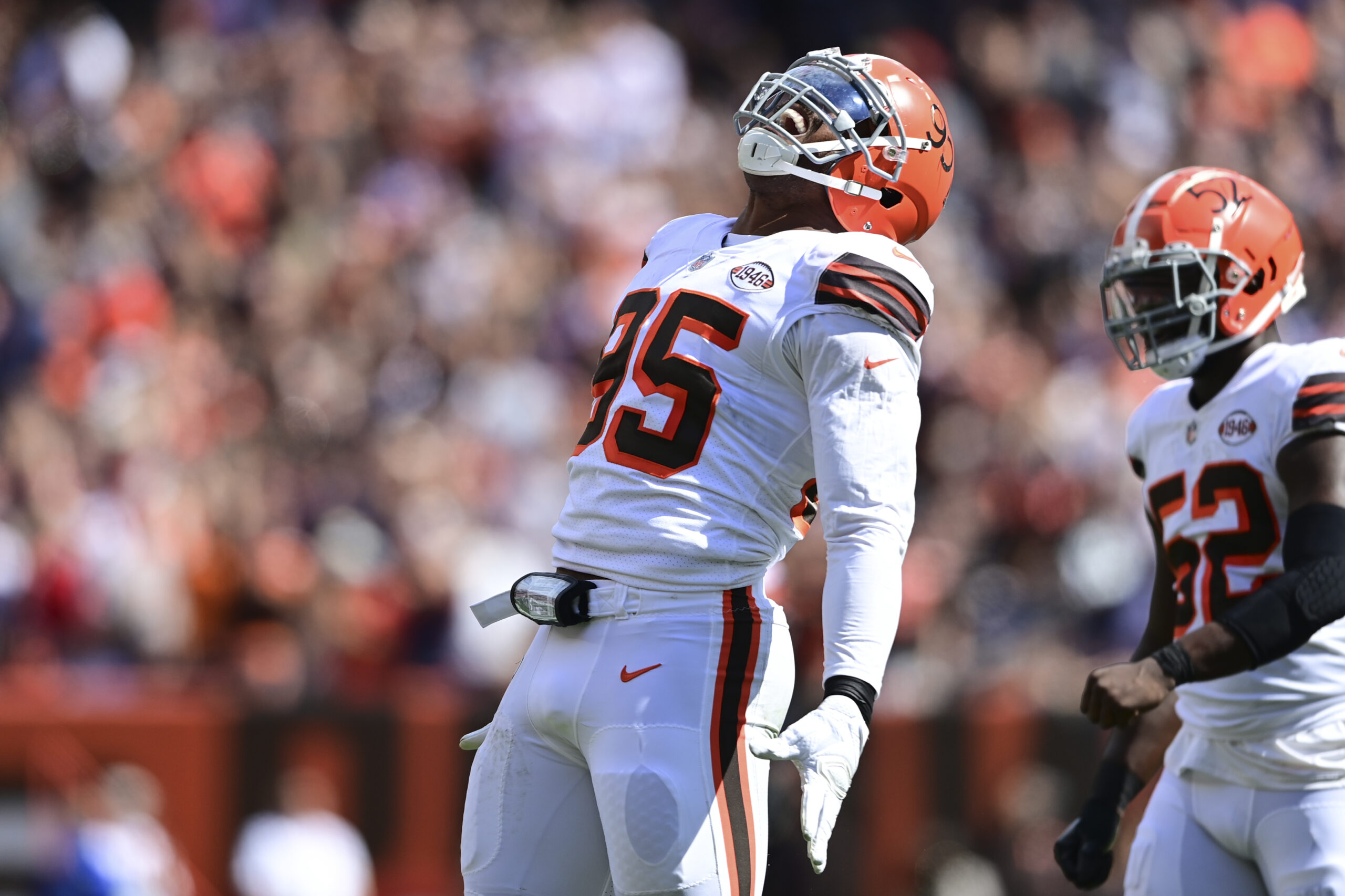 Cleveland Browns defensive end Myles Garrett (95) celebrates a sack during the first half of an NFL football game against the Chicago Bears, Sunday, Sept. 26, 2021, in Cleveland. (AP Photo/David Dermer)

Ikem Ekwonu should ask Justin Fields what it was like for a fellow rookie to face off against Garrett, as the edge rusher sacked him 4.5 times in last year’s Bears-Browns matchup. The entire defensive line feasted on that day to the tune of nine sacks, but it was Garrett who not only reaped the benefits but created opportunities for others.

Here, two linemen put their hands on Garrett in an attempt to block, yet Garrett creates leverage up the B-gap thanks to an inside wipe counter chop, used to knock away the right guard’s outer hand.

What this does is create inside leverage (re: interior pressure), forcing Fields to step up in the pocket and face additional pressure. Eventually, after enough of a fight, Garrett is finally able to bring the quarterback down behind the line of scrimmage. 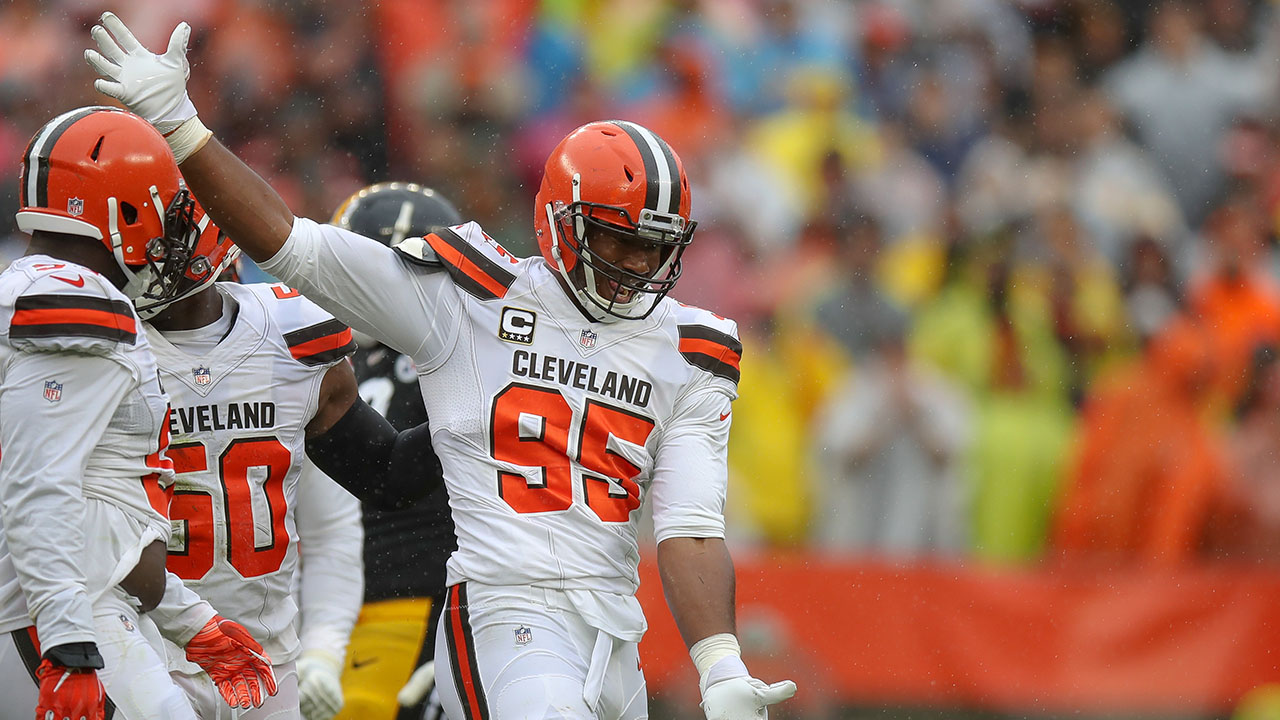 Teams will often double or sometimes triple team Garrett, that’s how fearful they are of his abilities. Here, his presence alone forces the Cardinals’ left line to double team, which in turn frees up space for the C-gap blitz. With both edges in Kyler Murray’s grill, that allows Garrett to eventually clean up the mess he created and come down with the sack.

Oftentimes these double teams create easier opportunities for Garrett’s teammates, and my favorite example goes back to the Bears game.

With a large push off his left foot, Garrett kamikazes and takes out a couple of linemen with bowling ball energy, allowing Malik Jackson (No. 97) to effortlessly execute the interior stunt. With the interior completely exposed, Jackson is able to improve his stat sheet with a sack of Fields. 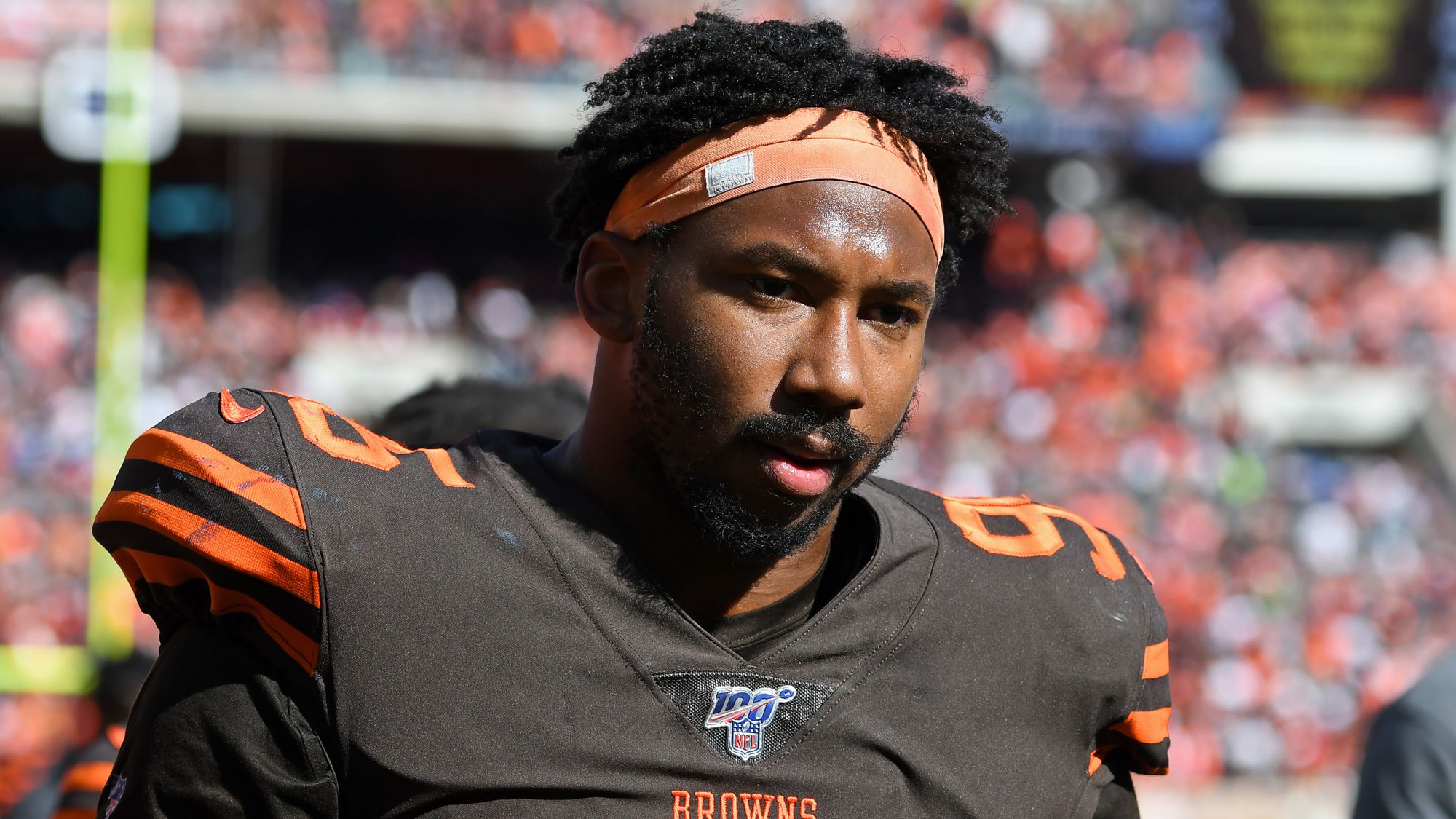 Even if the Panthers decide to put multiple blockers on Garrett, that still might not be enough. In the Ravens’ case, Garrett was able to come through with a sack against triple blocking.

With a powerful bull rush and an inside swim move, he’s able to somehow avoid three blockers with one of the best sacks you’ll see from 2021.

Panthers’ fans will often talk about Brian Burns’ signature pass rushing move, the ghost rush. Not to be outdone is Garrett with his signature move, the eurostep. What he’ll do is fake one way then go the other, push off his left (or right) foot, and glide completely past the linemen.

It’s a move he’ll show from time to time, and it works to perfection against the Bears (again). 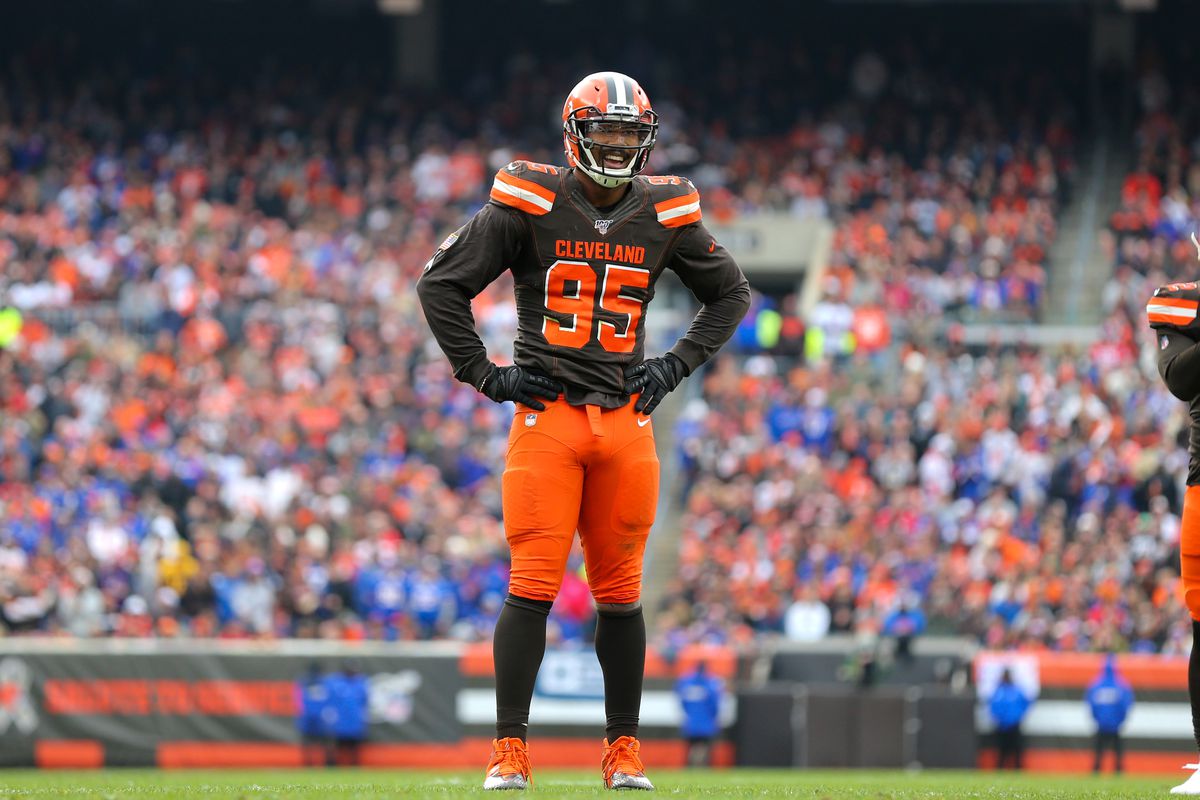 In conclusion, Myles Garrett presents a world of tests for the Panthers. He’s a fluid, violent pass rusher that plays as well attacking the interior as he does the edge. He has a near perfect timing for the snap count, arguably the league’s finest bend, tentacle arms that showcase a wide display of pass rushing moves, and a deadly eurostep that catches pass protectors off guard. His run defense isn’t as talked about, but he’s no slouch there either.

Ikem Ekwonu will not be the only one who faces off against Garrett, but the coaching staff will need to ensure the rookie gets some help against a one-man wrecking crew. Otherwise, it’ll be a long day for the new look offensive line against one of the league’s premiere defenders.