What The Panthers Are Getting From Robby Anderson 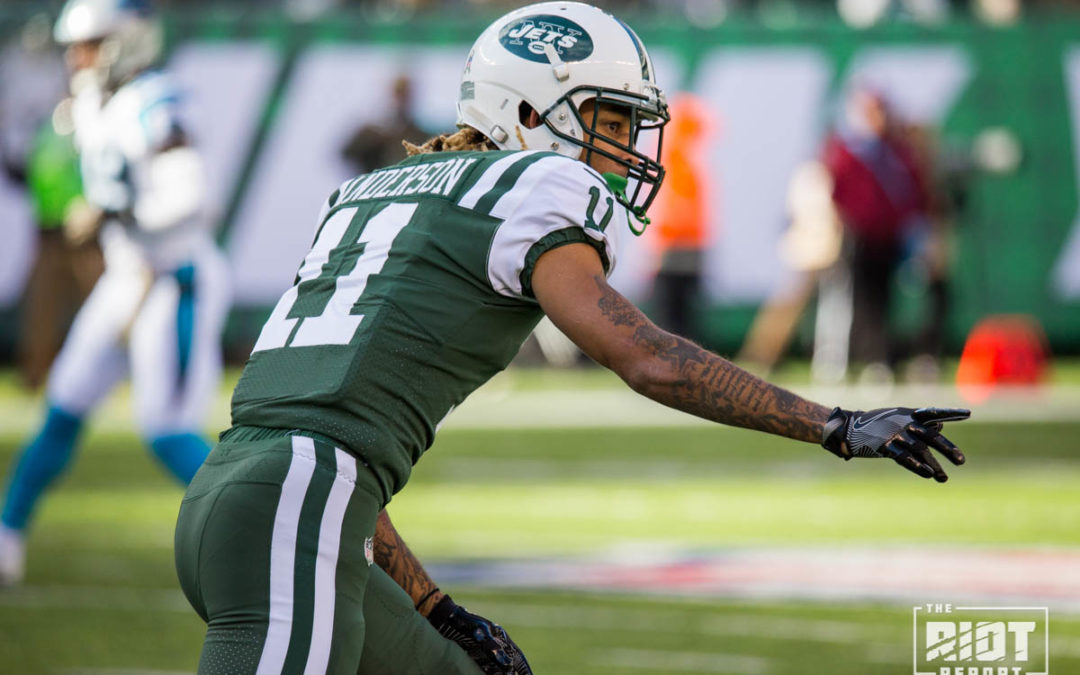 The Panthers are in an interesting situation going into the 2020 season, one that’s left many fans confused as to the team’s direction. Not only has the team’s decision making been a hybrid of rebuilding and retooling this offseason, but the team is attempting to build a high-powered offense at the expense of a defense that – at least on paper in it’s present iteration – looks ill-prepared to deal with Tom Brady, Drew Brees and Matt Ryan six times next year.

Still, the team looks set at the skill positions.

New quarterback Teddy Bridgewater is receiving a supporting cast consisting of Christian McCaffrey, D.J. Moore, Curtis Samuel, Ian Thomas, and new wideout Robby Anderson, not to mention a host of new receivers – most of whom went to Temple. Their biggest signing, Robby Anderson, spent four seasons with the Jets, finishing with at least 750 yards receiving in each of his last three. The move also reunites him with Bridgewater, who he spent an offseason with in New York back in 2018.

In a contract year last season, Anderson caught 52 passes for 779 yards, five touchdowns, and exactly 15 yards per reception. Considering he never reached 1,000 yards receiving and his contract demands, he waited over a week to reach a decision with an outside team, and the Panthers were just the franchise looking to take him on after their new coach Matt Rhule coached the receiver in college. 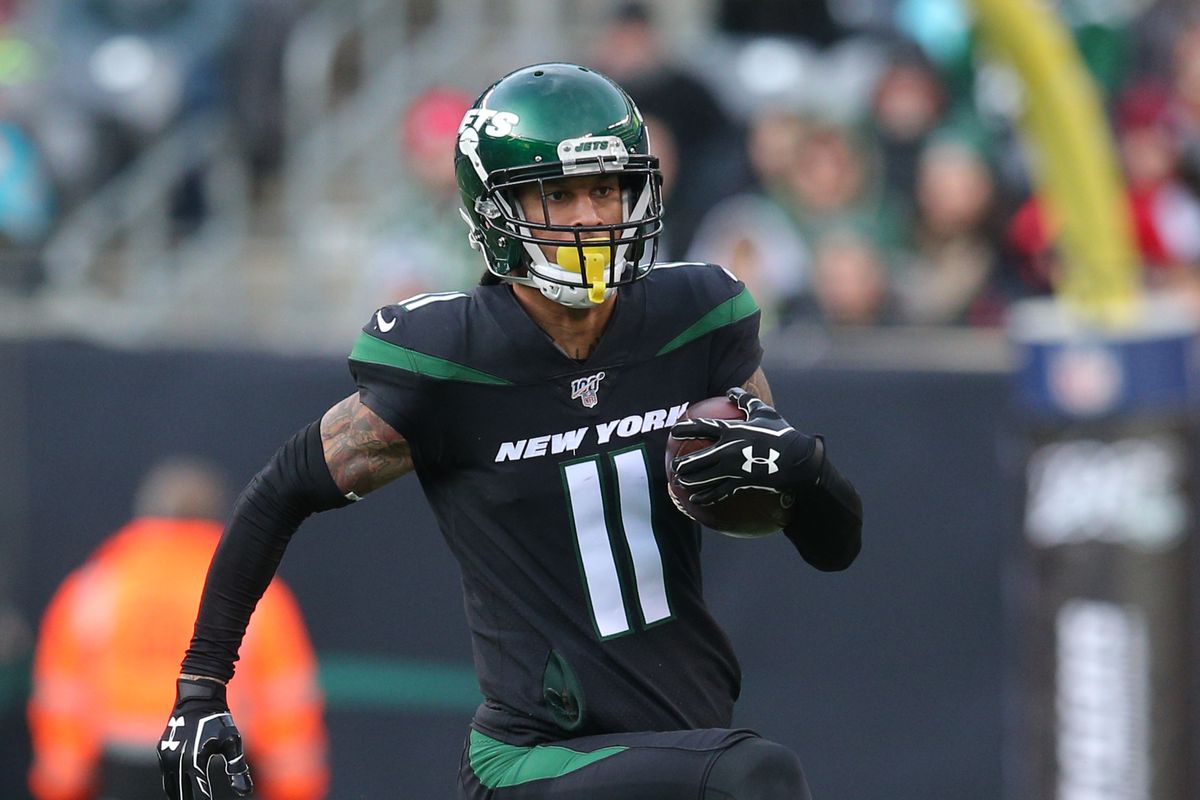 The signing of Anderson virtually means that the Panthers are set at the receiving position in 2019, boasting an even more versatile corps with his arrival. So the question fans may have is what exactly is the franchise going to get from the new signee?

The biggest issue with the Jets offense last season was that they were afraid to stretch the field. Criticism ranged from head coach Adam Gase’s conservative play calling to the quality of the offensive line to even Sam Darnold himself. Regardless of where people stood, the Jets offense finished the season with a league worst 4.6 yards per play.

Panthers fans should not be concerned about the Anderson signing based on this number, though  – even though Carolina themselves finished with 5.1 yards per play, eighth worst. If you want to be worried, you could worry over the fact that Bridgewater has never topped 7.3 yards/attempt in a season. But last year, Anderson and the rest of the Jets offense were handcuffed by a poor offensive line and a limited scheme, and in a more fleshed-out offense from Matt Rhule and Joe Brady, his skillset should be allowed to thrive – if Teddy can get him the ball downfield. 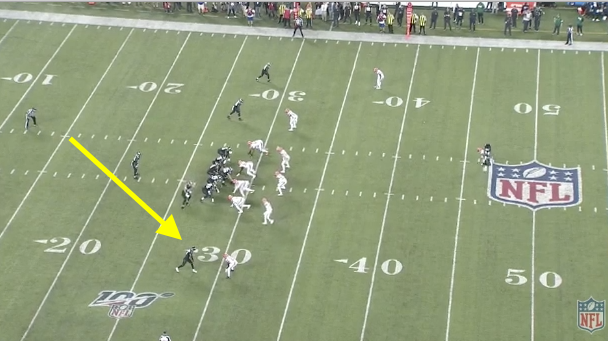 Anderson is best known as a vertical threat in the NFL. His peak level of play can’t match the likes of a prime DeSean Jackson, but he’s managed to be a solid field stretcher, giving him consistent value in the Jets offense.

Here, Anderson uses a stutter step against the Browns corner to bait the DB… 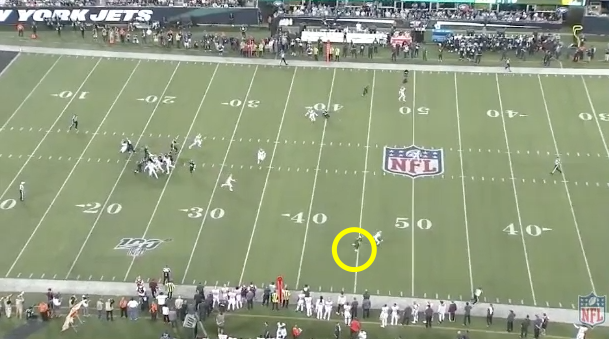 …and this gives his quarterback a chance to throw to his back shoulder.

While not a sensational route, this is one where Anderson’s technique helps his quarterback out in a big way.

He doesn’t try to get to the sideline in a hurry, giving him more space between the corner and the sideline as a result. The little stutter in his route works against the corner’s bail defender technique and makes all the difference in allowing him to catch that pass.

On this next play against the Cowboys, Anderson lowers his head in an attempt to bait the corner into thinking he’s running a curl route.

This works as Anderson is able to create separation and an easy throw for Sam Darnold down the field. The two are able to connect in not only a rare downfield pass from the Jets offense, but a 92-yard touchdown as well.

Anderson’s move here is swift, subtle, and effective – he’s also just able to get by the top safety and break free to the end zone with no Cowboys in his proximity. Not only was this the longest play of the season for the receiver (and it wasn’t even close, as his second longest play went 41 yards against the Ravens) but it was the longest of any play of his career.

Here’s yet another instance of separation from Anderson, this time against the Dolphins.

Notice that the yellow arrow is focused on Anderson’s feet. Right off the snap, the receiver motions his foot left, allowing him to push off said foot…

…and accelerate past the Dolphins corner.

It’s a precise move that’s quite difficult to see upon first viewing because it happens immediately after the ball is snapped, yet works in allowing Anderson to move down the field and giving ample room for Darnold to make this throw. It also helps that he has the speed (he ran a 4.36 40-time at the NFL Combine in 2016) needed to stretch vertically.

Next, let’s observe the aforementioned second-longest play of Anderson’s 2019 season.

Once again, it’s a route that goes down the field – but Anderson plays things a little differently this time. 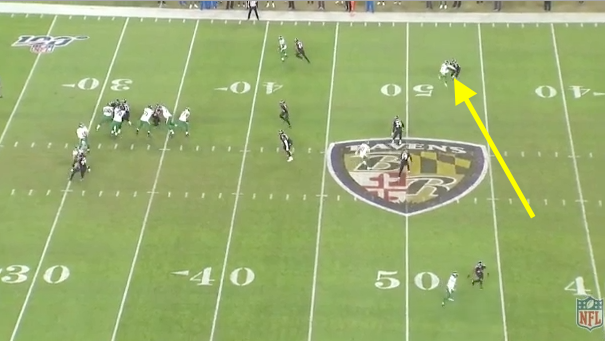 Notice the focus on Anderson’s left hand. His ability to fight off the zone defender is key in helping him separate when crossing the field.

The speed and hand usage allow Anderson to separate long enough to give Darnold a chance to get this pass off. As such, the two are able to connect for a 41-yard pass play.

Now, Anderson’s situation in New Jersey wasn’t perfect (far from it), but there are some issues in his game that will prevent him from likely becoming a WR1 for the Panthers. He’s not much of a threat in the short game, and some may argue that he’s a one-trick pony as a mainly vertical-minded receiver.

One other issue is his consistency against man and press coverage. 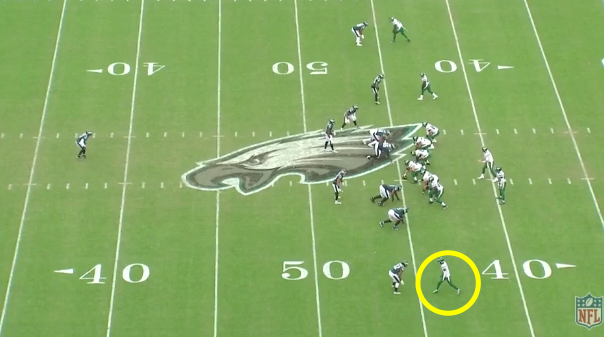 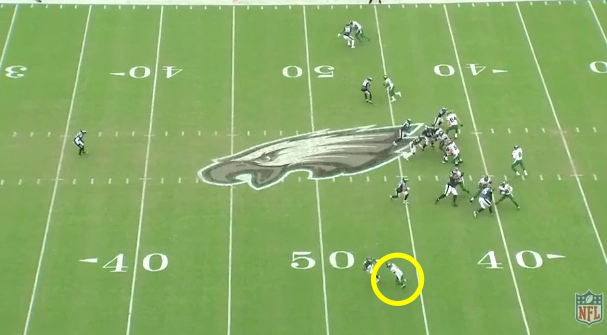 Here against the Eagles, he takes a snap as the left wideout… 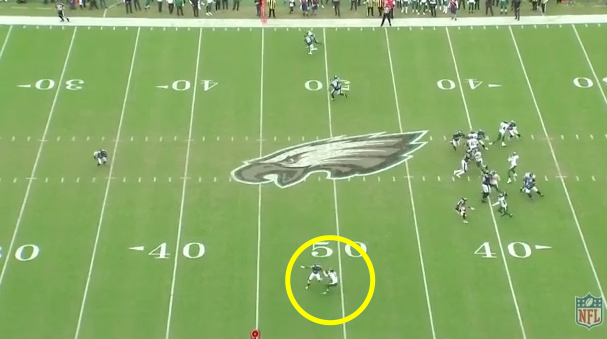 …and with the tight coverage used by the press corner breathing down his neck, Anderson attempts to counter and separate at the top of his route…

…but the pass gets disrupted by the DB.

More toughness at the catch point was needed to make this work, as the Eagles corner was able to get inside Anderson’s catch window and disrupt this pass out of his hands.

Fortunately, Anderson does enough as a receiver where this isn’t a major issue – his speed and usage down the field will add value to the Panthers offense, serving as a nice compliment to the shorter game of D.J. Moore and Christian McCaffrey, and the all-around skillset of Curtis Samuel. The talent is there, but the uncertainty comes from how Joe Brady and Matt Rhule will use their new signing.

All things considered, Robby Anderson’s arrival gives the Panthers a more diverse receiving corps, and as another dimension is added with the vertical spice the New Jersey kid provides, the Panthers offense continues to look like it could be one of the more fun units in 2020.