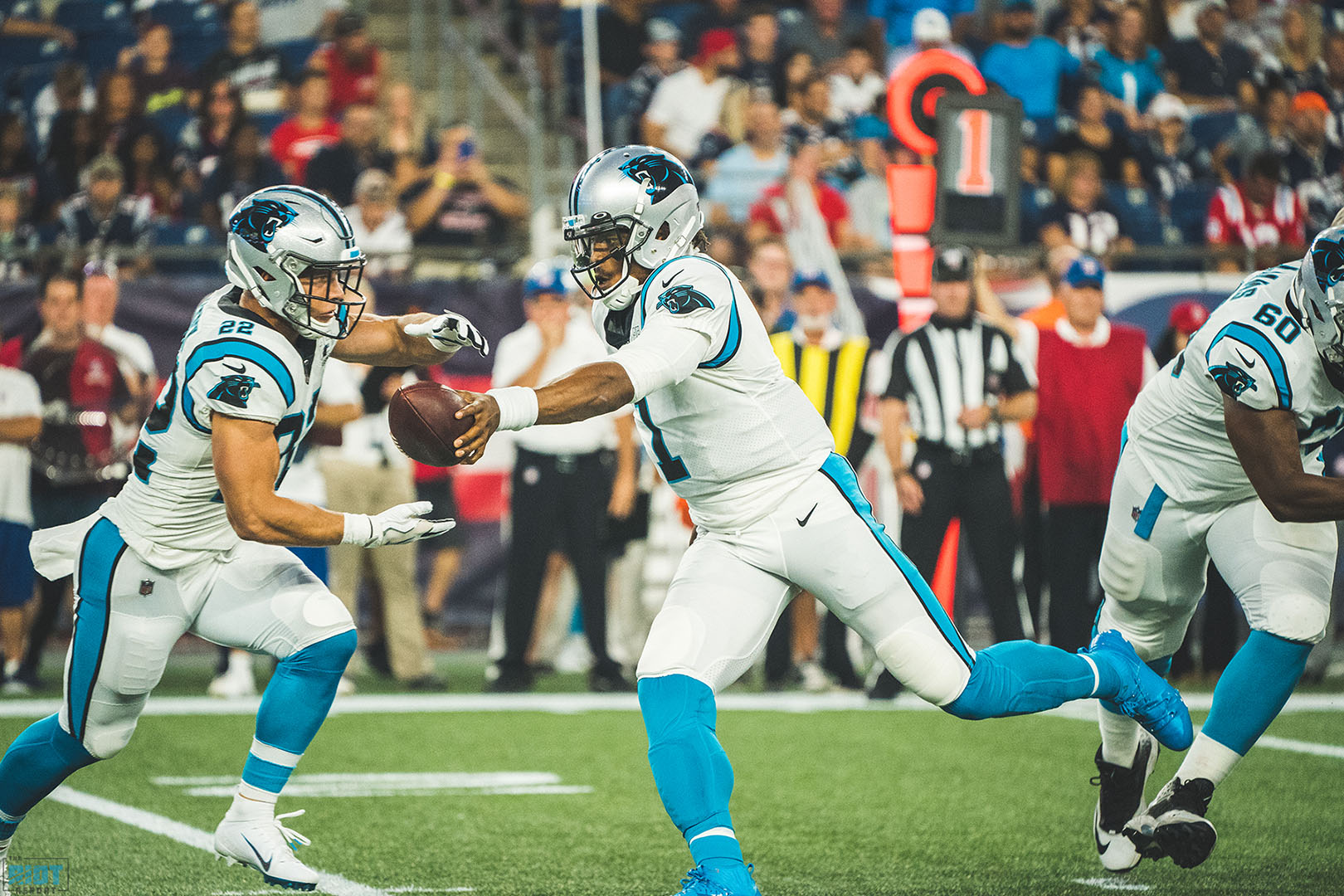 The Panthers didn’t have a great night against the Patriots on offense Thursday night in Foxboro, and while they seem to have managed to dodged a bullet with Cam Newton’s injury being only a sprain, it’s hard to get shut out in the first half as an offense and not see that as something of an issue. When you only run 17 offensive plays in the first half, you probably aren’t doing very well – or you’re doing very well indeed – and when you go 0-for-5 on third down, panic buttons should at least be found – if not actually pushed.

Of course, this is the preseason, the score doesn’t matter, and with teams using but a fraction of their playbooks, it is still possible for teams that have stuttered throughout the preseason to turn up Week 1 and hit the ground at a sprint. However, it is worth exploring why what they did try against the Patriots didn’t work, especially in the first half when the majority of players out there are ones who will be playing on Sundays. So what did go wrong against the Pats, and how on earth might those issues be addressed?

The Panthers’ day really doesn’t get any better when you look at the seventeen plays which featured the starters in more detail.

Of those seventeen, just four put the team ahead of the chains, four gained positive yardage but failed to keep pace with the chains (three of these came on third down), five went for no gain and four ended up going backwards – take that in for a minute, the Panthers had as many offensive plays that went backwards as those that gained at least 3.3 yards per play AKA keeping pace with the chains. More worryingly still, they did all this despite actually performing relatively well on first down.

The Panthers had seven first down plays, including all four of the plays which put the team ahead of the chains, with the three plays that failed to do this being a three-yard run to start the game – which essentially kept pace with the chains – and two incompletions. It is probably not necessary to go into great detail on why a three-yard carry wasn’t a five-yard carry, but the Panthers use of fairly safe, reliable plays such as the following to start the first two drives makes some sense:

Neither of these plays are designed to generate a huge gain, and while the first play in particular could have been improved by some better blocking at the point of attack, both plays gained enough to keep the Panthers at least in sight of the chains. To go with this, the Panthers also had a number of bigger gains on first down, and while none of them were huge chunk plays, they either put the Panthers within a couple of yards of the first down or picked up a first down in one bite.

One was a fairly simple out-breaking route, with good protection against a four-man rush to give Newton time to get the ball out to Samuel:

This is nothing hugely complex, and neither were the other two decent gains, both of which were short underneath passes to the running back in enough space for them to turn upfield and pick up a few extra yards:

In fact, the only two first downs where the Panthers fell noticeably behind the chains were the following two incompletions. The first of these isn’t a horrible play, but with safety help over the top and the corner in good position, Kyle Allen should probably have gone elsewhere – the running back over the middle once again was a decent option:

The only really egregious play was the following throwaway, as having failed to establish any running game at all – notice the general absence of running plays to this point – the Panthers went for a seven-man protection on a hard run fake, with Olsen chipping before leaking to the flat. It didn’t go well:

The issue here is something the Panthers have seen before, most notably on an interception Newton threw against the 49ers back in 2017. When you only really have two legitimate receiving options as the Panthers opt to have here, you are very reliant on the defense biting on the run fake. The Patriots don’t – the safeties stay home, allowing them to double both receivers off the snap and Newton is forced to tuck the ball before throwing it away. Yes, the blocking here could have been better and subbing McCaffrey out on these plays might be a way to reduce his workload without losing anything on the field, but this should serve as a lesson in playcalling as much as anything.

All in all, the Panthers actually did pretty well on first down, picking up a first down on two of the seven occasions and leaving the offense in an average position of 2nd-and-7 on the occasions when they didn’t pick up the first directly. Whatever the issue was against the Patriots, it wasn’t the first downs.

Up Next: Third Downs Were Frustrating