Why Curtis Samuel Is Actually Having A Great 2019 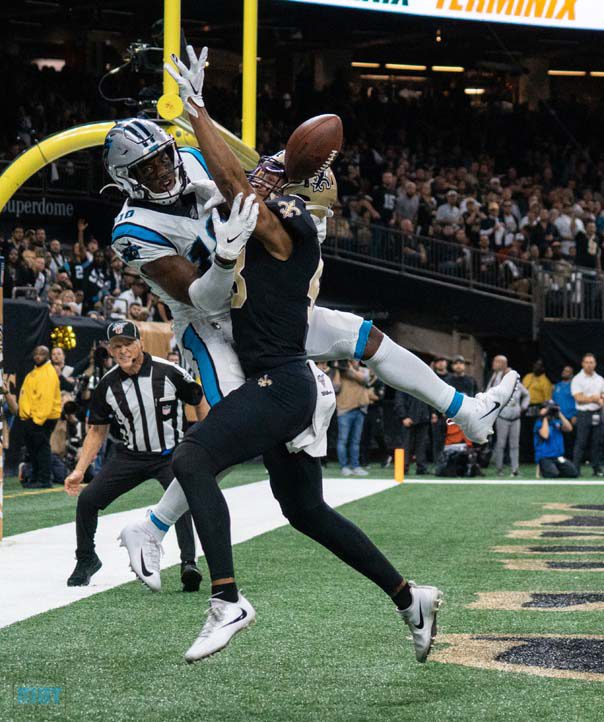 Poised for a breakout season after a training camp where he appeared to be poised to make a huge leap, instead he’s seemed to have been stranded in the middle of nowhere in a bleak season with the Panthers already eliminated from postseason contention.

Through 13 games, Samuel has only 45 catches for 566 yards and five touchdowns. This is far from the expectations many of us had in regards to how his third season would pan out, so upon first instinct, one might think he’s been a draft bust up to this point, especially for a second-round pick.

However, I don’t see that as the case.

In fact, I would go so far as to say Samuel is actually having a great season. This seems ludicrous at first, considering he ranks nowhere near the top 20 in many of the measurable statistics, but something bigger than Samuel has been impacting how much success he’s had this season.

Before we get to what’s impacted Samuel’s production, let’s highlight a few plays he’s made this season, as his positive plays are definitely worth mentioning. Without further delay, let’s get to #10’s touchdown against the Titans in Week 9.

Here, Samuel is lined up as the left wideout on a 2nd and 3, going up against Titans corner Malcolm Butler.

…before cutting back outside on the fade route.

Kyle Allen is able to float this to Samuel for the easy looking touchdown, but what needs to be mentioned is Samuel’s smooth, fluid route running. His quick, ferocious feet school Butler and the corner can’t recover in time to stop the former running back.

But for Samuel’s best play of the season, we have to go back a little further to Week 6 against the Buccaneers in London.

This time, Samuel is up against corner Carlton Davis on the very first play of the fourth quarter.

On any other occasion, this should be an interception, as it’s thrown significantly behind Samuel. There’s no way this ball has any right to be anywhere except in the hands of Davis.

It showed up in the hands of Samuel.

There’s not much I can say about this catch that you can’t already see. The timing, concentration, and ability to snag this pass from the jaws of defeat make this one of the best touchdown grabs you’ll see in 2019.

Even Samuel couldn’t believe it.

Just an unbelievable catch all around.

Granted, Samuel hasn’t been perfect – he’s had a few nasty drops on the season, like the one above. This is a pretty accurate pass that he just can’t haul in, but drops aren’t the bread and butter behind a disappointing season. It’s not even him Samuel himself.

Tthis trend actually began last season when an injured Cam Newton missed Samuel on several opportunities I’m sure he’d love to have back. Via Scott Barrett of Pro Football Focus, Samuel had the sixth highest percentage of plays where he was deemed open between 2017 and 2018 at 79% among all receivers with a double digit average depth of target (Samuel’s aDOT was 12.2 in that span). According to their charting, he only saw an accurate throw on 39% of his targets, ranked 83rd of 89 qualifying receivers.

That was a time where Cam Newton’s discomfort in his throwing arm over the past two seasons led to a decline in his accuracy, so it made sense. Unfortunately, that has not been the case with Allen – it seems as if the second-year quarterback just can’t seem to give Samuel a good ball.

With that in mind, it’s time to look at several examples where Allen gave Samuel the short end of the stick.

Here, Samuel is lined up as the X receiver against off-ball coverage.

Samuel toys with the corner’s blind spot running outside…

…before maneuvering back inside, baiting the defensive back and giving Samuel a huge opportunity for a big play – sadly, the throw is not accurate.

Now, initially it looks like Allen was expecting Samuel to continue running outside, but if that’s the case, this is a poor read due to the position of the defensive back relative to #10. Ultimately, I just think this is a missed throw to an open Samuel. And while I can’t say for certain if this would’ve gone for a touchdown, you can’t let your receiver down after he gives you this much help.

Stay with us, because the road Samuel travels on does not get any easier from here on out.

This time, Samuel lines up against Kevin King on a 1st and 10.

And wouldn’t you know it, Samuel’s speed leaves King in the dust as he takes this to the house for a long touchdown. Or so it would seem.

Instead, Allen underthrows this ball. What should be a touchdown that gets the Panthers back into a one-score game in one play (they were trailing 24-10 at this point) becomes a play where Samuel has to stop and make an effort just to prevent King from intercepting this pass. It’s a waste of great speed on the receiver’s part and highlights the problems with Allen’s arm strength and touch.

This time, the coverage isn’t as tight as it was in the first two plays – Samuel manages to exploit what looks like a busted coverage on a deep post route from the receiver. As a result, you’d think this would be the opportune time for Allen to finally connect with Samuel down the field, but unfortunately that was not meant to be.

Allen puts the ball just out of his reach when this should be an easy touchdown. And that’s been the big issue with Samuel’s statistics this season: he’s been creating plenty of separation and on paper should, in the traditional sense, be having a great season (instead of the more abstract version of “great” that I’m using), but the misses from Allen are holding him back from being one of the premier wide receivers in the NFL.

We’ll end with one last example from last week’s road game against the Falcons.

Once again, Samuel’s fast, snappy head fake takes the wheel and helps him accelerate past the corner, getting him plenty of leverage, as you’ll see below.

At last, Samuel can get his coveted deep touchdown, right?

Some might bring up that D.J. Moore has had greater success than Samuel in spite of facing the same problems of plays being left on the field. It’s true that Moore has improved as a route runner, but in terms of usage, he has it a little easier than Samuel – at least in my opinion. In terms of average target distance (according to Player Profiler), Moore is at 11.3 yards per target, while Samuel’s is significantly higher at 15.0.

This explains why Kyle Allen has had an easier time throwing to Moore than Samuel. Either way, there’s been too many plays left on the field to count Samuel’s potential out at this point. His raw statistics may suggest he’s a draft bust, but his tape suggests anything but.

In terms of skillset, Curtis Samuel reminds me of Stefon Diggs – he’s a very fluid route runner with incredible deep cuts, great balance on his route running, and extremely quick hip movements which allow him to turn on a dot. And like Diggs, Samuel has that all-around quality to him that allows him to work well as a vertical option while also offering the prowess in the short/intermediate areas of the field, and he can also set himself up for yards after the catch thanks to his speed and elusiveness.

So don’t believe the raw statistics. I think Samuel is having a great season, even if it isn’t in the traditional sense we’d all like it to be. I don’t know how many yards Kyle Allen has left on the field targeting Samuel, but it feels endless. It’s a shame because with a receiver as talented as Samuel, it should be easy to have an explosive passing offense – especially with Moore on the other side of the field.

In a season where Samuel’s breakout campaign has been on hold thanks to a connection that isn’t there, this isn’t due to a lack of talent, effort, or chances. It’s clear Samuel has all the talent, puts in all the effort, and has given his quarterback many chances to succeed.

It just hasn’t happened yet.