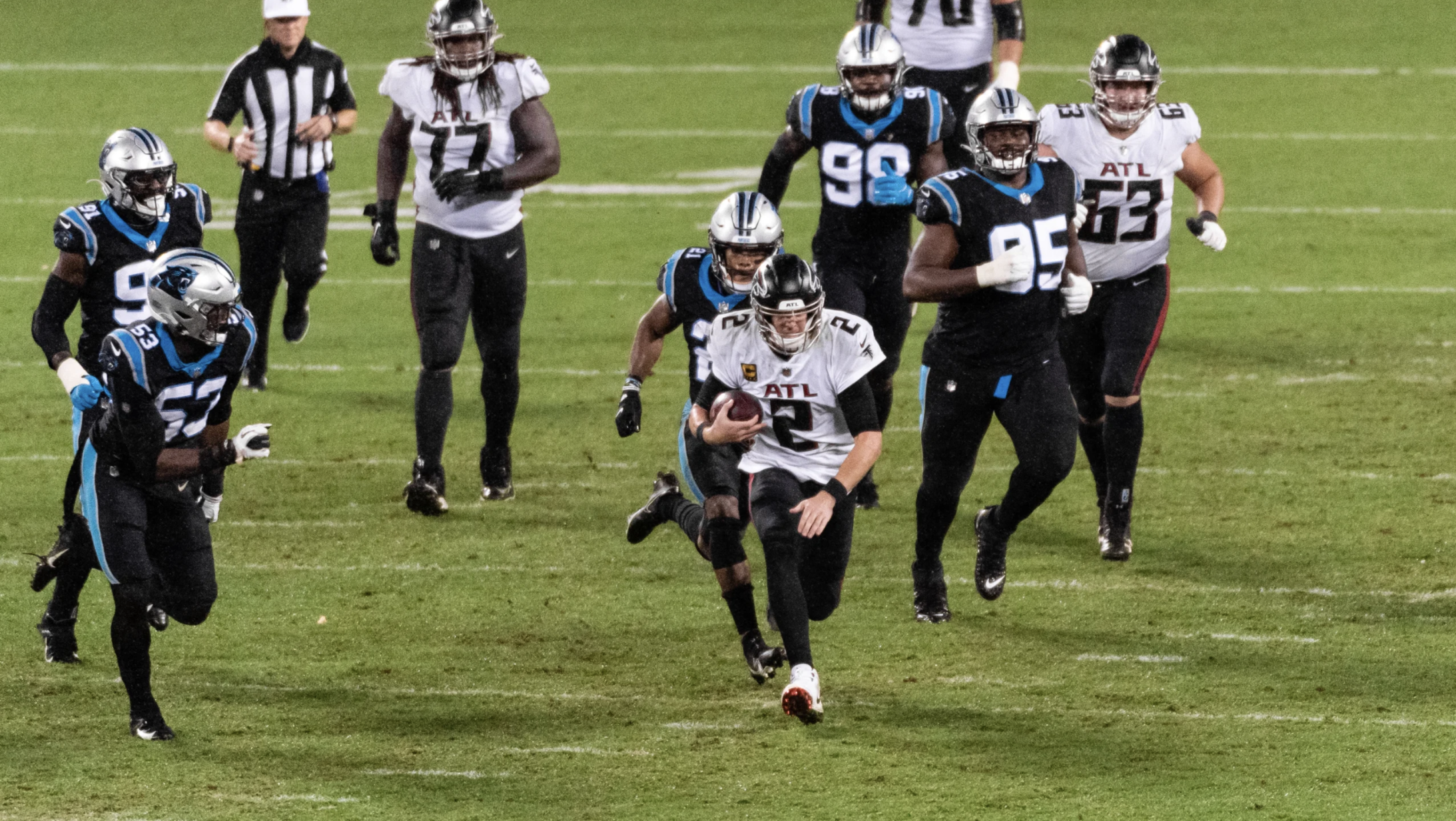 Three games ago, Matt Rhule’s Panthers were one of the very best stories in all the NFL. They were 3-2, on a three-game winning streak, and with a green roster full of young players suddenly punching above their weight, Carolina suddenly looked like an unlikely contender in the NFC South. After an 0-2 start and great uncertainty as to just what the ceiling of the 2020 Panthers was, those three games of success were a pleasant and welcome development.

But sustaining success, short-term and long-term alike, has long been an issue for Carolina. And when the clock hit triple zero on Thursday night, the Panthers were reminded as to just where they currently stand in their first and only primetime showcase of the season.

It wasn’t just that Week Eight’s loss to the Atlanta Falcons was their third straight loss, dropping them to 3-5 at the halfway point of the year. And it wasn’t just that the 2-6 Falcons simply outplayed them: The Panthers did very little to help themselves in a one score game, and the faults that cost them the game were the very characteristics of the young, rebuilding team that they made people forget that they were.

Early in the second quarter, the Panthers raced out to a 14-6 lead by virtue of two Curtis Samuel touchdowns and did well to hold the Falcons to field goals. Then came the slow burn of unforced errors and sloppy execution by inexperienced personnel: The Panthers couldn’t sustain drives on third or fourth down, and couldn’t stop the Falcons from extending their own – three key third-down penalties came from rookies in the secondary. The Panthers’ defensive line couldn’t impact Matt Ryan, nor could their offensive line stop Atlanta from getting in Teddy Bridgewater’s face – Bridgewater was under duress most of the night and Deion Jones alone had a sack and three QB hits.

It wasn’t as though one side of the ball let down the other, or the Panthers were simply the victims of hard luck. In Matt Rhule’s eyes, Thursday’s 25-17 outcome was a total team effort.

“I don’t think any of us played real well tonight,” said Rhule simply.

The chief culprits were physical – namely, not controlling the line of scrimmage – as well as mental. Particularly troubling was how as the game progressed, the Panthers’ penalties mounted: After being penalized only once in the first half, Carolina committed a total of five penalties in the second half – four of which meant first downs for Atlanta.

“We committed a lot of penalties, so we were hurting ourselves a lot of the time,” said safety Jeremy Chinn. “I’m not quite sure why the penalties added up in the second half compared to the first half, but it definitely hurt us.” 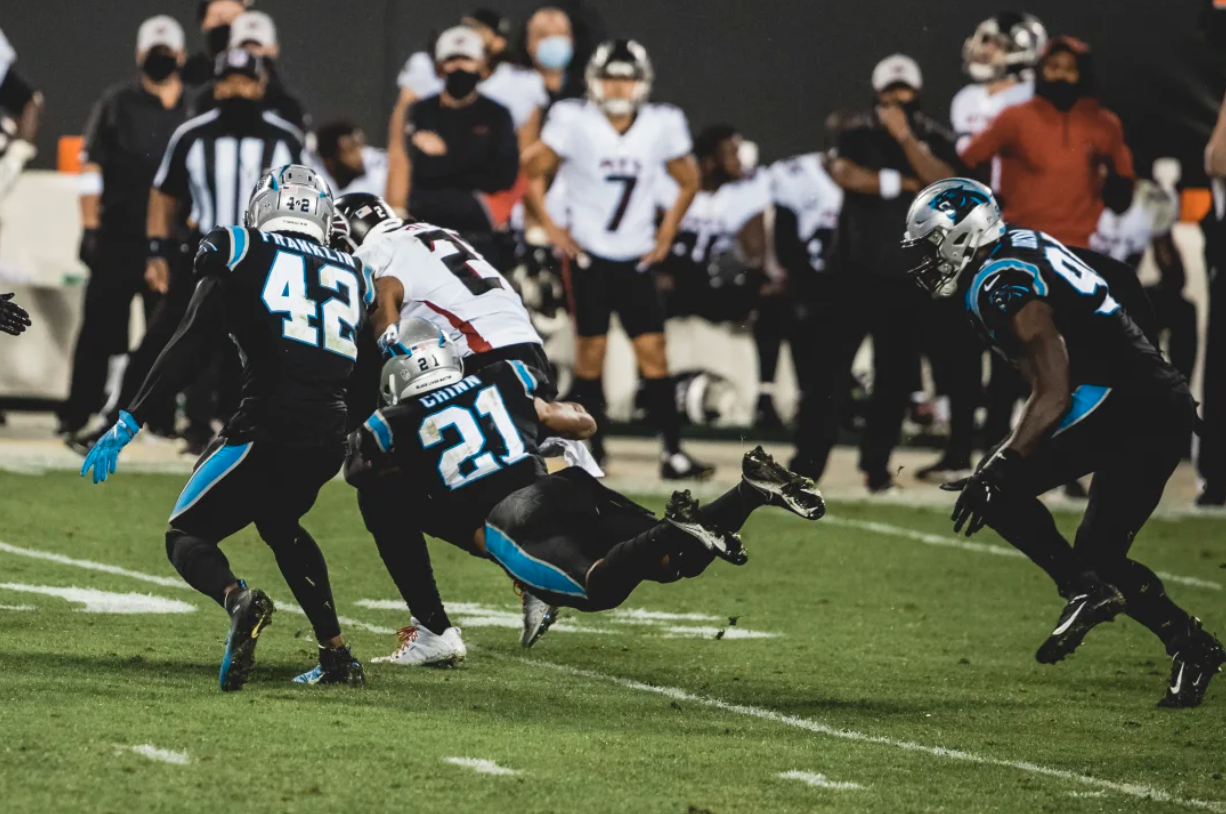 This was very much a winnable game for Carolina, as there were plenty of moments that could have been the difference: Curtis Samuel had an excellent first half, displaying tough running on one touchdown and making an excellent catch on another. Jeremy Chinn created a momentum swing with a heads up play, recognizing he had a short edge and gaining 28 yards on a fake punt that Rhule had initially called off. Teddy Bridgewater showed his toughness, coming back in the game after an illegal hit by the Falcons forced him to be evaluated for a concussion.

Related:   It Is What It Is: Matt Rhule, Curtis Samuel & Tre Boston

But while all teams can make plays to win games, a defining characteristic of the best teams in the NFL is that they don’t make the sort of silly mistakes that lose them. And that’s precisely the difference between the the elite of pro football and where Carolina currently stands.

Teams like Kansas City, Baltimore, and Pittsburgh don’t make stops only to be flagged and kept on the field. Nor do they get blown off the ball and fail spectacularly when trying to convert fourth-and-shorts. These and other mistakes are indicative of an inexperienced, inconsistent rebuilding team still figuring out the basics of good football on the fly – which is exactly what the Panthers are.

That’s not to say that’s a bad thing: Given the extremely low expectations the Panthers entered the season with, 3-5 is quite a respectable record to have at the halfway point. They’ve been competitive in all of their games, have shown resilience in the adversity of losing their All-Pro running back, and are clearly playing hard for both their team and their coaches.

At this point in the season, it’s become clear which teams are the studs and the stiffs in the NFL. And though they don’t belong in the same sentence as the studs, they certainly aren’t stiffs either. 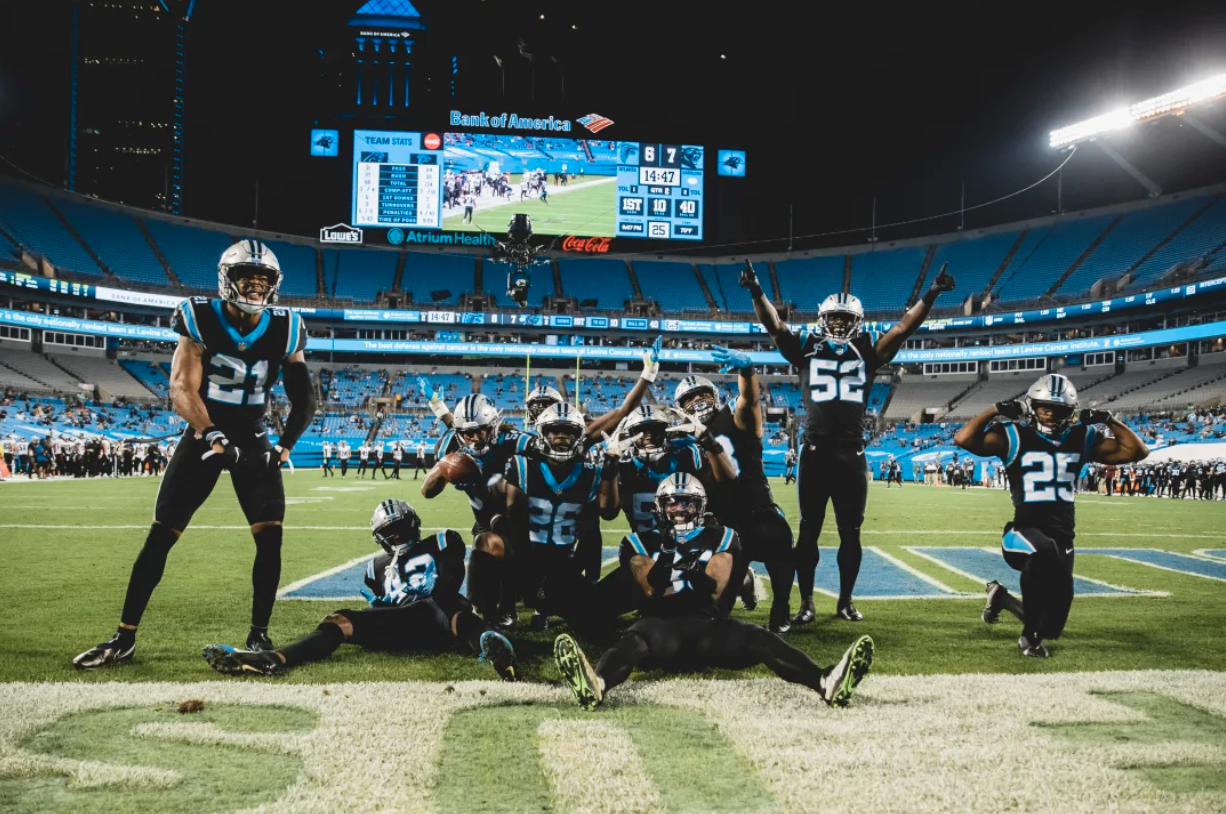 Even so, how the Panthers respond after the “mini-Bye” that follows a short week is going to go a long way towards determining the true character of their team. Their schedule gets no easier, as they have to go up against the defending Super Bowl Champion Kansas City Chiefs and a red hot Tampa Bay Buccaneers team. If they aren’t careful, their three-game losing streak could spiral into four or five games – just like the past two seasons of second half collapses for Carolina.

“The biggest thing is when we hurt ourselves – it’s the only time people are moving the ball on us,” said safety Tre Boston. “That is what we’re noticing on film, it’s a guy out of his gap, it’s a guy with a penalty, it’s a guy out of zone. We’re not getting hurt because the guys are so much more special than us, we just have to do a better job at our job.”

“…A lot of what is happening to us isn’t the other team, it’s us hurting ourselves. Once we eliminate that, I see us being a great team.”

Being what the Panthers want to be in 2020 – a winning team, perhaps even a playoff one – is still a possibility for them. They have exhibited that they are perfectly capable of playing winning football, and in doing so have already defied those who thought they were set to be one of the worst teams in the league. It certainly doesn’t hurt that they’ll soon get Christian McCaffrey, by far their best player, back after six games missed due to a high ankle sprain.

They won’t be their ideal selves, though, until they stop beating themselves with the mistakes of raw rebuilding teams. Which, beneath the veil of optimism and momentum, is simply them being themselves.