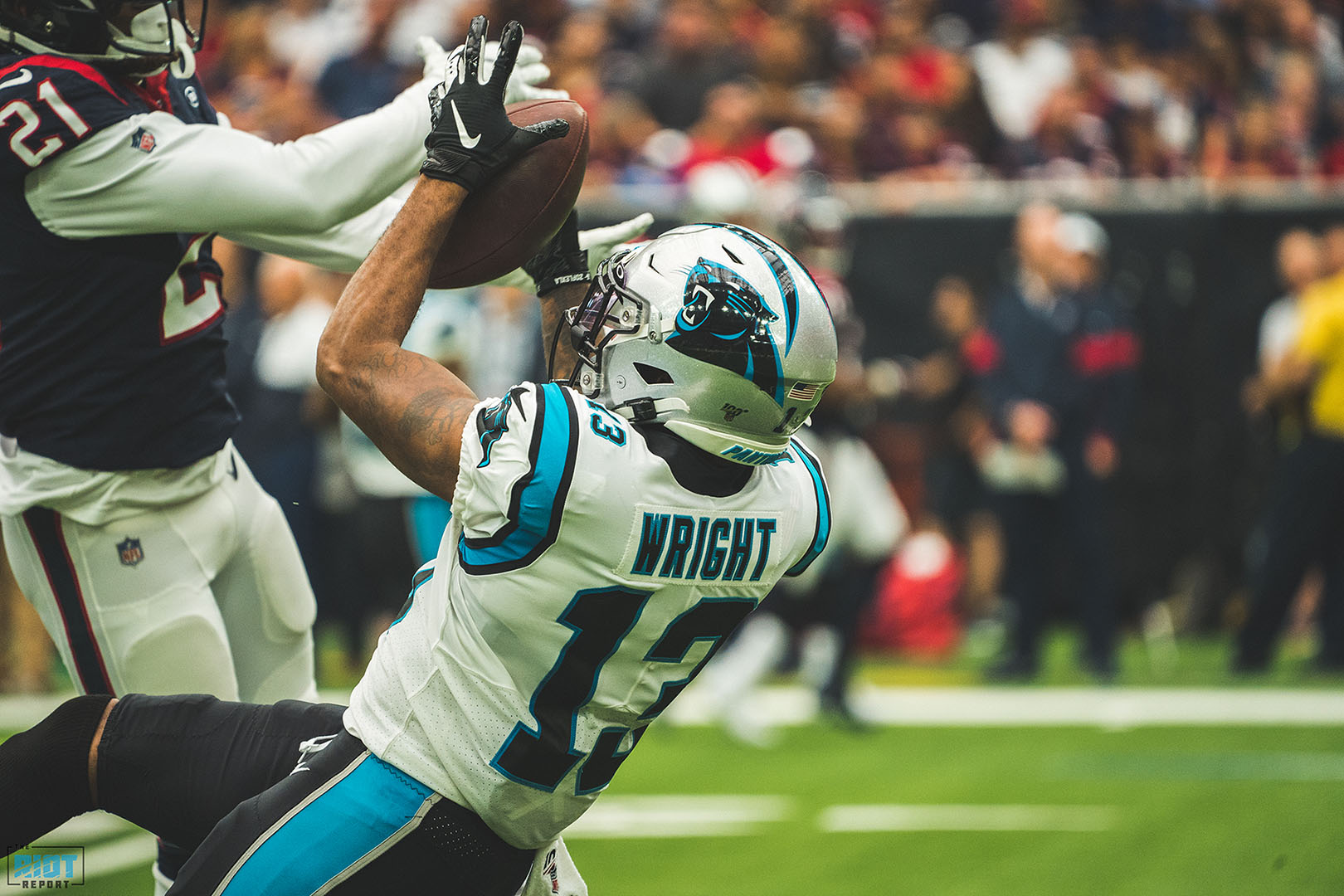 Jarius Wright led all Panthers receivers in both receptions and yards this past Sunday – and while five catches for 59 yards isn’t exactly the kind of stat line that gets you an All-Pro nomination, it was the kind of performance that Wright has produced repeatedly for the Panthers since signing before the 2018 season. None of the receptions he made were all that exceptional in themselves – though he did have a really nice grab in there – but he was able to come up with a number of drive-extending receptions without ever being an offensive focal point.

“Very consistent,” Ron Rivera said about Wright after the game Sunday. “He’s where he needs to be, and I think that’s very comforting, when you know there’s a guy where he’s supposed to be. Very similar to what Greg [Olsen] does for you as well. You’ve got to have those guys and you’ve got to have that guy that Kyle can get the ball to.”

This is nothing new for Wright, who has been this player throughout his career – but how does he do it?

When All Else Fails

People often talk about checkdowns in the context of route progressions, often referring to a route designed to give the quarterback a chance to get the ball out of his hands if he doesn’t think the deeper routes are getting open fast enough. When people think of checkdowns, they often think of receptions like this:

Wright doesn’t really have to do anything to get open here, and the play doesn’t really gain the Panthers much more than just throwing the ball away, but by getting the ball to Wright in the flat, Allen has at least given him a chance to make a defender miss and gain positive yardage. However, it is true that if this was all Wright contributed to an offense, it would be hard to view him as an important part of the passing game. This, after all, is essentially the role that Jonathan Stewart used to have when he was asked to run routes.

However, Wright was also able to come down with a couple of checkdown receptions on Sunday which really did add value to the Panthers’ passing game. First, this three yard receptions on 2nd-and-8:

Here, he doesn’t do anything massively special, but what he does is execute exactly what his role is on the play. He works quickly into the space in zone and gets his head around to receive the ball and secures it – despite the impending hit from behind. Had the ball gotten to him sooner, he would likely have been able to add at least a couple of yards after the catch and put the Panthers ahead of the chains. The final reception he had of this type was a nice gap to pick up 12 yards and the first down on 2nd-and-7. He’ll start in the slot and end up wide open along the sidelines to the top of the screen:

Again, there is nothing that Wright does from a route running point of view that is going to make a coaching cut-up, but he again gets his head around quickly to locate the ball, makes the catch and runs into the natural space created by the play. These two receptions are created as a result of the way the defense reacts to the other offensive players around Wright, with Wright acting to take advantage of not being the focal point of the defense. Wright doesn’t need to be an elite route runner or to jump out of the gym to be effective in this role, but the awareness to locate the soft spot in zone and to run the right route, the hands to consistently make the easy plays and the ability to add a few yards here and there are what have made him a valuable piece of this offense.

Wright has eight targets from Kyle Allen the last two weeks and has caught seven of them.

The following play also looks to be a great example of Wright being effective outside the structure of the offense – albeit in a very different way. On this crucial third down late in the game, Wright gets doubled off the line working out of the slot, and the aim of the play for the offense appears to be to use both Wright and Olsen to act as natural picks for Moore who is running a crossing route across the middle. However, because of getting trapped off the line, Moore has already passed across him before Wright gets to the depth for the pick. A result of this is that Wright’s defender gets lost in the mess and Wright does a great job of running into space and getting his head around to make the catch when Allen escapes from Watt:

Up Next: Added Value For The Offense