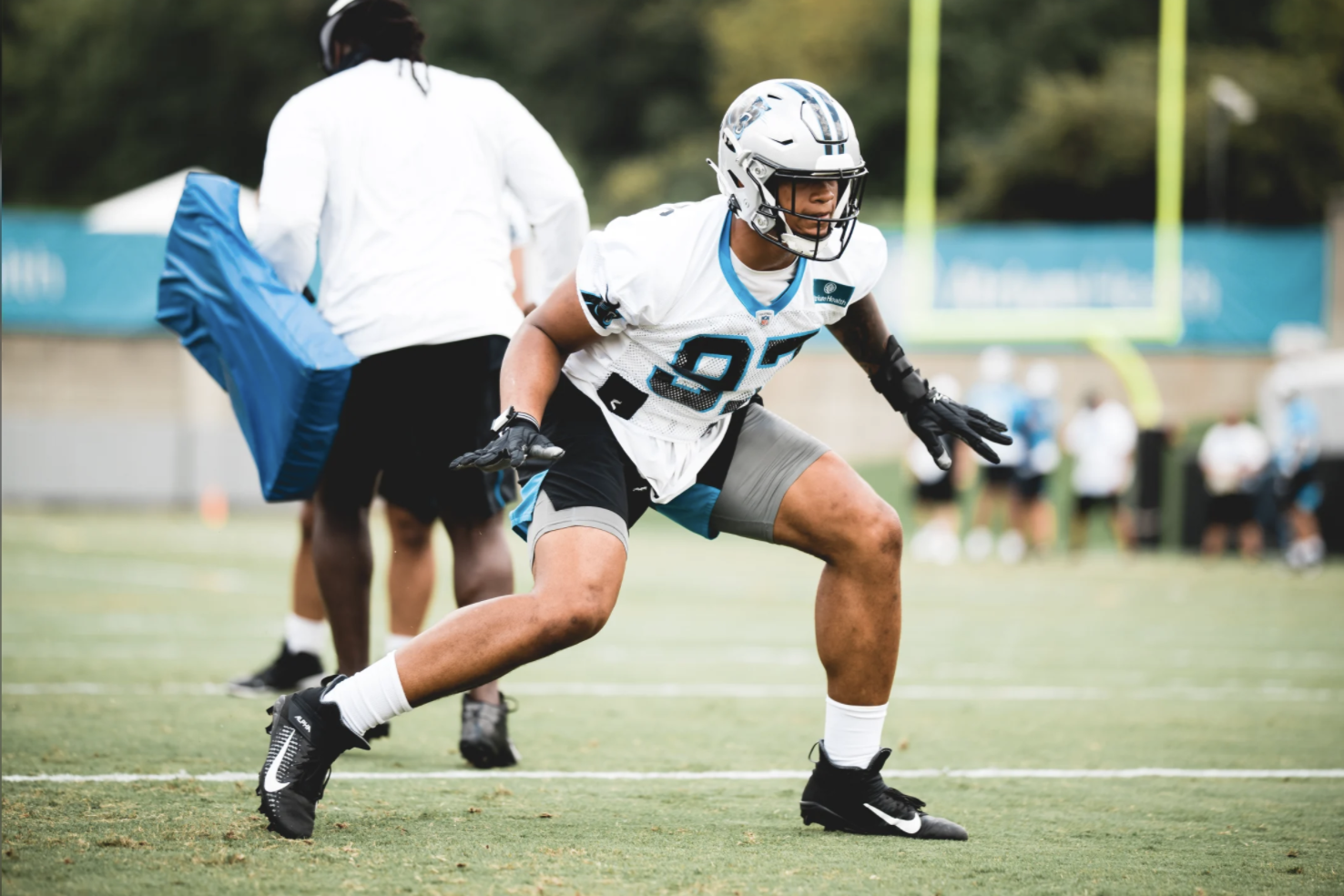 One word will define the troubling waters the Panthers will face for the 2020 season: Defense.

The departures of Luke Kuechly, James Bradberry, Gerald McCoy, and Dontari Poe and a host of others, as well as an inconsistent sophomoric season from corner Donte Jackson has left the unit with all kinds of questions and concerns as the season (hopefully) arrives upon us next month.

In particular, the linebacking corps and the secondary look to be youthful disasters, with the depth behind both not looking particularly inspiring as the team looks to rebuild that side of the ball. Up front, however, shows much more promise, with a group consisting of Kawann Short, Brian Burns, Stephen Weatherly, and rookies Derrick Brown and Yetur Gross-Matos.

“We want to have great strengths, we want to have things that people know that, ‘hey when you play Carolina, this is what you have to deal with,’ and we’re trying to build a defensive line that you have to be prepared for,” coach Matt Rhule said right after the draft. “With the guys that we have on the roster already and the edition of Yetur and Derrick (Brown), we’re just going to try to continue to make that strength a strength.”

Gross-Matos, a Penn State alumni, was drafted in the second round of this year’s draft in a continued attempt by the front office to improve the defensive line. He got national attention in his last two seasons, being selected to First Team All Big Ten in both years. In his last season in college, he put up nine sacks, 14.5 tackles for loss, 23 solo sacks, and 40 total tackles.

Marty Hurney and company clearly saw enough to pull the trigger and make an investment in the young edge rusher. Is he worth it? Is he another piece of the puzzle that involves a young, hungry pass rush that continues in the middle of its quest to solve the jigsaw puzzle?

Let’s take a look below at Gross-Matos’ strengths and weaknesses, seeing what he has to offer as well as what he can improve on.

First, let’s peak at a clip of Gross-Matos rushing up the interior. While at Penn State, he wasn’t used as an interior pass rusher to the extent of fellow Big Ten alumni and draft classmate A.J. Epenesa of Iowa, but he’s able to get a sack on this play.

Gross-Matos can’t get enough pressure inside here – but he makes up for lost ground by adjusting how he attacks the Memphis quarterback on the fly, grabbing him by the collar and bringing him to the turf.

via GIPHY
Though the left guard gets beat, he’s able to push Gross-Matos outside to make things more difficult for him, but even then, the pass rusher makes a fantastic adjustment so that all his work isn’t for nothing.

Against a great Ohio State team, Gross-Matos had a career day with two sacks on Heisman candidate Justin Fields. His dominance on the day wasn’t enough to stop his rival’s undefeated reign, but showed enough from him to attract attention as a prospect.

…He’s able to spike up the difficulty for Ohio State’s offense after this sack.

The left tackle initially contains YGM outside for a brief second, but gets beat with a counter chop from the edge rusher. Notice here that he’s able to get his outer hand on the left tackle, setting up a little room for him to execute the chop once he cuts inside. From there, Gross-Matos gives Fields the ultimate bear hug to the artificial grounds of The Horseshoe.

The best highlight of Gross-Matos’ junior year with the Nittany Lions comes from a win at Iowa, where he made mincemeat of the left tackle.

With a little shiftiness…

…The left tackle is but a corpse with Gross-Matos as the culprit. And true to his name, he executes a disgusting move on his way to the quarterback.

With a cut inside after a two-step drop, Gross-Matos executes a swipe move, latches onto the left tackle and pulverizes him with a rip move before crushing Iowa’s signal caller with a devastating blindside hit for the sack. YGM excels when it comes to the tricks in his toolbox: He’s not a one-trick pony and doesn’t rely on one move to beat linemen, which is something the Panthers must have appreciated when making the decision to scoop him up.

So we’ve seen the good, now what about the bad? Let’s take a look at some of Gross-Matos’ less impressive moments of 2019.

Going back to the Memphis game, Gross-Matos is lined up outside this time.

Based on this screenshot, it would seem as if YGM is bending towards the quarterback and a crushing sack is all but inevitable.

That, unfortunately, isn’t the case this time – he’s held up by a wall and can’t make his way through the dam of pass protection blocking his path.

The one major criticism I have of Gross-Matos is one that could hamper his development in the NFL and potentially stonewall his career.

He desperately needs to work on his combination of power and speed. Having a diverse arsenal of pass rushing goodies can get you by in the next level to a degree, but when it comes to Pro Bowl/All-Pro quality pass rushers, you need advanced speed/power. That’s something Gross-Matos lacks on a decent amount of his tape, as he’s been a little sluggish getting to the quarterback.

That’s one of the things he’s been working on with Brian Burns so far during training camp.

“Me and Brian are two guys who are long and athletic,” said Gross-Matos. “He’s been someone that’s been helping me out a lot – anytime he sees me going through a drill or taking notes, he gives me a little something to put in the back of my mind. Or coaching me up on a drill to make myself that much better – he’s helping me out a lot already.”

Even on some of his highlights, it takes a lot of effort for Gross-Matos to win his reps and get to the quarterback. It’s all great because he’s using impressive technique, it’s just that with an actual backbone of strength and momentum, he’d really become something special in the Panthers defense.

Related:   Five Point Plan For Panthers To Return To Winning Against Vikings

Another issue I have with Gross-Matos is a more minor one: He’s generally very good at wrapping up skill players, but his execution could still use refinement.

Right here on a third and short, Justin Fields should be stopped short of the sticks with a fourth-and-inches coming up, but somehow this isn’t what happens.

On the QB keeper, Fields cuts on a dime outside, and though YGM has his grip on him, he slips and lets Fields dive headfirst to move the chains and keep the drive alive for the Buckeyes. This isn’t a huge deal because, as aforementioned, Gross-Matos does a fine job of tackling, but blemishes like this need to be taken care of as he transitions to the next level.

Overall, Yetur Gross-Matos is a flawed, but fascinating prospect with plenty of potential. He has enough versatility as a pass rusher to get to the quarterback, and this will please Panthers fans for as long as he’s in Charlotte. But at the same time, he needs to develop his speed and become a more powerful pass rusher, otherwise the best he can be without improvement in those areas is an average player.

“I feel like I’m really concerned right now with taking each and everyday and trying to improve on stuff,” said the rookie. “I’m sure that coaches, teammates and myself are going to have me ready when it’s time to go.”

He’s still at the same weight he was at the Combine (266) and says he still has room on his frame to grow – let’s hope he does that sooner rather than later to continue to add more strength.

However, I do think YGM has enough promise to be an improvement to the defensive line – and if he develops into a stronger, quicker player, he has the foundation behind him to make an impact in the NFC South and beyond.