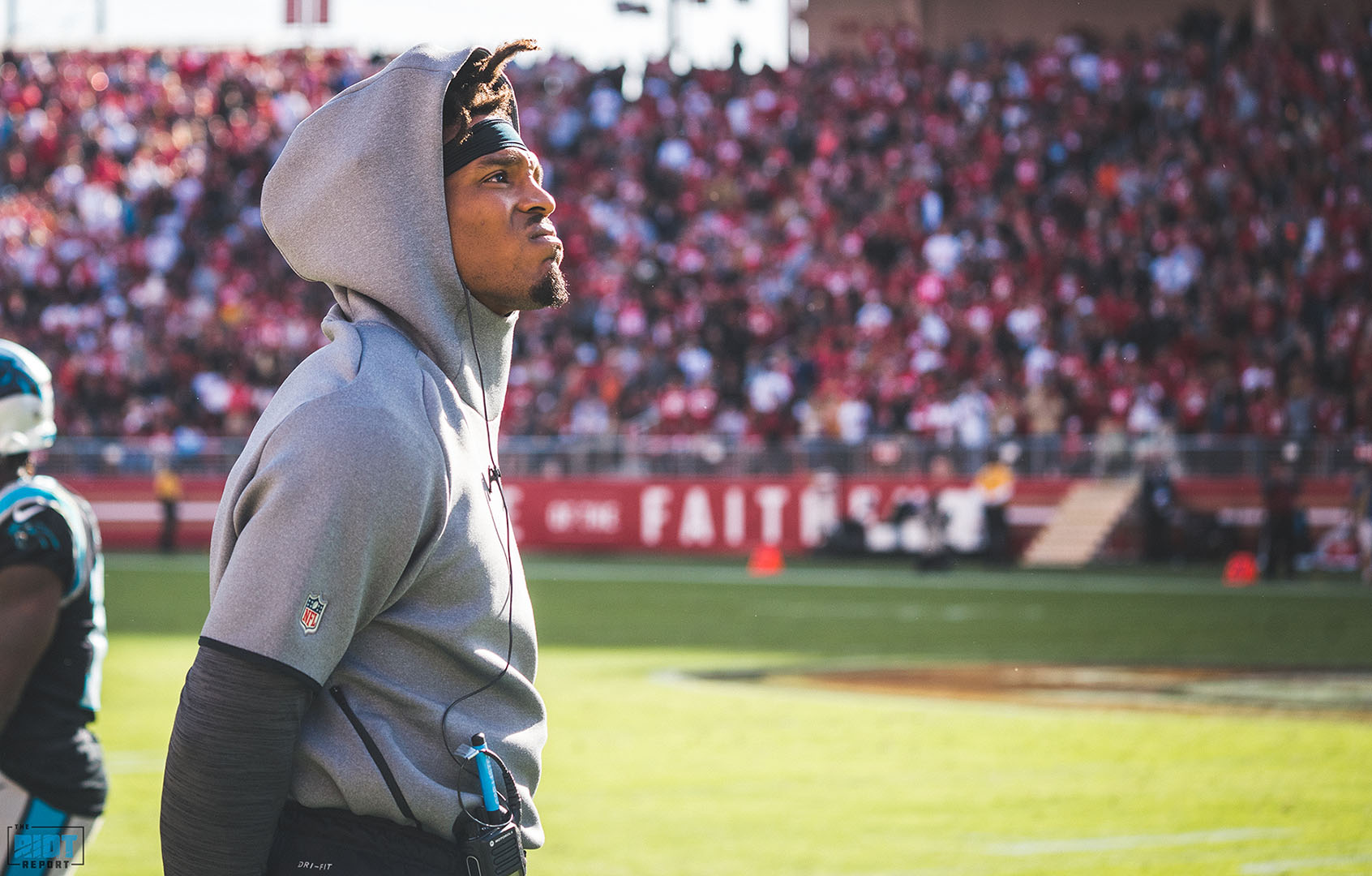 Ron Rivera is already sick of the Cam Newton questions.

That much has been obvious for weeks – when the Panthers coach is pressed about Newton at press conferences, be it during the week or after games while the Panthers’ quarterback has been missing from practice and has not spoken to the media outside of one appearance with the Roaring Riot, Rivera continues to reiterate some version of the same mantra.

Cam is rehabbing and the team isn’t going to force him back before he’s completely healthy. When he’s ready to go, he’ll be ready to go – Rivera even jumped in front of questions after the game in San Francisco, the first time Newton had traveled with the team since Week 2.

“You don’t need to ask after that to be honest with you.”

Rivera may not want to hear the questions – but they need to be asked, especially after a blowout loss in San Francisco revealed two truths:

“I think he tried a little bit more than he needed to,” said Rivera. “The thing that young players have to understand is there’s no 24-point play. You’ve got to make them one play at a time, and you’ve got to make them one score at a time and take what they’re giving you. If they’re giving you five-yard check downs, take the five-yard check down.”

Allen was more succinct when summing up his day. 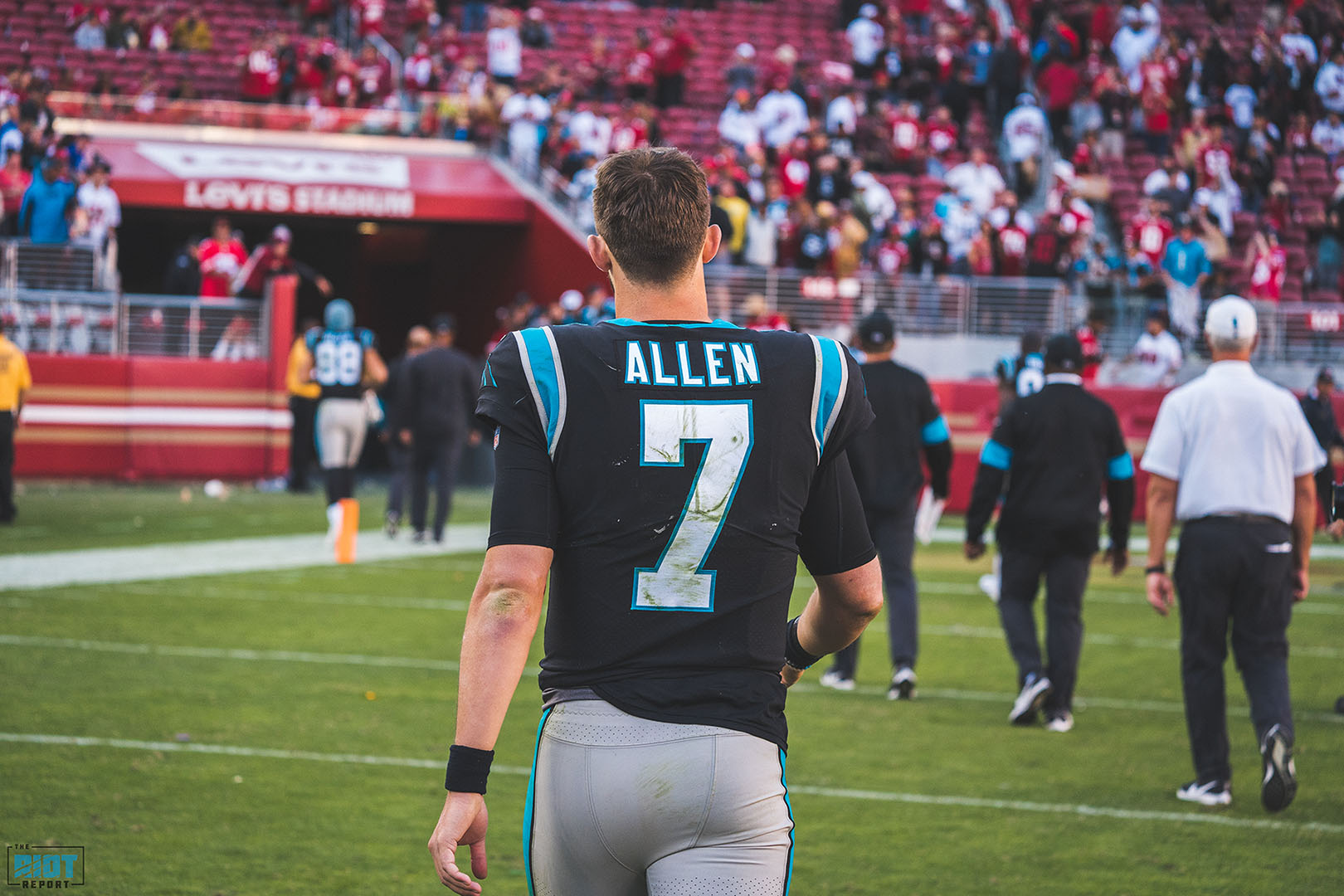 There wasn’t a whole lot that went the Panthers way on the field at Levi’s Stadium as the 49ers dismantled them from both an offensive and a defensive standpoint. But watching Cam Newton slowly jog the sidelines in a blue hoodie – something that the quarterback with the most rushing touchdowns in NFL history revealed that he was too injured to do during Weeks 1 and 2 as he tried to gut through a Lisfranc injury – and then go through warmups before the game, throwing passes to the left and right sidelines, taking three- and five-step drops, he certainly looked like a quarterback whose rehab is slowly morphing into football activities.

In the past week, Newton has both worked on the side during each day of Panthers practice with trainers and then traveled with the team, standing on the sidelines with an earpiece, interacting with receivers and Allen on the sidelines as he tried to provide whatever help he could while wearing a cut-off grey hoodie instead of a jersey; this has been the first week that he’s been deemed healthy enough for any of these activities.

While Newton may not be ready to return this week against the Titans – even if he’s able to participate in practice, he won’t have thrown a pass to his pass catchers in almost 50 days – the questions about the Panthers’ quarterback are going to intensify this week after Nick Bosa and the 49ers turned Kyle Allen into a pumpkin on Sunday.

But it’s not only questions about this season – the Panthers would like to see what a healthy Cam looks like before making huge, franchise-altering decisions this offseason; the team could release Newton after 2019 and clear almost $20m in cap space, but Newton’s camp will almost certainly be looking for a contract on par with someone who undoubtedly has the most famous face in Charlotte sports history.

That’s without mentioning Tuesday’s trade deadline – social media has had Cam being traded around the league for weeks, although those voices grew quieter with each Allen miscue on Sunday.

But as the Panthers packed their bags and prepared to board what was assumedly a long and quiet flight after a disappointing cross-country trip, Cam Newton was one of the final players to leave the Levi’s Stadium locker room and he answered only one question from reporters as he strode away – how are you feeling, Cam?