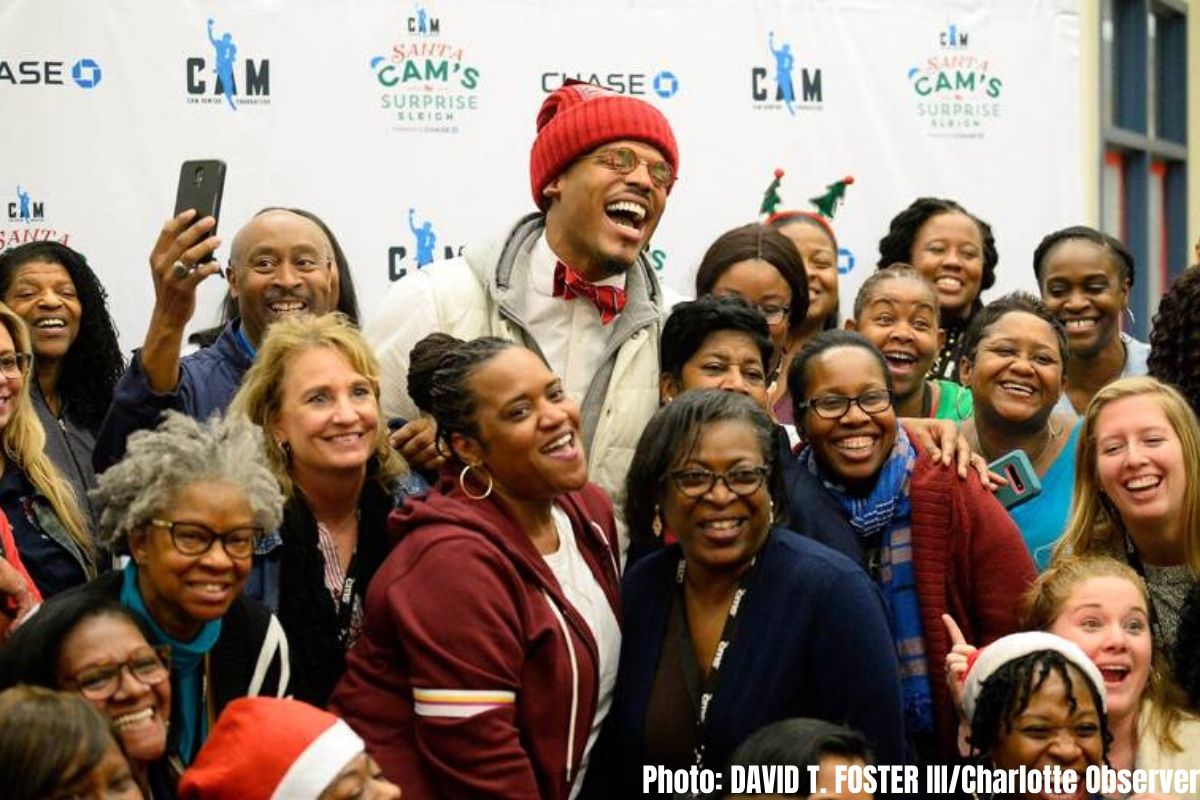 While most of the Charlotte sports world was focused on the new team in town as the city of Charlotte and owner of the Panthers welcomed the 30th franchise of Major League Soccer to the Queen City – ahem, Mint City – the face of the old team in town for the past decade quietly donated over $130,000 to schools and organizations around Charlotte – at least as quietly as he could muster.

Just because he was on a scooter after undergoing Lisfranc surgery last week in New York and his left foot was covered in a bright red sock didn’t keep the outsized quarterback and 2019 nominee for the Walter Payton Man of the Year Award from engaging in conversations, taking selfies and just exuding his overall Cam-ness as he visited five different spots around Charlotte as part of his annual Santa Cam’s Suprise Sleigh event, which has become a tradition and one of the trademark events for the Cam Newton Foundation, which is committed to enhancing the lives of youth by addressing their educational, physical and social needs.

This year’s donation was the largest in the history of the event.

The event comes on the heels of two recent events: last month’s Thanksgiving Jam, where he donated Thanksgiving dinner to 1,300 families, and just this past week hosted children from the Levine’s Children’s Hospital in a suite to watch the Panthers Week 15 matchup with the Seattle Seahawks.

While he hasn’t been able to take the field since Week 2, his off-the-field impact to the city of Charlotte continues to be an integral part of the Cam Newton Era – this year, Newton stopped at Phillip O. Berry High School with a $15,000 donation, gave $100 Visa Gift Cards to every employee at Westerly Hills Elementary and donated $25,000 each to both the Men’s Shelter and Second Harvest Food Bank.

Shout out to @CameronNewton for feeding 200+ people at the Men’s Shelter of Charlotte tonight. We ❤️ QB 1! @panthers pic.twitter.com/ddNl1kAFyo

In addition, Newton and his team of volunteers and partners Chase, Bojangle’s and Hendrick Automotive gifted $25k and Under Armour backpacks to the UrbanPromise After-School and Summer Camp – each stop on the tour of the city was selected for a reason. 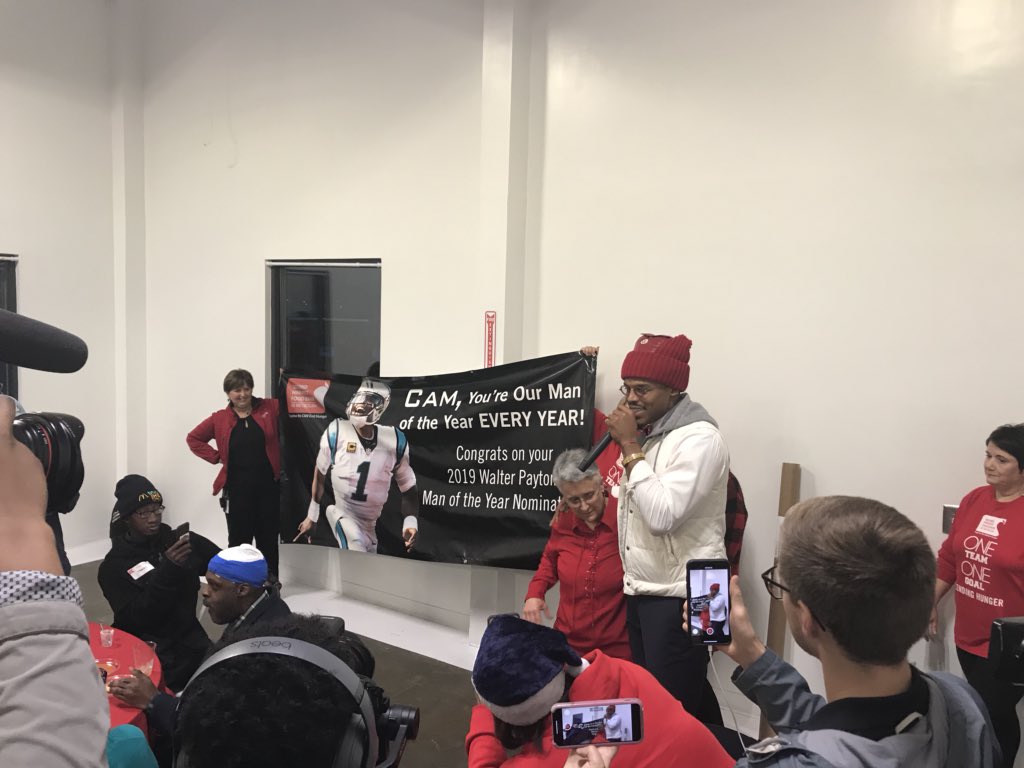 While the impact in the community was never in doubt, Newton’s future on the field certainly is.

Related:   Lean on CMC: How The Panthers Can Get An Upset Win in Tampa Bay

With one year remaining on his deal and the Panthers reportedly open to trading the former #1 overall pick – not to mention the Lisfranc surgery, Newton’s third procedure in four years, Newton’s intention is to stay in Carolina – but that may not be up to him.

“That’s the plan. That’s where I want to be. …You can’t get rid of me that easily,” he said, according to Jonathan Jones of CBS Sports.

“Listen let me tell you something,” Newton said later. “In order for me to leave, they got to get rid of me.”

One unquestionable part of the Panthers future is that a new coach will be on the sidelines, one chosen to lead the team into a new era by owner David Tepper, who said last month that in a perfect world, Newton is healthy and leads the team to a Super Bowl – but every time Tepper talks about the team’s franchise quarterback, it comes with that caveat.

If Newton is healthy – and that’s a big if.

No decision has been made about who will be taking the first snap of the 2020 season in a Panthers uniform, but while the quarterback can reiterate that he wants to stay in Carolina – the same notion he put forth when speaking at his Thanksgiving Jam, a new coach may not want to kick off his tenure with a quarterback who hasn’t looked the same since shoulder surgery in 2017 and is winless in his last eight starts. Or he may see a quarterback that has battled injuries for the past three seasons and is finally back to 100% healthy – only time will tell.

Related:   It Is What It Is: Panthers WR Pharoh Cooper & G John Miller

But Tuesday, that was talk for another day – even though folks asked him about whether or not he would return to Carolina, the focus was not on his future, but on the present.

“I don’t want to keep dwelling on the negativity of 2019 has been,” he said. “It’s been such a blessing for me to have these experiences like this, going to different venues to put people in the holiday cheer.

“That’s what it was curated for and that’s what we want to keep doing.”