Can LSU’s Kary Vincent Jr Be The Panthers’ Replacement For Tre Boston? 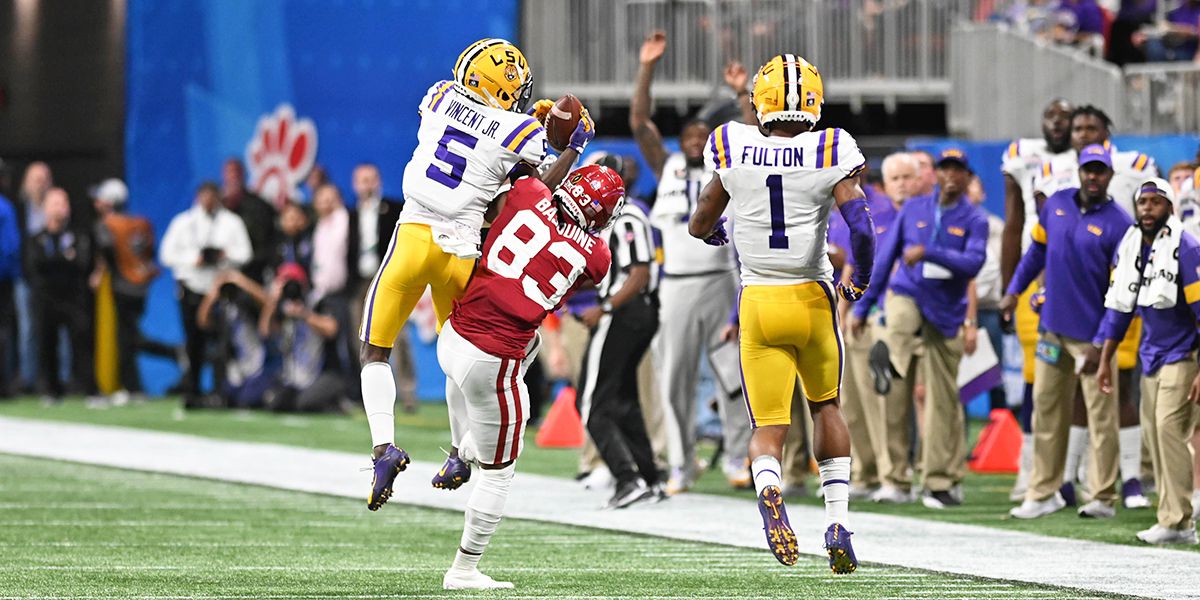 Among a number of largely expected player cuts last week, the Panthers also released Tre Boston in their attempts to create as much cap room as possible in preparation for free agency.

While the Panthers do have a couple of young options who could step into Boston’s role in Kenny Robinson and Sam Franklin (as well as Myles Hartsfield who appears to have carved out a role for himself at nickel), they could also look to add another option in the draft, with this option being made more credible by the fact that Juston Burris is entering the final year of his contract.

While there are a number of options who the Panthers could consider throughout the draft, one name who maybe isn’t getting the attention his potential deserves is LSU’s Kary Vincent Jr. So what does he do that offers so much potential and how would he fit in to what the Panthers are building on defense? 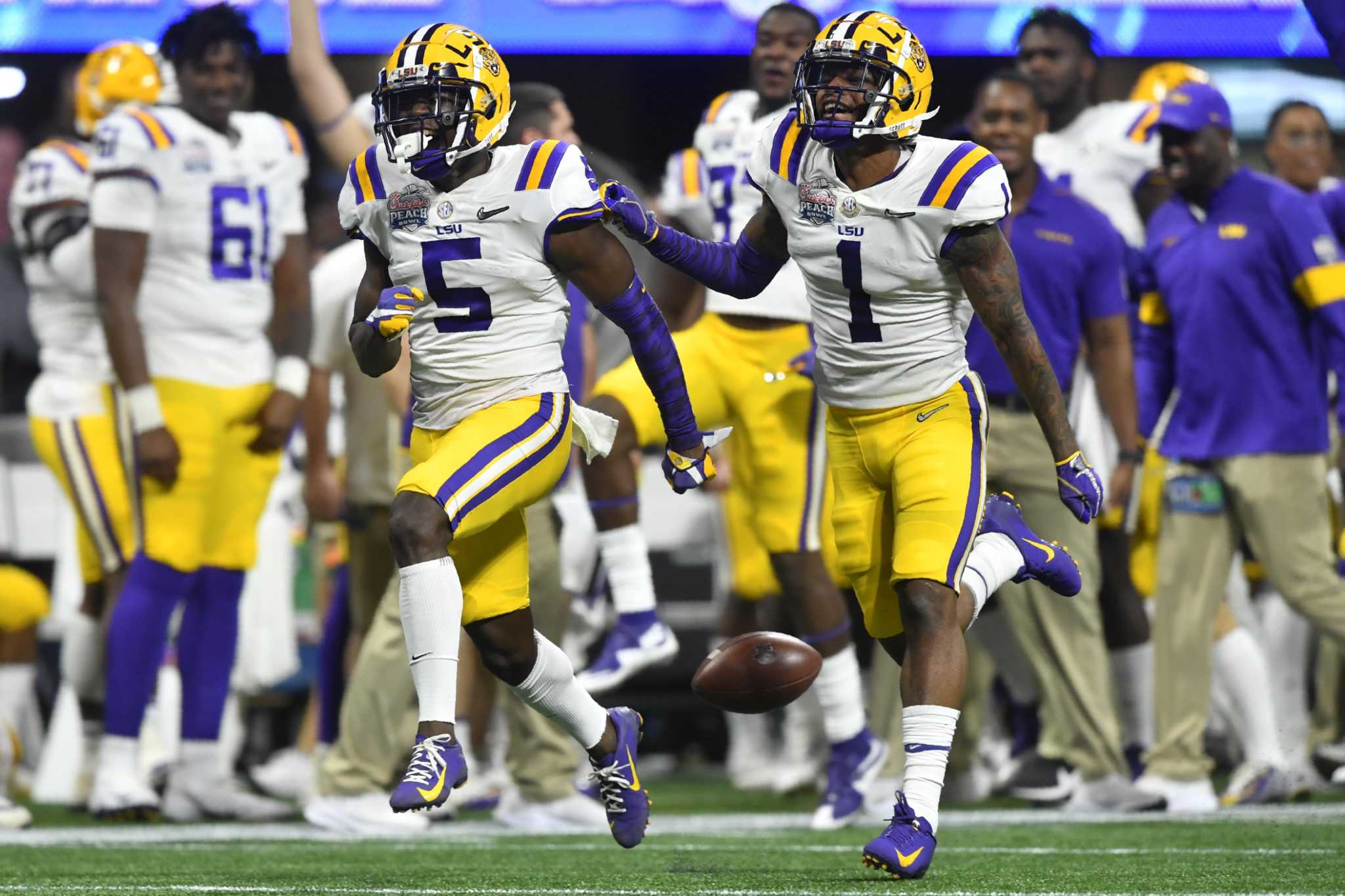 This also makes it easier for him to sit on underneath routes trusting that he has the speed to recover vertically:

Being fast is certainly a useful thing for defensive backs, but being a high quality coverage player is about more than being fast, and this is where Vincent Jr. has more work to do, especially in man coverage. 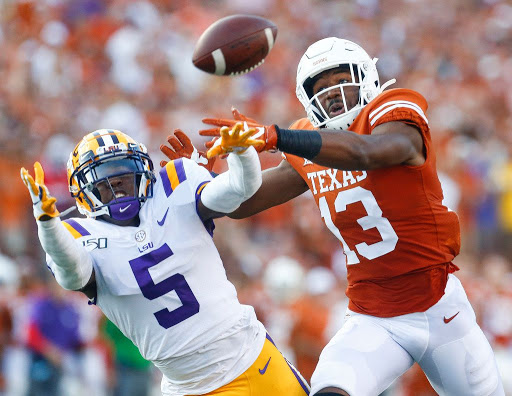 Assuming he does move full-time to safety in the NFL after playing a mixture of nickel and safety at LSU, he will need to show more consistency in how he transitions to run vertical in off coverage. He does show the ability to do this well so it doesn’t appear to be a physical limitation:

But there are times where his footwork is either just rather lazy:

Or he gets himself flat-footed at the head of routes and so allows the receiver to get a step as he has to transition off-balance:

This technical inconsistency in his footwork is something that also shows up in off coverage even when not asked to transition vertically. Again, he shows the ability to do this well so it’s not that he can’t do it:

And even when his footwork isn’t ideal his explosion to drive on the ball underneath is really impressive and if he can improve the consistency of his footwork then this should be a real plus trait for him:

In terms of where he needs to improve in his footwork, he needs to eliminate his tendency to drag his front leg as this loads weight onto his back leg which then makes it harder for him to accelerate back towards the ball:

And he needs to make sure that when he doesn’t drive on the ball he doesn’t cross over his legs as this then makes him vulnerable to double moves:

This will be especially relevant if he does move to playing more of a conventional safety role in the NFL, as in this case he will likely spend most of his time starting off the line of scrimmage and either dropping into zone or, when he does play man, doing so without being able to press and trail from the line of scrimmage. 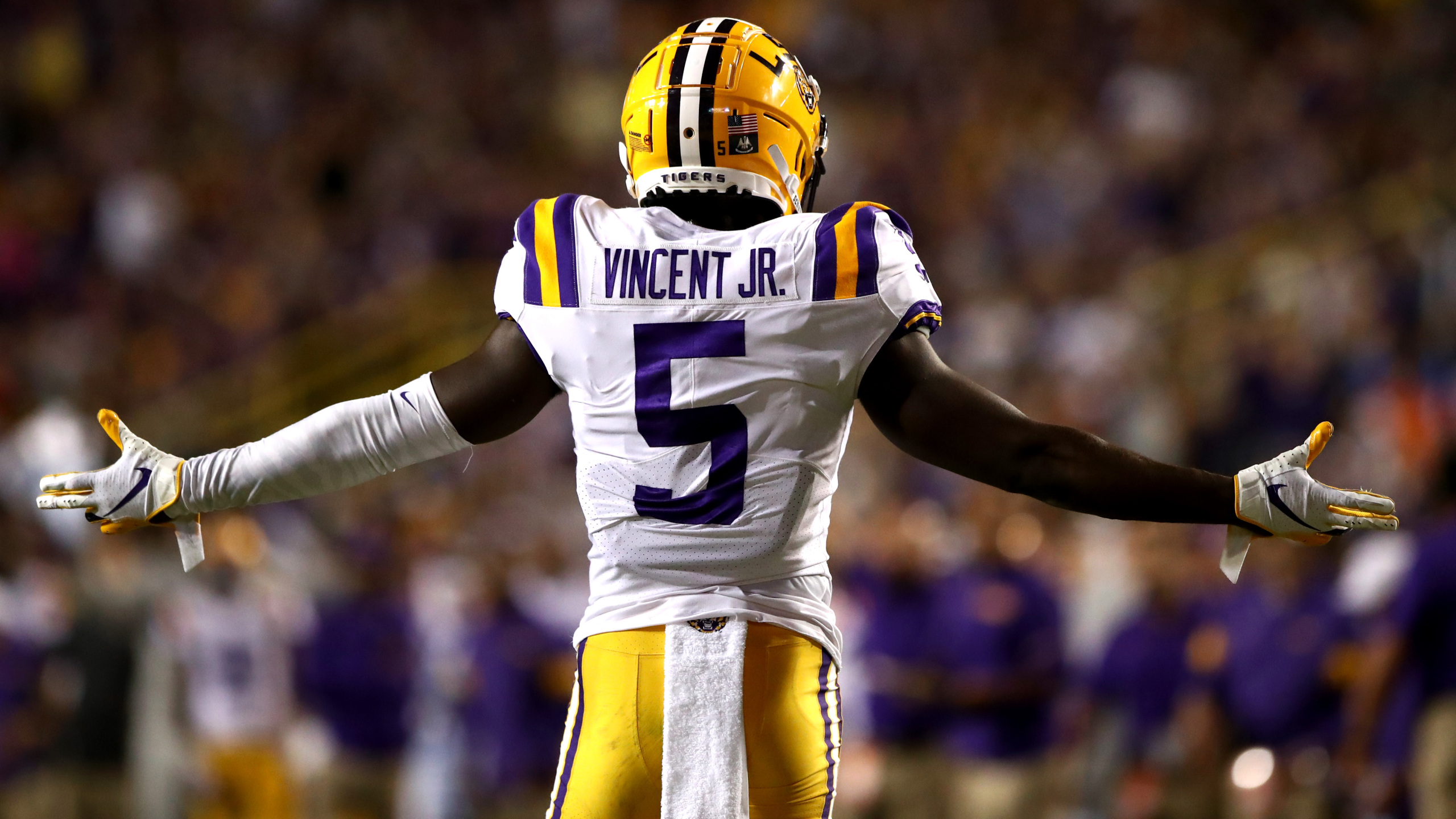 With that said, given that the Panthers do like their defensive backs to be versatile and able to swap roles based on personnel and shifts, Vincent Jr. could still end up playing some trail coverage from the slot and while this isn’t where he is going to make his money this is still something he shows the potential to be able to do at a high level.

However, if he is going to make the most of his ability in this regard he will need to work at his footwork at the line, as he can tend to get a little flat-footed allow receivers to create early separation:

Beyond that though, he uses his hands well through routes and looks to make good use of the boundary to compress space and make it easier for him to compete:

And then is able to make use of his natural speed and movement skills to follow receivers vertically and through breaks:

As an underneath coverage player then, Vincent Jr. has the talent to be successful but if he is asked to play in the slot a lot even as a safety, he does need to work on the discipline of his footwork as this does let him down at times. 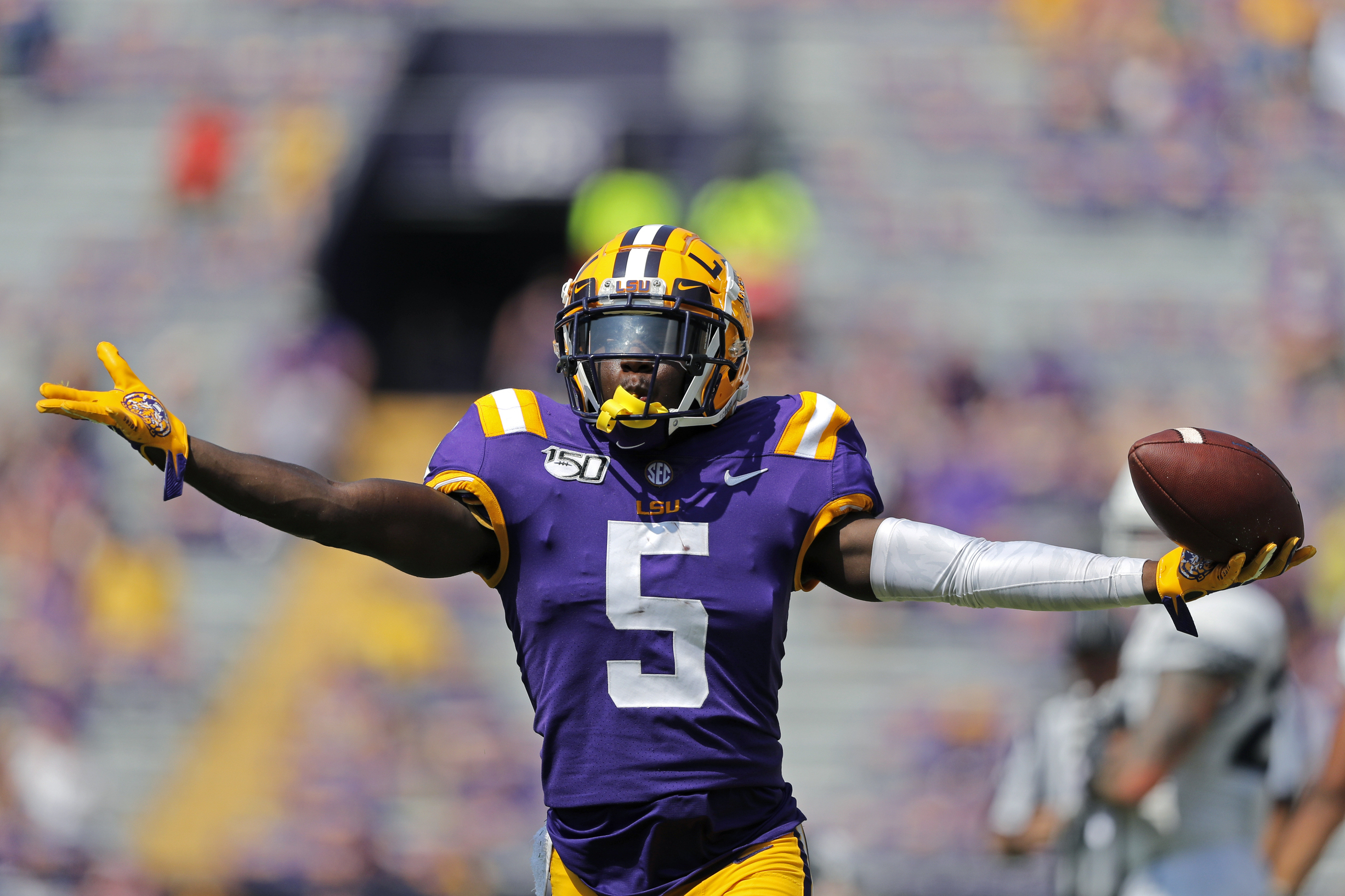 While Vincent Jr. has the talent to play from the slot with some technical refinement, his real appeal as a safety prospect is in his ability to impact the game in deep zone with his range and ball skills. Even in trail man coverage he displays a really good ability to impact the play at the catch point by contesting and routinely forcing incompletions:

Importantly, not only does he have excellent ball skills:

But he also shows an understanding of how to use them to impact the game, doing an excellent job of undercutting outside routes to allow him to make a play at the catch point:

If he is to excel in deep zone coverage especially, this ability to pre-empt where the ball is going to go will be crucial, as however fast you are there is a limit to how much impact you can make if you are only breaking on the ball after it leaves the quarterback’s hand. 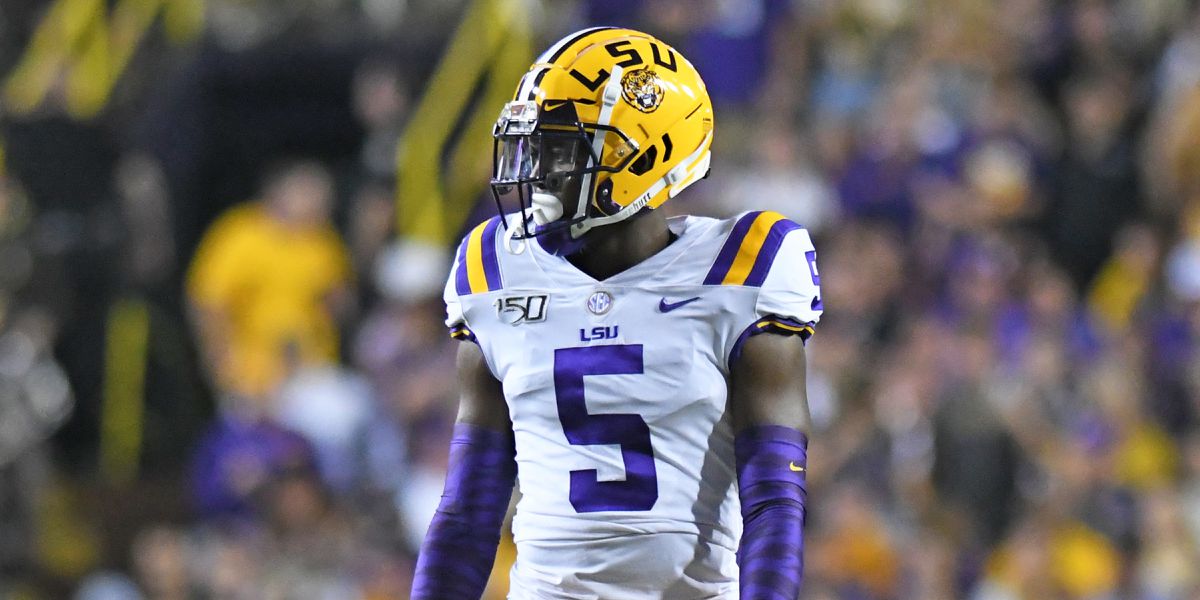 This is really the biggest question mark for Vincent Jr. in coverage, as he just didn’t play enough centerfield safety for there to be a big enough sample-size that this is definitely something he can do to a high level. There are, however, some really encouraging flashes such as here where he not only recognizes the receiver coming across the field but also that he has help underneath the route and drops off the route to give him space to react if the ball is deflected, ultimately allowing him to make the INT:

And plays like the following, where he shows an awareness of routes on both sides of the field and then has the range, anticipation and ball skills to make a play on the ball:

If he can show this level of awareness, range and anticipation on a consistent basis as a deep coverage player then he can be as valuable as any safety in this class, and a core building block for an NFL defense.

That isn’t an insignificant ‘if’, but the payoff could be huge. 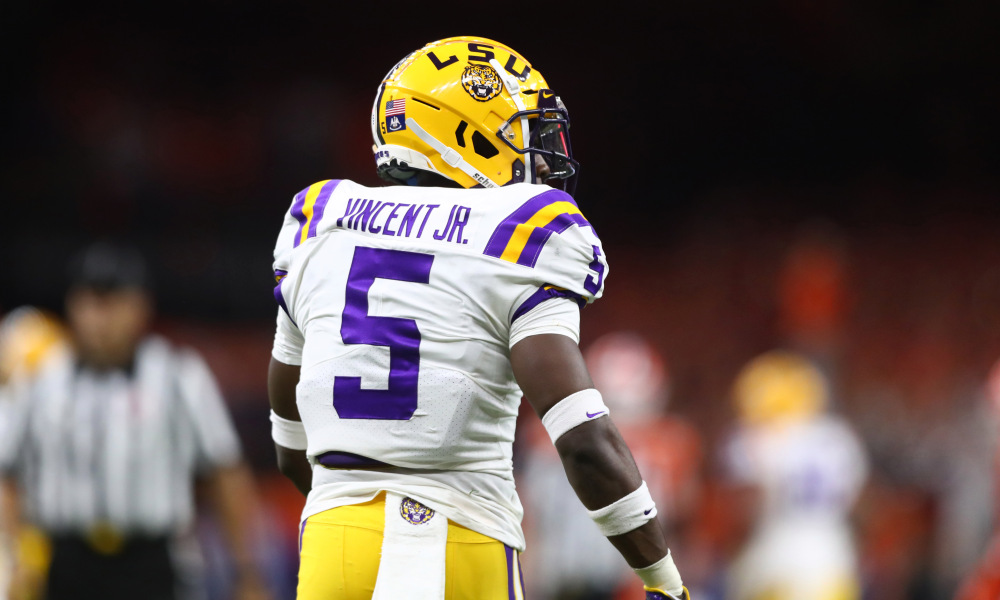 Of course, playing safety isn’t just about coverage, and even if Vincent Jr. does emerge into the centerfield safety he flashes the potential to be, he will still likely to asked to spent some in or at least around the box as part of the Panthers’ hybrid system, and this will mean that he needs to be able to hold his own as a run defender.

On tape, he certainly shows a willingness to come up and make a tackle:

And he shows an awareness to shoot outside gaps to force runs inside where he has help, even if it would have been nice to see him then compact the gap laterally:

However, he can at times get a little too tight to the ball and flatten his feet, allowing ballcarriers to gain outside leverage with a slight reaccleration:

And while it’s hard here to know exactly how much he is to blame as LSU do a lot wrong in terms of filling gaps, it certainly would have been nice to see him recognize that the backside pursuit wasn’t going to get there and take a more direct line to the ball rather than being quite passive and looking to redirect it back inside:

He also just needs to work on his tackling technique, as while he does a consistently pretty good job of wrapping with his arms he needs to be more consistent in how he sets his feet as while effective at times he isn’t going to get away with not engaging his feet as a tackler on a consistent basis at the next level:

While it’s unlikely that he will spend much time working off blocks in the box, if he does spent some time in the slot especially then this will be something he needs to do, and while he does the basics reasonably well in terms of squaring his feet and locating his hands, he needs to do a more consistent job of bending his knees and extending arms as he’s not the longest DB and so needs to make sure he doesn’t get blocked out of plays but bigger receivers: 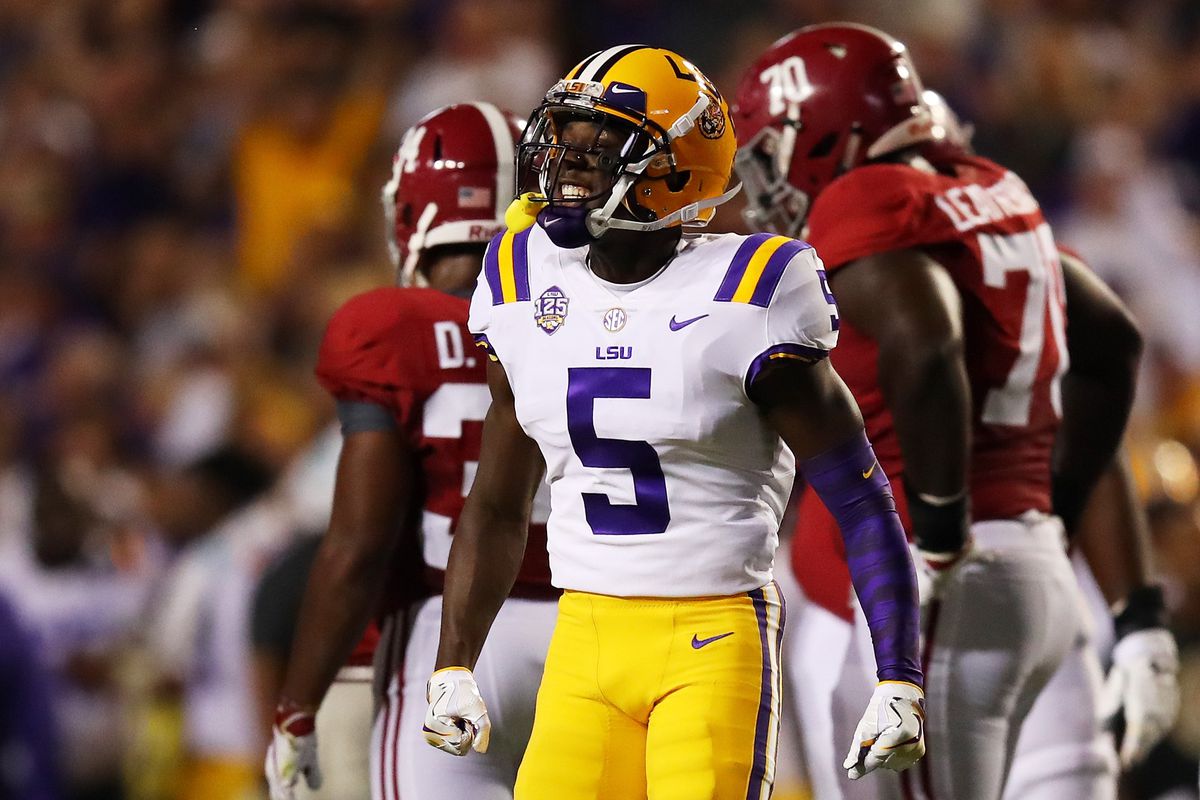 Kary Vincent Jr. is something of a risk, not just because there are technical areas of his game that need refinement, but also because he is going to need to transition from mostly playing nickel in college to more of a genuine safety role in the NFL if he is to maximize his value.

However, as a player who is currently projected to be drafted early on day three, his enormous upside as a potential centerfield safety could be too good to pass up for a Panthers’ team that needs to add talent in the secondary and he’s certainly a name to keep an eye on as we get closer to the draft.