Film Room: How Does Denzel Perryman Fit In Carolina? 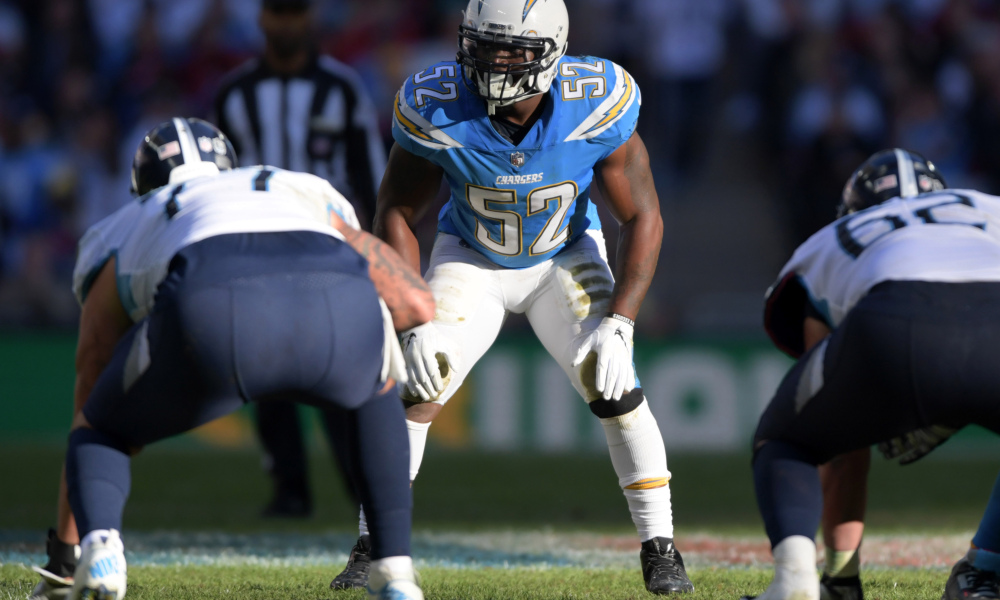 While his signing might have been overshadowed by the addition of Haason Reddick just a few hours later, Denzel Perryman’s arrival likely spells the end of Tahir Whitehead’s time in Carolina and also creates some interesting possibilities for how the Panthers can look to build defensively. With Jermaine Carter and Shaq Thompson, the starting pair from the second half of last season, back in Carolina for 2021, Perryman’s addition creates some interesting possibilities both in the short- and long-term.

To find out more, we’ve taken a look at the tape. 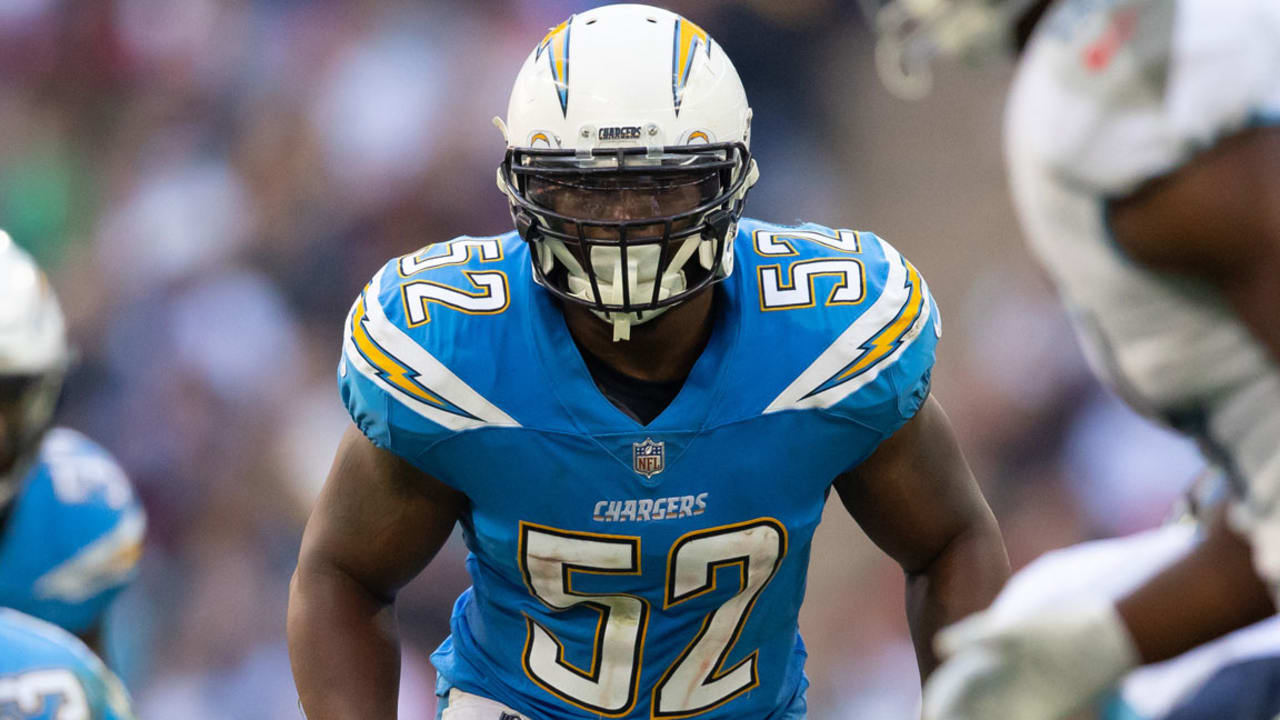 At 5’11 and 240lbs, Perryman certainly fits the physical profile of the inside thumper that the Panthers’ defense under Phil Snow seems to value. On tape, he certainly shows the ability to lower his shoulder and make a hit that ball-carriers aren’t going to forget in a hurry (please note, Perryman wears #52):

Though in space he could do a better job of setting his feet going into the tackle, as he sometimes plays a little off-balance and he is guilty of the occasional missed tackle:

However, he was able to dramatically cut down on his missed tackle numbers in 2020 so if he is able to carry this forward into 2021 and beyond then that would certainly be a positive. 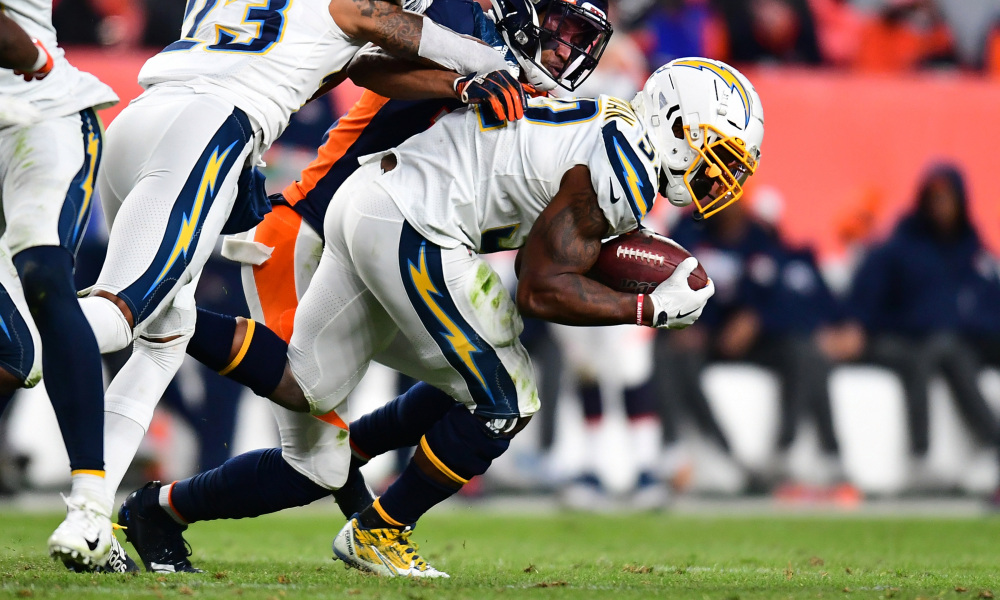 Of course, run defense is about a lot more than simply tackling, and here Perryman showed some nice things as well as some areas for improvement. Where he can be really effective is when asked to shoot gaps, and in general the most impressive parts of his game are when he is asked to work downhill:

He also generally does a nice job of adjusting to pulling blockers and shifts laterally well to work into his gap and make the tackle:

And he also shows the awareness of when to leave his gap, such as here he recognizes the defensive lineman getting worked out of his gap and shifts outside to adjust for this and make the tackle:

However, where he can struggle is when asked to pursue from the back side of the play, as he can be a little slow to react and lacks the top-tier make-up speed to consistently pursue over the block to get back in his gap:

He was sometimes about to make up for this by shooting behind the block and making the tackle from the back side:

However, this can be a somewhat high-risk approach as if he isn’t able to make the tackle then this can lead to an open crease for a big gain. Perryman is never going to be the fastest linebacker in the NFL, though he isn’t actively slow either, but could do a better job of making sure he doesn’t let blockers cross his face as easily as he did at times in 2020.

The other high-risk approach that Perryman takes in the run game is the way he takes on blocks, as he doesn’t tend to be very active with his hands and instead looks to use his power to stunt blockers. When this works, it looks pretty spectacular:

However, when he isn’t able to hit blocks at speed, he needs to use his hands more actively to keep blockers off his frame and to allow him to make better use of his natural leverage as right now he can end up going backwards more often than is ideal:

While this is unlikely to be something he suddenly excels at aged 28, if he can prevent his hands from dropping to his sides quite so much then this will help him to at least keep his frame clean, even if he isn’t actively locating his hands with nice arm extension.

As a run defender then, Perryman can be very effective indeed when working downhill and if the Panthers are going to consistently going to ask him to attack gaps then he can be a high-quality run defender. However, he can struggle to be as effective when offenses are able to force him to hesitate early in plays and further technical refinement as a tackler and when working off blocks would help to remove some of the negative plays in his run defense.

Of course, playing linebacker in the modern NFL is about more than just defending the run. So how does Perryman get on in when teams look to throw the ball? 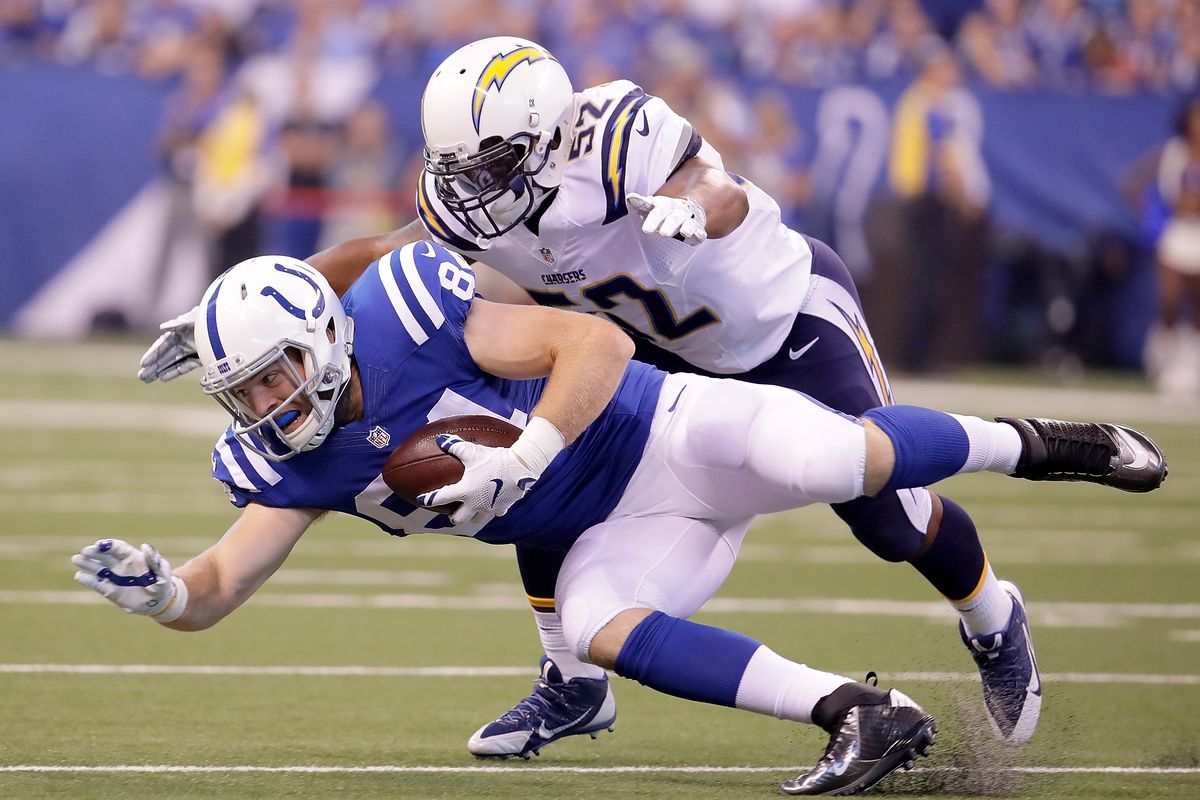 The Panthers’ defense has played a lot of zone coverage under Phil Snow, and while they would likely to be able to be a little more flexible in that regard, zone coverage is still going to be the core of what they do. While Denzel Perryman isn’t going to be confused for a safety, he shows a reasonable range and fluidity in zone:

And did a consistently nice job of picking up receivers arriving in his zone:

This is a really important point, as while Perryman is unlikely to produce a ton of interceptions or lock receivers down in man, he is consistently where he needs to be and doesn’t allow easy completions into his zone. This might not allow him to elevate the defense in terms of coverage, but it means that he is not a weak point in the coverage, which for a 240lbs linebacker is a real plus. 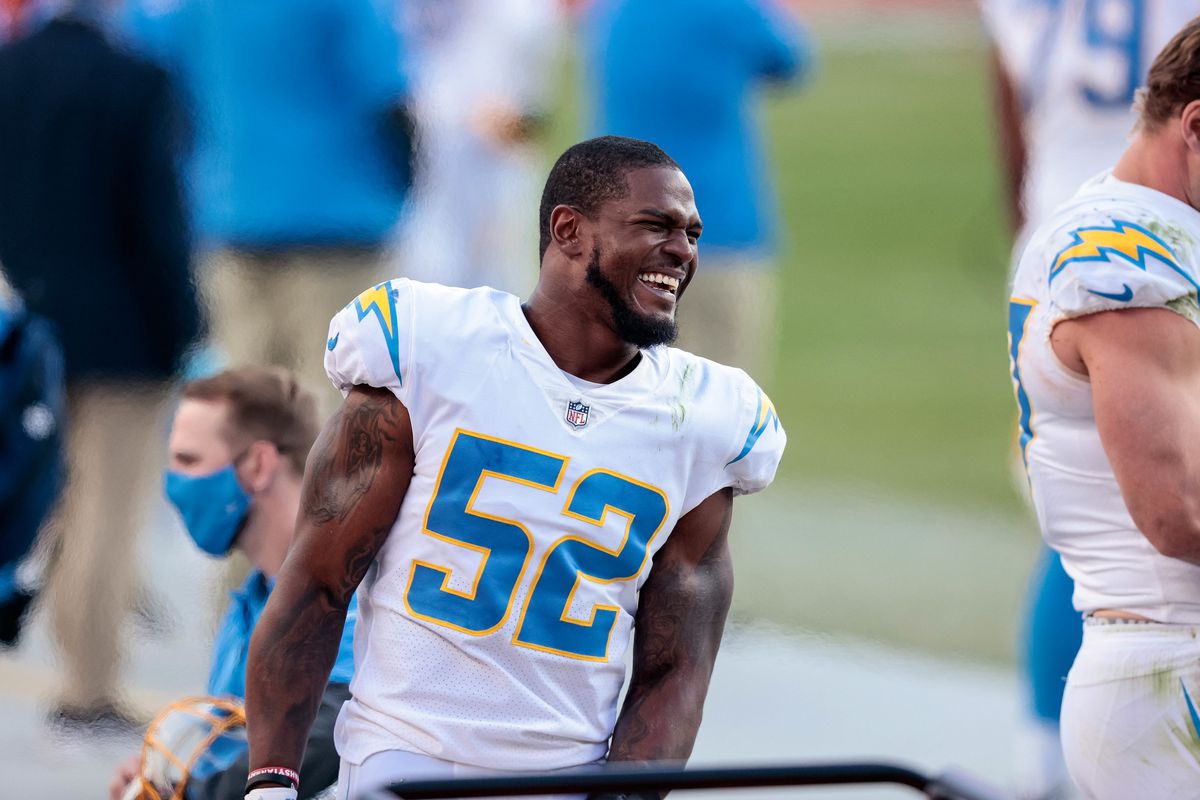 With that said, he does show some limitations in coverage that are unlikely to see significant improvement at this point in his career. First of all, he is somewhat limited by his balance and movement skills at times, as while he is able to drop reasonably effectively in coverage he can struggle to drive on routes at times:

And as mentioned earlier, he is more reactive than anticipatory in coverage:

And this tendency to focus in on receivers rather than reading where the ball is going can lead to a few misjudgements:

In man coverage, his usage was fairly limited, but he did show the speed to pursue to the flat to take away easy receptions:

However, while his speed is good, he does still have the same issues in terms of balance and movement skills that he showed in zone coverage and better route running backs could cause him real issues on routes that break either upwards or back inside such as Wheel or Texas routes. 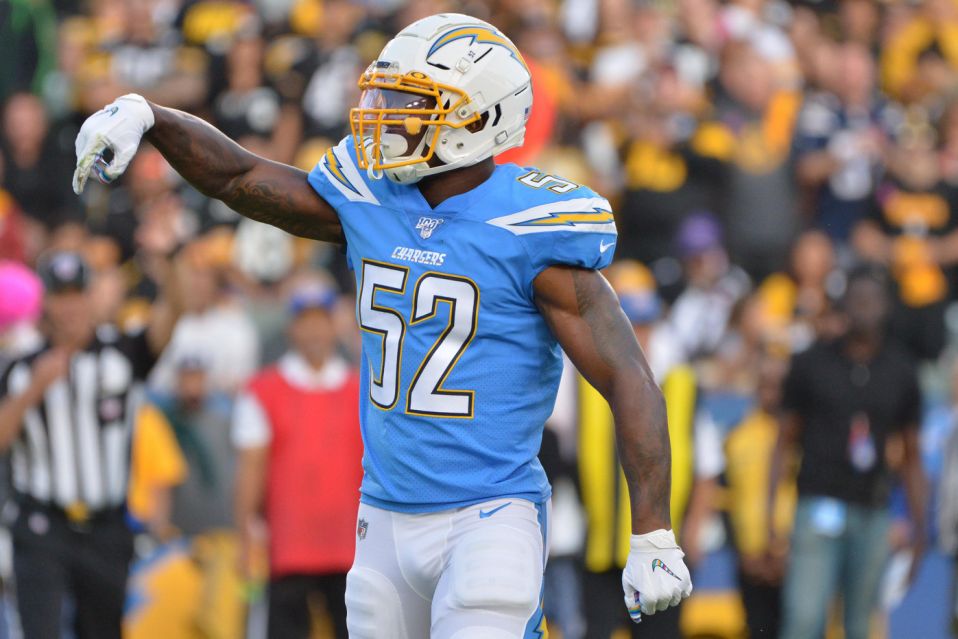 Overall, in coverage Perryman has limitations that he is unlikely to be able to overcome, but performs at a high level inside those limitations and in a defense where he is largely asked to drop into zone he should be consistently effective even if he is not a regular source of interceptions and anticipatory pass break-ups.

While the Panthers didn’t blitz a huge amount in 2020, if they do choose to do this more in 2021 then Perryman has shown that he can be effective in this regard:

For Perryman, success in Carolina is going to be as much about reasonable expectations as his play on the field. If the expectation is that he can be the replacement for Luke Kuechly or Thomas Davis then no, he probably is not going to live up to those expectations. However, he can be a solid if unspectacular coverage player who, with a little further development in terms of using his hands to work off blocks and setting his feet as a tackler, can be a plus run defender. 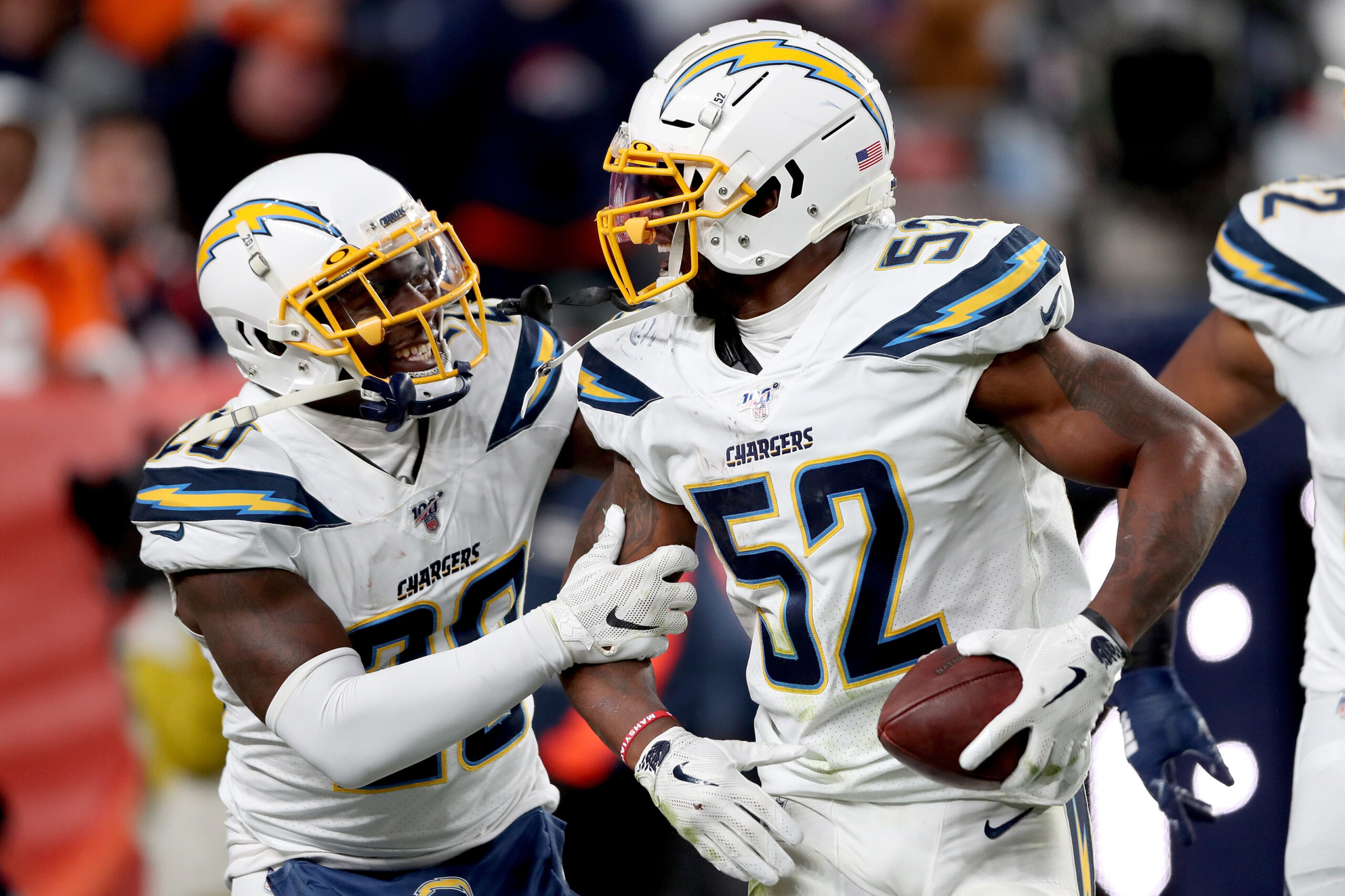 DENVER, COLORADO – DECEMBER 01: Denzel Perryman #52 of the Los Angeles Chargers celebrates with Desmond King II after making an interception against the Denver Broncos in the fourth quarter at Empower Field at Mile High on December 01, 2019 in Denver, Colorado. (Photo by Matthew Stockman/Getty Images)

In terms of where he fits in Carolina, he gives them a third viable linebacker who can compete with Jermaine Carter for the #2 LB role while also offering insurance should Carter depart in free agency in 2022. How significant his role will be will likely depend both on whether he is able to win that #2 LB spot, but also on how much time Jeremy Chinn spends at S compared to LB.

While Matt Rhule has made it clear that he ideally doesn’t want to have to substitute defensive personnel a huge amount, while they continue to work out where Jeremy Chinn’s best role might be it seems likely that there might be some alternation between two and three LB formations. 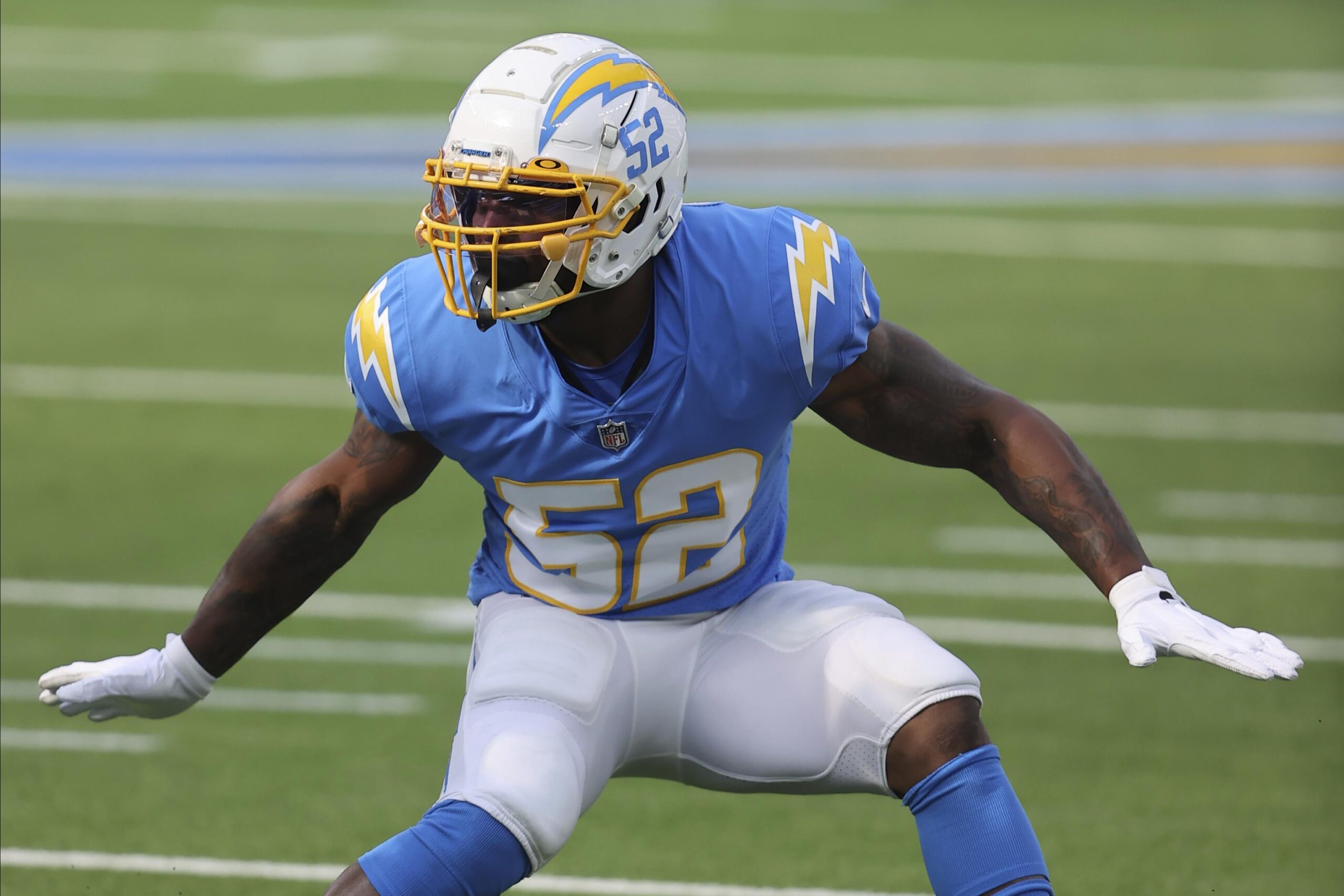 This might not be the move that puts the Panthers over the top, but this is a smart, low-risk move that will hopefully become a feature of the Scott Fitterer/Matt Rhule regime in Carolina.