Film Room: How Pat Elflein Can Make The Panthers Better 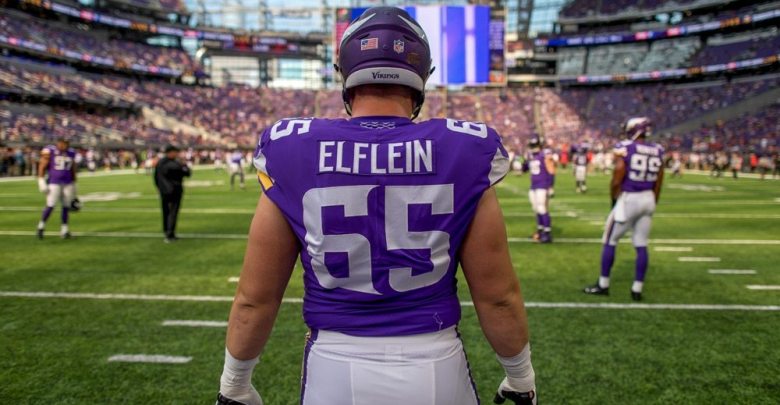 The Carolina Panthers weren’t expected to be big players early in free agency, and yet within an hour of the legal tampering period beginning, it was reported that the Panthers had agreed to a three year deal with interior offensive lineman Pat Elflein.

What is not surprising is that the Panthers’ first signing of free agency was an interior offensive lineman, as this was most glaring need for the Panthers. However, free agency isn’t just about signing players at the right positions – but also signing the right players as well.

Elflein certainly fits a lot some of the other biographical markers that the Panthers are looking for – he is still relatively young, turning 27 later this offseason, and has positional flexibility with the ability to play both center and guard.

To get an idea of what he can actually contribute when he’s on the field, however, we have to look at the tape. 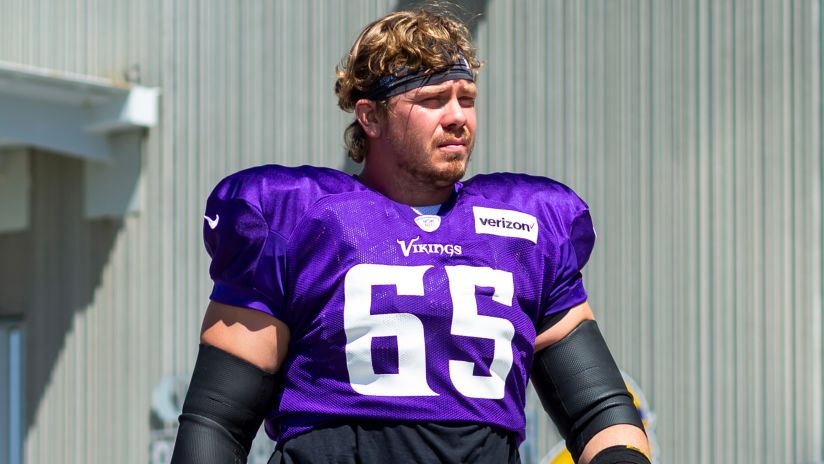 One thing that really stands out when watching Elflein from his time with the Jets last season is that they asked him to reach block – a lot.

This is somewhat understandable as this is something that he does well, showing the combination of hand placement and footwork to work around defenders to seal them on the back side of plays (Elflein plays left guard throughout and wears #67):

As a smaller guard, he’s listed as 6-3 and 303lbs; it shouldn’t be a huge surprise that he has the agility required to make these blocks, but the hand location is important as well, as this allows him to anchor his movement relative to the defender while also making it hard for the defender to work off the block as they move laterally.

This hand placement is especially useful when he isn’t able to get outside the blocker:

No blocker is going to be able to get a seal on reach blocks all the time, and for Elflein this was made no easier by the fact that the Jets asked him to block this way so often that it was fairly easy to predict – the hand usage to make these blocks effective even when this isn’t possible is important and is something we’ve looked at before in the context of the Panthers’ running game.

His agility also shows up in other ways, as he does a good job of working to the second level:

And importantly, when working off of double teams, he shows not just the movement skills to get to the defender but also the awareness of what his responsibility is on the play, making sure he sets his feet to close of the play before looking to engage the defender:

And while he wasn’t asked to pull to inside gaps much, he did a good job when asked to pull across the seal the edge defender on the front side of the play:

Given that the Panthers’ run game is expected to be more focused on working blockers to the second level and creating gaps with technique and lateral movement than driving blockers off the line of scrimmage, Elflein certainly has many of the traits to be a positive addition to their run game.

However, there are also some aspects of the run game where Elflein needs to improve. 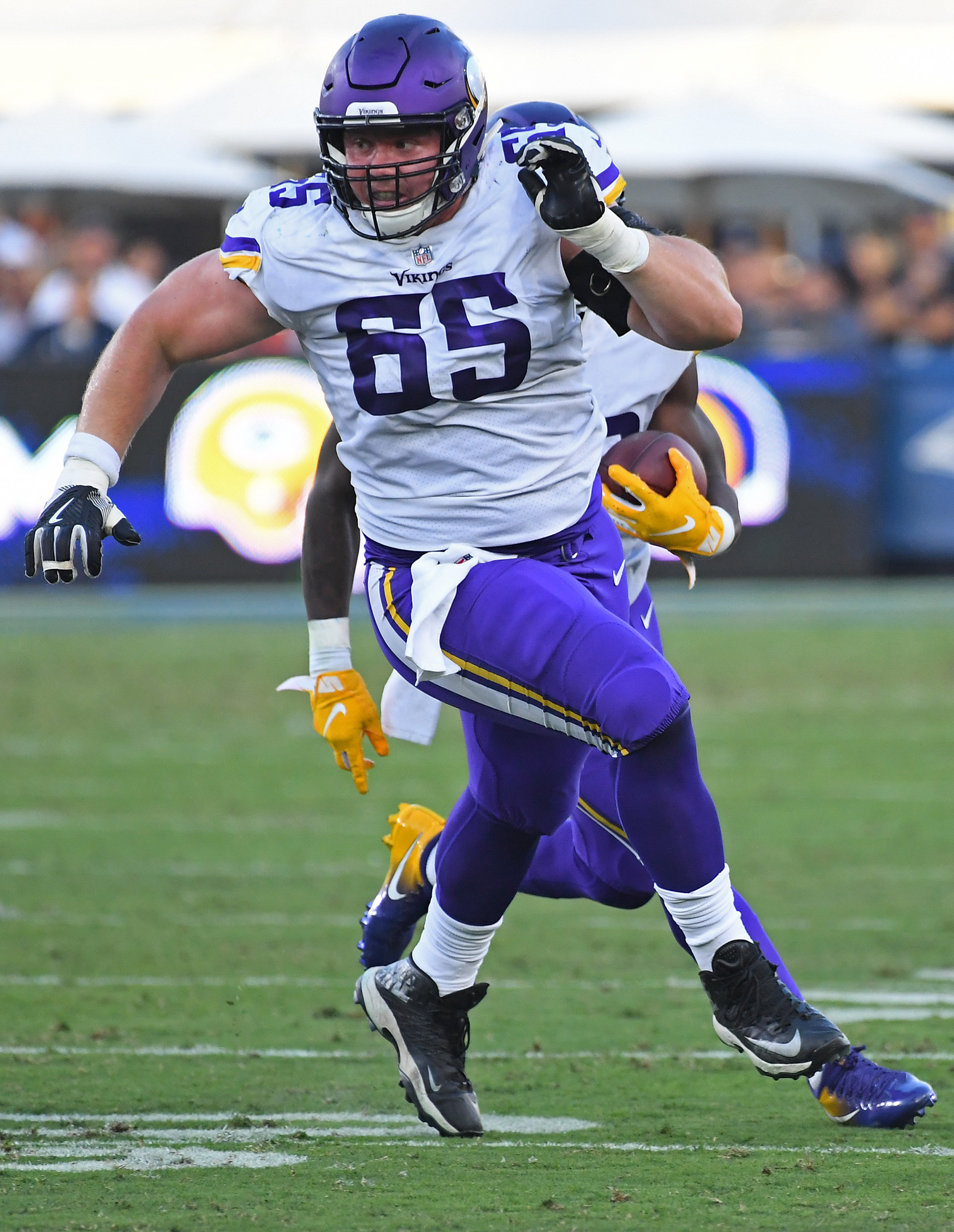 The root of these aspects all come back to his pad level, at least in part, and addressing this would lead to a significant improvement in his run blocking.

While he is unlikely to ever be viewed as a mauler in the run game, because he tended to play with straight legs, he struggled to direct the power he did generate through blocks and it was rare to see him generate forward movement with his blocks:

The knock-on effect of this is that in order to try and match the power of defenders, he tended to lean into blocks at times in order to lend his momentum to his efforts, and this had the downside of putting his weight well out in front of his feet, making it easy for defenders to work him off balance to shed blocks:

As well as causing him to end up off his feet more often than is ideal:

The other effect of playing with a high pad level is that when he strikes to the frame of defenders, he often does so with a slightly downwards motion. This naturally unlocks the elbows and makes is hard for him to fully extend his arms, which in turn makes it harder for him to retain control through blocks and easier for defenders to work him off balance:

Elflein is actually a reasonable run blocker as it is, and if the Panthers do look to use a blocking scheme that doesn’t ask the offensive line to drive defenders off the ball, he should be able to help their run game. However, if he is able to make strides in terms of his knee bend and show the ability to set a consistently good base, he can go from being a reasonable run blocker to being a legitimately very good one. 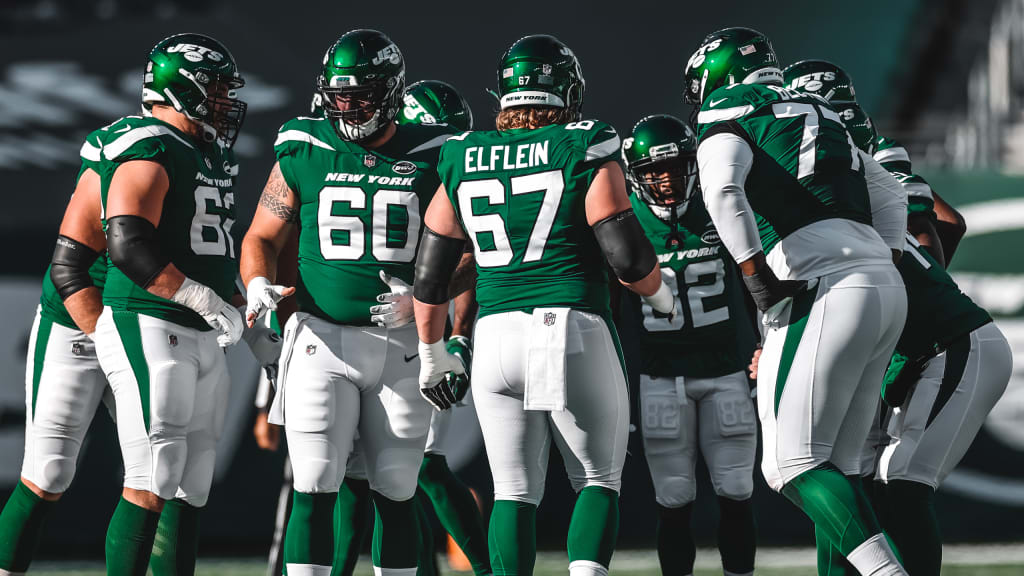 Of course, as Panthers fans are all too aware, playing offensive line is about a lot more than just run blocking, and how Elflein is able to perform as a pass protector is likely going to be the most important factor in determining whether he ends up being viewed as a long-term starting option in Carolina.

On the positive side of things, he does show nice lateral agility with the foot speed to cover ground laterally:

And as in the run game, he does a good job of locating his hands to the frame of defenders:

In the passing game, he built upon this by also showing an ability to counter defenders attempts to get inside hand placement:

Though he does have a light tendency to let his hands drop momentarily after the snap and defenders who look to strike immediately can take advantage:

This is mostly a question of technical discipline rather than ability and should be relatively easy to address – but should not be taken from granted.

He also does a good job of resetting his hands, working his hands back underneath quickly to prevent the defender from being able to drive him upwards to shed the block:

However, as with the run game, his lower body creates issues for him, as can be seen on the play above.

The simplest way this shows up is in his tendency to straighten his legs during plays, similar to in the run game – this raises his pad level and puts his weight out in front of his feet, which makes it far too easy for the defender to work laterally around him, as with all his weight going forward, he has no ability to counter laterally:

This shows up a lot when he is asked to recover laterally early in plays, such as when he has to reach as part of a slide:

Or when reacting to later-arriving rushers:

The issue here is that because his center of gravity is very high, it is hard for him to recover laterally with his feet and so he then almost dives across with his upper body, which puts him completely off balance and after the initial contact the defender is able to work around the block fairly easily.

The solution to this is two-part, as a more consistently good knee bend would certainly help him here, but he also needs to do a better job of trusting his feet to put him in the right position and waiting to make contact to force the defender to take the long way around to get to the quarterback. 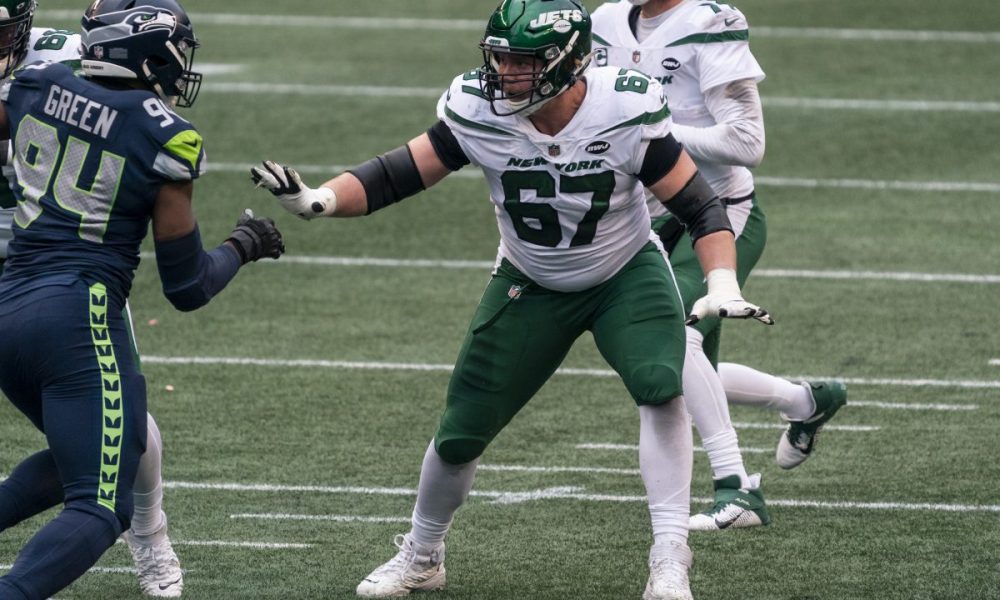 The final effect that his poor knee bend can have is his arm extension, again a common theme between the run and passing games. While he did a good job of locating his hands, the limited arm extension he plays with makes it hard for him to control blocks and is going to cause him to get flagged for holding from time to time until he is able to address it:

It is also worth acknowledging the mental aspect of pass protection, and that is hard to assess with Elflein at times, due to the struggles the Jets’ offensive line had in this regard throughout last season. Here, for example, he would ideally swap with Becton (the left tackle) to counter the twist but with Becton completely out of position to hand over blocks, it’s really a question of which defender is he going to allow to run unimpeded to the quarterback:

And while we should be careful not to make too much from a small sample size, on the following play, it was nice to see him recognize the late-arriving blitzer from the slot and make the block:

Elflein certainly moves well enough to be an effective blocker in the NFL, and his consistently good hand placement and footwork in the run game should be encouraging. However, he is currently limited by his pad level, both in pass protection and as a run blocker.

Pat Meyer spoke specifically at the Senior Bowl about the ability to judge a player’s potential to improve his pad level from tape alone:

“I think that’s something you can evaluate when you’re watching film.” 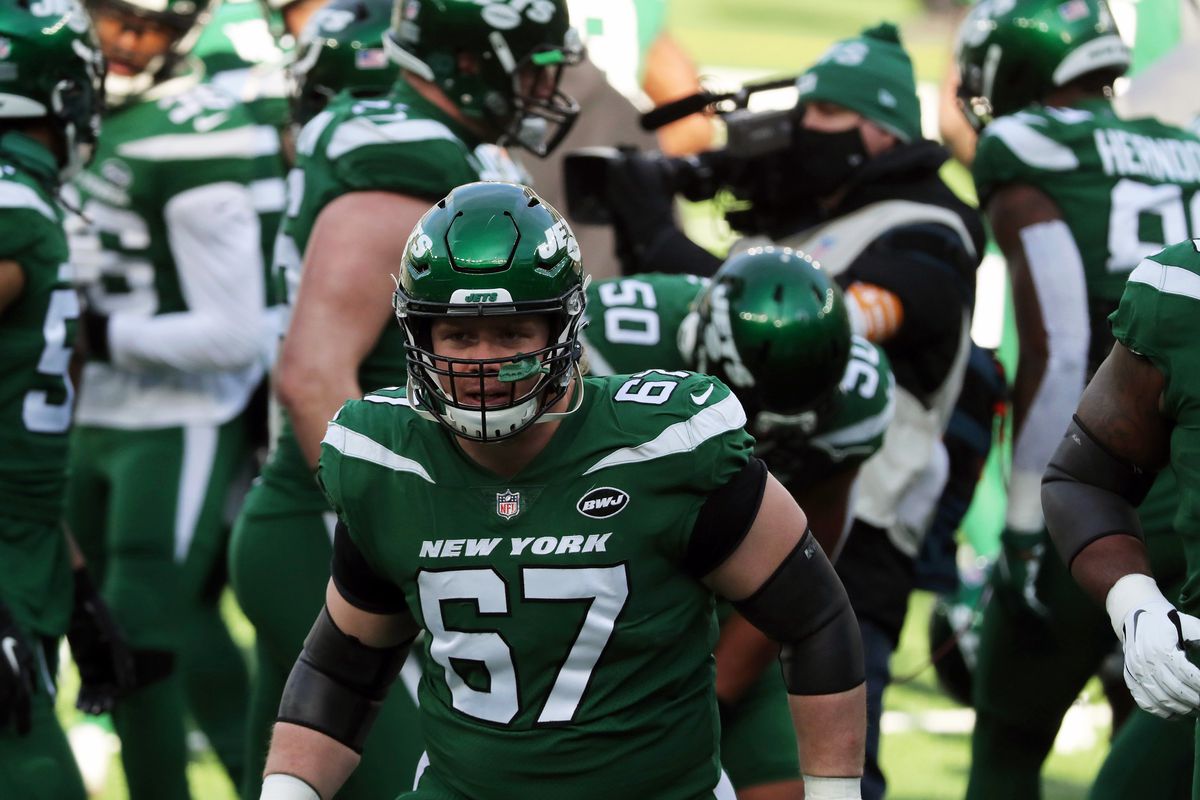 If Meyer is right, and he likes what he sees from Elflein in this regard, then this is a signing that does have real potential.

With a more consistently good lower body, Elflein can be a dependable starting player who can compete to start at guard in 2021. Given his age, the length and value of the contract (reportedly 3 years, $13.5m, $6m of which is guaranteed) as well as his ability to play both guard and center, this could be a solid signing for the Panthers.

As they found out last year with Stephen Weatherly, signing a veteran player with developmental upside is always a risk – but given the value that Elflein will have as depth even without any improvement and that he is getting over three years just $1m more than Weatherly was getting in two, this looks to be a solid, if unspectacular piece of business for the Panthers.