Film Room: How Shi Smith Fits Into The Panthers’ Offense 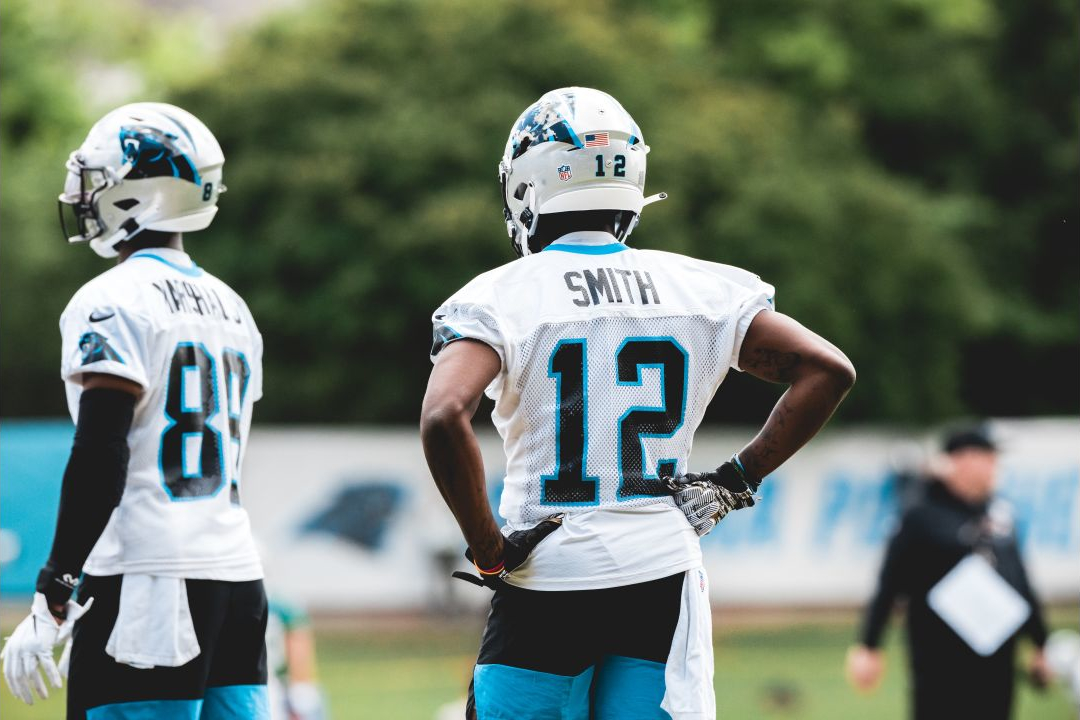 One issue the Panthers ran into at times in 2020 was the lack of receiver depth, as aside from the three main receivers they struggled to get any production of note out of the position group. While the Panthers signed David Moore from the Seahawks to replace some of the production that was lost when Curtis Samuel signed with Washington, they also made a point of targeting the position twice in the 2021 NFL Draft.

We have already looked at Terrace Marshall, who the Panthers hope can become a major contributor to the offense with time, but what about the second receiver they selected; former South Carolina Gamecock Shi Smith; who was taken with the second of their three sixth round picks? What can he contribute to the Panthers both in 2021 and going forwards?

We’ve taken a look at the film to find out. 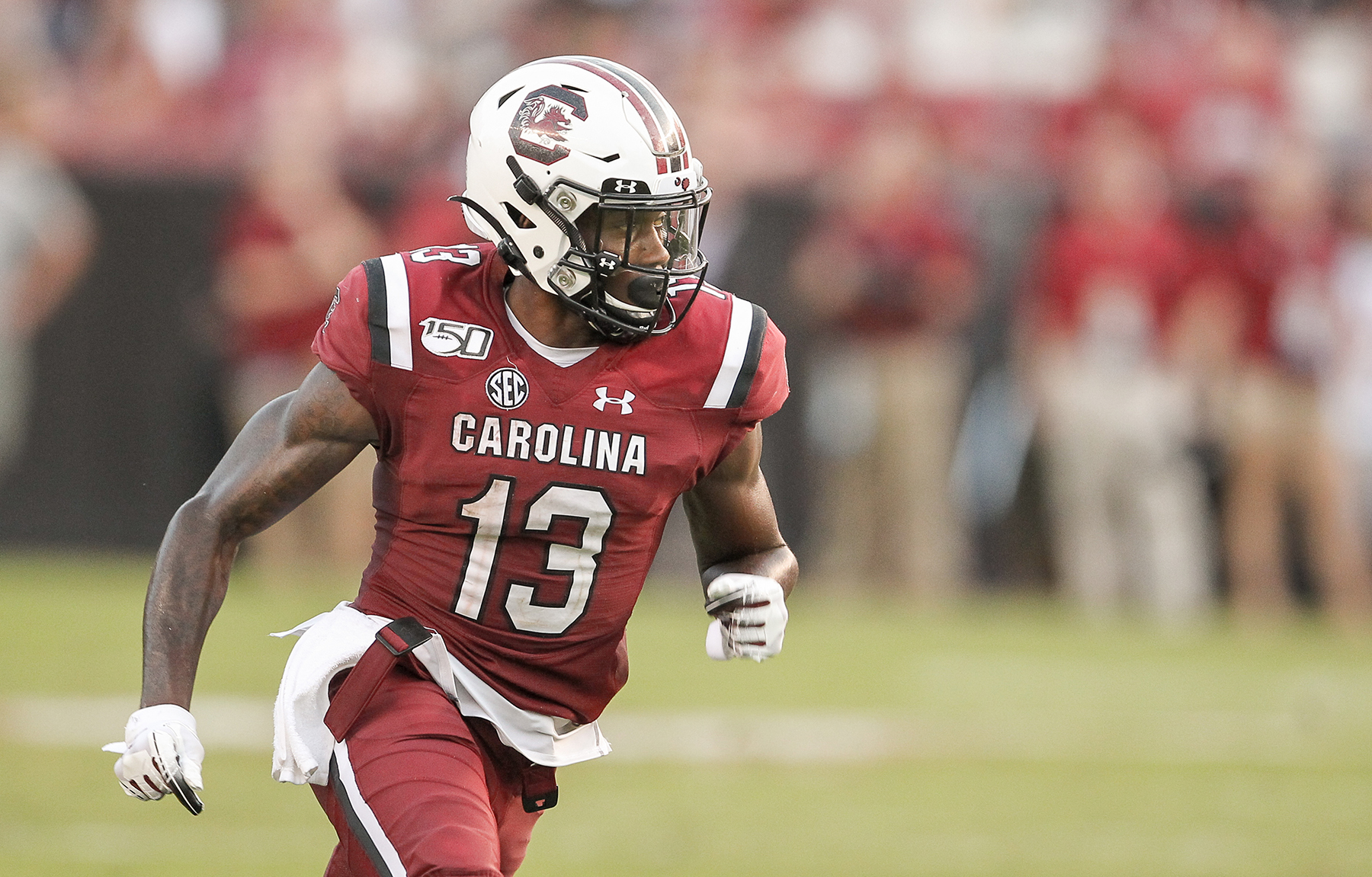 Smith isn’t a pure burner, running in the low-to-mid 4.4s at his pro day, but he also wasn’t given that much of an opportunity to make the most out of his vertical speed in a South Carolina offense that didn’t excel at pushing the ball down the field. There were flashes of quickness off the line on tape, and he does show some ability to create vertical separation down the field:

But this is something that he will have more of a chance to show-off in training camp than he did for much of his college career.

In terms of catching the ball, he is really something of a mixed bag, as he shows a nice ability to make catches away from his frame at times, but there are also a few times where he looks to arm-catch the ball with poor results:

And while he’s not afraid to hold on knowing that he is going to take a hit:

He isn’t going to consistently be making contested catches through contact over the middle of the field either:

It is worth noting at this point that South Carolina didn’t have the highest level of QB play in 2020, and Smith was frequently asked to adjust to poorly thrown balls:

On plays like these it is hard to blame Smith for the failure to complete the pass, in all three cases the passes were not where they needed to be, especially given how short the throws were, but it is also true to say that he didn’t do the best job of adjusting to poor throws and while there were almost no genuine drops on tape, there aren’t a huge number of receptions that he makes that you wouldn’t expect most NFL receivers to make on a consistent basis.

Finally in terms of his hands, though probably not very surprisingly given his size, he is not going to be somebody the Panthers are likely to be throwing fades to in the back of the endzone:

In terms of the basic traits to being an NFL receiver then, Smith is perfectly good but nothing exceptional. He isn’t going to see the field purely for his burning speed or his excellent hands, though in both regards he is at least average by NFL standards. Instead, he is going to earn his role through his ability to create separation before the catch, and to add value after it.

So how does he get on in these regards? 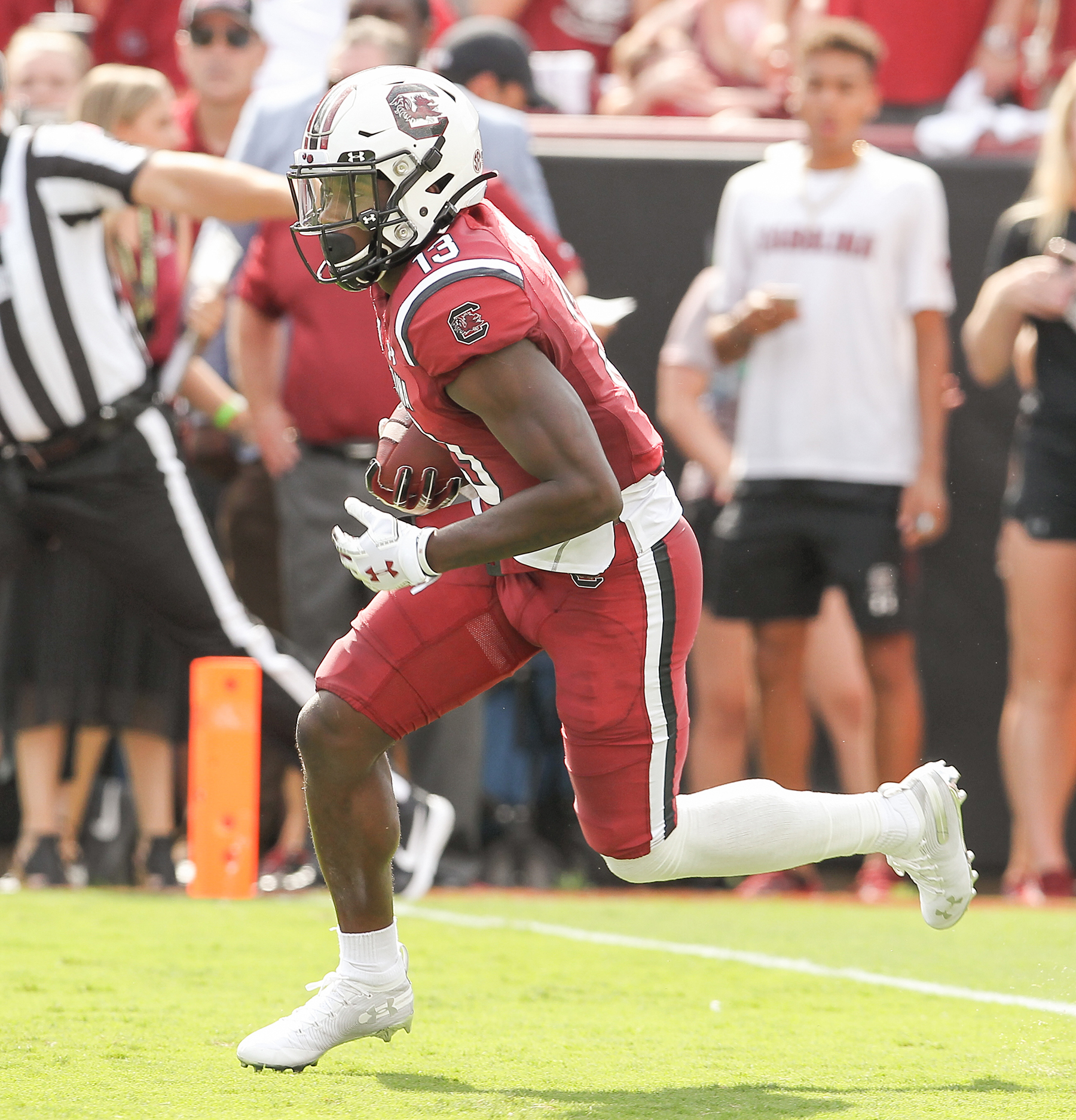 After the catch, Smith has the quickness and ability to create problems for a defense, and South Carolina made a real effort to engineer the ball into his hands, both as a receiver:

And by handing the ball off to him directly:

And while he is likely to be less of a featured player with the Panthers than he was at South Carolina, he can still add value by turning shorter receptions into longer gains:

With that said, he does need to make sure that he doesn’t try and turn every play into a touchdown, as there were a couple of times on tape where he ended up losing yardage compared to what was on offer by looking to break the big play rather than taking the space that was there:

As with most receivers coming from the college game, Smith is going to go from being the first option in an offense to being a rotation player who will need to make the most of the opportunities he gets, and while he won’t be able to rely on being engineered open as an early read with quite the same consistency as was the case in college, if he can take short routes and add yards to them after the catch then he is going to find himself on the field, even if it’s not in a starring role. 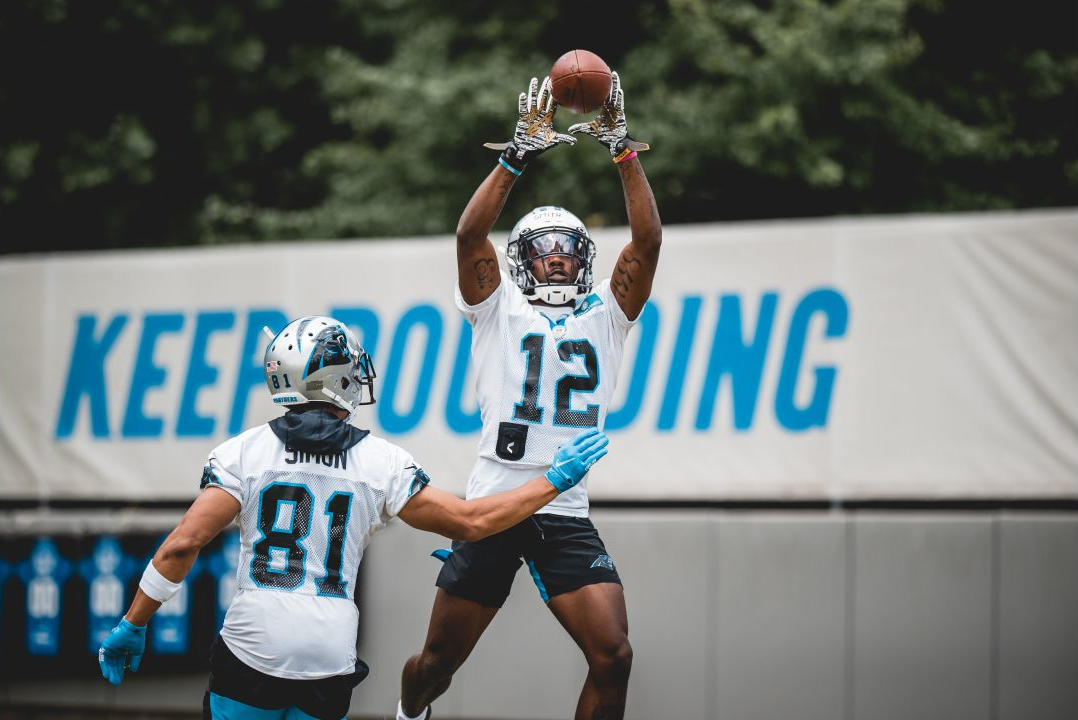 The way for him to become a major piece in the offense, however, is going to be through his route running, and this is the area where he has the most potential value and where there is still a fair amount of work to do. Due to his size, he is likely to spend a lot of time in the slot, and while there are some smaller receivers who have thrived on the outside, those are generally more physical players who are able to excel against press coverage.

While Smith didn’t face a ton of press at South Carolina, he certainly hasn’t proven that he can consistently use footwork to work free against bigger, more physical defenders, and did struggle with physicality both through routes:

And around the catch point:

As a route runner, he does show some nice things in terms of his ability to use his vertical speed to push a cushion and then break back laterally to create separation:

Though he can sometimes go a little bit half-speed, which could get him into trouble against more consistently athletic defenders at the NFL level:

For him to excel in the NFL, however, he is going to need to show an ability to create separation against tight man coverage, which was not a consistent feature of his game in college. There are flashes, and plays like the following should create a reasonable amount of optimism about the player he can develop into, but the Panthers’ coaches are going to hope that he can be far more consistent in this regard:

Here, he does a really nice job of getting the defender to square his feet after the initial vertical cut which then allows him to break free going to the outside. If he can take these principles and apply them to a wider range of routes at a high level then he has a chance to be a natural fit for the role that Curtis Samuel played in the offense at times in 2020, but without a high level of route running he is going to struggle to separate himself from the pack when it comes to the Panthers depth receivers. 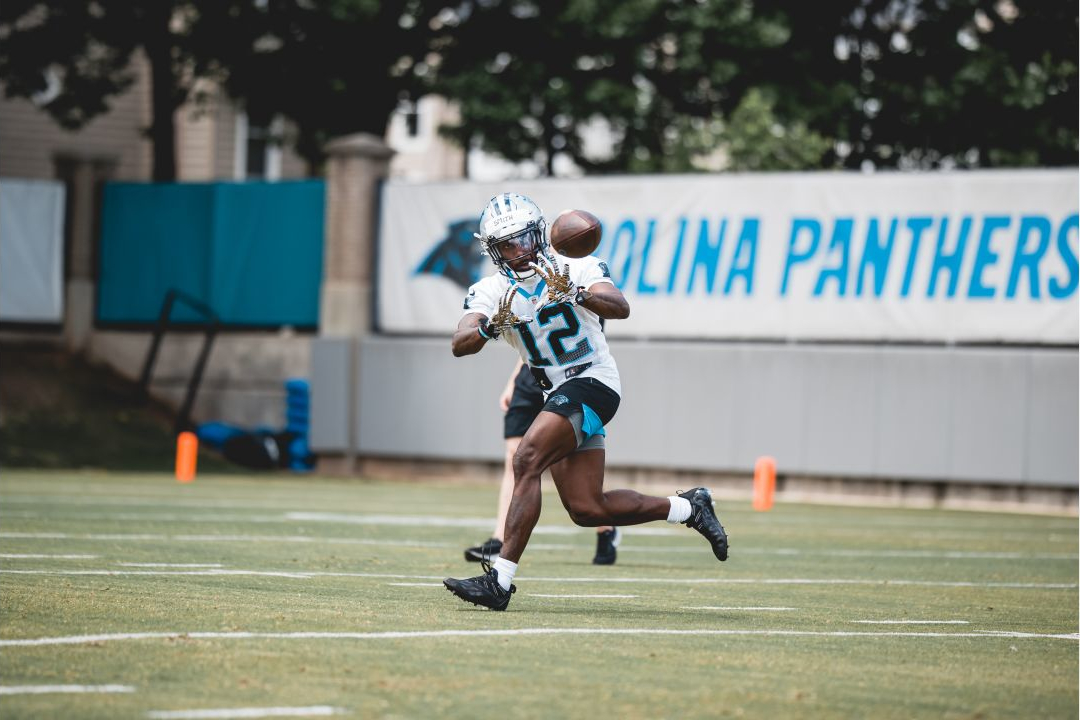 It is also worth noting that, while teams don’t draft receivers for their blocking, Smith does need to improve in this regard, as he can be far too passive at times:

And he needs to play with a more stable and wider base as he lets his feet get too narrow which creates issues both locating blocks:

And controlling blocks when he does get his hands located:

This obviously isn’t going to be what makes or breaks Smith as a receiver in the NFL, but for a player who is likely going to be fighting for a roster spot in camp, these are the details that are going to be important.

The final aspect of Smith’s game that could be relevant to his chances to make the final roster is his ability to contribute on special teams as a returner, and his numbers as a returner from college of 27 kick returns for 448 yards (16.6 yards per return) are decent but nothing hugely special. He will likely get a chance to return kicks during camp but is going to have to compete with the likes of David Moore (the receiver not the offensive lineman) and others. 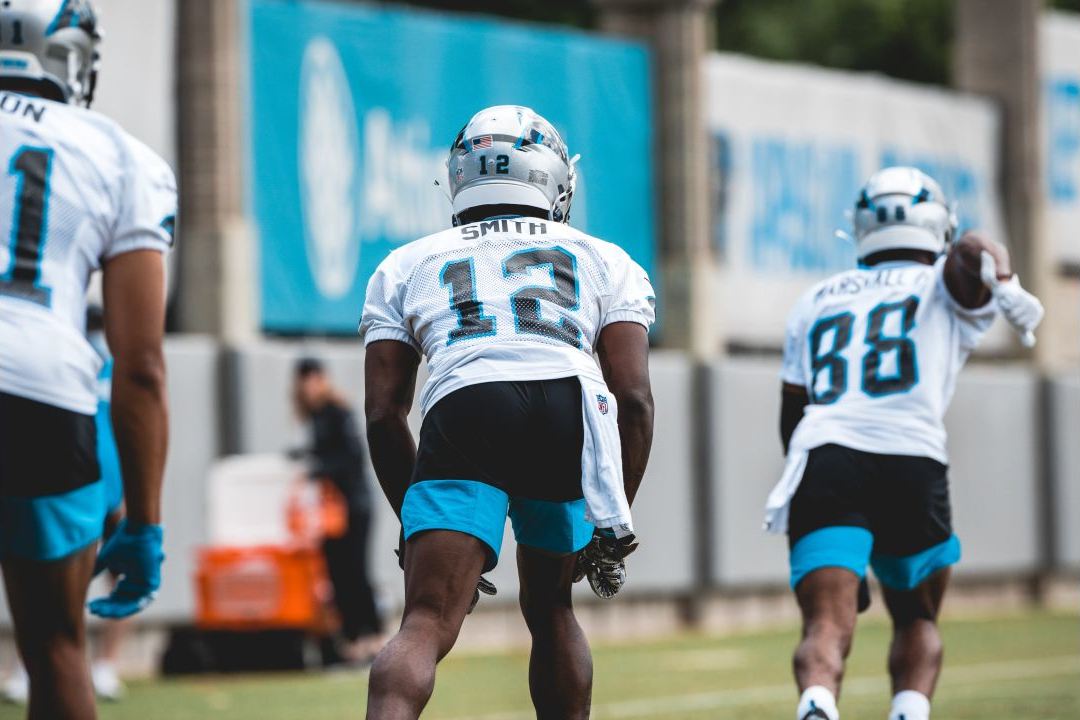 Overall, Shi Smith is a player who has the core skills to be an effective NFL receiver, and there are flashes of route running that, if they can become a more consistent part of his game, would make him an excellent selection in the sixth round of the draft. In the short term, Smith is going to have to excel on special teams and show continued improvement as a receiver in order to be secure in a roster spot, but in a receiver group that is short on proven options outside the two main receivers he should get a chance to see the field early on if he can impress in camp.