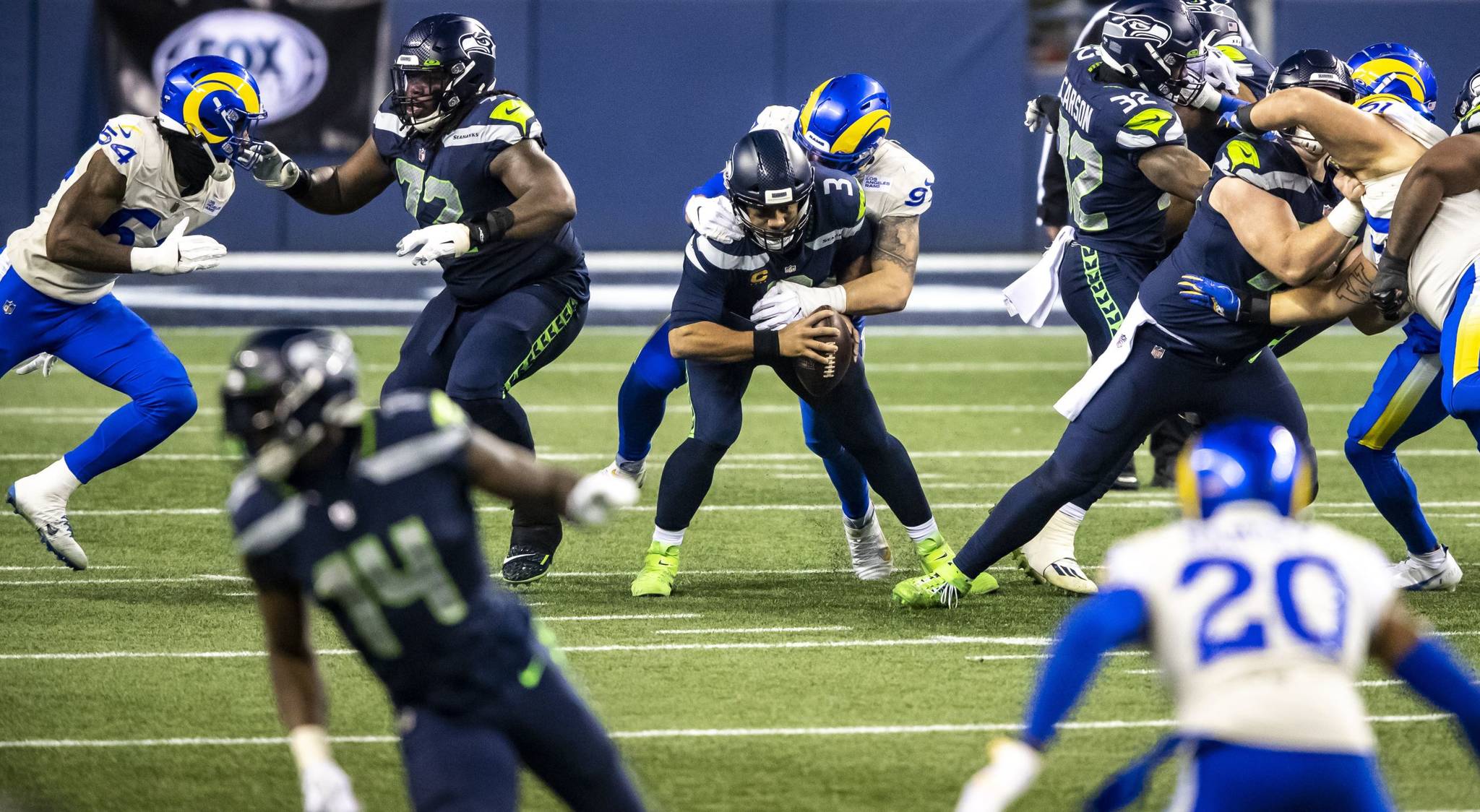 In his end-of-season press conference back in January, Matt Rhule mentioned pass rush as one of his priorities for the offseason, and while the Panthers will hope that the development of their young defensive linesmen will help in this regard, part of the solution was always going to lie in players who weren’t on the roster in 2020.

Shortly after a major new piece in that equation was announced in the form of Haason Reddick, the Panthers announced the addition of a second new defensive linesman with Morgan Fox signing a two-year deal after spending his career thus far with the Rams. At 6’3 and 275lbs, Fox has shown the flexibility to play across the defensive line and aged 26 is coming off a career year where he notched six sacks, eight TFLs and nine QB hits.

While this is all very well, the Panthers will hope that his best play is still ahead of him, so to find out more we’ve taken a look at the tape to see how he can help the Panthers, and how he can continue to improve yet further. 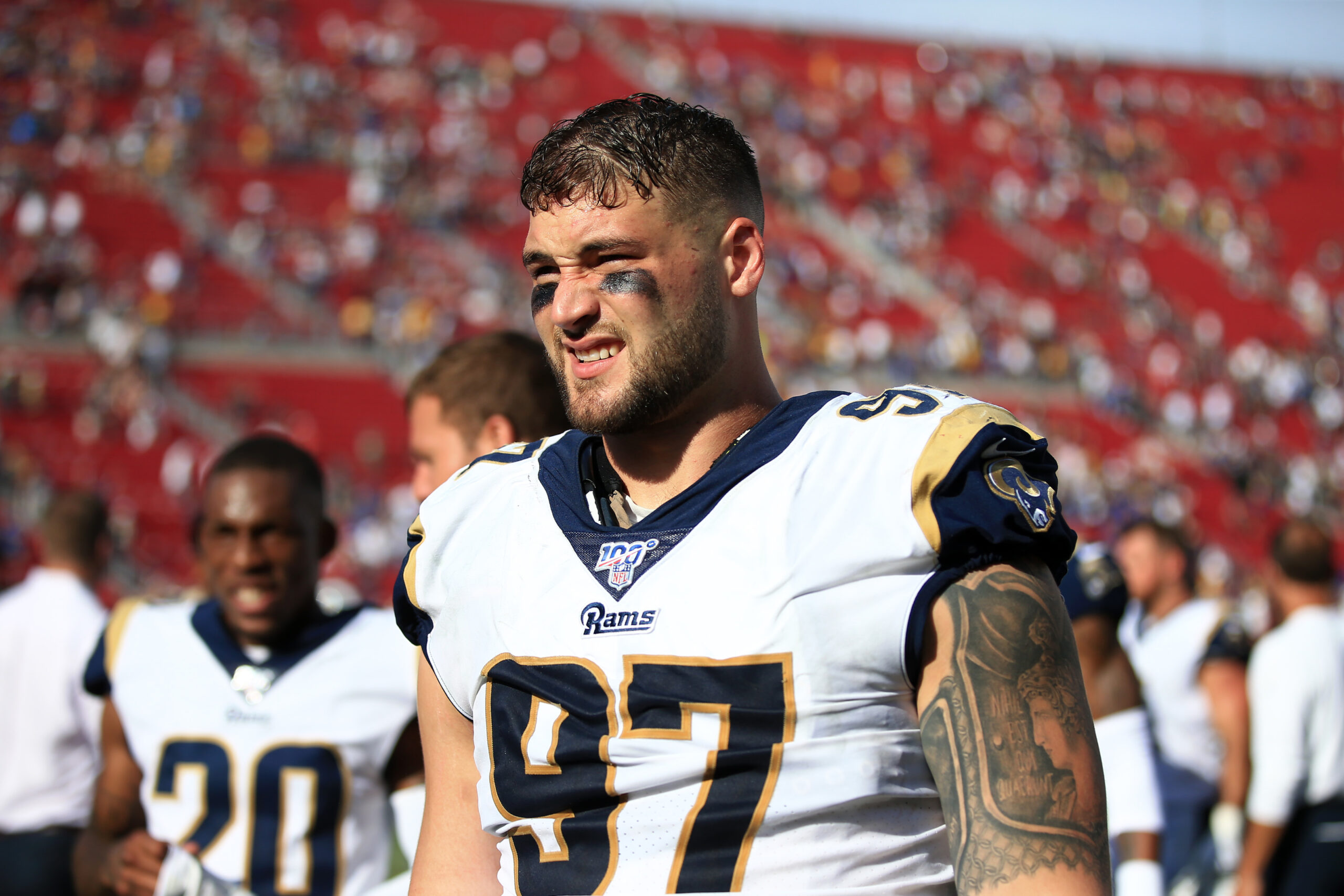 As a pass rusher, Fox spent time all over the front for the Rams but did his best work as an interior rush in obvious passing situations. While he isn’t a super explosive athlete, he has enough speed to generate leverage around the edge and does an excellent job of using his inside arm to turn the corner and work back to the quarterback with decent enough bend (please note, Fox wears #97):

And when he is unable to win with speed alone, he shows a reasonably developed pass rushing arsenal, using that same inside arm to turn natural leverage into penetration:

And probably his best plays come when he is able to use this in combination with his quickness to generate, and then capitalize upon, leverage inside against slower offensive linemen:

And even flashes a pretty nice swim move:

Though this is still something of a work-in-progress:

The issue here is something that is a persistent area for potential improvement for Fox, namely his knee bend. 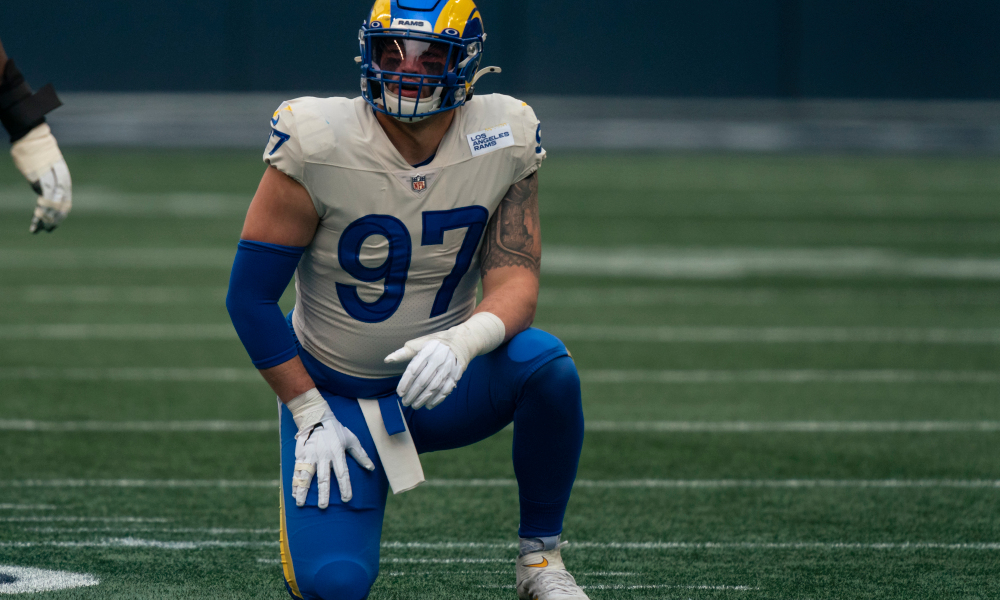 The biggest way it shows up, however, is that because he tends to stand quite vertical when he rushes, he gives blockers a large target to aim for with their punch while also limiting the extent to which he is able to keep blockers off his frame with good arm extension. This means that blockers are able to get inside hand placement against him more often than is ideal:

This can also cause him to punch quite high on blockers, sometimes having to grab to their shoulders rather than being able to locate hands inside:

What this all leads to is the fact that there are currently too many snaps where blockers are able to get inside hand placement and block him out of plays entirely:

Encouragingly, when he does get his hands even close to well-located with reasonable knee bend, he does show the ability to use his good upper body strength to work blockers off balance and release laterally:

Even though he is able to be highly effective at times despite this, improving the consistency of his pad level should help him turn flashes of high-level pass rushing into consistent pressure. 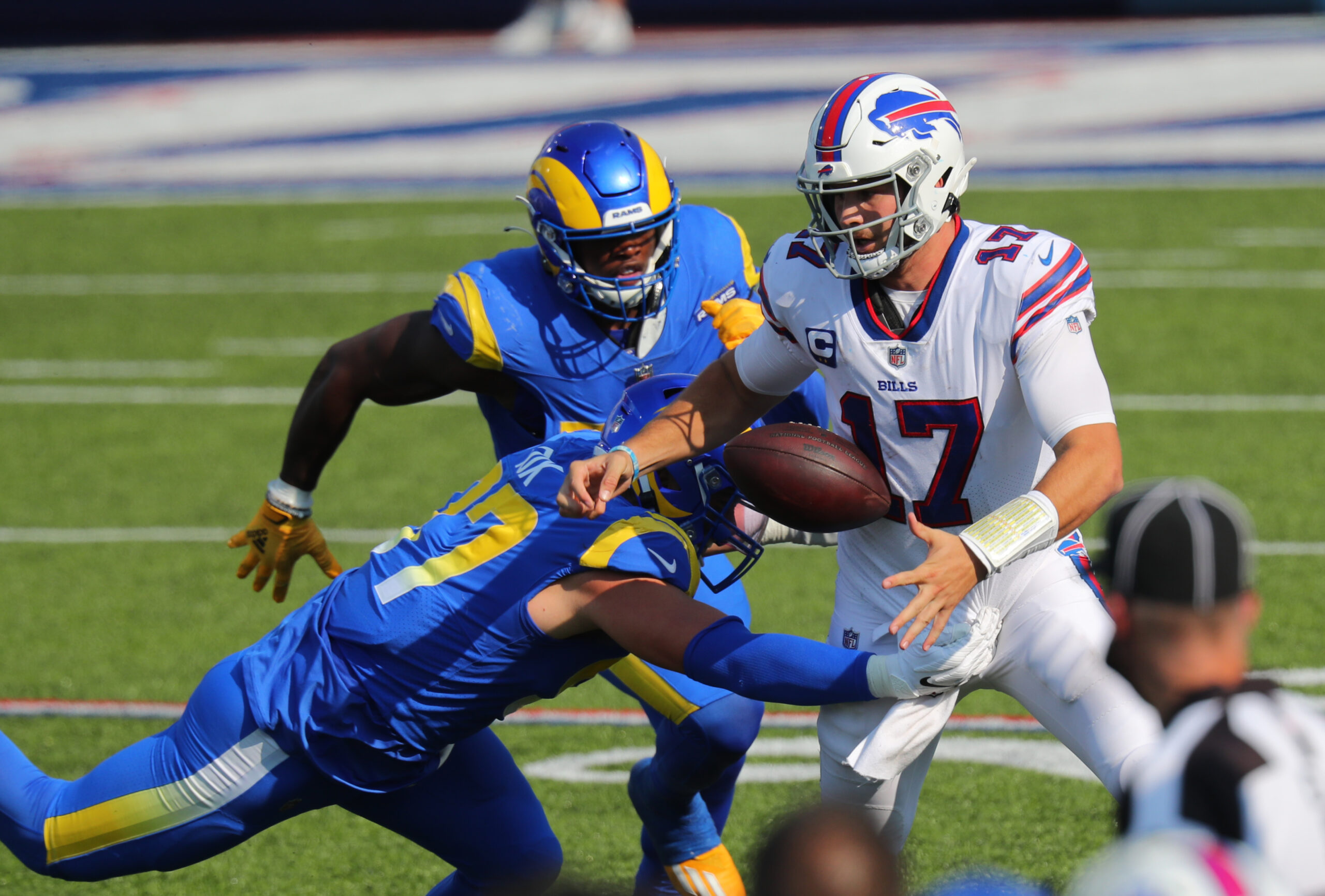 ORCHARD PARK, NY – SEPTEMBER 27: Morgan Fox #97 of the Los Angeles Rams tackles Josh Allen #17 of the Buffalo Bills and knocks the ball loose during the second half at Bills Stadium on September 27, 2020 in Orchard Park, New York. Bills beat the Rams 35 to 32. (Photo by Timothy T Ludwig/Getty Images)

The encouraging thing with this is that lots of the other things to have an effective power rush are there and, while he is unlikely to be consistently bull-rushing guards back to the quarterback off play-action, his quickness can often force blockers off-balance creating opportunities for him to have real success with a developed power counter.

At the moment, however, blockers are able to sacrifice their own pad level and center-of-gravity at times in order to counter his quickness without being punished:

Fox really isn’t far from having a really well-balanced rush attack and, while it shouldn’t be taken for granted that he can, if he makes improvements to his knee bend then he can be a real force as a pass rusher, especially on the interior. Even without that, he can be a valuable situational pass-rusher inside while offering enough around the edge to give him the flexibility to play there when the Panthers opt for a four man front. 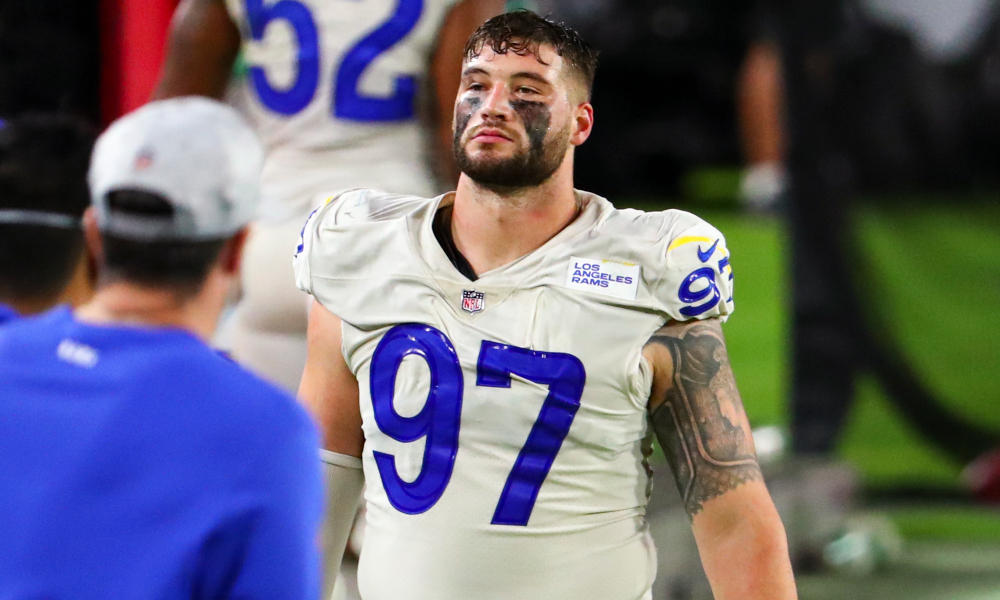 Los Angeles Rams defensive end Morgan Fox (97) looks on from the sidelines during the second half of an NFL Football game against the Tampa Bay Buccaneers, Monday, Nov. 23, 2020, in Tampa, Fla. (AP Photo/Kevin Sabitus)

Of course, to get significant playing time on the defense line you also have to be able to play against the run. While there are still some plays against the run where his pad level could stand to improve:

On the whole this is much more consistent against the run than it is as a pass rusher. This allows him to showcase the consistent hand placement:

As well as the arm extension to keep his frame free:

That he flashes the potential to do as a pass rusher.

This leads to some impressive plays where he is able to hold ground at the point of attack before shedding to make the tackle:

Playing the edge in a 4-3, Fox should be able to be a plus run defender and while he is able to hold his own most of the time playing inside as a 3-4 DE against the run, he can get outmatched at times for raw power and is probably not somebody who should be asked to spend a lot of time as the 3-tech in a 4-3 outside of obvious passing situations:

In terms of usage, Fox therefore seems best suited to the strong-side DE role that the Panthers seem to like so much and, while Yetur Gross-Matos is likely to also spend some time playing this role, with Efe Obada and Stephen Weatherly both departing this offseason, Fox should be to take over much of the duties they performed as rotational pieces. 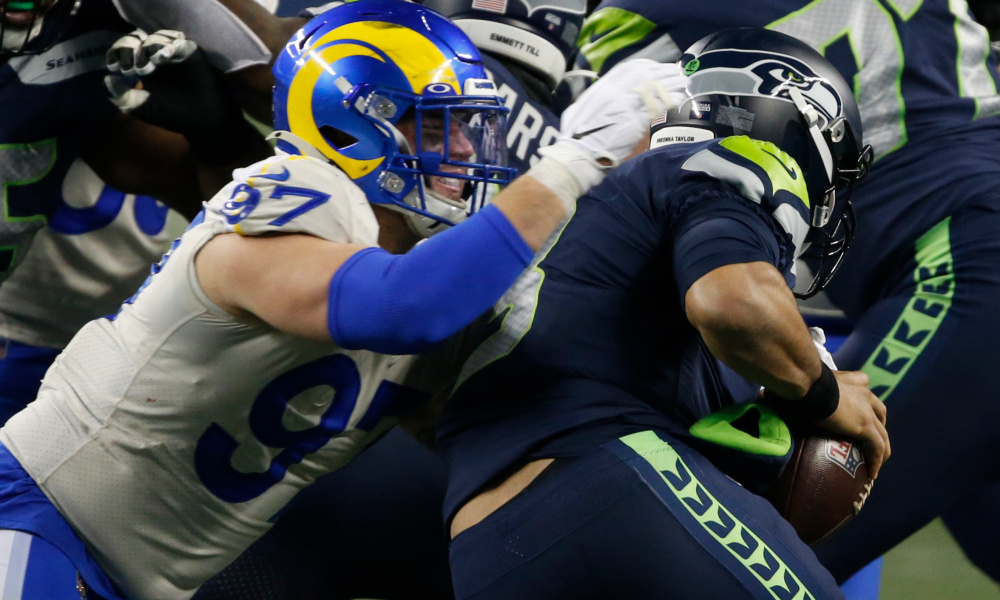 As of right now, Fox would probably be penciled in as the starting defensive tackle alongside Derrick Brown, but while he certainly gives the Panthers some insurance in that regard, his best role will likely be as a rotational piece who can on all three downs at different points across the line and who gives them yet more flexibility in terms of alignment up front.

Though the Panthers are likely not done adding interior pass rushers this offseason, given how important the pass rush is to the zone-heavy defenses Phil Snow has run to this point, there should be enough snaps to go around with the Panthers likely rotating enthusiastically in order to keep players fresh enough to have maximum impact late in games.

Fox might only be one piece in Phil Snow’s pass rushing puzzle, but to quote Lester Freeman, all the pieces matter.