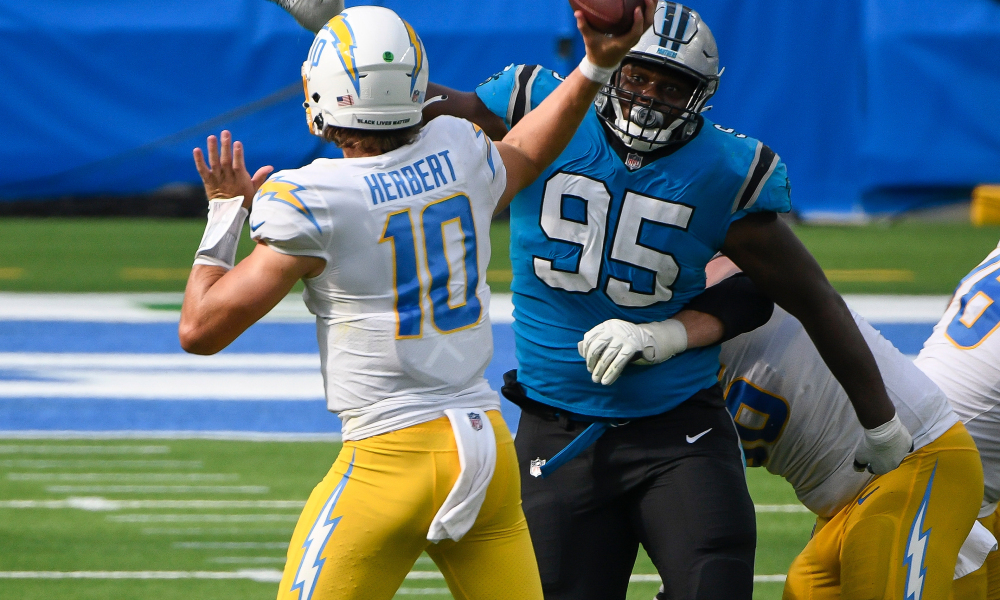 Every year, teams look to their draft classes and UDFAs to provide optimism and a view of where their team might be going, but for a Panthers squad that has seen wholesale changes over the last year, the draft class is not only a view of the future but a very major part of the present, with five rookies playing at least a rotational role on defense as well as two making an impact on special teams.

So, with that in mind, how have the Panthers’ rookies fared through the first quarter of the season, and how can they continue to develop going forward?

Brown has certainly made some impressive plays against the run over the first four weeks of the season, accruing 5 TFLs – second-most in the entire NFL – as well as a number of run stuffs. His power is evident on tape and he shows generally good pad level and hand usage to allow him to cause real problems for anybody trying to block him one-on-one against the run:

And moves extremely well for a man of his size:

What is possibly even more concerning for opposing offenses is that there is still a lot of room for Brown to improve. As good as he has been against the run in terms of TFLs, there are still occasions where he doesn’t quite get his pad level right and makes it easy for opponents to move him off the ball and putting himself off-balance:

However, the biggest area for improvement is, as many expected, is his pass rush – while he has been borderline dominant in the run game, he is yet to register a QB Hit so far this season. His power should be able to provide the basis for an effective pass rush:

But in order to make the most of this he needs to be able to play with consistently good pad level, hand placement and arm extension. If he can do this, he has the chance to force defenders off balance with his power, or use the threat of his power to drive them off-balance in anticipation. Right now though, there are too many plays where he gets too high and makes it too easy for blockers to get hands on him and drive him upwards and negate the threat of his power:

Brown has done a lot of nice things, and the Panthers have largely gotten what they should have expected thus far – but if he can continue to get the basics down in terms of his pass rush, he has the potential to take several further steps towards being an every-down impact player.

The Panthers’ first second-round pick didn’t get off to the best of starts in the NFL, struggling against the run against the Raiders before missing time over the next two weeks:

These struggles against the run are something that showed up on tape during his time at Penn State, and the crux of the issue seems to be his pad level, as too often he gets far too high and negates his own power and offering a big target for blockers.

This is something has shown up as a pass rusher as well, especially against the Raiders:

Like with Brown, Gross-Matos has a ton of talent but needs to make sure he is getting the basic technique down every snap – and then allowing his talent to generate the big plays. However, he did appear to take a step forward against the Bucs; he certainly showed his value as a pass rusher with good hand usage to work around the edge and force the strip-sack:

Gross-Matos is likely going to be a rotational piece for this year, rotating with the other bigger defensive ends in Stephen Weatherly and Efe Obada, but he certainly has the talent to be an impact piece, and has flashed that at times, but he is likely to require a little more time to develop than some of the other major pieces the Panthers have brought in this offseason.

Jeremy Chinn has been one of the brightest spots on the Panthers through the first month of the season, leading all rookies in tackles and making an impact all over the field. What is possibly most impressive is how, coming from an FCS school, he has not been able to adjust to the speed of the NFL game but also be able to show an ability to master the defense from a whole range of positions.

He has the range and tackling technique to mop up plays to the flats:

Has lined up in centerfield and dropped into deep coverage:

And given that one of the biggest question-marks about him coming out was his ability to work off and around blocks, he has also shown a really nice ability to work to the ball past blockers:

As things stand, he has already shown that he can be a key piece in the Panthers’ defense moving forward, but if he can show that he can be a top-tier defender in coverage, that would help truly elevate him into being a defensive star.

He hasn’t been targeted a huge amount in zone and it will likely take time for him to feel confident in what he is seeing to start trying to be really aggressive in coverage, but he could stand to work on his footwork at the head of routes, as a couple of times players have been able to generate some separation against him when he doesn’t fully open his hips during transition:

Panther fans should be extremely happy with how Chinn has played thus far; coming from an FCS school, the fact that he is already playing as fast as he is in a number of roles is a great sign in terms of his ability to continue to master the mental side of the game. He certainly has all the physical tools needed to be an extremely effective player all over the Panthers’ defense.

The Panthers probably drafted Pride with an expectation that he would largely be used on special teams with some occasional snaps as the third CB, but with Eli Apple having missed every defensive snap so far this season and Donte Jackson also struggling through injury at points, Pride has been asked to play a larger role than the Panthers would probably have hoped.

It would be hard to say that he has really stood out in coverage, but he hasn’t been a complete disaster either, though the Panthers have also run quite a lot of zone which works to protect their corners somewhat. He did get beaten for a touchdown against the Raiders:

And was potentially at fault for the blown coverage earlier in that game as well:

But he has at least been respectable and should hopefully be given some more time to develop while contributing on special teams if the Panthers are able to get at least one of Jackson and Apple healthy for an extended period. On the plus side, he has shown himself willing to make a play against the run, even if he probably won’t be considered for a linebacker conversion anytime soon:

Pride was always going to be in a difficult situation if asked to play early, and his tape out of Notre Dame suggested that he should probably be given some time to develop before seeing the field, but he has been solid when he has been asked to play so far.

With KK Short out for two of the games so far this season, Bravvion Roy has likely been asked to play a larger role than many expected, at least before being inactive against the Cardinals.

He has shown something of a mixed set of performances on tape, with some nice quickness penetration against the run:

And a good one-arm grab at the line:

Being contrasted by some inconsistent pad level at times making him a little too easy to move:

Given how much the Panthers have looked to use defensive ends as 3-techs so far this season, Roy could struggle to get much playing time moving forward with Zach Kerr establishing himself as the clear #3 defensive tackle – but against teams that are more run-focused he should get a chance to show what he can do. In terms of how he can improve, like with Gross-Matos and Brown continuing to improve his pad level and the basic technique of getting their hands consistently located with good arm extension will help – if Roy can use his good quickness for his size to create consistent gap penetration to go with this then he will make it hard for coaches not to have him active in future.

Thomas Oliver was always drafted as a developmental option having only recently converted from receiver – the fact that he hasn’t been active so far really shouldn’t come as much of a surprise. It would be good if he can earn a role on special teams as the season goes on, but if not, this should really be treated a a redshirt year for him with the expectation being that he will come in and compete for playing time more seriously in 2021.

Related:   It Is What It Is: Matt Rhule, Teddy Bridgewater, Robby Anderson, Matt Paradis & Sam Franklin

The Panthers signed Joseph Charlton when Michael Palardy got injured, and given his intermittent struggles in camp, many expected him to be a short term solution who is unlikely to hand around in the NFL beyond this season.

However, through four games he is one of just six punters in the NFL to be averaging over 50 yards-per-punt and while that is still on a relatively small sample size, he has a chance to at least earn himself the right to compete for the role in camp next year and potentially give the Panthers a tradeable asset if he doesn’t win the role.

The Panthers signed Franklin out of Temple to offer a similar hybrid defensive player to Chinn – while there was almost no chance of him earning a spot as a part of the regular defensive personnel, he really impressed in camp and has earned himself not just a chance to be a special teams contributor, but also to stake a claim to any defensive rotation snaps that might come around at linebacker. While the likes of Jermaine Carter and Adarius Taylor will also be expected to get at any snaps that don’t go to Thompson, Whitehead or Chinn, the fact that he has managed five defensive snaps so far this season should be seen as a real achievement.

What is more, if you can keep making plays like this on special teams then you are going to keep getting noticed by coaches:

On the whole, the Panthers should be really happy with the performance of their rookies thus far – while there is definitely room for further growth, there should be little doubt that this group has the talent to make significant contributions moving forward, and that is before we get to fifth-round pick Kenny Robinson who looks to be doing well enough on the practice squad that the Panthers have protected him this past week and UDFA Omar Bayless who was on track to earning a role before injury sent him to IR.

This is a really deep group that the Panthers have as a rookie class – not to mention that they have two legitimate contenders for Defensive Rookie Of The Year through the first month of the season.