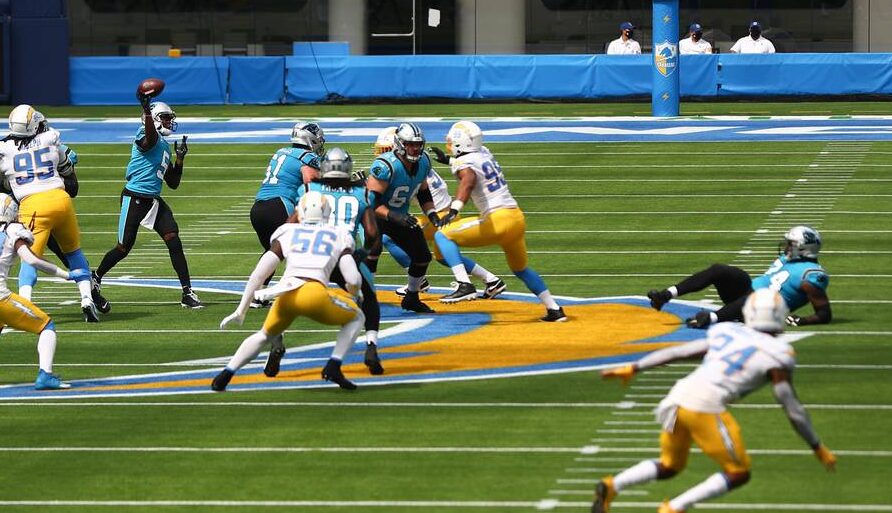 Fans would have been forgiven for thinking the Panthers were still in the Ron Rivera Era at points during Sunday’s game against the Chargers – in the absence of Russell Okung, Carolina looked to rotate their left tackles – similar to what they did out of desperation with Daryl Williams ineffective and Greg Little injured last season before ultimately going with Dennis Daley for the bulk of 2019.

Fast forward a season – and one coaching staff – into the future and the rotation on Sunday seems just as confusing as it was last season. Pulling 2019 second-round pick Little after a few series in favor of a lineman claimed off waivers only a few weeks ago is a pretty good indication that the Panthers don’t feel super confident in either tackle right now – but while it is not clear how much longer Okung will be out, the Panthers really have to settle on a backup for the short term. Without the luxury of a preseason to get a first-hand look at Little, they’ll have to use the tape they have against the Chargers to evaluate where they are with the position moving forward.

So then, what can we learn from the tape about where the Panthers stand at left tackle?

When the Panthers traded up in the second round to select Greg Little back in 2019, the expectation was that even if he didn’t step immediately into the starting lineup, he would be their left tackle of the future.

There has never really been doubt about whether Little has the talent – but the discipline of his technique and his ability to master the details of the offense has held him back, not aided by a couple of unfortunate injuries as a rookie. Those who want to use the Little trade-up and selection as a club to beat Hurney with will probably have latched onto a couple of early pressures that he allowed – for all Little’s natural talent, one of them certainly exemplified what is still his biggest issue, using his foot speed to maximum effect:

This is something you see quite a bit from less-talented tackles, a player setting wide to counter the speed rush and sacrificing the inside shoulder as a result.

The confusing aspect with Little has always been that he almost never actually gets beaten by the speed rush, but rather seems to struggle for judging how much he needs to respect the speed of the opponent, here simply running himself wide of the play with no real cause. It’s hard to know what goes on in a player’s head, but Little should almost take the exact opposite approach, making sure that he keeps the inside walled off and daring a pass rusher to try and take him around the edge.

The other persistent issue with Little’s technique was also on display Sunday – his tendency to put himself off-balance by punching before the defender is close enough for him to need to. Here. the two errors combine, as he initially oversets a little wide and then punches early, giving Bosa an easy chance to sidestep him and work back inside:

The other play that has been doing the rounds is the following one:

Here, Little again punches a little early, but this is made far worse by the fact that this coincides perfectly with the chip by Davis, which works only to drive the defender inside of Little’s punch and leaving Little completely out of the play. Chips, in general, are often counterproductive, and it is possible that Little’s mistake was made possible by his failure to recognize that the chip was coming – but it’s hard to say that Little put himself in a good position here; if this error continues, slightly different questions need to be asked.

However, what has maybe got less attention – it is 2020 after all and we are on the internet – is that Little had some really credible pass protection reps:

As a pass protector, Little has all the talent in the world – but he needs to make sure he is winning the mental side of the game as well. If he can focus on eliminating these self-inflicted injuries, he has a real chance of taking a step and becoming a genuinely good NFL pass protector – but as this season goes along, he is going to have to start making significant improvement in these areas. There are a lot of very talented ex-NFL players who were never able to put it all together.

This certainly wasn’t the game that Little would have dreamed of having; there are definitely areas he needs to work on, but he had at least as many good reps as he had bad – giving him a chance to get more experience against real-life NFL edge rushers should only help him in his development.

Scott’s appearance in the game was more surprising than Little’s – as a result, he was able to play without quite so many expectations. There were things to like: he flashes his run power on his first snap to help set up the Panthers’ longest run of the afternoon (he’s wearing #73):

Though, in order to be viewed as a genuinely good run blocker he – like Little – needs to improve his pad level; this really showed up on the following play in particular, where he is unable to keep the defender outside of him. His pad level negates any leverage advantage he might have started with:

However, while he did do some nice things as a run blocker, his weaknesses as a pass protector only became more apparent as the game went on. Unlike Little, he just doesn’t have the foot speed to counter speed rushes consistently, and on one of the Panthers’ failed third down attempts, Scott just gets run around:

And even when he wasn’t actually getting beat outside, his footwork was notably cumbersome and off-balance:

This had knock-on effects – by having to work very hard to cut off the edge, he had to sacrifice both lateral balance and pad level and was lucky not to get beaten inside for sacks on a few occasions:

This also led to his pad level being quite high, with him struggling to anchor at least once:

While he did a pretty good job of making sure that he kept the pocket as clean as he could for a couple of seconds each snap so that Teddy had a chance to get the ball out, it can hardly be viewed as a surprise that he was ultimately beaten for a sack on the Panthers’ final offensive play of the game:

Scott isn’t a hopeless cause – he could well be a much more effective if asked to play inside rather than on the edge, but it’s hard to say that there was much on Sunday to make one think that he can be a starting left tackle in the NFL.

Greg Little has flaws – and these are flaws that there is only going to be so much patience about him addressing – but despite these, his positive attributes showed up on tape as well on Sunday. If he can remove the mental errors or even work to make them less frequent, I think the Panthers should be able not only to function on offense but to grow.

While Scott certainly didn’t give a poor showing on Sunday, it’s hard to make a serious claim that the Panthers are likely to be better off going forward with him on the left side of the offensive line. The Panthers may well get Okung back this week, but if not, or if they are without him again this season, the evidence – and, if we’re being honest, the draft investment already made – suggests that Greg Little should be given the job without the need for a rotation.

Really, whatever the Panthers do from here, the rotation only works to destabilize the offensive line and create anxiety and uncertainty for the players involved – it really has to stop.