Crush The Combine: How Matt Rhule Is Process-ing The Offseason 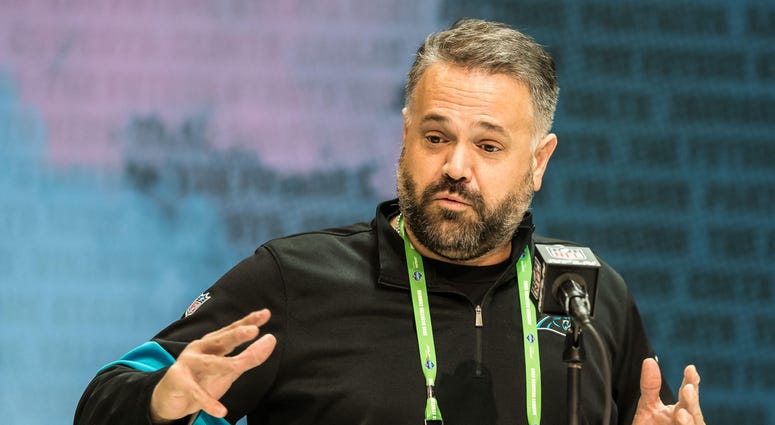 It’s no secret that Bill Belichick pays special attention to the three-cone drill at the NFL Scouting Combine.

There’s no doubt that the Bengals and Dolphins will be paying special attention to the quarterbacks this week in Indianapolis.

But what Matt Rhule, Joe Brady, Phil Snow and the rest of his coaching staff are looking for is a bit a mystery — and that’s exactly the way that the Panthers new coach likes it.

“One nice thing about being a first-time head coach is that no one really knows what our defense is or what our offense is,” laughed Rhule this week at the combine as he spoke to reporters. “So I’d like to keep that [mystery] as long as possible.”

And while that mystery may be an advantage to the Panthers, it certainly appears to leave the plans for the Panthers franchise over the next few months ranging from the mundane to the unbelievable, with Rhule unwilling to rule out – no pun intended – any options at this point. While he says he ‘absolutely’ expects Cam Newton to be on the roster and is excited about the opportunity to coach him, he stopped short of naming him the starter for Week 1, leaving the door open for a quarterback to be selected early. While there are players that he would deem ‘highly unlikely’ to be traded, the Panthers will constantly be picking up the phone and listening to any and all offers to improve their team – so nothing is off the table.

“We’ll do that forever, no matter who it is,” said Rhule. “I was teasing earlier, I would trade my son Bryant if it was for the right people.”

So will the Panthers be trading up for a quarterback? Maybe. Will they trade back and acquire more assets? Shrug. What position would the Panthers be targeting with the seventh pick? Nobody knows. Linebacker, defensive tackle, offensive lineman, quarterback, cornerback, edge rusher and others all could be on the table — the Panthers also met with wide receiver Jerry Jeudy, who could be in play as a top ten pick.

If you want to guess which way the Panthers will go in Rhule’s first draft – and his first foray into free agency, for that matter – that’s exactly what it would be…

The only folks that know are the folks wearing black and blue polos. And the scouting team, led by Marty Hurney, now know exactly what the Panthers new coaching staff wants.

Aside from revamping both the training room and weight room at Bank of America Stadium with the help of new strength & conditioning coach Jeremy Scott, the coaching staff sat down with the scouting team and talked about exactly what they want at each position, showing them on film specific traits and techniques they like and dislike – what John Matsko valued in a guard isn’t what Pat Meyer is looking for.

Eric Washington’s 3-technique lineman is not Phil Snow’s – and having everyone on the same page was an important part of getting the scouting and coaching team ready to ‘crush the combine’ – compartmentalizing his first time evaluating as an NFL head coach to ensure he doesn’t leave any stone unturned, no prospect question unanswered.

It’s all part of the process.

“When there’s alignment, when you have the same vision, when everybody sees things the same way, you have a really good chance to be successful,” said Rhule. “The coaching staff has sat down with the scouts and said, ‘Hey, look, this is what we’re looking for at this position and this is how they fit into our offense and our defense,’ because if you don’t have the same vision, they can go and get the best ‘a’ but we want ‘b’.”

“I’m a process-oriented guy, and that just sounds so cliché, I know. My wife says, ‘Matt, stop saying the process.'”


So Rhule and his staff will try his best to stay present in Indianapolis – to borrow a phrase from his predecessor, to ‘be where their feet are’ – and ensure that this part of the process goes correctly before moving on to the next step.

“He doesn’t try to bake it in the microwave, he takes his time and does it the right way,” NFL Network’s Daniel Jeremiah said of Rhule earlier in the week. “He’s eventually going to get all the people that fit in that building and that’s from a staffing standpoint to a playing standpoint, and I think they’ll have sustained success. I was happy that they gave him such a long-term deal so that he can do it the way it needs to be done.”

“When those things come up, you want to make sure you have the right answer, right? It’s one thing to sit there and say I’d trade up for so-and-so, I’d trade back for so-and-so, but I need to know who so-and-so is, otherwise you make a mistake,” said Rhule, staying true to his words and sticking with the combine when asked about trading up or down in April’s draft.

“I’m not really playing in Week 1 yet, that’s why my answers can sometimes come across a little bit boring,” said Rhule. “The only thing I can control is right now.  So I’m focused on the combine, I’m focused on free agency, then I’ll be focused on the offseason program and then the draft.”