Panthers Picks & Props for Week 2: Will Christian McCaffrey Build on his Monster Start? 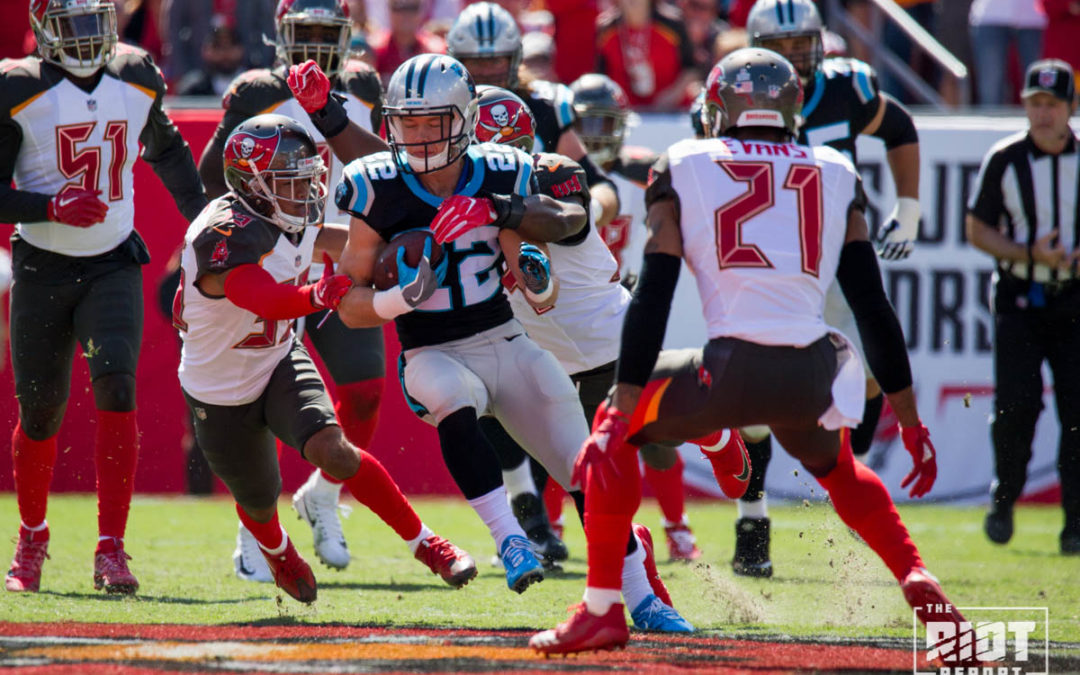 Welcome to the Week 2 edition Best Panthers Picks & Props, where our friend Cort Smith will run down his favorite Panthers-related bets and fantasy plays each week. Cort is a lead writer at RotoViz and the founder of Bet the Prop, a site specializing in the emergent player prop betting market. As of July 26, sports gambling is legal at sportsbooks in Cherokee, North Carolina – even though the sportsbook isn’t technically open up there, that’s not to mention the myriad of online options emerging – we’re not here to judge, we’re here to make you some money.

The Panthers come into Thursday Night Football as big -290 favorites to notch their first win of the year at home against the 0-1 Buccaneers. The -6.5-spread in favor of Carolina suggests a game script which has them playing from ahead, potentially leaning more heavily on the run game than they did last week in comeback mode versus the Rams.

That will come into play as we take a look at two of our favorite player props for this one, as well as a couple of suggestions for daily fantasy plays.

Last week, we went a perfect 2-0 in this space as Christian McCaffrey eclipsed 5.5 receptions, as predicted, and Greg Olsen fell just short of his receiving line. And we’re going right back to the McCaffrey well this week with our first prop pick and then doubling down on CMC in DFS. 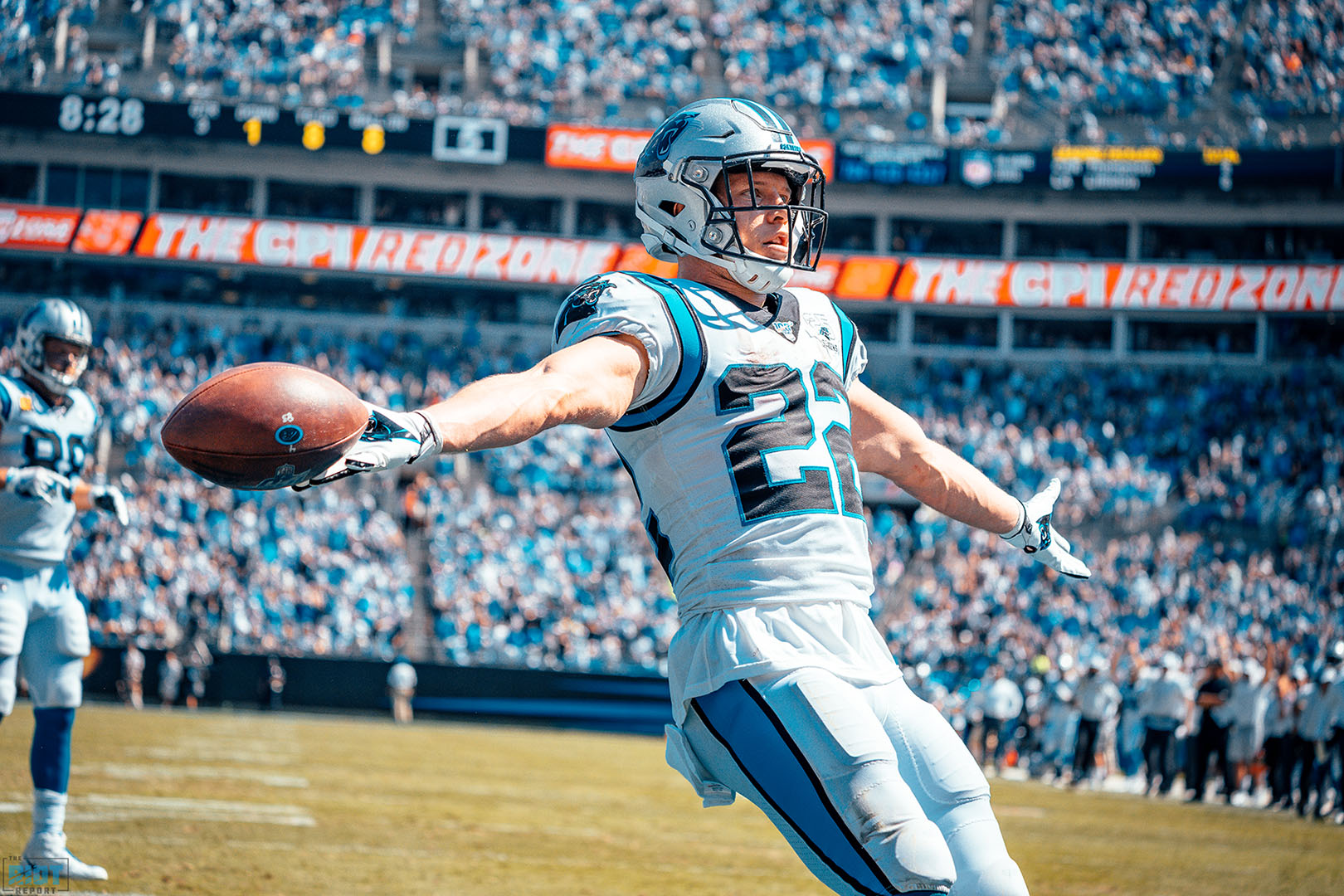 Bookmakers have made a massive adjustment on CMC’s expectations by cranking up his receptions total by one full catch over last week — now to up to 6.5.

However, the juice (the cut the house takes to book the bet) is working in our favor here, as we have solid odds at +100, better than the usual odds of -115. Price is everything in sports betting, and we’re getting an excellent one here.

A receptions total of 6.5 is a big number, but it’s one that is well within reach for McCaffrey. According to the RotoViz Stat Explorer, CMC has had eight or more receptions in five of his last seven games — practically speaking, it’s five of his last six games, since he barely played in a meaningless Week 17 game last year. 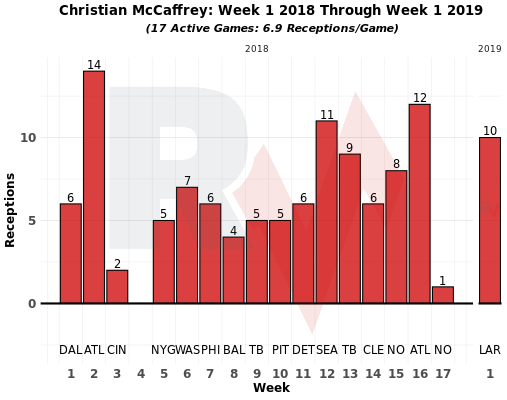 He reported receptions totals of nine and five in two games against Tampa Bay in 2018. He also played 100% of the team’s snaps in Week 1 against the Rams, looking locked and loaded as the workhorse we envisioned when we said he could have Ladanian Tomlinson-like season.

Look for McCaffrey to remain game script-proof and post another big day in the passing game. 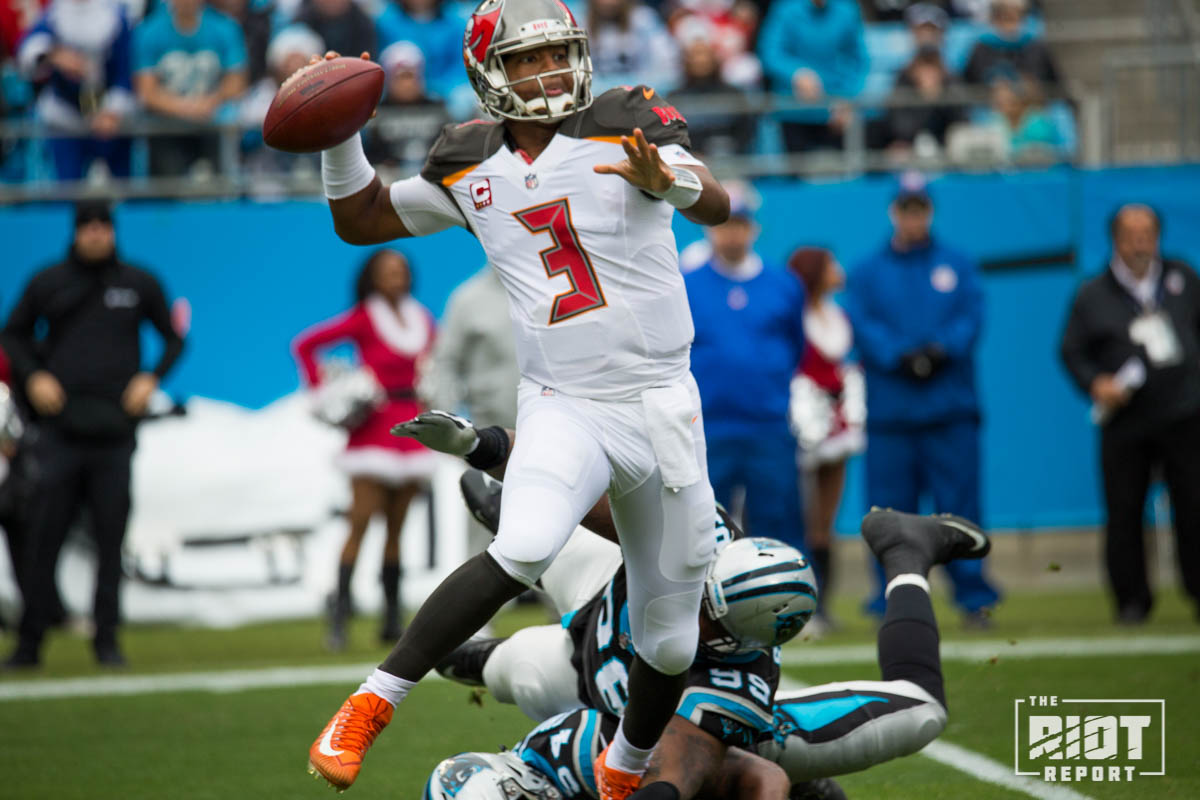 Winston has been the very definition of boom or bust, and that held true in his first start under new head coach Bruce Arians. 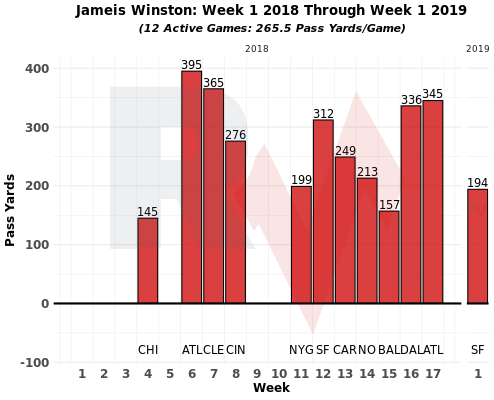 When he wasn’t busy getting benched last year, Winston either lit it up or stunk up the joint — there was little in between.

He tends not to travel well, either, averaging just 259 passing yards in his 28 career road games.

The way he’s playing, Winston may be at real risk of being benched at any moment, giving us a little extra equity on our under. 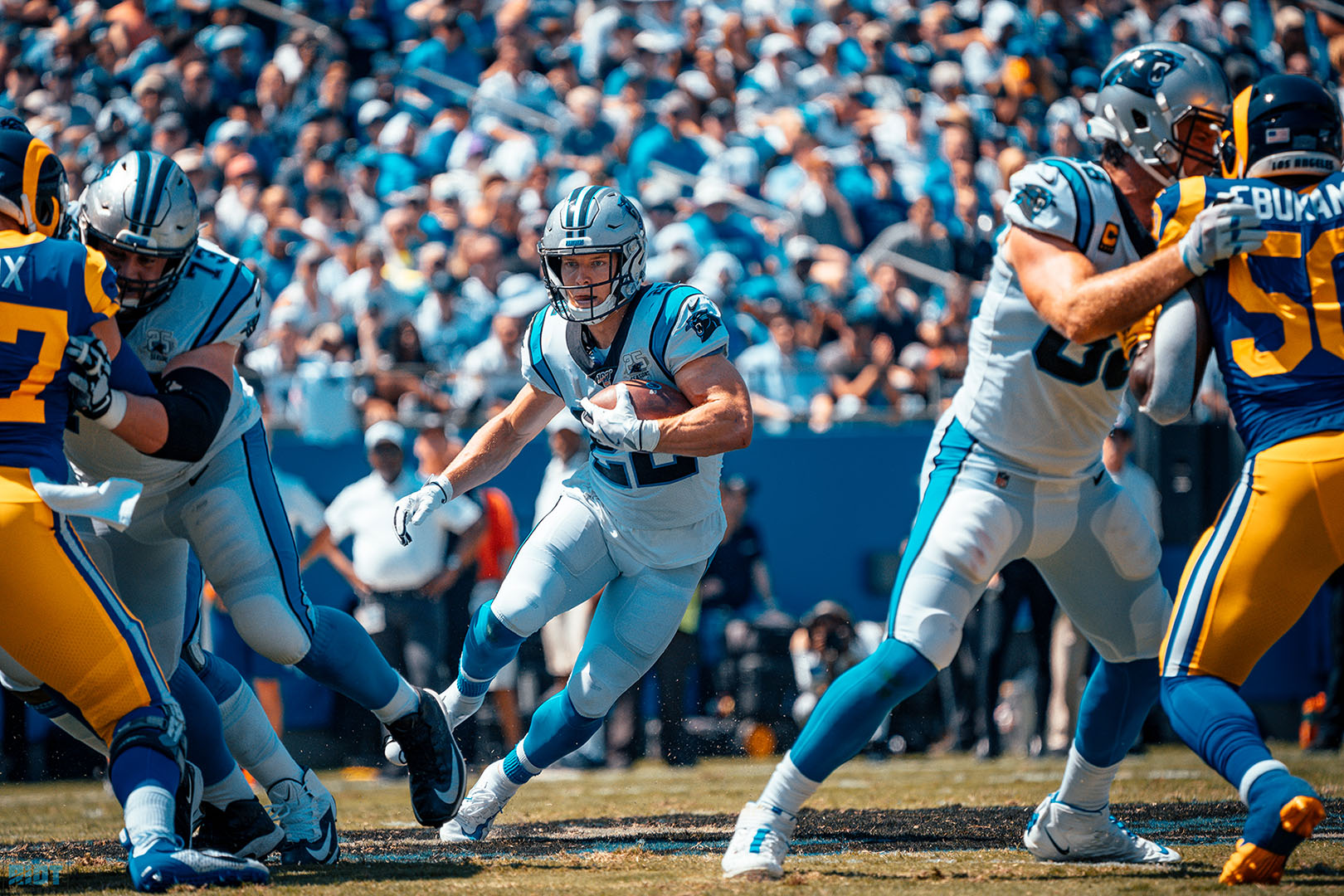 With a ton of opportunity to go with high-end efficiency, McCaffrey is a near must-play in cash games. He’s now the top-priced RB on the DraftKings slate, and for good reason:

He’s pricey, but his elite floor and ceiling demand consideration in any DFS cash game. 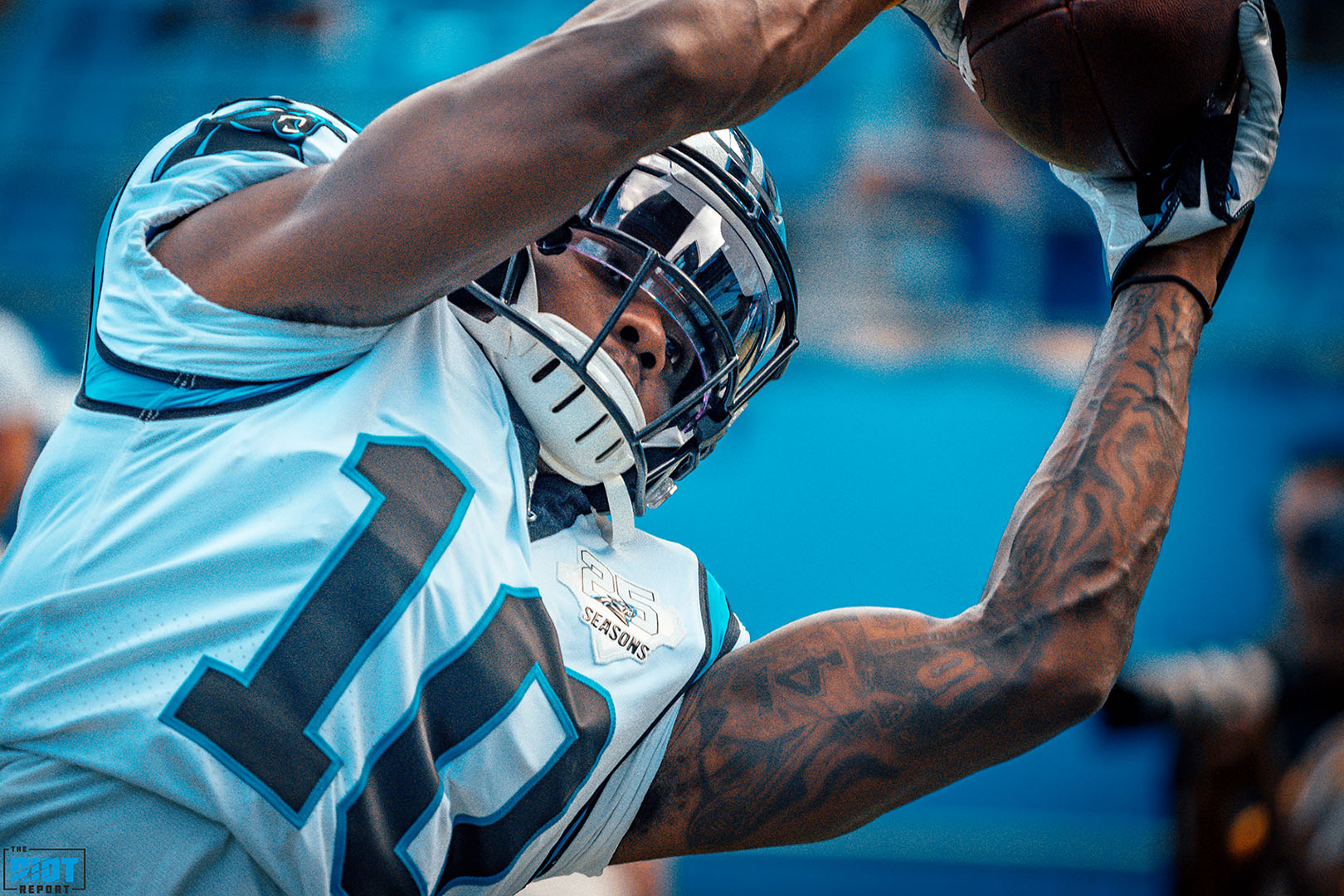 Samuel is a sneaky option against a leaky Bucs pass defense. He’ll be low-owned this week after a quiet opener of just 32 yards on 3 receptions, giving you some opportunity for leverage in big-field DFS tournaments.

The third-year WR had the best fantasy outing of his career against the Bucs last year, and in all has managed at least 15 fantasy points in four of his last 10 games. 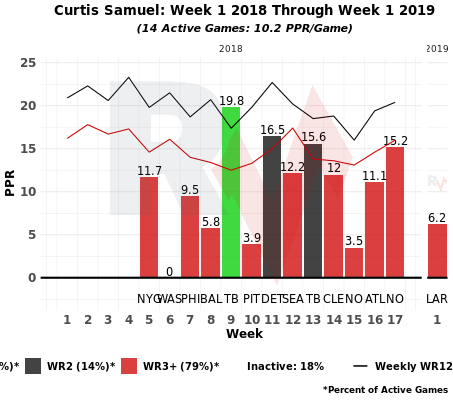 Samuel is going to break out at some point this year. Why not once again against the team he dusted for 19.8 and 15.6 fantasy points last year?

Be sure to get him into a few of your DFS tournament lineups Thursday night.