Fantasy Questions: Is Christian McCaffrey Worth the First Overall Pick? 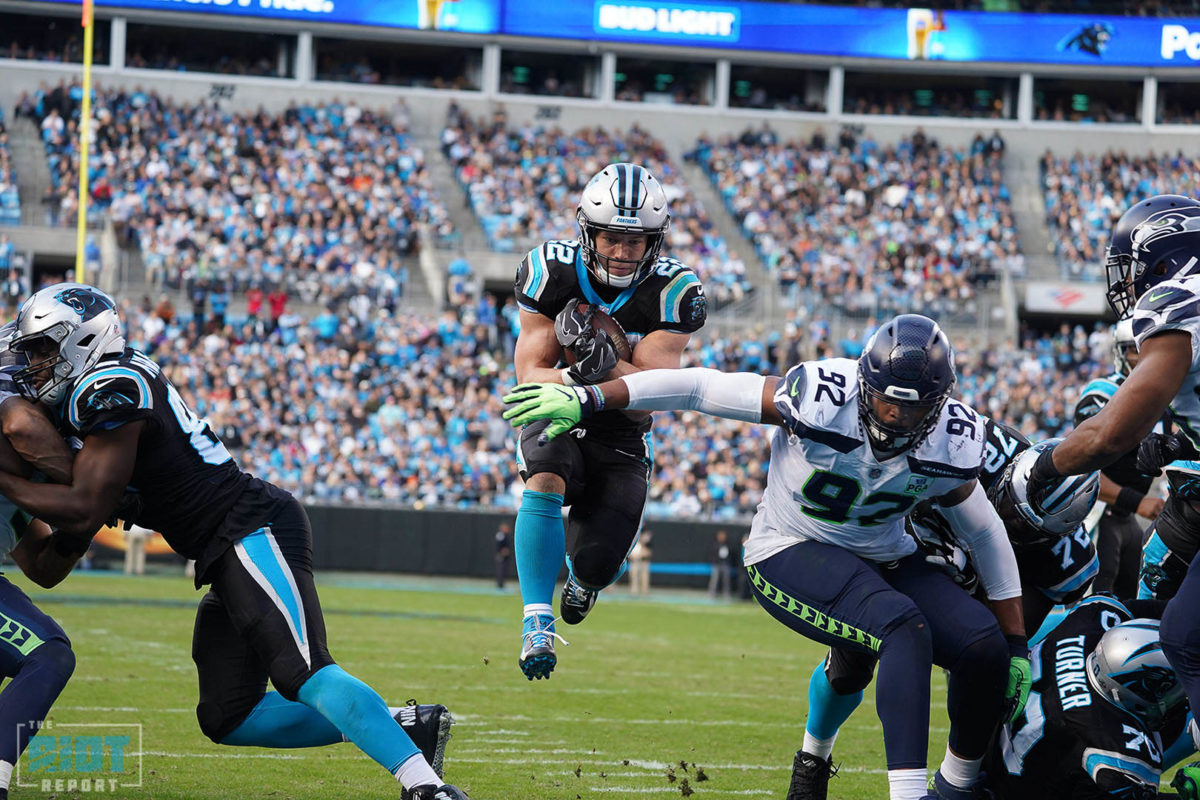 With football comes fantasy football – we’ve asked our good friend Cort Smith, writer and analyst for RotoViz, The Action Network and founder of Bet The Prop to weigh in on pertinent questions facing not only Panthers fans, but fantasy football owners who name their teams things like ‘Wham, Bam, Thank You Cam’ or ‘Kuech-in it Real’. He’s already looked at why he likes DJ Moore more than Curtis Samuel and why Cam Newton is a sleeper that can win your fantasy league – this week, we gave him a tougher question.

At this time last year, Christian McCaffrey was a consensus second-round fantasy pick, with only a few sharp drafters “reaching” for him in the first round.

One year, 380.5 fantasy points, and an overall RB1 finish later, McCaffrey is now a top-three pick in every fantasy draft.

The question is, should he be the first overall pick?

I’m not going to tease you with my conclusion here – the answer is yes.

Not only is McCaffrey a can’t-miss option at first overall, but he’s also positioned to have one of the greatest fantasy seasons of all time, up there with the immortal LaDainian Tomlinson – if things fall right.

What causes me to make such an audacious claim? Actually, it’s not that bold considering we already saw McCaffrey put up Tomlinson-like numbers in the back half of last season. 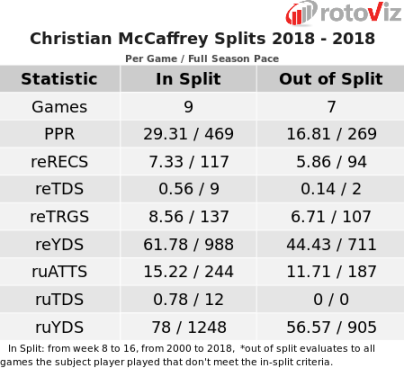 Over the first seven games of 2018, McCaffrey was on a 269-point pace, but over the last nine games (the in-split column of the above table):

Related:   Playing It Both Ways: Which Defensive Panthers Would Be Best On Offense?

Tomlinson posted the greatest fantasy season since the turn of the century with 473 points in 2006. McCaffrey’s second-half pace was less than a TD short of that number, and even a little bit more early-season volume would’ve been enough to put the Panthers stud in some truly rare company. As it was, he had to settle for just the ninth-best fantasy season since the year 2000.

The biggest difference in McCaffrey’s usage came around the goalline. Here’s how he was utilized inside the 10-yard line last year:

After being all but ignored around the goalline through the first seven weeks, his overall opportunities skyrocketed by 383% in the last nine games.

Part of that increase may have been due to wanting to protect their next-best goalline weapon in Cam Newton, who was nursing an injured shoulder for most of last year. And now the coaching staff is making noise about wanting to reduce McCaffrey’s goalline role. I could see scenarios where he is spelled for a few extra snaps over the course of the year, but taking away high-leverage looks from one of the best players in the game to hand off to a lowly-drafted rookie like Jordan Scarlett or a fullback doesn’t make a lot of sense.

At least they had C.J. Anderson to hand off to in the early part of last year. This year, the depth chart behind McCaffrey going into the season is even thinner.

That 22-TD pace we saw from our man in the back half last year isn’t sustainable, but 14 to 15 total TDs is a reasonable outcome — he scored 13 last year while basically being ignored in that part of the field over the first half of the season. 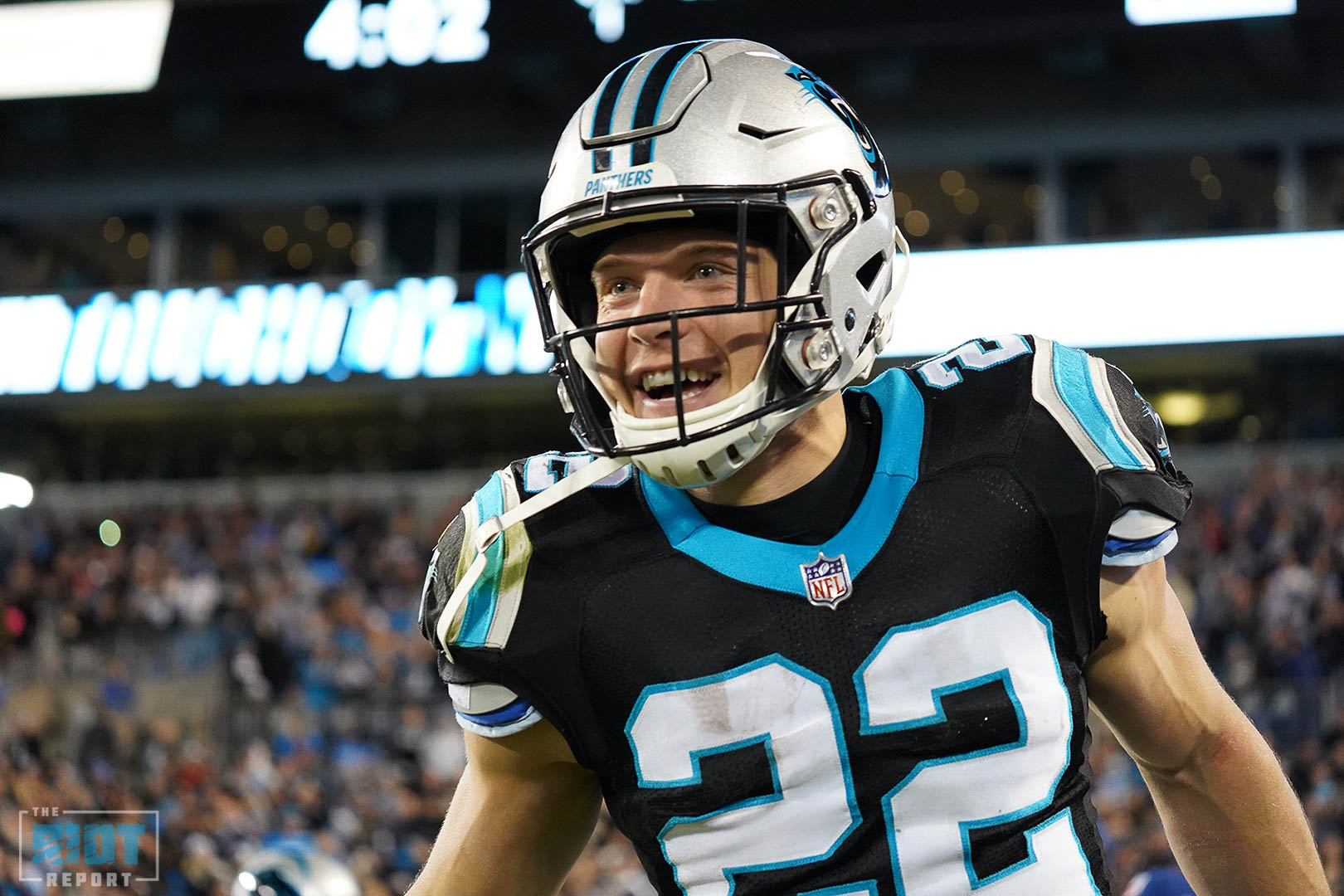 The decision on who to take first overall realistically comes down to McCaffrey and Saquon Barkley. While Alvin Karama is clearly a special talent, the Saints have always been a two-RB team under Sean Payton, and after bringing in free agent Latavius Murray to replace Mark Ingram, that’s unlikely to change.

Let’s look at the projections from a few trusted sources to see who gets the edge. I gathered the projections for both McCaffrey and Barkley from RotoViz, Mike Clay at ESPN, and Fantasy Pros and compared them.

When we average out the projections, McCaffrey gets a slight edge of just 2.5 points, although two of the three sources give the nod to Barkley.

It’s close, and you can’t really go wrong — both McCaffrey and Barkley are incredible talents and are going to get fed in every situation.

But a case can be made that it’s McCaffrey who has the slightly safer floor and just as much upside. Here’s my case:

We already witnessed all the reasons why McCaffrey can outscore Barkley in fantasy because last year, he did it by 19 points – it’s no stretch to suggest he can do it again this year.

That’s why you should take him #1 overall.