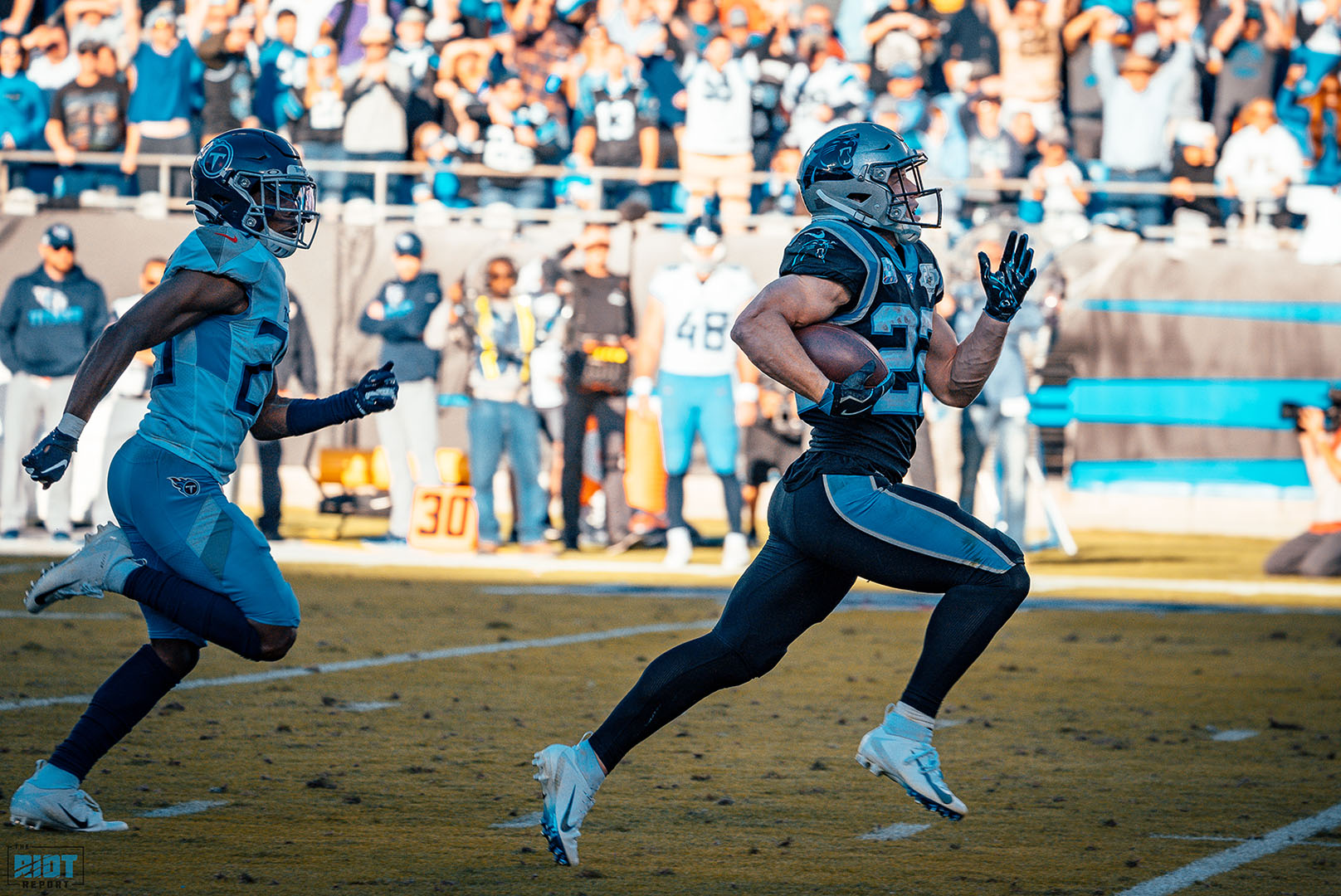 Christian McCaffrey is the first running back to legitimately be part of the MVP discussion in the second half of the NFL season since Adrian Peterson’s 2012 season.

While there are a lot of reasons for this, as well as the possibility of a wider discussion about how you could possibly judge who or what an MVP is, what is certainly clear is that the fact that he now has four 40+ yard rushing touchdowns on the season – while it would be unfair to say that his numbers on the ground are pedestrian without those four plays – 623 yards at 3.9 yards-per-carry with six touchdowns through eight games is still pretty good – they have certainly been the difference between him being a good running back to arguably the best in football. Let’s take a look at his latest big play:

A lot of football is just a matter of numbers, and having the right number of players in the right place at all times. What is clear immediately pre-snap is that on the left side, the Titans don’t (forgive my scrawl):

The other thing that comes across in this image is that every player on the field is in the box – the Panthers have essentially lined Moore up as a tight end on the left side and have both Manhertz and Olsen outside the right tackle with Armah wide as a fullback. This means that with Allen likely not being used as a runner, the Titans should be able to keep an extra player on either end to account for the fact that the fullback could go left or right while still being able to have one player in every gap.

The issue is, as can be seen in the image, the Titans have put an extra two players over the left side, meaning that the Panthers have a seven-on-seven on the right hand side and have a chance to isolate a defender on the left side of the line. While the Titans will still have an extra man to make the tackle, the play is designed so that McCaffrey will have always get past the line of scrimmage at this point with a chance to make a man miss. Everything the Panthers do from this point on is all just trying to capitalize on a mistake the Titans have already made, and it’s worth keeping that in mind.

But how did the Panthers make them pay?

So there are several things of note here. First, the Panthers crash Moore, Daley, Paradis and Turner left to compact the left side of the Titan’s defensive line and create as big a space as possible outside the right guard. Second, they look to use Manhertz and Moton to seal the inside edge by blocking the right side linebacker and safety and, in so doing, leaving the far-side corner unblocked. They also have Armah kicking onto the front-side corner, Olsen reach-blocking the end and GVR pulling into the hole in front of McCaffrey to block the front-side linebacker.

All this should leave the front-side safety free to make the tackle as indicated, but given that he starts just over ten yards downfield and will have to hesitate slightly in case of play-action, the expectation should be that McCaffrey has already got past the chains before he is able to make the tackle.

All this can be seen developing nicely at the point where McCaffrey gets the ball:

Here, you can see almost all of that into action, with Manhertz and Moton doing a great job of sealing the inside and GVR primed to make the block on the linebacker. Olsen is making a key block here on the front side, but if you are looking for a way that this play might be stopped, if the edge defender is able to win against Olsen and get inside, forcing McCaffrey outside, the front-side linebacker might be able to make a play on the ball-carrier. However, Olsen makes a great block, and with GVR primed to make the block on the linebacker, you can already see this play going for a big gain.

However, what can’t be seen at this point is how this play ends up in the end zone, and like with the other long runs the Panthers have had so far this season, both against the Cardinals and the Jaguars, the difference between a big play and a huge touchdown is yet another defensive mistake.

So what did the Titans do wrong from this point on?

Well, it sort of can be seen going wrong in the previous image. The back-side linebacker can be seen already looking to get front-side of Manhertz – where he probably should have started pre-snap – but what can also be seen is that #24 is not shifting across with him, and the result of this can be seen all too clearly at the point where McCaffrey breaks the line:

Once again, it’s worth noting the quality of Olsen’s block, as this is what allows McCaffrey to get through the line untouched. Contrastingly, Armah isn’t doing a great job of applying for more playing time as he gets well wide of his defender, thereby allowing a clear inside pursuit lane – which fortunately the defender wasn’t able to capitalize on. You can also see how even if the Titans’ hadn’t had an issue with their back-side pursuit, the safety wouldn’t have been able to make the tackle until McCaffrey was more than five yards down the field, and even then he would have been tasked with making a difficult in space.

What leads to the long run, however, is a combination of two things: the linebacker has done a great job of pursuing to the ball, getting to the front-side of Manhertz, but the safety hasn’t shifted across with him to get front-side of Moton, and so a huge gap is created between Manhertz and Moton right down the middle. This run was meant to go right, but McCaffrey is able to read the over-pursuit of the linebacker and the resulting huge hole down the middle:

The linebacker getting outside Manhertz has the effect of walling off the safety from the inside lane as well, and so McCaffrey is left with a clear path to the end zone. Put it all together and you can clearly see the inside rushing lane emerging as the play develops:

And because this is Christian McCaffrey, it goes the distance:

Again, plays like this are the result of multiple factors. The Panthers have a great play drawn up, they execute it well and the Titans make a huge mistake. Without the first and second, this play might never have got past the line of scrimmage, but the third is also key in letting this play get to the end zone. The Panthers run game so far this season has relied a lot on long plays, and while they aren’t completely in control of generating these plays, there is absolutely some truth to the idea that if you keep knocking at the door, eventually it’s going to open.

This time it practically fell off the hinges.