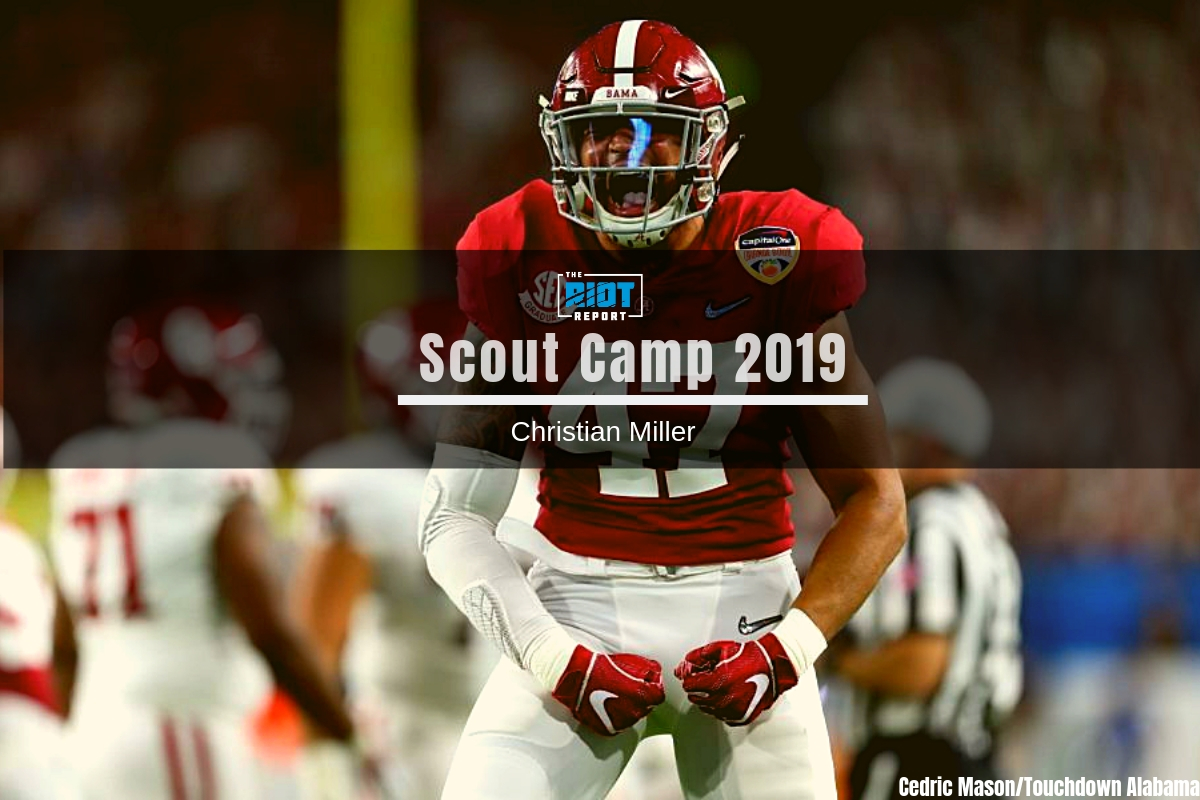 Miller wasn’t used hugely as a run defender at Alabama – their ridiculous depth allowed them to rotate their defensive linemen a lot – but he still put enough snaps together to allow for some evaluation of his ability in this regard. As with the passing game, his speed shows up on tape, especially as a weakside defender where he was able to close on plays from behind:

And he was able to combine this quickness with little flashes of hand usage to work effectively as an inside gap penetrator:

While he certainly didn’t dominate at the point of attack as a run defender, he did do a consistently good job of getting his hands up, and showed pretty nice hand placement with his long arms – allowing him to keep blockers at bay while working to maintain gap discipline:

Though he could have done a better job of keeping his pad level down – too often, he was able to get driven backward even while in his gap because he wasn’t able to compensate for his lack of bulk with good pad level:

And, at a fundamental level, even when he does get his pad level sorted, at 247 pounds, he is going to be too light to regularly feature as a base 4-3 defensive end at the point of attack, though it is clear that this is something the Panthers are likely to be moving away from:

Despite this, when he is able to get a couple of steps to gear up and keep his pad level down, he has enough power that teams shouldn’t be able to target him every time he steps on the field outside of obvious passing situations:

As a run defender, Miller, like Burns, is never going to be dominating offensive tackles at the point of attack, but he uses his long arms well to stay in his gap and has the quickness and hand usage to be a threat as a weakside defender or as a gap penetrator. Miller isn’t a complete, all-around run defender, but he can be a decent-to-good one if used in the right way.

The other thing the Panthers have made it clear that they are planning to do more of in 2019 is dropping their edge rushers into coverage, and while Miller might not quite have the elite movement skills and speed of a Brian Burns, he was arguably the most well-developed coverage player in the 2019 edge class. Like Burns, he was asked to drop into zone as a stand up rusher at times:

But he was also asked to play the flat as an Ohio State-style nickel linebacker:

And was also used as a conventional inside linebacker in coverage at times:

Alabama also used him in man coverage at times, both against tight ends:

While it is hard to really judge how he will fare against NFL tight ends and running backs from these clips, what he does show is the speed and core movement skills to be an effective coverage player regardless of the extent to which the Panthers look to use him in this regard.

As a player, Miller is not without areas he needs to work on; given his size, there are certainly some limitations to how he can be used at the NFL level, but he shows enough in terms of his speed rush, core hand usage and movement skills to be good value in the fourth even without the prospect for development – given what he can become as a pass rusher with some more work on his hand usage and inside game, this is really a great value pick for the Panthers.