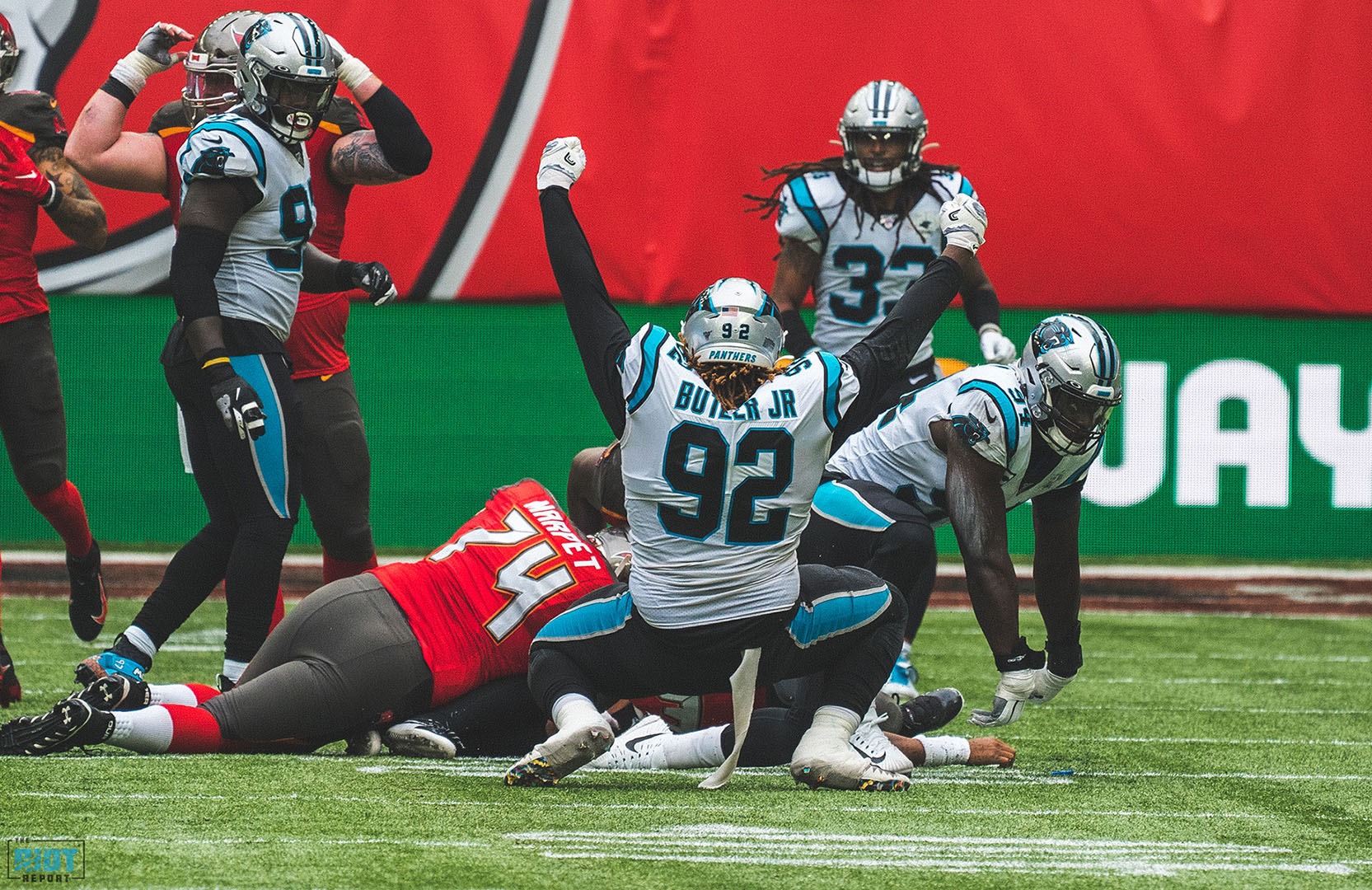 From a statistical point of view, Vernon Butler had the best game of his career against the Bucs in London with two sacks and two forced fumbles, one of which was recovered to stop a potential touchdown drive by the Bucs in the red zone. Even as one of the biggest proponents of Butler’s game over the past four years, it would be hard for me to pretend that he has lived up to his draft status throughout his time in Carolina.

“I think it’s a little bit more of a feel for what we’re doing, how we’re doing it. We’ve done some odd-front stuff that seems to benefit him, gets him off of being a one and three, now he ends up being a five. The guys he’s rushing with seem to be guys that also kind of suit him a little bit better. Look at how he works with Bruce, with Brian, and Mario. When you have those kind of guys, they’re creating things, forcing the quarterback to step up, you got any kind of push coming up inside, you can get to the quarterback. That’s kind of what’s happened for him. I’m happy for Vernon.”

However, entering his contract year, Butler has, superficially at least, been one of the players who might have benefitted the most from the Panthers’ move to more of a 3-4 defense. So then, was his two sack performance against the Bucs a flash in the pan, or was it a sign of a Vernon Butler finally being used to maximize his value?

Throughout his time in Carolina, Butler has been used primarily as a 1-tech, lining up between the guard and the center and, in the run game at least, being asked to anchor against double teams to allow the players around him to make plays. This is something he has done a decent job of for the most part, but as the Panthers found with Star Lotulelei before him and as the Giants are experiencing with Dexter Lawrence now, it is hard for a first-round defensive tackle to justify his draft status when his major role is eating double teams.

There were times on Sunday when Butler was used in this way still, with the following being an example, and while this certainly isn’t bad play by him, this doesn’t really add much value to the team compared to someone like Kyle Love – who is equally capable in this role:

The other way he has been used historically in the run game is as 2-tech, lined-up over the guard and asked to work laterally to fill his gap in order to create chances for the players behind him to make plays. This was also something he did at least once on Sunday, and while he wasn’t actively bad in this role – he could, for example, do with lowering his pad level to improve his balance – this is also not something that really maximizes his impact:

However, where he did show real promise on Sunday in the run game was when he was lined up in a gap, either the A gap or the B gap, and asked simply to penetrate into that gap and force the play inside of him or bounce the runner out wide. Both times he was asked to do this he ended up in the backfield:

What he does so well here is that he combined his natural explosiveness with solid hand usage, in the first instance, getting his inside arm underneath the center allowing him to drive all his power into going around his blocker. In the second instance, he shows this same quickness with a well-worked strike-and-swim to work around the guard.

Neither of these plays impacted the box score directly, both in both cases Butler gave a blueprint for how he can be used to add value in the run game. Butler isn’t a significant enough piece of their defense to build the entire structure around his skillset, but what this does do is give an indication of how the Panthers should inform their rotations when it comes to Butler.

Up Next: Rushing The Passer