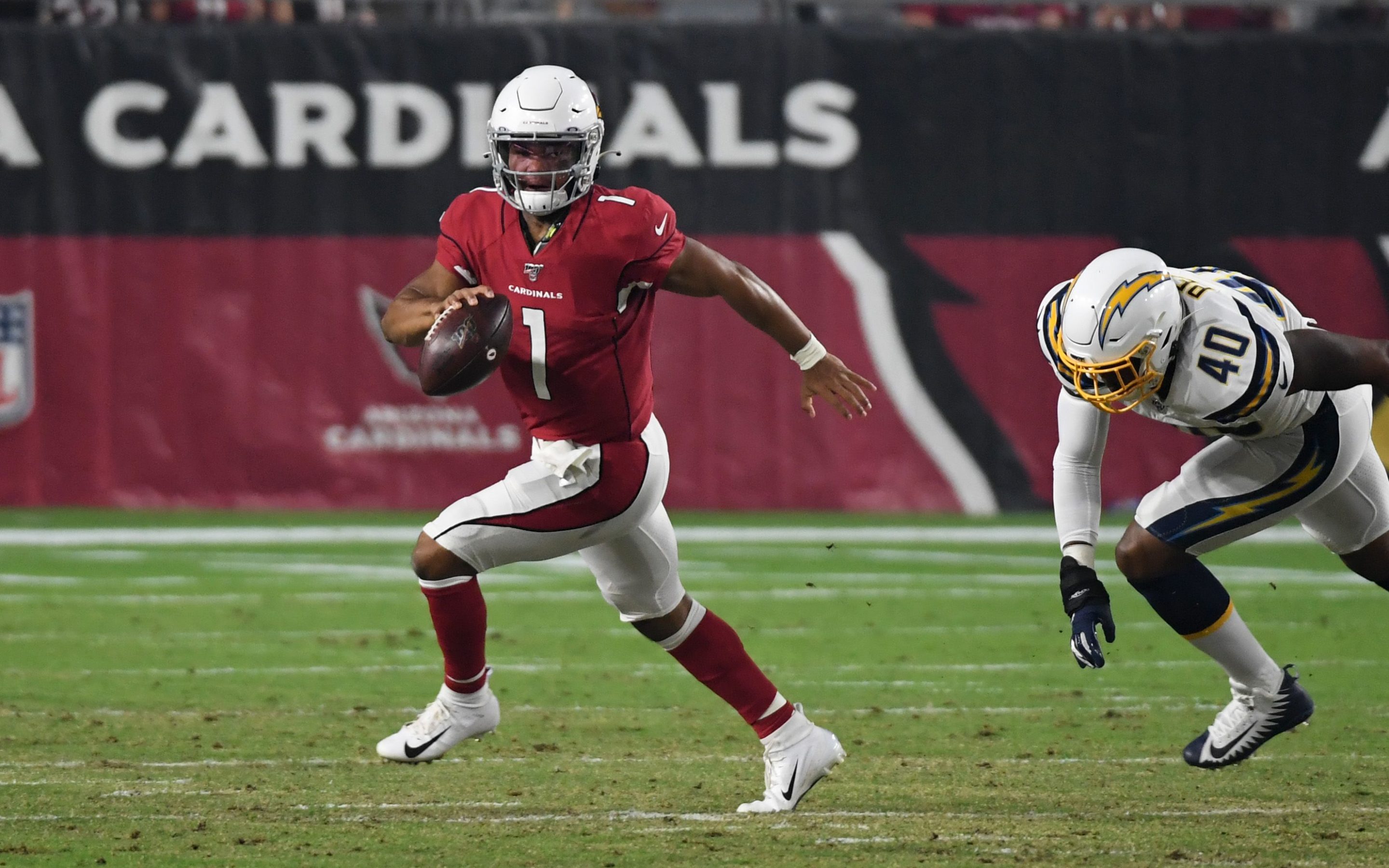 It’s been a bleak start to the season for the Panthers, but there’s no time to think about that and the spectre of starting 0-3. They’ll head to Phoenix for their first road game of 2019, taking on a familiar foe in the Cardinals on Sunday. Each week, I’ll tell you what needs to be the first thing the Panthers are prepping for – in Week 1, it was Aaron Donald. Last week, it was Mike Evans. For this week’s edition of Job Number One, we’re here to look at rookie quarterback and #1 overall draft pick Kyler Murray.

Debuting in the NFL in Arizona along with former college coach Kliff Kingsbury, Murray polarized many in the NFL circle due to his 5-10 stature, but the Cardinals took a chance on him, trading previous first round starter Josh Rosen to the Dolphins in the process. Murray has thrown for 300 yards in each of his first starts while dropping back to pass a total of 103 times, which leads the NFL through two weeks into the 2019 season.

Indeed, the Cardinals’ 94 pass attempts are the most for any NFL team this season, and they rank fourth in net passing yards per game (328.5). On the other hand, the Panthers defense has allowed 186.0 net passing yards per game while producing four sacks and one interception. Passing offenses have combined for an 82.4 passer rating against Carolina.

Something has to give, but stopping Kyler Murray on his home turf won’t be so easy. With that in mind, let’s take a look at what the rookie has to offer that spells danger for the Panthers.

One thing Murray has going for him is his arm talent, which – of course – lends itself to deep passing accuracy. Coming out of college, I was impressed by his ability to push the ball downfield with incredible precision, and on this play against the Ravens…

…He does exactly that, firing to Christian Kirk’s back shoulder on this pass.

The placement on this throw is extremely impressive for a rookie going up against a stud defense like Baltimore’s. He looks off the middle of the field before firing this, managing to get it to Kirk before the pressure gets to him.

In overtime against the Lions, we can see another example of Murray’s potential as a deep passer. The pass protection in Arizona has held up better than expected so Murray’s signature display of mobility hasn’t been needed too much. Here, he uses the time given, cycles through his reads and finds Larry Fitzgerald open down the field.

The placement of this pass is beautiful, and the precision toward the sideline means it’s put in a spot where only Fitzgerald can make a play on it. In addition to his deep passing, Murray is used on rollouts, can utilize his scrambling ability, and also does a snap clap – unusual at the NFL level (more unusual when he did it at home against the Lions in Week 1). That’s a lot to keep in mind for the Panthers defense coming into the desert.

But you might be asking; Does Murray have any weaknesses? Well, any rookie quarterback is coming into the game with flaws. No rookie is expected to be an elite level starter right away, and there’s a reason the term “growing pains” is constantly used. So, in that sense, Murray does have some weak points.

Take this play, for example.

Here Murray is planning on targeting Fitzgerald, lined up as the H-back (you read that correctly).

The route of the top receiver (right of the formation) runs a skinny post route down the field. Combined with Fitzgerald’s route developing longer than that of the skinny post receiver, and the Ravens defense doesn’t notice him until it’s almost too late.

With an accurate throw, Fitzgerald is most likely home free. The issue is the interior pressure from the Ravens gets to Murray, so instead of stepping into this throw, he goes off balance and the pass is under thrown, forcing Fitzgerald to stop and make a sliding catch.

Murray’s mechanics are not well-rounded yet – that’s to be expected from a rookie quarterback just starting to adjust to the professional level. The more discussed criticism of Murray’s game has been in his height, which many say will affect how many passes are batted at the line of scrimmage.

There is a point to be made with that.

Murray’s height at times prevents him from getting this ball over the defensive linemen at the line of scrimmage, and it goes without saying a taller quarterback generally has it easier when avoiding this problem – Brock Osweiler is an exception.

Despite these criticisms, Murray has also shown incredible strokes of genius, such as this play below.

Once again, Fitzgerald is the target on this play. I’ll let the photos describe what’s going on here.

While the throw initially looks inaccurate, Murray’s placement forces Fitzgerald to adjust, thereby taking him away from the presence of the high safety. As such, this is a great throw – and an even better decision – from the 22-year old rookie.

And stopping Kyler Murray’s passing ability doesn’t shut him him completely, as his ability as a runner is obviously a looming threat. The Panthers have guys up front like Brian Burns and Kawann Short – if he plays – who have played well and are hungry for some pressure, but going up against a highly mobile dual threat quarterback provides a potential challenge and inconvenience.

All in all, Murray has exciting deep passing ability, plays in an offense that gives him impressive route combinations, is of course a dangerous runner, and can make incredible plays out of nowhere. In a game where Cam Newton isn’t expected to play, Murray’s talents give the Panthers just another thing to keep their hands full.

Sending interior pressure and affecting Murray’s mechanics can help Carolina contain the young rookie, but doing so could be easier said than done.