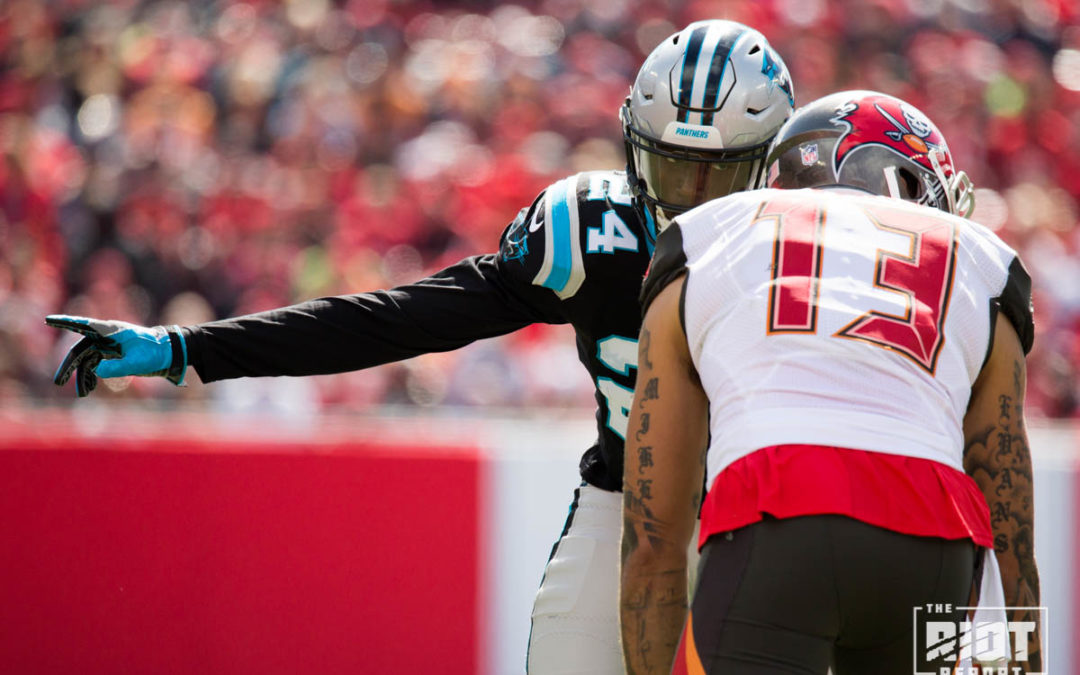 Each week, the Panthers have to do a lot on both offense and defense in order to win their matchup – but in most cases, there’s one thing that needs extra attention. That’s why Johnny Kinsley created the ‘Job Number One’ series – before you start gameplanning the rest, make sure you’re accounting for the biggest threat; last week, they had to contain Aaron Donald, which they did, holding the reigning Defensive Player of the Year to only one tackle and one QB hit.

Week 1 of the 2019 season did not go as planned for the Panthers, but on a short week there’s no time to waste about the performance at home against the Rams. On Thursday Night, the Buccaneers are welcomed into Carolina with someone the team is already familiar with in new head coach Bruce Arians.

From a skill position perspective, Arians inherits a very talented offense. Guys like DeSean Jackson and Adam Humphries are now on different teams, but the receiving corps still includes a good deal of talent such as Mike Evans, Chris Godwin, Cameron Brate, and O.J. Howard.

For this week, the top priority for the Panthers should be Mike Evans.

Evans is one of the best receivers in the league; in 2018, he put up a career high 1,524 yards on 86 catches while also adding eight touchdowns into the mix – if he’s able to cross the 1,000 yard mark this season, he’ll become only the second player in NFL history to record 1,000 or more receiving yards in each of their first six seasons – the other is Randy Moss.

However, in the two games against the Panthers last season he was shut down, only putting up five catches for 64 yards.

Interestingly enough, this isn’t a recent development either. In ten career games against the Carolina Panthers, the Bucs receiver has been limited to 566 yards and three touchdowns on 41 catches. That’s extremely impressive – obviously Ron Rivera is very familiar with Evans’ skillset.

Evans is a big receiver; at 6-5 and 235 pounds, he has a massive frame and brings nuanced, excellent route running to the equation in addition to sensational ball skills at the catch point.

Against Carolina, on the other hand, Evans’ skillset has been denied in recent outings by James Bradberry. Bradberry has been a quality corner during his time in Charlotte, but it seems like he’s been especially good against Evans.

With that in mind, let’s take a look at why exactly Bradberry has been a thorn in a top receiver’s side.

As you can see in these shots there’s plenty of hand contact between Bradberry and Evans. Bradberry is right there with him using the press man technique.

At this moment, it would seem that Evans gains the upper hand and is in position to make a huge play at the catch point.

…and disrupts the pass with perfect execution.

As you can see early in the snap, Evans does his best to wipe away Bradberry’s jabs, but the 6-1 corner stands his ground with a fantastic play.

This time, Bradberry is shadowing Evans in the slot.

Evans makes a nice outside move right off the snap…

…and creates plenty of separation for a great first down play. Or so you’d think.

Bradberry does a sensational job of recovering and catching up with Evans, getting inside his receiving window just a little before the pass (which was errant) is thrown.

Bradberry gets fooled by Evans’ inside move, but the key was how he’s able to increase his acceleration and catch up with the big receiver. In the first showdown between the two last season, Bradberry held Evans to one catch for 16 yards on 10 targets.

On this play, Evans is back out wide, with Bradberry playing a little softer but still having his sights on his foe.

Evans goes into his break on this out route…

…but Bradberry is once again there to spoil the fun.

This is a catch Evans is expected to make and it goes through his hands. Still, Bradberry deserves plenty of credit for finding a way to disrupt Evans’ concentration with his outside hand. The acceleration he gets from his push off and the timing of his disruption are enough for the receiver to bobble this pass and let it fall to the turf.

Finally, let’s take a look at this play from the second matchup at Tampa Bay last season.

Immediately, Bradberry presents Evans with a jab to his outside shoulder. The two are neck to neck…

…until Evans pushes off in an attempt to haul in the 50/50 ball. His efforts, however, are not enough, and he gets called for offensive pass interference.

Let’s see how this looks in full motion.

Even if the throw is a little more precise, this is still outstanding coverage on Bradberry’s part. His success dealing with Evans in press was fantastic last season, and these two games were among the very best of the corner’s career.

It goes without saying that Bradberry is needed against Evans once again. Chris Godwin is another receiver that could have a breakout game, but Evans is public enemy #1 in this regard. It’s up to Bradberry and Donte Jackson to limit the Buccaneers receiving corps in a critical NFC South showdown at home, and I have faith Bradberry can do his part against Evans on Thursday Night.