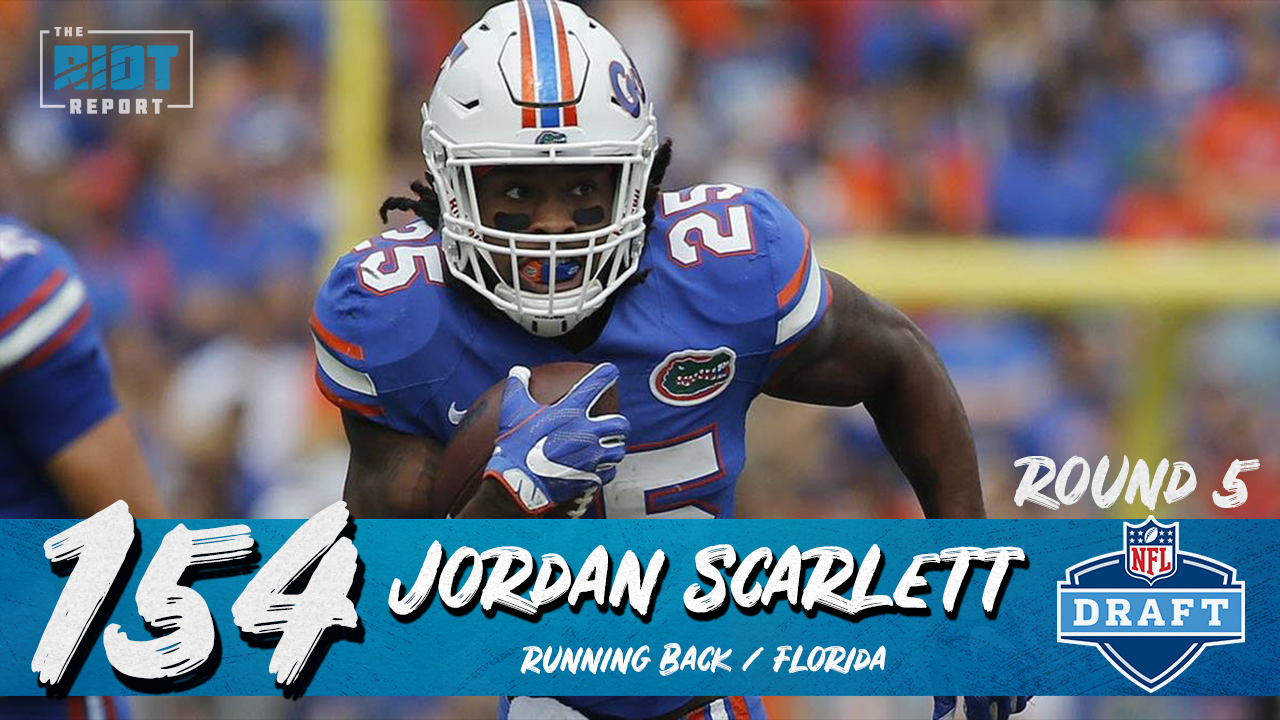 The Panthers entered the draft this week with multiple needs and as they move into the later rounds, they’re slowly checking them off.

Edge rusher – Check and double check with Brian Burns and Christian Miller both joining the fold.

Left tackle – The Panthers traded up in the second round to get someone they considered in the first round, Greg Little.

And now they’ve crossed backup running back off the list as the Panthers selected Florida running back Jordan Scarlett with the 154th pick of the draft – the fifth rounder rushed for 776 yards and five touchdowns in his final season in Gainesville while splitting carries with Lamical Perine; he also started eight games in 2016 and rushed for 889 yards, the most for a Florida freshman or sophomore running back since 1995 as he picked up five yards per carry.

Pro Football Focus credit Scarlett with the most missed tackles in the SEC (48) that season.

Scarlett had his share of issues while in college, between a misdemeanor arrest for marijuana that cost him the bowl game that season and a credit card fraud scandal that affected Scarlett and eight other Gators as they were arrested, placed on suspension from the team and then on probation after the players used credit cards other than their own to add money to their account at the university bookstore.

One of the players affected was Browns wideout Antonio Callaway, who declared for the draft after being suspended for the entirety of the ’17 season and was selected 105th overall by Cleveland in 2018 – Callaway had 586 yards receiving and five touchdowns as a rookie.

The experience of being forced to sit out a year affected Scarlett – and certainly caused him to fall down draft boards as a result.

“It was a learning experience for me,” said Scarlett. “It made me realize how much football meant to me – I kind of took the game for granted, sacrificing it to do something stupid. I told a lot of teams that I’ve learned from my mistakes and it definitely won’t happen again.”

“A lot of teams weren’t sure and didn’t want to risk all that money into a player that would potentially get into trouble; but everything happens for a reason and God makes no mistakes – I’m just glad to be a Panther.”

The 5-11, 208 pound running back said that he has been in contact with the Panthers throughout the draft process and the team thought he was a great fit, even going so far as to say that they might have been interested in the Fort Lauderdale native, who played in high school with Brian Burns, after the season he was suspended had he declared for the draft as Calloway did.

The reason the team showed that kind of interest is because of the skillset and how it complemented workhorse back Christian McCaffrey, whose 91.3% snap count in 2018 was the most in the league by a wide margin for a running back, causing a focal point of this offseason to be finding someone to lighten McCaffrey’s load.

“It’s just about finding the right type of mixture and I feel like me and [Christian] will be a great mixture, a great one-two punch,” said Scarlett, who is used to splitting carries. “Including Cam on top of that, it should be great. Christian’s more of a shifty back and also likes to get the ball on the perimeter, so they get him the ball as a receiver and stuff like that and I can get those tough yards in between the trenches and take some of the wear-and-tear off of his body.”

“I’m a very physical runner and I like to run downhill.”