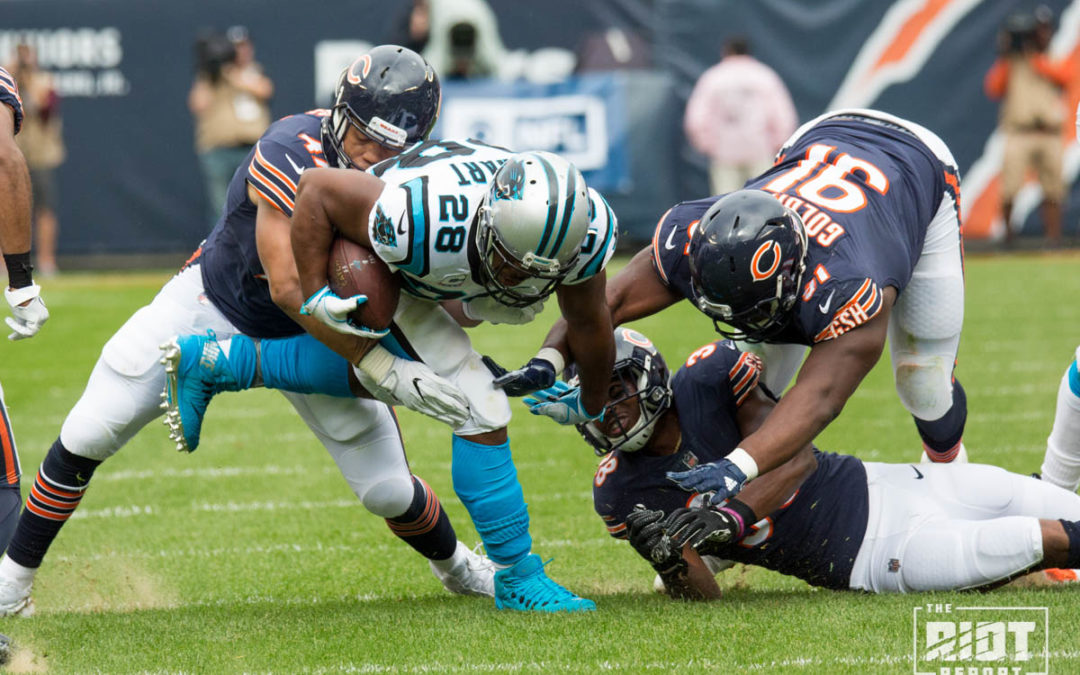 After the Carolina Panthers’ 17-3 loss in Chicago on Sunday, head coach Ron Rivera said that the game came down to three plays: the Bears’ two defensive touchdowns and the long pass to running back Tarik Cohen to set up the Bears’ only offensive points. While the Panthers technically would have won the game 3-0 had none of those plays happened, the failure to win the game lies more in the Panthers inability to put drives together, something that arises from a lot more than three mistakes; a lot more.

Fifty mistakes, to be exact.

Of course, these mistakes ranged in severity from the marginally unhelpful to the spirit-destroying, but what these articles aim to get  across is how the failures both on Sunday and so far this season have been the result of consistent errors that run through every level of the offense. While bad luck is undeniably a factor on a game-by-game basis, the consistent inconsistency of the Panthers production goes much, much deeper.

This first installment will focus on the running game and how seventeen of the Panthers’ designed runs put them behind the chains to varying degrees. While a three yard run might not look like a failure, it is. Every time a team fails to gain four yards on an offensive play, they increase the yardage they have to get on the subsequent plays. Of course, such plays are an inevitability, no team will rush the ball for four yards every time, but failing to see plays which fall short as an issue is denial, plain and simple.

A number of times on Sunday, the Panthers put themselves behind schedule in the running game simply through failing to check out of likely-doomed run plays. From the outside, it is hard to tell whether this is Cam Newton failing to recognize defensive formations, offensive coordinator Mike Shula not putting sufficient checks in place or even failing to explain where checks are needed. Whatever the reason, every time the Panthers ran into a stacked box they were relying on one defender being unable to make a play against the running back. On the following play, the leads to an unblocked defender being able to simply wrap the running back up for no gain:

Of course, other things go wrong in this play. Daryl Williams seems completely unaware of what he should be doing, but even if he been able to block the first free defender there is simply nobody to account for Bryce Callahan (37). The Panthers committed this most basic of errors multiple times against the Bears, especially on first downs, some of which can be attributed to the notion that teams need to establish the run. While a run game is useful in forcing defenders down into the box, the entire purpose of doing so is to allow for more room to throw the ball; opting to run the ball against a very defensive look, a strong run game are meant to generate negates any benefit that such looks are meant to create.

Related:   Film Room: How D.J. Moore's Stood Out Against The Jets

The play where this was most egregiously true was on the failed fourth down conversion. Cam Newton has been extremely potent as a runner on short fourth downs throughout his career, and so the Bears are effectively going all-in to stop the run. The opt for a cover-zero look, with all defenders either over a receiver or in the box. What this means is that there is no help for any coverage defenders, but that the Bears have a defender for every blocker and one free to get to Newton. Part of the decision here has to be the yardage; had this been a 4th-and-inches it would probably have been worth trusting Newton to make some forward progress, as he did, but this is a long 4th-and-two. A check to a quick pass play likely would have been successful.

Had the Panthers checked to a pass, with Funchess running an inside slant, there would have been no help for the corner who would likely have allowed the easy completion for a first down. Instead, Newton is forced to bounce it outside into the arms of a completely unblocked linebacker. Cam should have known to check out of this play. Unless he is actively ignoring his offensive coordinator, it should have been made extremely clear that the play should be checked to a pass in case of a cover zero look. This is multi-layered incompetence, even the running backs should have looked over and asked if he was sure he didn’t want to check to a pass!

Such plays are maddeningly frustrating due to the ease with which they can be avoided. In all, there were seven plays on Sunday where the Panthers ran against a stacked box with no clear plan of how to avoid the free defender; five times on first down, one on second and long and once on fourth down. Seven plays might not seem like a huge amount, but that accounted for one drive completely lost and five times when the Panthers started a set of downs by avoidable putting themselves behind schedule.

As described in a look at the Panthers Running Game Woes Against the Eagles, when designing running plays it is important to look to generate a crease; some would even say essential. While this wasn’t a huge problem on Sunday, the above play is an example where the play call seems to simply be for everybody with no design for where the running back should go, with a predictable result. Where the Panthers showed more consistent issues on Sunday was in the use of pulling guards. In the run up to Super Bowl 50, the Panthers used pulling blockers to great effect; but on the following two plays which are essentially the same, the pulling linemen lead to a minimal gain at best.

In both cases, the edge defender is left unblocked and the first pulling player is tasked with sealing the edge. The issue with this is that if the defense remains disciplined, the edge defender is able to collapse in and close off the running lane. In both cases, better success would likely have been had by bouncing the run outside, especially as the second pulling player does the same. Neither of these plays or the other pulling play that was stuffed are far from being successful; the core concept is generally sound, but the plays fall short in the details. Generally, the Panthers’ running plays on Sunday were quite well designed, but the mistakes build up into more significant issues.

Do Your Job, Or Don’t

A failure to execute running plays tends to come down to a failure to make blocks or to identify where to run; the Panthers had some of each on Sunday. There was only one example of an offensive linemen allowing a play to be blown up by failing to make his block when tackle Matt Kalil slipped on a stretch play; but there was another where the breakdown was more fundamental. On a read-option play, Newton correctly reads the end and take the ball outside for what should be a reasonable gain:

However, Dickson and Funchess, who are tasked with blocking the two outside defenders, completely whiff on their blocks and allow for the easy tackle by Kyle Fuller. Errors like this are easily avoidable and frankly land at the feet of the players in question. It almost looks as if Funchess believes the play to be a Read Pass Option, but then remembers too late that he is meant to be blocking somebody. These basic mental errors are unavoidable in the individual instances, but consistent mental errors, as have been seen in recent weeks, raise questions about coaching at a fairly fundamental level.

The above play should be the making of dreams for offensive coaches. The defense opt for a two high safety formation with three defenders split wide. The Panthers merely need to block the six in-box defenders with their six blockers and Stewart will have acres of space to rumble into. This play should be a chunk play but as Dickson makes the block on the linebacker, Stewart looks to hesitate before bouncing the ball outside. Had Stewart simply kept his head down and drove forward he would likely have come close to a first down at the very least, but his decrease in speed allows the defender to take him down with a simple arm tackle. At the end of the day, the running backs have to make plays when given the opportunity; three times on Sunday the Panthers fell short due to running back error.

The final execution possibility is a failure to be in the right place at the right time. On the previous read-option play, Cam reads the end and McCaffrey should be able to scoot inside for a first down. However, Larsen fails to come off his initial block and get to the linebacker on the second level, allowing him to get a clean hit on McCaffrey. None of these errors are unforgivable, but in totality lead to a stagnation of the offense which puts them consistently behind the chains and forces them into making riskier and riskier decisions.

The final running play that went wrong for the Panthers was the turnover on the toss play. It comes down to very simple, avoidable things: Samuel should absolutely catch that toss and when he fails to, there is no excuse for the Panthers not being the team to recover it given their positioning. While this was the one run play Rivera pointed to as being one of the plays that lost the Panthers the game, it was merely the one where the mistakes led to a tangible advantage for the Bears in terms of points. Every one of the run plays shown here and many others that were omitted for the sake of brevity hurt the Panthers on Sunday.

Check out more misery below as we delve into the passing game and the coaching mistakes that were made on Sunday.

Why The Loss To The Bears Came Down To A Lot More Than Three Plays, Part II: The Passing Game

Why The Panthers Loss To The Bears Came Down To More Than Three Plays, Part III: The Rest