Job Number One For Week 5: Hold Off Calais Campbell 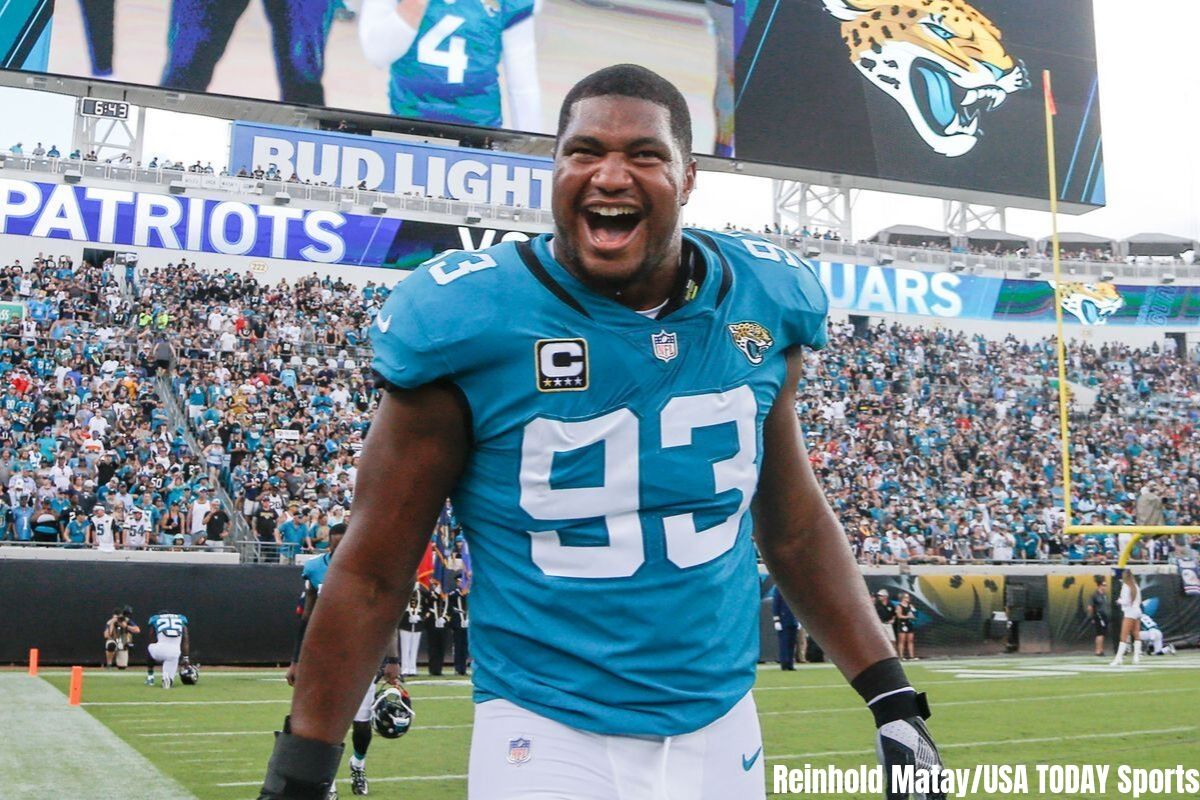 The Panthers return home on Sunday to face another breed of feline in a catfight to see who can improve to 3-2. As such, we’ve got another fresh Job Number One entry to discuss for this Week 5 affair. In the past, we’ve warned the Panthers about Aaron Donald, Mike Evans, Kyler Murray and Deshaun Watson – this week, we’re flipping back over to the defensive side of the ball.

You probably expected a piece on the emerging rookie Gardner Minshew – but instead, I wanted to focus on a star from the Jaguars defense. When you think of the Jaguars, they’re been associated with a powerful pass rush in recent years. This season, they’re in the top six for sacks (13) and quarterback hits (29) while also producing the second most pressures (53) and the third highest rate of pressure per dropback (0.33).

In his third season with the Jaguars and at the age of 33, interior pass rusher Calais Campbell is the face of Sacksonville. Campbell is still killing it, and he enters Week 5 with three sacks, four tackles for loss, and eight quarterback hits.

On a defensive front that includes players such as rookie Josh Allen and Yannick Ngakoue, it’s Campbell that’s emerged as the leader of that line since he signed with Jacksonville in 2017. In a similar way to the challenge Aaron Donald possessed in Week 1, Campbell is another trial the Panthers’ interior offensive line must withstand to help out Kyle Allen.

Don’t take Campbell’s age as a negative – the old man can still dish out an impressive arsenal of pass rushing moves. Let’s observe what exactly he can do and why limiting his impact will be Job Number One for the Panthers this week.

Much of Campbell’s production on the season comes from his Week 3 performance against the Titans, where he had three sacks, four tackles for loss, and five quarterback hits. It was a hell of a pass rushing display, so there’s no shortage of film to take from it.

One such example comes on this play below, and although he did not get a sack on this snap, he was responsible for allowing Marcell Dareus and Leon Jacobs to split it.

That’s a grown man swipe move by a top pass rusher on Rodger Saffold, who has had a highly underrated career with the Rams. This play is a perfect example of his value on a play despite it not showing up on the stat sheet.

This next play doesn’t result in a sack but it shows up on the stat sheet as a QB hit, and it’s a big pressure play as the Titans are in the red zone at this time.

There’s no doubt that Campbell’s pressure affected how quickly Marcus Mariota got rid of this ball, and this nearly results in an interception. The speedy burst and quick counter chop from the elder statesman of Sacksonville are both pleasing to watch.

At last, Campbell posts a sack. Truth be told, he actually had three against the Titans, but this one stands out as his most impressive from the night.

It should also be mentioned that this occurred on the very next play after the previous clip…on a fourth down, no less. The right guard anticipates a bull rush from Campbell but he leaves Jamil Douglas in the dust and devours Mariota.

Let’s change scenery for this next play in the Mile High atmosphere of Denver. Campbell had no sacks in this game but did produce two quarterback hits, one of which was yet another spectacular display of pass rushing excellence on his part.

This is one of my personal favorite pressures of the season so far. I love the amount of care and meticulous detail Campbell puts into this snap; you can tell he’s really passionate about his role in Jacksonville and the team’s faith in him has paid off tremendously.

Finally, Campbell of course has experience against the run which, coincidentally enough, is something the Panthers excel at with Christian McCaffrey. Let’s take a quick look at what he can provide as a run stopper.

Calais Campbell’s age hasn’t slowed down his skillset nor has it drained his athleticism. His fresh set of moves and consistent pressure has him playing on a level many pass rushers in today’s game would feel honored to reach. Time has not taken away from the art of his game, and that’s something the Panthers offensive line – especially missing Trai Turner and perhaps starting Dennis Daley at left tackle – needs to keep in mind on Sunday.

The guard play needs to be on its A-game against this stud. Containing him doesn’t guarantee stopping Yannick Ngakoue and Josh Allen as well, but holding off Campbell will make things much easier for the Panthers offense throughout the showdown in Charlotte.