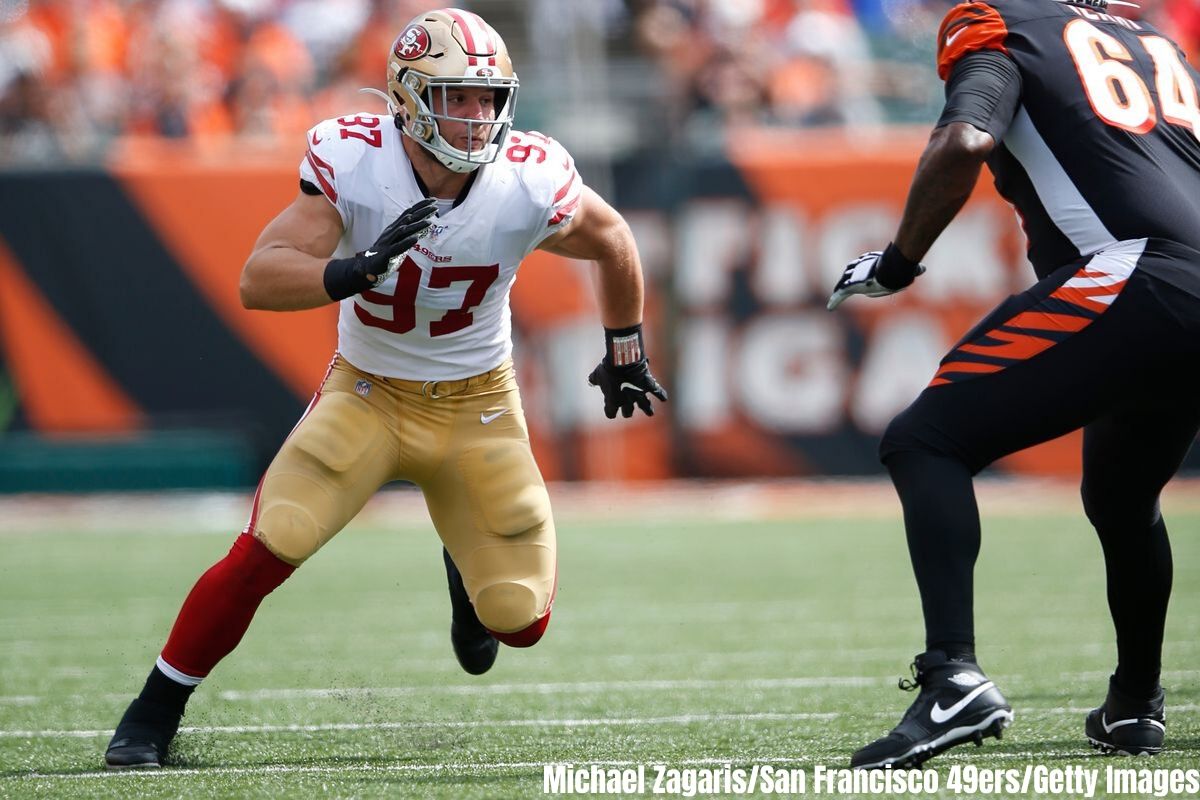 Each week, Johnny Kinsley takes a look at which player he thinks presents the most pressing issue for the Panthers – whether it’s been Mike Evans, Calais Campbell, or Kyler Murray, each week, there’s a key to stopping the opponent – making sure you eliminate the first option should be Job Number One.

The Panthers return from their bye with a huge test waiting for them in the bay area. The 6-0 49ers, as evidenced by their record, have had little trouble winning games this season thanks to an efficient offense and a defense that has taken a huge step up in 2019. In 2018, their defense ranked dead last in takeaways with only seven of them. The two interceptions they had all season was a new NFL record low since the merger in 1970. They were also in the bottom half of sacks that season with 37, tied for 8th fewest.

In 2019, the defense is tied for the fourth most takeaways with 13 as well as seven interceptions, already eclipsing the amount they had last year. As for the sacks, they have 20 of them, tied for the fifth-most in the NFL despite playing one fewer game than almost a third of the league.

The improved play of the secondary and pass rush comes from the front office’s successful efforts to complement each unit with quality. The biggest addition just might be the phenomenal rookie edge rusher Nick Bosa, who, along with Brian Burns, is building a hell of a resume in the first half of the 2019 season.

In his first six games Bosa has four sacks, eight tackles for loss, 10 quarterback hits, a forced fumble and a fumble recovery. For most rookies this is a decent season, but this has been Bosa’s first six games in the league. There was no doubt he was going to be good, and he’s managed to live up to some pretty lofty expectations.

Bosa’s high level of play has helped turned the 49ers defense into one of the league’s most feared, making him Job Number One for the Panthers this week. Let’s not waste any more time and break down what makes Nick Bosa such a dangerous pass rusher.

In Bosa’s debut against the Buccaneers, he had a sack, a tackle for loss, and three quarterback hits on Jameis Winston. This was done despite not even starting the game. On this rep, he goes up against Bucs left tackle Donovan Smith, and he makes sure Smith remembers his name.

Bosa trips before he can sack Winston, which leads to a completed pass, so the execution isn’t perfect. But the high counter move Bosa uses is terrific and it showcases his incredible athleticism.

Next, let’s move to the Buccaneers’ last play from scrimmage, where Bosa’s presence had a huge impact on the results.

The counter move by Bosa is crazy, and this should be of concern to the Panthers’ left side of the offensive line, especially with the injuries the left tackle position has faced and rookie Dennis Daley likely to get the start. Bosa’s aggressively quick hands make it seem too easy and Donovan Smith is left in the dust.

But it was Week 5’s Monday Night game against the Browns where Bosa truly made a statement for himself. He sacked Baker Mayfield twice while hitting him five times, becoming one of only six players since 2006 (when QB hits were made an official stat) to put up at least five QB hits in a game during his rookie season.

Panthers fans can sleep well knowing they aren’t on this list for the wrong reasons, but need to wake up to the level of play Bosa was playing at against the Browns and learn from the mistakes Cleveland made.

Putting a tight end on Nick Bosa is foolish, but that’s for another topic. Bosa’s pressure here is more than enough to force Mayfield to get rid of this way before he intended, and this leads to an underthrow that Richard Sherman snags out of the air.

For this next play, the Browns wisely got a left tackle to go up against Bosa this time. Unfortunately for them, the results were the exact same.

This play highlights the level of chemistry the 49ers pass rush has with the secondary. Like the Panthers – a pass rush consisting of stars like Bosa, Dee Ford and DeForest Buckner makes it easier on the secondary and vice versa. Here, because no one is getting open, it grants Bosa a little more time to pressure Mayfield and eventually strip-sack him.

Finally let’s look at this play from the 49ers’ torrential downpour of a matchup at the Redskins. Bosa had a sack, a quarterback hit and four tackles for loss in a sloppy 9-0 victory. The tackle for loss below was easily the most impressive of the afternoon

Bosa’s read on this play is remarkable. Granted, this play might’ve worked if he was the least bit accounted for by the right guard, but if Bosa doesn’t sniff out the shovel pass, this could be a first down on a 3rd-and-short.

Nick Bosa’s deadly arsenal of pass moves, combined with his speed and ability to sniff out the short game easily explain the massive success he’s had in his rookie season. Much like Week 1 against the Rams, this is a game where Christian McCaffrey needs to be involved, though with the combination of Kwon Alexander and Fred Warner, the 49ers have a more talented linebacking corps than their NFC West buddies (as well as a more talented pass rush).

On the road, I expect a great deal of pressure on the Panthers offense and especially the offensive line – specifically coming from #97.